A generation disrupted Highlights from the 2019 Deloitte Global Millennial Survey

​Disruption is driving economic growth and opportunity—and unsettling younger workers. Deloitte's 2019 survey shows millennials and Gen Zs are increasingly pessimistic and mistrustful of both their careers and the world around them.

Around the globe, disruption is driving economic growth, expansion, and opportunity. But millennials and Generation Z are feeling increasingly unsettled and pessimistic about their careers, their lives in general, and the world around them. They appear to be struggling to find their safe havens, their beacons of trust. As a result, these younger generations are instigating their own brand of disruption, both inadvertently and intentionally.

We explore this year’s survey at full length in The Deloitte Global Millennial Survey 2019.

The survey questioned 13,416 millennials across 42 countries and territories, along with 3,009 Gen Z respondents in 10 countries. Among the key findings:

Why are these young generations filled with distrust instead of optimism? Perhaps it’s because they’re perpetually caught in the crossfire of societal, political, and economic commotion.

Chief among the influencing factors is likely the economic recession of the late 2000s. At one end of the spectrum are older millennials who were entering the job market as the crisis unfolded. At the other end are Gen Zs, many of whom have spent half their lives in a post-crash world.

In the United States, millennials who entered the labor market around the recession, or during the years of slow growth that followed, experienced less economic growth in their first decade of work than any other generation.1 They have lower real incomes and fewer assets than previous generations at comparable ages, as well as higher levels of debt.2 The cumulative effect has altered a wide variety of financial decisions.

The complete impact goes deeper than economics. Unlike the postwar 1950s—which were characterized by international cooperation, a baby boom, and economic expansion that benefited most—the past decade has been marked by a steep rise in economic inequality, a reduction in societal safety nets, insular and dysfunctional governments, increased tribalism fueled by social media, radical changes in the contract between employers and employees, Industry 4.0 technologies that are redefining the workplace, and personal technologies that make people both more connected and more isolated.

The impact of myriad, radical changes to our daily lives has hit younger generations hard—economically, socially, and perhaps psychologically. Through this survey, this “generation disrupted” is telling us that continuous change and upheaval have created a population that is different at its core. But young people are also providing valuable clues about how society’s institutions can respond to those differences in mutually beneficial ways that could increase trust, generate positive societal impact, and meet their high expectations.

Each year, we ask millennials about global societal challenges and their personal concerns to see how they’re trending. This year, we’re seeing a palpable deterioration of optimism and a wide variety of both macroeconomic and day-to-day anxieties weighing on their minds.

Among 20 challenges facing society that most concern respondents on a personal level, climate change/protecting the environment/natural disasters topped the list. And it wasn’t close. Twenty-nine percent cited it as a worry, seven points more than the next-highest concern: income inequality/distribution of wealth. By comparison, seven points separated concerns two and nine. 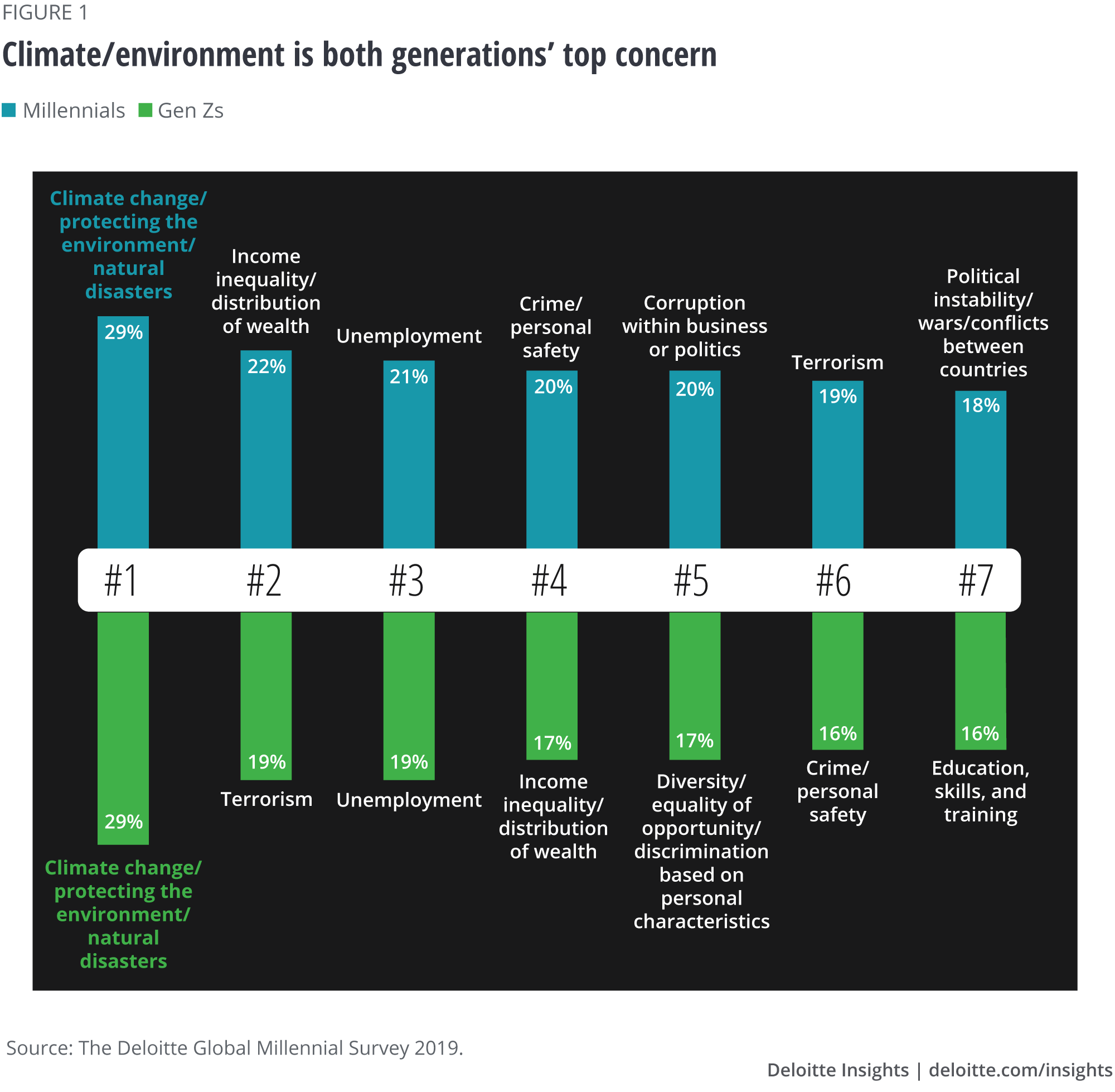 It’s worth noting that terrorism, crime, and war all placed in the top seven, suggesting that in these uncertain times, personal safety is a front-of-mind concern.

Indeed, every generation is shaped by its circumstances, and millennials are no exception. They’re no less ambitious than previous generations: More than half want to earn high salaries and be wealthy. But their priorities have evolved or at least have been delayed by financial or other constraints. Having children, buying homes, and other traditional signals of adulthood “success markers” do not top their list of ambitions.

Instead, travel and seeing the world was at the top of the list (57 percent) of aspirations, while slightly fewer than half said they wanted to own a home (49 percent). They also were more attracted to making a positive impact in their communities or society at large (46 percent) than in having children and starting families (39 percent). Interestingly, women (62 percent) are more interested in seeing the world than are men (51 percent).

Earning a high salary and being wealthy ranked second (52 percent) among ambitions. But when asked whether their ambitions were achievable, the respondents ranked this aspiration in the last position, with 60 percent of respondents seeing it as a possibility. Generally, though, millennials believe their ambitions are within reach. Two-thirds who want to reach senior levels in their careers believe that’s attainable. Seven in 10 who want to see the world think it’s possible. Three-quarters who want to buy homes are confident they’ll be able to. And 83 percent of those desiring families don’t believe barriers will prevent it.

Download The Deloitte Global Millennial Survey 2019 to take a closer look at the results of this year’s survey.

Learn more about millennials and the future of work

A generation disrupted has been added to your bookmarks.

A generation disrupted has been removed from your bookmarks.