The amount of money invested in InsurTechs during the first half of 2020 remained remarkably robust at nearly $2.2 billion, despite the economic fallout and general uncertainty prompted by the COVID-19 outbreak, according to data collected by Venture Scanner and analyzed by the Deloitte Center for Financial Services.

InsurTech insights by the numbers

Concerns that the economic fallout of COVID-19 might prompt skittish investors to cut back on InsurTech financing in 2020 may be somewhat alleviated by first-half data collected and reported by Venture Scanner.

Despite a massive rise in unemployment, a flip to negative GDP, and volatile capital markets, InsurTech industry investments in the aggregate appear to be as robust as ever. Investment of nearly $2.2 billion recorded by Venture Scanner going to 67 InsurTechs during the first half puts the sector well on track to finish with at least the second-highest amount ever, easily topping the $2.7 billion to $3.0 billion full-year figures recorded for 2015, 2017, and 2018 and perhaps even approaching 2019’s record of $5.54 billion (See figure 1.) 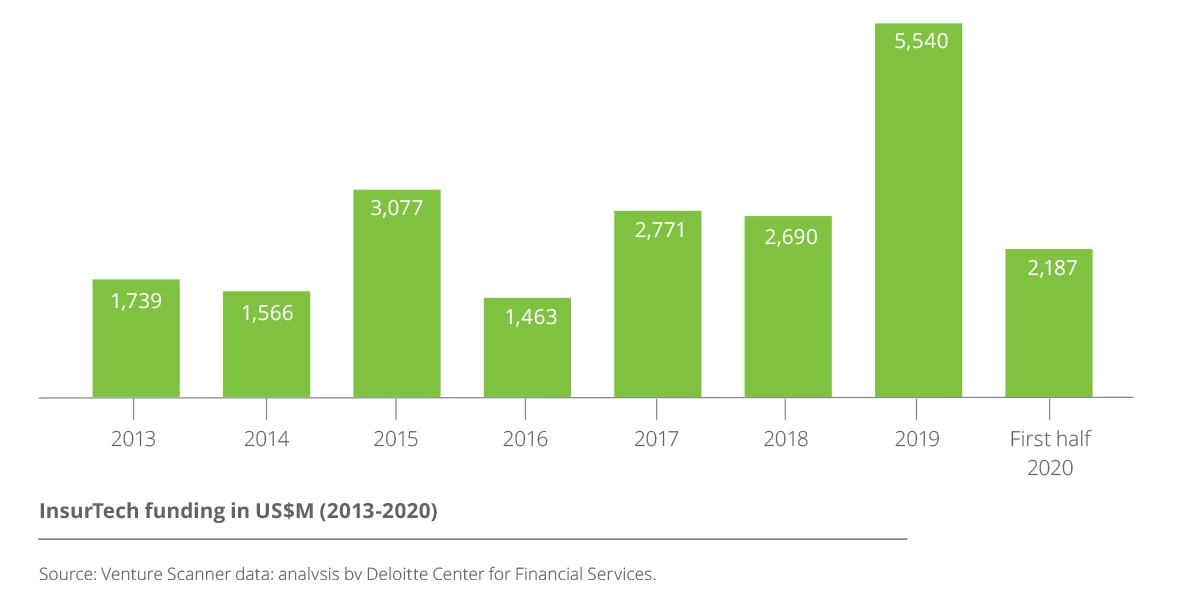 It was touch-and-go for a while. First-quarter investments were down slightly—mainly because of a precipitous decline in March, when the COVID-19 outbreak reached the United States, prompting lockdowns, business closings, and a nosedive in the US stock market. This is significant, because 75% of the funds raised in the first half, as recorded by Venture Scanner, were invested in US InsurTechs. Yet second-quarter investment was actually higher overall, Venture Scanner data showed, despite dropping more than 50% in April compared with the same month a year earlier. Investment bounced back strongly after that, nearly doubling May 2019’s figure and climbing about 40% year-over-year in June to pull the first half about even with 2019 levels. (See figures 2 and 3.)

Figure 2. Global InsurTech investment plummets when pandemic hits the United States in March and April, but rebounds strongly in May and June 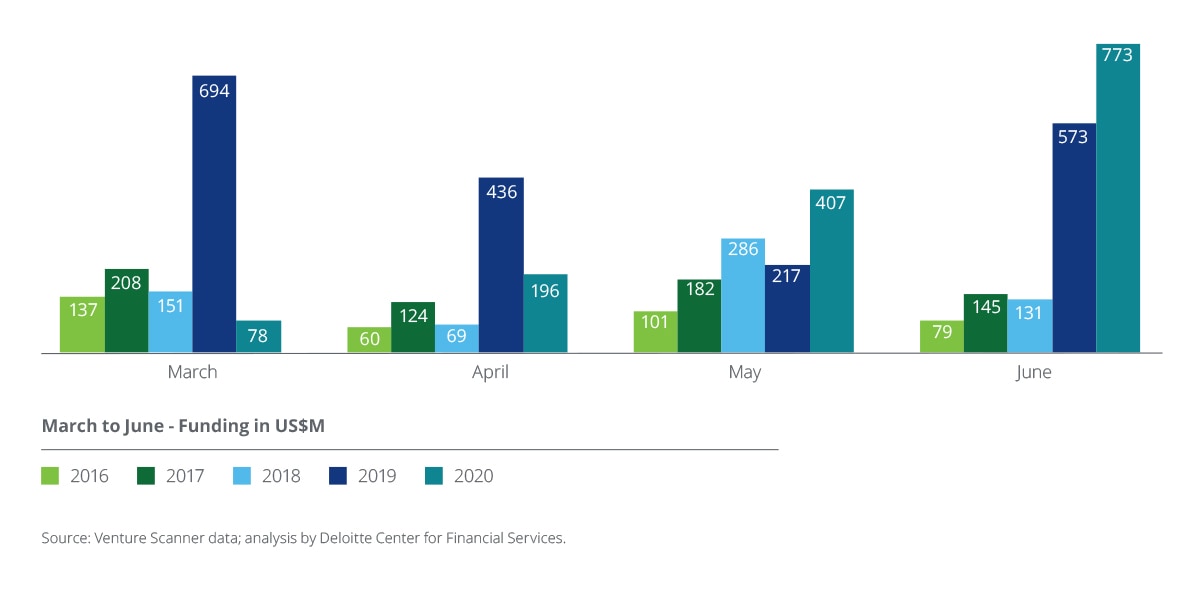 Figure 3. Higher capital raising in May and June drew first-half 2020 funding nearly even with 2019 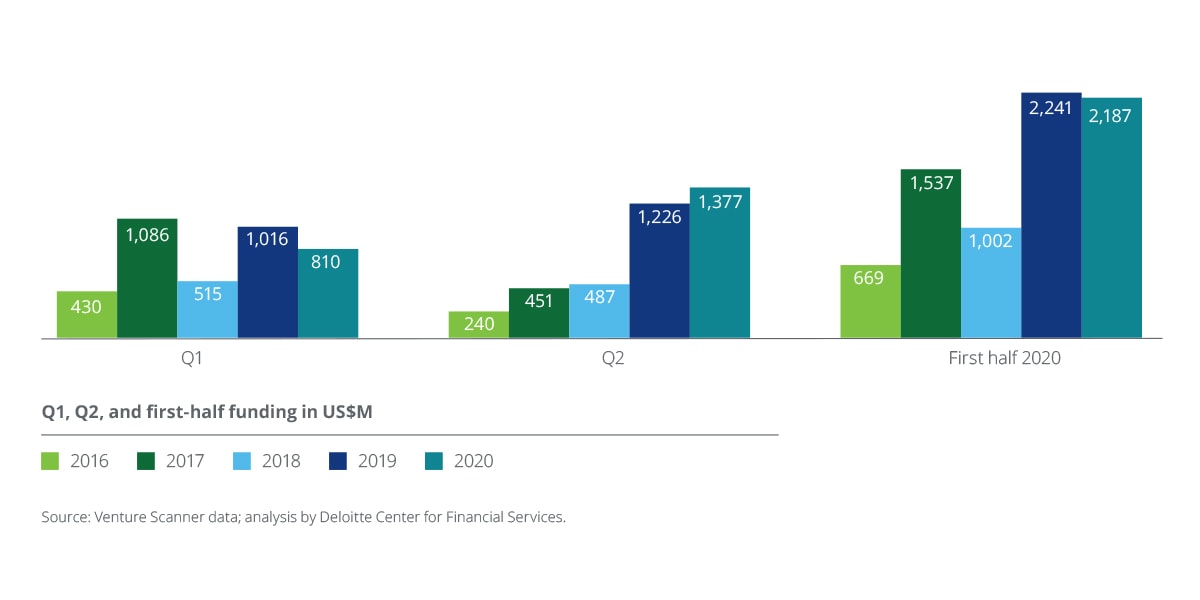 A deeper dive into the Venture Scanner data to see where all this money went, however, showed that most of the funding was concentrated among the top 10 InsurTechs, which accounted for nearly two-thirds of all dollars invested in the first half—with the top four dominating by drawing 44% of the total. Such concentration is not new (in the first half of 2019, the top 10 accounted for 53% of all funding), but it is accelerating, a phenomenon becoming more pronounced over the past few years, and described by more than one investor group we interviewed as evidence of an ongoing “flight to quality.” In that context, all remaining InsurTechs were left to battle over essentially just one-third of the capital raised in the first half.

At least InsurTechs outside the top 10 did not have to compete for funding with brand-new startups, as no launches were recorded by Venture Scanner for the first half of 2020. Only 38 entities have been launched in the past three years following the hundreds of InsurTechs created prior to 2018, saturating the market with often duplicative prototypes. (See figure 4.)

Figure 4. New InsurTech launches fewer and farther between since 2017 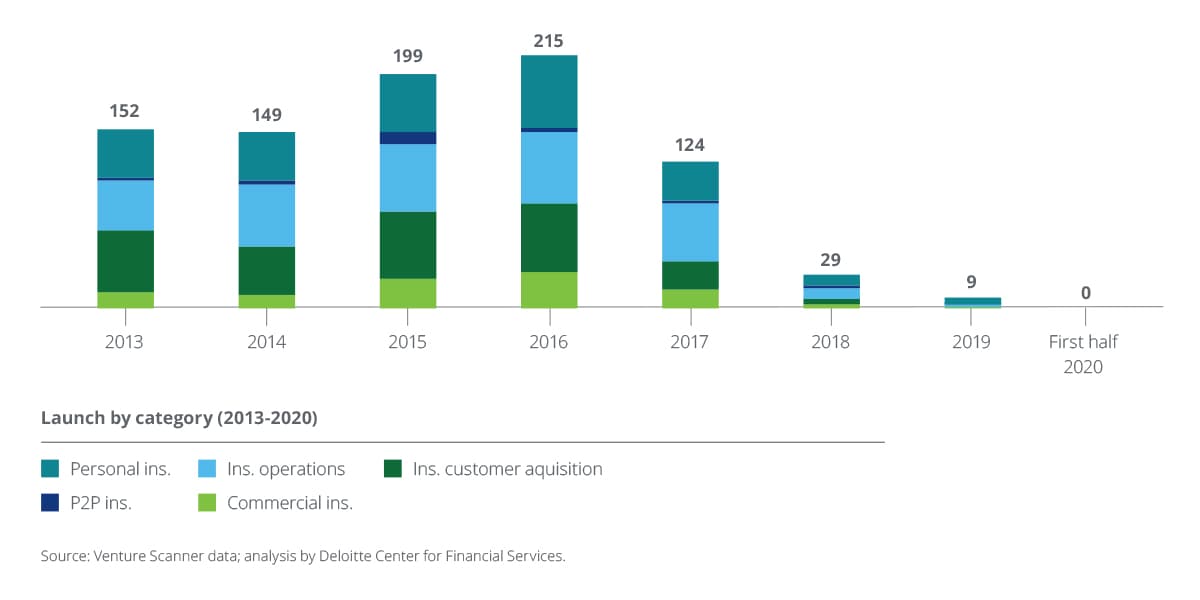 Indeed, the prevailing trend of investors and end users focusing on InsurTechs that appear more likely to make a market impact sooner rather than later is likely being accentuated by rising demand for those ready to deploy and that meet recently emerging needs, particularly related to the pandemic.

InsurTech growth outlook: Where might InsurTechs, insurers, and investors go from here?

How innovative can insurers afford to be during the pandemic and subsequent economic uncertainty? It remains to be seen whether insurers will look to InsurTechs to help them do what they have always done, only faster and cheaper, rather than engage with them to rethink traditional operating and business models.

There is also concern that once the pandemic passes, insurers may simply default to the way they always have done business, rather than permanently transform how they operate and deal with customers for the long term.

One VC firm urged insurers to seize the opportunity presented by the shifts in InsurTech investment priorities caused by the COVID-19 pandemic and to “think bigger. Don’t just digitize what you’ve always done and think you’ll automatically be better off over the long term.”

The challenge ahead is to reimagine how to engage with customers, generate additional revenue, control costs, launch new products and platforms, and deploy talent effectively in what promises to be an increasingly virtual, data-driven, and self-directed economy. InsurTechs will likely remain well positioned to help legacy carriers accomplish those goals, especially if internal innovation initiatives are sidelined as part of an insurer’s expense management mandate in response to an uncertain economy.

Another VC firm noted that while some InsurTechs may not ultimately survive in this difficult environment, “at least we’ve still created a lot of digitally savvy people who want to transform the InsurTech industry and are experienced in trying to do it. But insurers still need to figure out a way to attract such people, especially if they are entrepreneurs.”

"Think bigger. Don’t just digitize what you’ve always done and think you’ll automatically be better off over the long term."

Vice chair and US leader | Insurance