Switzerland's CFOs continue to send out positive signals. According to the current summer edition of the Deloitte CFO Survey, they are predominantly upbeat about the prospects for the economy and the success of their own companies. Swiss CFOs' expectations on their corporate indicators in the 12 months ahead are confident, while the outlook for new investment and higher employee numbers has also improved. In particular, investments in digital business models and in promoting employees' digital skills are being stepped up – although at the same time digitalisation is increasingly perceived as a risk.

The sentiment among the more than 100 Swiss Chief Financial Officers taking part remains upbeat, as per survey results for the second quarter of 2017. As many as 71% of CFOs rate Switzerland's economic prospects over the next 12 months as positive – the highest percentage since mid-2014. As in the previous quarter, 66% of Swiss CFOs are optimistic about their own company's financial prospects over the same period. The survey shows a particularly marked improvement in the individual corporate indicators. Revenue expectations for the next 12 months are positive among the majority of respondents and are up again this quarter (76%). Margin expectations are less optimistic than revenue expectations, but have also improved (38%) compared with the previous quarter (25%). For only the second time in two years, a majority of Swiss CFOs taking part in the survey expect operating margins to increase. Therefore, while many Swiss companies continue to experience pressure on margins, others have been able to counteract this pressure to some extent at least.

“The economic recovery continues in the second quarter of 2017,” said Michael Grampp, Chief Economist at Deloitte in Switzerland, commenting on the results of the CFO Survey. “This upturn is due to the strong export economy in Switzerland, the general international economic recovery and the easing of the Swiss franc. This improvement in sentiment is also reflected in investment expectations for the next 12 months. Encouraged by these positive signals, Swiss CFOs plan higher investments in the months ahead than in the previous quarters.”

The willingness to invest in digital technologies is at the top of the agenda at nearly all the Swiss companies (80%). The figure for Switzerland is therefore significantly above that for German companies (56%; see the German CFO Survey).

“Investing in employees’ digital skills is almost as high on the list of priorities,” adds Dennis Brandes, Senior Economic Analyst at Deloitte in Switzerland and co-author of the survey. “The essential question remains which skills employees will require in the future. In most cases, digitalisation is used to develop and manage internal processes, but many Swiss businesses are also prioritising digitalisation of sales channels, products and services, and development of digital business models.”

Digitalisation as a risk

When asked about the major internal and external risks for companies, Swiss CFOs rank geopolitical risks and the strong Swiss franc the highest. However, new trends are taking shape further down the list. While concerns over economic risks both at home and abroad, along with monetary policy risks, were high up in the rankings a year ago, internal corporate risks – such as price and margin pressure, and difficulties with suppliers and internal projects – now also rank highly among the risk factors. Digitalisation and technological change are increasingly perceived as risks, with respondents citing for instance cyber security risks and the challenges presented by new digital business models. 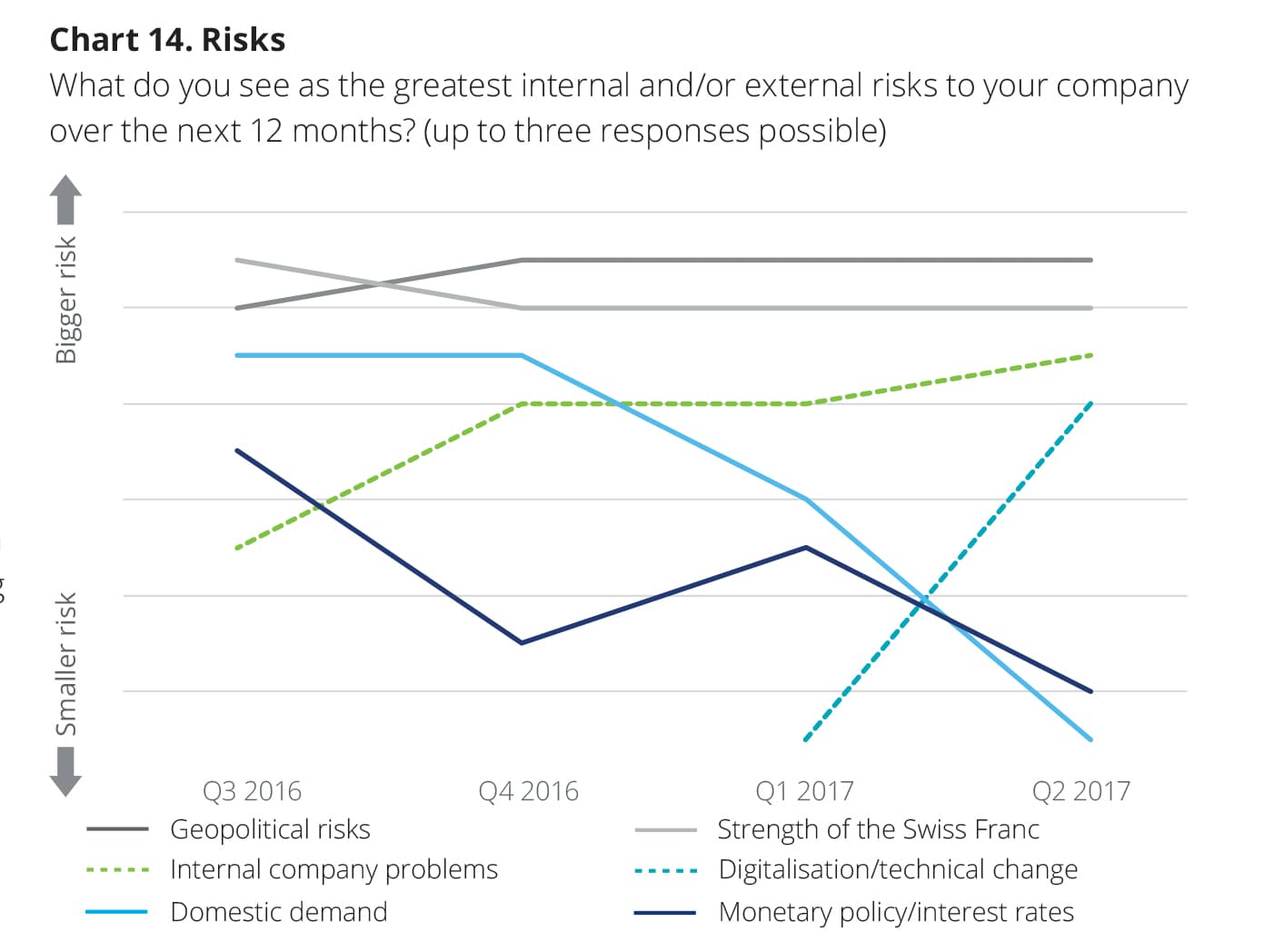 Concerns about the UK and US

While the perceived level of uncertainty in the economic and financial environment has gradually decreased in recent quarters and – after a very slight rise in the first quarter of this year (59%) – has now fallen to its lowest (52%) since the removal of the exchange rate floor against the euro (Q1 2015: 81%), uncertainty still remains high among CFOs. With regard to the trend among Switzerland's major trading partners, the political uncertainty represented by both Germany (8%) and France (23%) is perceived as lower than in the previous quarter. In contrast, the uncertainty represented by the UK (61%) and US (71%) has risen sharply. This is a result of the US administration's actions, and of the General Election outcome and Brexit negotiations in the UK.

Each quarter, Deloitte in Switzerland conducts a survey amongst Chief Financial Officers (CFOs) and Group Financial Directors. The survey gauges their attitudes towards to outlook for business, financing, risk and strategies, and identifies trends and key themes in the Swiss corporate sector. The summer 2017 edition was conducted between 29 May and 26 June 2017, with a total of 101 CFOs participating. They represent both listed companies and large private companies from all relevant industries. The CFO Survey is the only of its kind in Switzerland. Deloitte conducts similar surveys in 30 other countries.