Deloitte Tohmatsu Group will be joining online Tokyo Rainbow Pride 2021 whose website opens today, April 16, and we will have our online booth as well as a free seminar on April 25. (Details are at the bottom of this article.)

We have never imagined this a few years ago, but now online events have become the “New Normal”. Throughout history, human beings have adapted to changes and adjusted lifestyles. The past year has re-convinced us that people’s values and common-sense change drastically according to the time and environment.

Having said that, we may be seeing a start of a change to one of the traditional beliefs of the Japanese society, “marriage is between man and a woman.”

What was highlighted by the ruling of marriage equality?

On March 17, Sapporo District Court ruled that it is unconstitutional to ban same-sex marriage, while dismissing the claim for compensation. The news was covered by many media, so you may already be familiar.

This lawsuit was supported by Marriage For All Japan, one of the associations empowering the “Business For Marriage Equality” campaign, fighting for marriage equality. There are currently similar lawsuits in 5 district courts (including Sapporo) around Japan, so this ruling may influence others. As one of the first supporters of “Business for Marriage Equality” Campaign, Deloitte Tohmatsu Group has been following this transformative lawsuits status closely.

As we have noted in the article “Until the Word LGBT disappears”, Deloitte Tohmatsu Group recognizes same-sex partners as employee’s spouse, but we are more than aware that it is not enough to compensate for all of the advantages one may gain by getting legally married. In the ruling of the Sapporo District Court, it has been noted that the only difference between heterosexual and homosexual was one’s sexual orientation which cannot be changed by their own will, therefore unequal if not being able to receive legal effects by marriage.

The word, “LGBT” has gotten popular that now it is on an encyclopedia and understandings for sexual minorities have been improving. However, among the Group of Seven (G7) nations, Japan is the only country that does not allow same-sex marriage. How many people realize that current Japanese law, which bans same-sex marriage, is not equal for everyone?

This is a social issue that concerns everyone, not just LGBT+ members. Unfortunately, not everyone in Japan is aware of the issue as “their issue” or has enough knowledge about sexual minorities. In our Ally network, there are voices claiming that understanding differs by environment, area, or generation. These kinds of gaps and challenges are the issues that whole society should face as well.

What we can do for a change

The theme for Tokyo Rainbow Pride 2021 is “Our voices, Our Rights” -reflecting this disruptive time, and we will be hosting a free seminar, “Sneak peek into Deloitte Tohmatsu internal training ~How to be an LGBT Ally~” on April 25 (Sun) as mentioned earlier.

The seminar is based on our member’s experiences and our D&I insights, which covers from basics about LGBT+ to practical case studies. We will be discussing how LGBT+ related challenges at workplace should be handled and how initiatives should be empowered in any organizations. The seminar is not only for LGBT+ members, but for everyone who would like to start an initiative in empowering more inclusive society. During a Q&A session, our LGBT+ member will answer any questions you may have whether you are an LGBT+ ally or corporate member empowering D&I in your organization. We hope this will help anyone trying to empower D&I and together, we strive to make an impact that matters.

What we pursue at Deloitte Tohmatsu Group is not just our internal Diversity and Inclusion, but a true inclusive society where everyone can be true to themselves.

Voicing our thoughts is one of the things we can do to change the world, and we believe that our voice will reach more people, and together with everyone, we can be the forces to change the future for the better. Hope you will join us over the Tokyo Rainbow Pride 2021.

The above are Japanese Standard Time.

・via Zoom Webinar / You can join from below:

・No registration required, and you can join anonymously.・For Q&A, we will have an LGBT+ member answer any questions you may have. 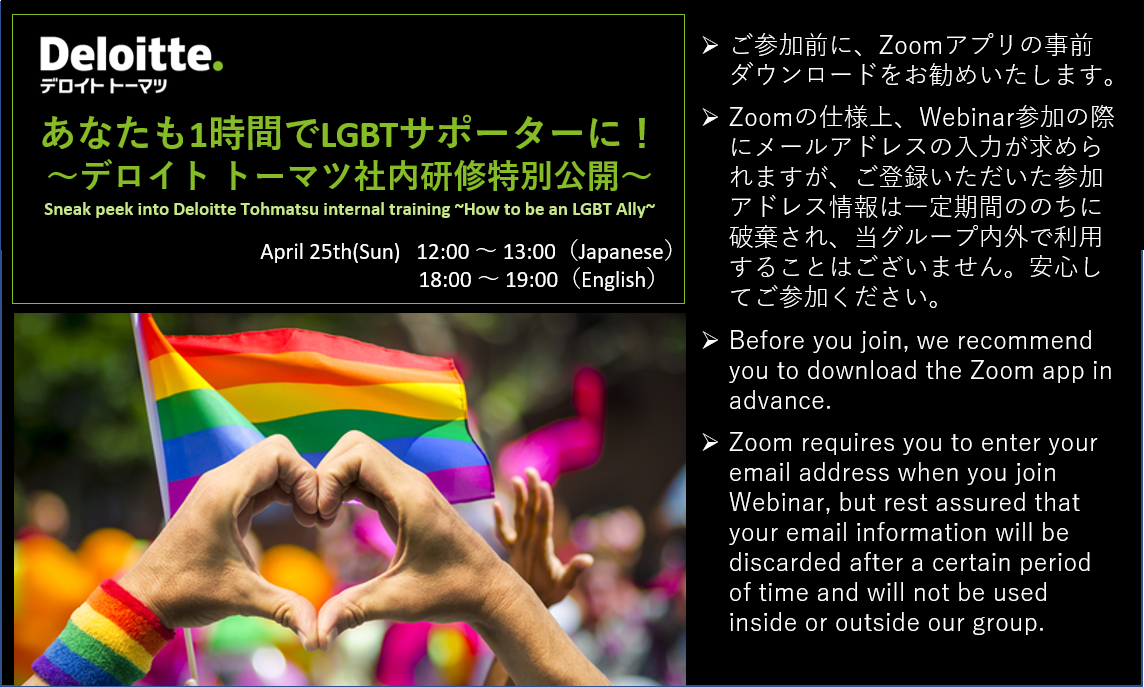 "Diversity, Equity, & Inclusion (DEI)" has been one of the key management strategies at Deloitte Tohmatsu Group -to drive the organizational and client growth to be leveraged for social impact. DEI Team is a group of DEI professionals to closely work with the top management -to design and implement a wide range of initiatives to turn various "differences" -such as gender, sexuality, race/ethnicity, cultural differences including religion and language, and disabilities, into a source of “strength”.  (See further details from HERE).

Deloitte Tohmatsu Group has been empowering Diversity, Equity & Inclusion. Various initiatives in place, to empower all the “different” members can empower in and out.