Japan Economic Outlook: Headed for uneven recovery in the first half

CFO Insights is a monthly publication that delivers an easily digestible and regular stream of perspectives on the challenges confronting CFOs. In this month’s edition, we share the latest Japan Economic Outlook, published on Mar 18th.

Omicron’s lingering impact, high import and energy costs, and subdued exports will lead Japan to uneven economic recovery in the first half of 2022.

Japan’s economic recovery is underway, but it will remain uneven until at least the second half of 2022. The Omicron outbreak weakened the economy at the start of this year. In addition, high energy costs will erode consumer purchasing power and raise imports. Supply chain issues, meanwhile, will keep a lid on export growth. Although policymakers are tempting companies to raise wages more quickly, strong wage gains are unlikely this year.

This article was originally published on Deloitte Insights on March 18th, 2022. Reproduced with permission.

Real GDP grew by 1.7% in 2021.1 Economic growth was notably volatile throughout the year, with pandemic-induced contractions seen in Q1 and Q3. Real GDP rebounded strongly at the end of 2021, growing 1.3%2 (not annualized) in Q4. With the end of the state of emergency, pent-up consumer demand took over, and as a result, household spending grew by 2.7%3 in Q4. Spending on durable goods, semidurable goods, and services were all notably strong. Exports also supported growth, rising 1.6% in Q4, while imports fell slightly in real terms. Unfortunately, investment remains weak. Business investment, despite growing modestly in Q4, remained more than 10% below where it had been before the pandemic hit. Government investment plummeted to its lowest level since 2015, and private residential investment dropped to its lowest since 2010.4

Despite the relatively strong GDP growth to end the year, real GDP was still 2.9% below its prepandemic peak,5 a weaker performance than most developed economies (figure 1). What is more, the economic outlook going forward remains volatile. Just as the Delta variant led to economic contraction in Q3 2021, the Omicron variant will likely lead to contraction in Q1 2022. As of March 1, a quasi-state of emergency was in place for 31 of the country’s 47 prefectures. These restrictions are expected to remain in place for 14 prefectures, including Tokyo, until March 21.6 Mobility near retail and recreation establishments, a proxy for consumer spending, plummeted in January to the lowest levels seen since September 2021. Although mobility witnessed a slight improvement in February, it remained more than 10% below prepandemic levels as of March.7 Such a staggering drop in mobility does not bode well for consumer spending in Q1 2022.

Japan’s growth trajectory depends heavily on how the government responds to future variants or waves of infection. So far, policymakers have been fairly cautious, promptly implementing states of emergency and closing borders. Part of this cautious approach is due to a relatively low share of the population having received booster shots,8 putting more people at risk of serious or even fatal illness should they become infected. The other issue is that policymakers are keen to limit the spread of the virus leading up to the upper house election scheduled for July.9 This raises the probability that restrictions and border closures will restrain economic growth into the second half of the year. Thereafter, economic growth should be more consistently positive as policy reactions to virus outbreaks are likely to be less disruptive.

In addition to pandemic-related challenges, consumers are also facing steeper energy prices due to the ongoing conflict in Ukraine. Energy price spikes reduce household purchasing power and restrain consumer spending. Japan’s mineral fuel imports—mainly crude oil, petroleum products, and liquefied natural gas—amounted to 16.9 trillion yen in 2021, or 20% of all imported goods10 (figure 2). A 60% increase in the price of those imports will cost more than 10 trillion yen annually, or nearly 2% of GDP.11 Households, meanwhile, have amassed a sizable stockpile of savings, which can help cushion the blow to this loss of purchasing power. However, if energy prices remain elevated or move higher, those savings will quickly dwindle. 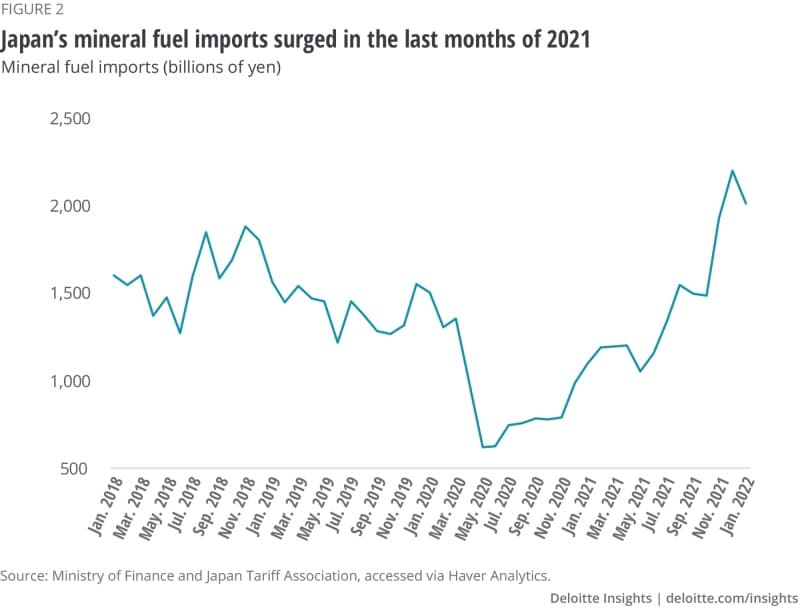 While imports rise quickly along with energy prices, supply chain issues continue to challenge export growth. Specifically, a shortage of semiconductors still plagues the auto industry. Motor vehicle exports remain below where they were two years ago despite strong demand and high prices.12 Furthermore, cyberattacks that forced some automakers to halt production13 will not help Japan’s motor vehicle export growth. On the plus side, Japan exports a substantial amount of semiconductor-related machinery, the demand for which is incredibly high. Exports of this equipment, therefore, should remain strong for most of this year, providing a much-needed tailwind to export growth.

Part of Prime Minister Kishida’s “new capitalism” agenda focuses on reducing inequality. To achieve this, Kishida has encouraged businesses to raise wages by at least 3% this year during the shunto, Japan’s annual wage negotiations between unions and businesses. Large companies that raise wages by 3% or more can deduct up to 40% of the wage gain from their tax bill. In addition, subsidies are being offered to smaller companies that would not otherwise be able to raise wages.14

Despite these efforts to raise workers’ pay, wage growth is likely to disappoint again this year for several reasons. First, structural issues hold back stronger wage growth in Japan. Employment stability is prioritized at the expense of stronger wage growth. Keeping workers on payrolls during downturns means there is less money available for wage increases when economic conditions improve. As a result, contractual wage growth is restrained as it is seen as a fixed cost that is difficult to reduce should conditions worsen. However, due to its temporary nature, bonus pay is more flexible and tends to move more predictably with labor market conditions15 (figure 3). 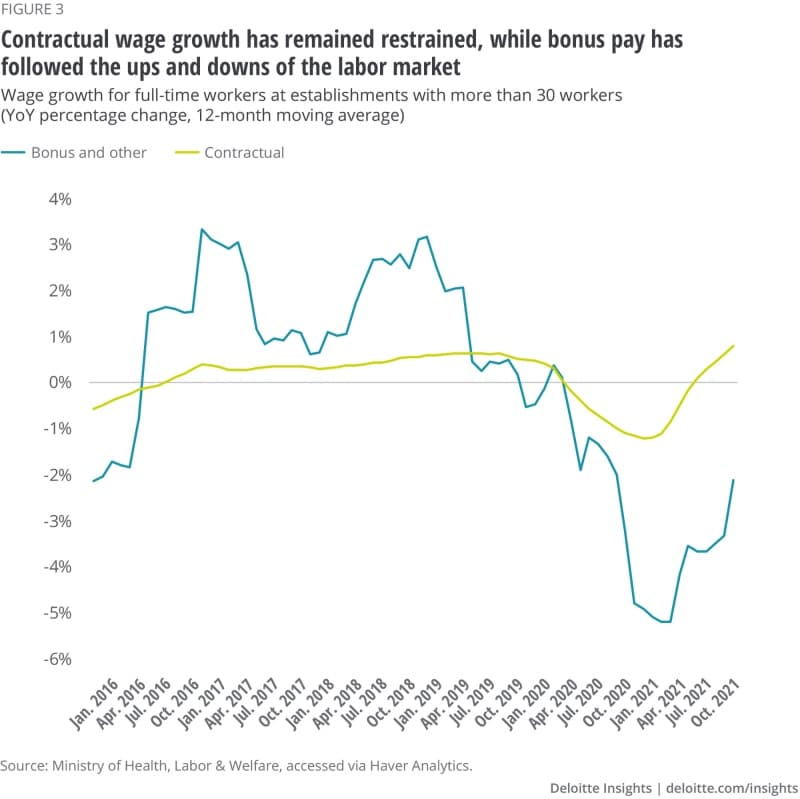 Unfortunately, there is more slack in the labor market than the 2.7% unemployment rate16 would otherwise indicate. The expansion of the employment-adjustment subsidy allowed more workers to remain on payrolls despite the sharp downturn in economic activity during the pandemic. Perhaps a better measure of slack in the labor market is the aggregate number of hours worked, which in December was still 2.8% below the level seen two years earlier.17 Without a tighter labor market, companies are likely to be hesitant to raise wages quickly, even for temporary bonuses.

Stronger inflation could give unions more bargaining power during this year’s wage negotiations. However, headline inflation was up just 0.5% from a year earlier in January.18 Although policy intervention to reduce mobile phone charges is artificially holding down headline inflation,19 the relatively weak print will do little to persuade companies that workers need to be compensated for rapidly rising prices. Inflation is expected to be much stronger by April. The base effects of the policy intervention for mobile phone charges will be gone by then, and energy prices are likely to remain high on a year-over-year basis. But the April inflation numbers will be published well after most of the wage negotiations are concluded. Survey data for this year’s shunto also suggests that wage gains will remain modest this year.

To sum up, Japan’s path to economic recovery will be a bumpy one for at least the first half of this year. The pandemic will continue to have significantly negative economic effects as long as each wave of infections is met with a relatively stringent lockdown. As more people become fully immunized and once the election is over, the economic recovery should be able to take off more fully. In the meantime, higher import and energy prices will continue to weigh on consumer spending. This is especially true given that wage growth is likely to disappoint again this year, leading to a decline in real wages should inflation pick up more materially. By the second half of the year, however, supply chain bottlenecks should ease more substantially, allowing for stronger export growth.