Retail sales: Trends in revenue and employment Behind the Numbers, January 2018

Retail trade is a key avenue of consumer spending and makes a major contribution to the labor market as well. The sector, however, is undergoing some changes, which have impacted total sales, revenues of different store types, and employment.

The buzz of the holiday season may not be able to drown out the voices of concern about the future of retail trade.1 According to an article in Bloomberg, store closings in the first three quarters of 2017 far outnumbered new openings.2 Similarly, commentary on department stores long past their prime and young people setting aside more funds for retirement than immediate spending have not helped retailers.3 Changes in business are, of course, inevitable and retail trade is no exception to that. Large disruptions in the sector, however, will likely have repercussions for the wider economy. Retail trade is not only a key avenue of consumer spending (retailers sold goods and services worth $4.6 trillion in the year until November 2017), but also a major contributor to the labor market.4

A large, yet declining, contribution to the economy

In the period between 2000 and 2016, retail sales grew at an average annual rate of 3.1 percent. In 2016 alone, retailers recorded sales worth $4.8 trillion. How much does this figure amount to? Quite a lot. The value of retail sales in 2016, for example, amounted to 26 percent of nominal GDP. The ratio, however, has been slowly declining. Back in 2000, for example, the ratio of retail sales to nominal GDP was higher at 29 percent (see figure 1). Food services and drinking places, on the other hand, have seen sales rise at a faster pace than retailers during the aforementioned period. While overall retail sales have lagged the economy, some store types have done well. Non-store retailers have grown quickly, partially due to strong growth in e-commerce.5 The share of e-commerce in retail sales was 9.1 percent in Q3 2017, up from about 1.0 percent 17 years ago. Other store types where sales have grown faster than overall retail sales are health and personal care stores (4.8 percent), gasoline stations (3.3 percent), and general merchandise stores (3.3 percent). Health and personal care stores experienced faster sales because of the rapid growth of purchases of prescription pharmaceuticals, while the sales growth at gasoline stations is reflective of the change in gasoline prices.

Stores that saw particularly slow sales growth include furniture and home furnishing stores; electronics and appliances stores; and sporting goods, hobby, book, and music stores (see figure 2). Brick-and-mortar sales in those types of stores have likely lost out to e-commerce. The surge in e-commerce is not likely to slow in the near term as young people focus more on the online market. Deloitte’s holiday survey for 2017, for example, found out that Generation Z and Millennials intended to spend 61 percent and 58 percent, respectively, of their holiday budgets online.6 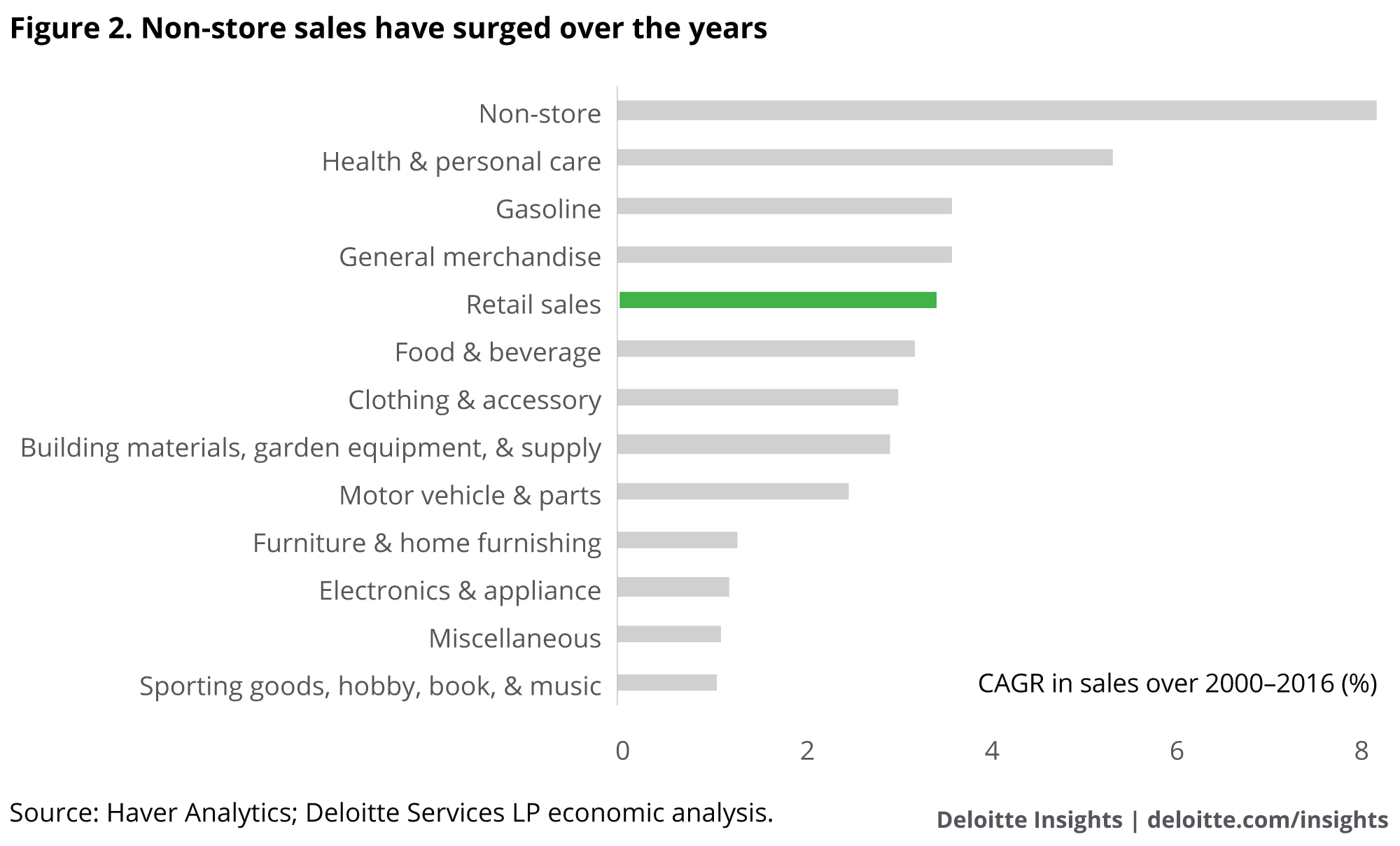 With growth rates varying across store types, it is natural that the shares of different store types in total retail sales have changed. Non-store retailers, for example, have nearly doubled their share in retail sales over the last 17 years (see figure 3). Sales at motor vehicle and parts dealers continue to account for the largest share in retail sales, but the figure has dropped to 23.4 percent in 2017 (first 11 months) from 26.7 percent in 2000.

For all the surge in e-commerce, the share in payrolls of non-store retailers have increased only marginally since 2000 (see figure 3). What explains this phenomenon? It is likely that part of the increasing payrolls for non-store retailers is being taken up by the transportation and warehousing sector. For example, the ratio of payrolls in general warehousing and storage—a segment critical for e-commerce—to payrolls in retail sales has nearly doubled to 5.3 percent over 2000–2017.

Have occupations within retail trade changed? Not by much

The share of office and administrative support occupations in the total retail workforce increased from 16.5 to 17.5 percent over 2003–2016. Trends in shares of this occupation within different store types, however, vary. Overall, occupations that are witnessing a decreasing presence in the overall retail workforce are installation, maintenance and repair, and transportation and material moving. 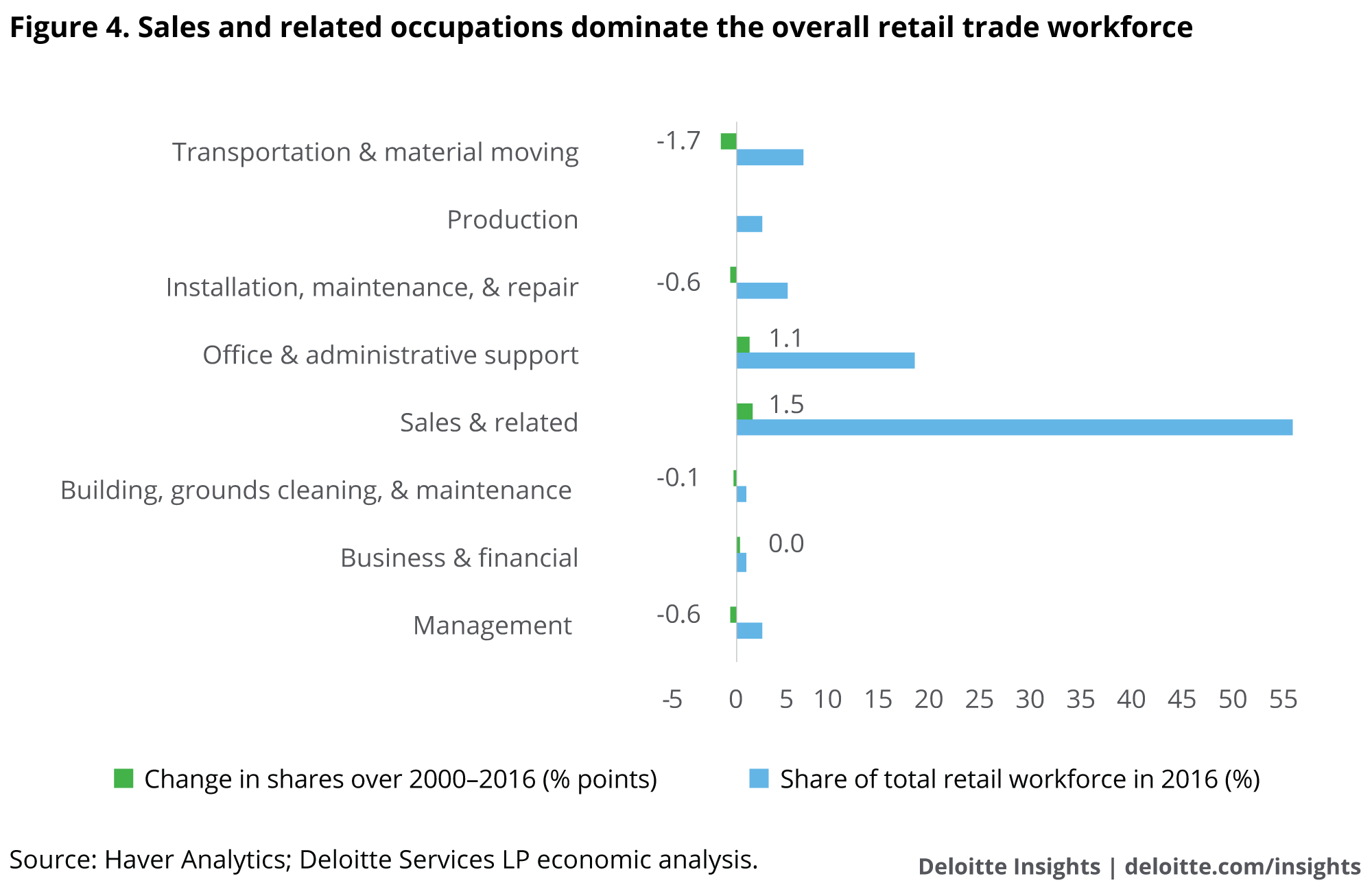 Many retailers are beginning to understand that the sector is poised to undergo a significant change. Of course, retailing will continue to be the primary way consumers purchase goods. But the future may be quite different for some sectors, such as automobiles, where the consumer ownership model may be replaced by the purchase of transportation as a service.7 And as e-commerce takes up an ever-larger share of sales, the mix of occupations, wage rates, and the industry’s relationship to the economy likely will all change. The beginning of these changes is evident in the slowdown in employment and relatively slow growth of the sector’s revenues, features that may continue and even intensify in the future.

Retail sales: Trends in revenue and employment has been saved

Retail sales: Trends in revenue and employment has been removed