A human capital challenge in information technology Behind the Numbers, December 2016

A large number of job openings, low unemployment, and decreased matching efficiency in the labor market imply that hiring high-quality talent is likely to be a challenge. This is particularly true in the IT sector, which is trying to cope with a projected increase in job openings, ever-changing demand for skills, and the rise of the gig economy.

Job openings in the United States are at an all-time high.1 Low unemployment means that business executives have a smaller pool to source talent for open positions. Though the challenge spans the entire economy, it is starker in certain sectors. One such sector is information technology (IT). Not only is IT likely to create many more jobs in the future, it is also likely to account for the most number of unfilled jobs. Certain factors such as the relatively quick shift in demand for skills and the growing trend of part-time, project-specific employment aggravates the challenges faced by talent acquisition and management efforts in the IT sector. Conventional acquisition and management methods are likely to require technological enhancement in order to ease the problem.

The relationship between job openings and the supply of available labor

The Beveridge curve for the US economy (figure 1) shows movement down the curve during the Great Recession, implying a larger pool of labor (higher unemployment) for a low level of job openings, and a subsequent movement up the curve during the recovery phase, implying a smaller pool of labor for a comparatively high level of job openings. At the end of October 2016, the US economy recorded more than 5 million job openings, nearly 60 percent higher than the level five years ago (October 2011) during the early stages of economic recovery. A low unemployment rate, hovering around 5 percent in 2016 (4.7 percent in October 2016), compared to 9.0 percent in 2011, means that the pool of available labor is relatively small. Moreover, the US Beveridge curve has shifted up and out after the Great Recession (refer figure 1), indicating a decrease in matching efficiency in the labor market.2 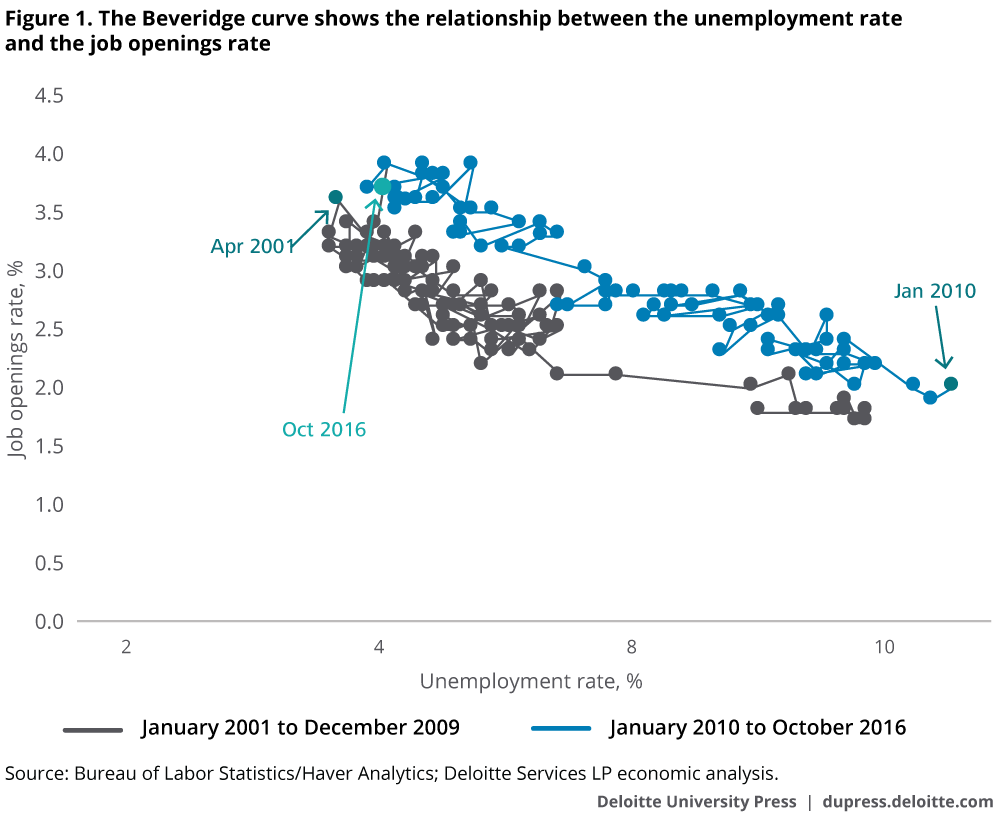 The challenge of recruiting talent in the expansion phase of the business cycle has resulted in increased recruitment intensity. The DHI-DFH index of recruitment intensity per vacancy shows an upward trend since the end of the recession in 2009. However, so does the average number of working days taken to fill an open position (figure 2). Furthermore, the job openings rate has edged above the hires rate for the first time since the Job Openings and Labor Turnover Survey (JOLTS) began in December 2000 (figure 3). 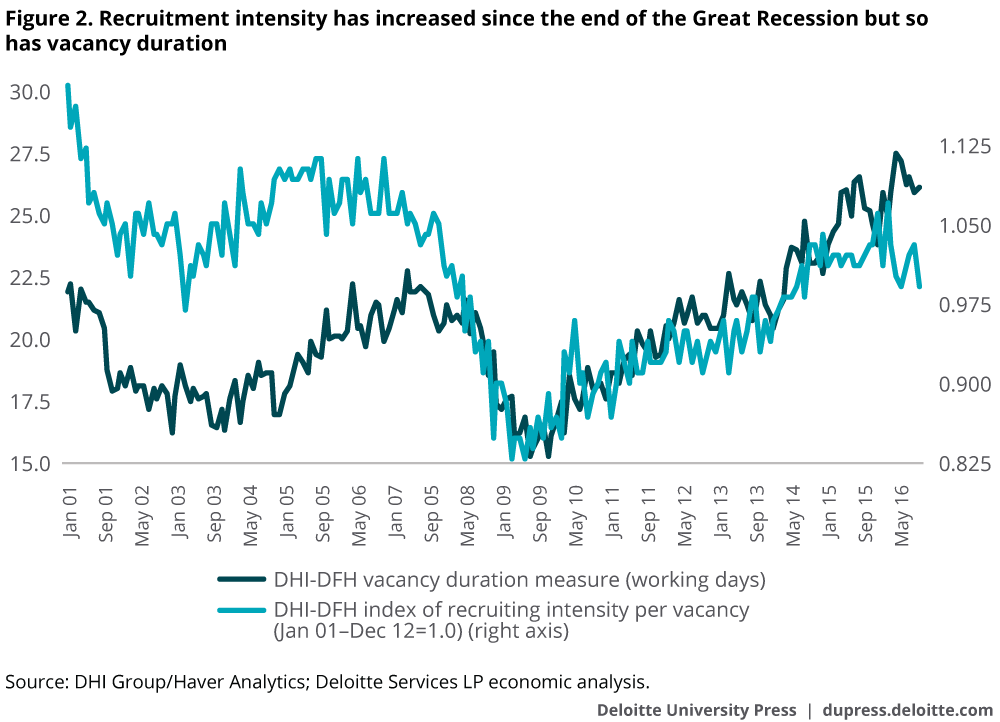 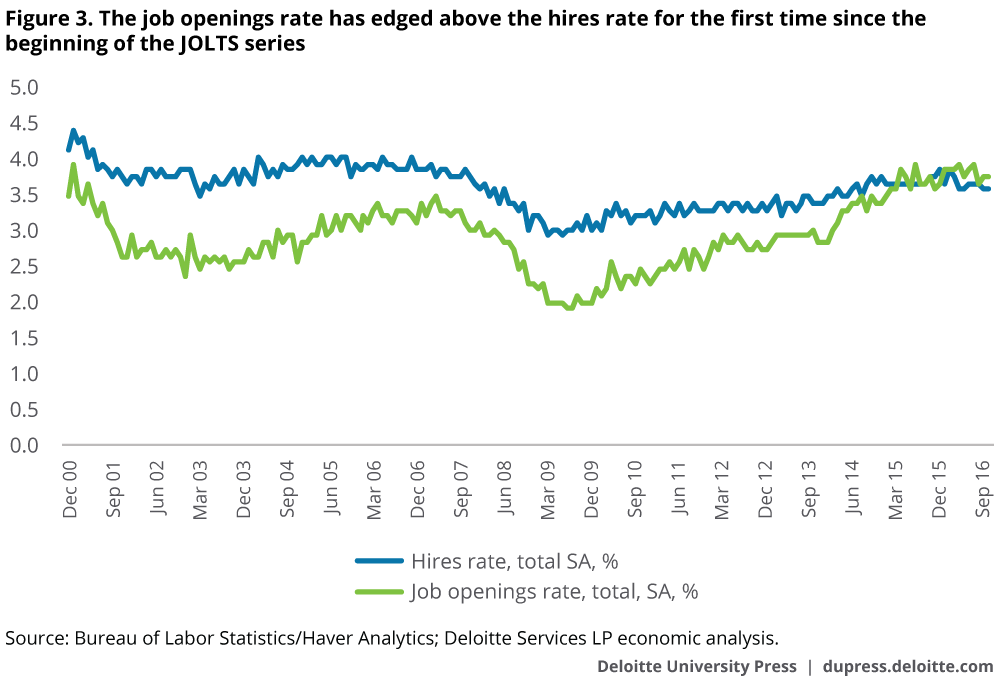 What is the challenge in IT?

According to the TechHire initiative launched in 2015 by the Obama administration to match IT talent to employers seeking such talent, more than 12 percent of the 5 million job openings are in the IT space, making it the largest occupational category for open jobs.3 Necessary skills such as cybersecurity and data analytics face deficiencies. Furthermore, according to the occupational outlook handbook of the Bureau of Labor Statistics (BLS), employment in computer and information technology is projected to grow 12 percent between 2014 and 2024, faster than the average for all other occupations.4 This is in part due to the increasing importance of cloud computing, the collection and storage of big data, and the onset of the Internet of Things (IoT). In general, increased digitization is likely to increase the demand for computer systems analysts, software developers, network and information security professionals, information systems management professionals, and computer user-support specialists.

Leaving IT jobs unfilled can have serious consequences. For instance, with the rise of the IoT, the number of connected devices is estimated to increase to 200 billion by 2020, from 2 billion in 2006.5 Cyberattacks—crimes ranging from data theft to malware—are also on the rise. In 2015, the number of breaches involving the exposure of more than 10 million identities increased by 125 percent and new mobile vulnerabilities increased by 214 percent.6 Without the right IT talent in cybersecurity, the proliferation of the IoT could give cyber criminals increased opportunity to attack and breach businesses. Moreover, IT skills such as cybersecurity and data analytics span all industries from manufacturing and retail to financial services and government. In fact, IT skills in general span several industries, and therefore, filling IT job openings with the right talent is important to the overall performance of the economy.

However, talent acquisition and talent management in IT is not an easy task. The sector is ever changing, characterized by disruptive technological developments and, in turn, relatively quick changes in skill requirements.

What’s aggravating the talent crunch in IT?

Two significant factors impact the human capital challenges in IT:

Changing demand for skills: Rapid developments in the IT space imply relatively quick shifts in the demand for skills. In fact, a rule of thumb is that the greater the technicality of a skill the shorter the time span for which it will be useful (figure 4). Demand for technical platform-based skills, an integral component in the IT sector, usually shifts quickly. This is even more pronounced in the case of analytics software packages (figure 5). Employees in the IT sector, particularly Millennial employees with skills that span multiple platforms or tools, tend to be attracted to short-term projects that more closely match their skillsets. As a result, there is likely to be relatively greater churn in the IT sector, making talent acquisition and management a challenging task. 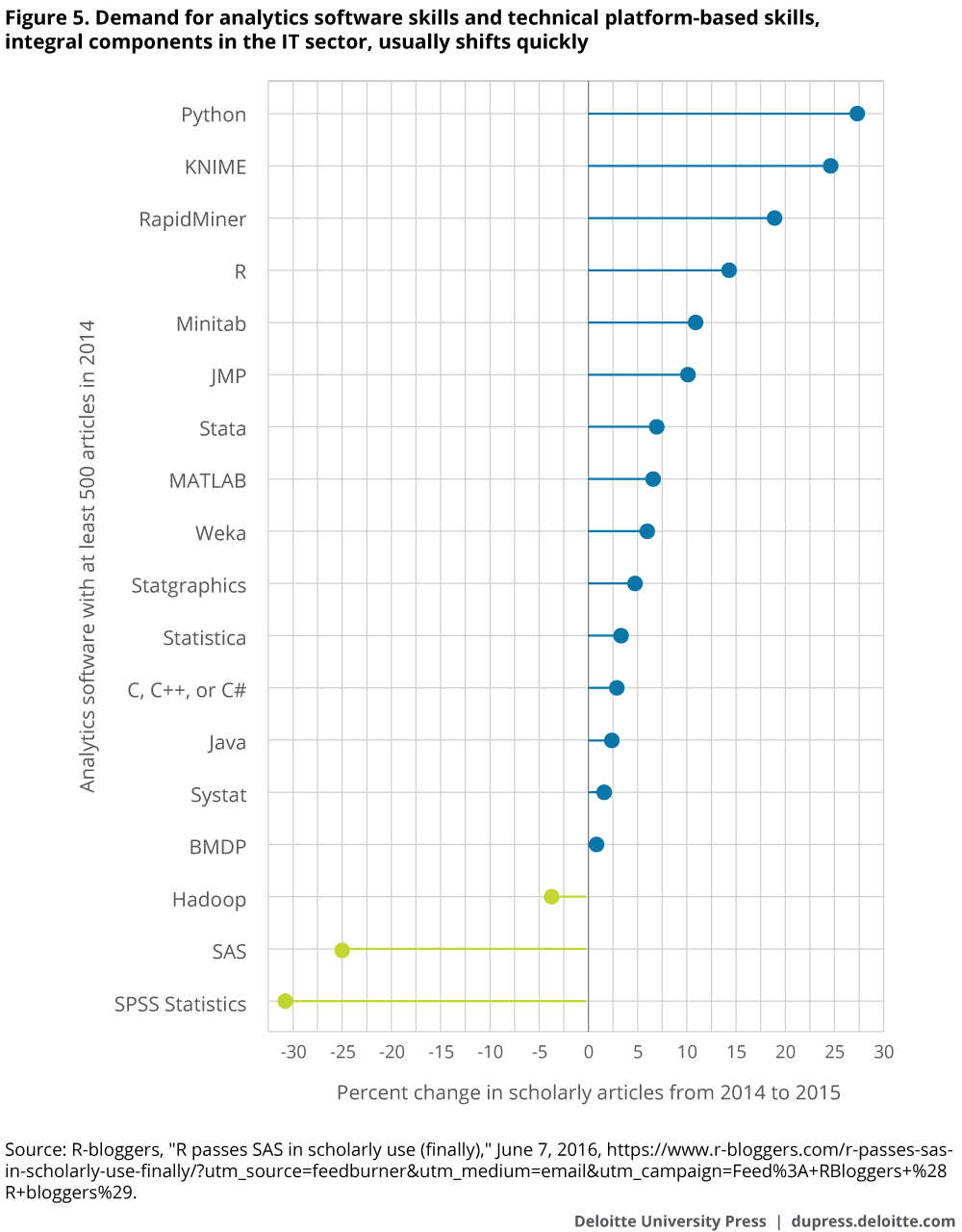 The rise of the “open talent economy”: Also known as the “gig economy,” it refers to all non-employee, off-the-balance-sheet workers. This also includes freelance workers, contract workers, and some part-time workers (figure 6). In short, it loosely refers to all workers outside conventional full-time employment. As is evident, defining the gig economy is challenging and therefore so is accurately measuring it. However, we know that it is growing—for instance, more than one in three workers in the United States is a freelancer and this number is projected to reach 40 percent by 2020.7 Deloitte’s Global Human Capital Trends 2016 report based on a survey of global business executives found that 42 percent of the executives surveyed expect to increase or significantly increase the use of contingent workers in the next three to five years.8 While much of the wide definition of the gig economy is accounted for by “rides and rooms” companies, the IT sector is also part of this labor market trend. In fact, the BLS lists computer and information technology as one of the sectors in which the gig economy is more likely to grow since workers can be employed on-demand for single tasks.9 The shifts in IT skills required, either platform-specific or software-package-specific, means that companies are in relatively frequent need of specific talent for a specific period of time to get a specific task completed. On the other hand, professionals with skills across platforms and software packages can allocate time to more than one gig. In this sense, the gig economy is beneficial to IT as it drives better utilization of capacity and increases overall efficiency (“just in time” and “right part, right time” employment). However, from a talent acquisition and management perspective, the gig economy poses a challenge. 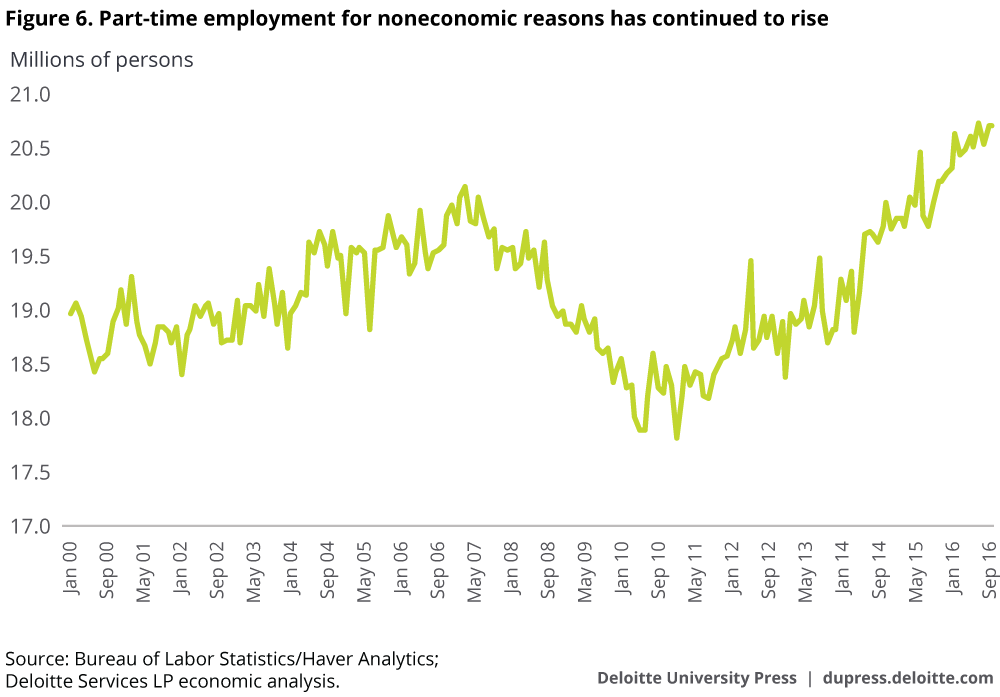 Conventional talent acquisition and management techniques need to be enhanced

In addition to the factors above, the IT sector of the future will be staffed by Millennials and Generation Z employees. Together, they will constitute the first digital native workforce. This adds to the argument for digitizing the talent acquisition and management process in IT. Some solutions that technology offers include:

As mentioned before, it is important to address the talent gap in IT, since it impacts the entire economy either directly or indirectly. Ironically, building and implementing the possible solutions for easing the human capital challenge in IT requires high-quality IT talent—a challenge that talent acquisition and management teams will have to address soon.

The author would like to thank Preeta Banerjee, Sunil Nair, and Karthik Ramachandran for their valuable contributions to this article.

Behind the Numbers , Information Technology , Talent

A human capital challenge in information technology has been saved

A human capital challenge in information technology has been removed