Stepping up the pace: Bank M&amp;A likely to improve in 2019 has been saved

Stepping up the pace: Bank M&amp;A likely to improve in 2019 has been removed

An Article Titled Stepping up the pace: Bank M&amp;A likely to improve in 2019 already exists in Saved items

Stepping up the pace: Bank M&A likely to improve in 2019

While there were less bank mergers and acquisitions (M&A) than expected last year, regulatory relief for mid-sized banks and continued capital availability will encourage more consolidation in 2019.

The year 2018 proved to be a good one for US banks, as a stronger economy, rising rates, and the tax cuts boosted earnings. Banks were the biggest winners of the tax overhaul, signed into law in late 2017.1 Given these favorable trends, many industry experts expected bank merger and acquisition (M&A) activity to pick up, but it turned out to be close to flat—with just a 2 percent increase in deal volume year-on-year.

This begs the question: What did banks do with all the additional capital available? In short: They predominantly returned capital to shareholders in the form of share buybacks and dividends instead of ploughing money into acquisitions, partly because of shareholders’ skepticism.2

However, looking ahead, 2019 could be a better year for US bank M&A, especially with regulatory relief in place for mid-sized banks.

Bank M&A activity remained flat, with 261 deals announced in 2018, compared to 257 deals in 2017. In line with prior years, banks with assets between $1 billion and $20 billion remained the most active acquirers in 2018 (Figure 1). However, deal value increased to $30 billion (+13 percent year-over-year), pushing the average deal value to a decade-high of $189 million.3 In fact, buyers were willing to pay healthy premiums: The average price-to-tangible book value across all US bank deals rose to a ten-year high of 176 percent in 2018, up from 167 percent in 2017 (Figure 2). Despite these elevated price multiples, banks were keen to increase market share in high-growth areas, driving up both deal values and premiums.4 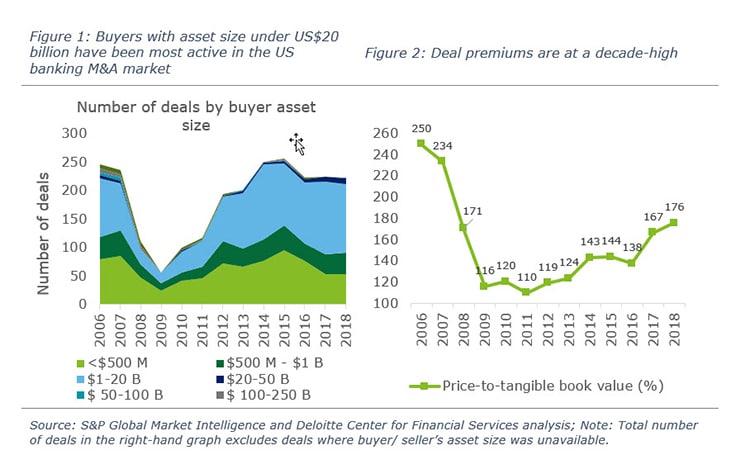 In May 2018, the US Senate increased the systematically important financial institution (SIFI) threshold to $250 billion. This provided immediate regulatory relief to banks with assets between $50 billion and $100 billion. For those with assets between $100 billion and $250 billion, easing will kick in after 18 months. Nevertheless, banks nearing the previous SIFI threshold limit of $50 billion mostly abstained from M&A activities in 2018. We believe there was no imminent effect on larger bank M&A activity for three reasons:

As investors believed that the deal valuations were stretched5, shareholders expressed a preference for share buybacks and dividends over acquisitions.6 Some of the banks that pursued acquisition opportunities saw an immediate and significant drop in share prices following the announcements, indicating the market’s disapproval of that use of capital.

Consequently, banks chose to prioritize capital returns to shareholders. Even those banks with total assets up to $50 billion, the most active group in terms of M&A, saw a significant increase in equity capital distribution starting in Q1 2018 (Figures 3 and 4). By Q3 2018, banks returned a total of $3.8 billion, of which $1.6 billion were repurchases. Those repurchases, however, were focused on bigger banks (Figure 4), likely due to smaller banks with less than $10 billion of total assets facing illiquidity in their traded shares. Interestingly, the payout ratio for both groups of banks was unchanged at around 30 percent, indicating that banks overall were reluctant to commit to higher levels of payout going forward and that they preferred to treat the capital returns as one-offs in nature—potentially to use future available capital differently. Note that the payout ratio in Q4 2017 was up significantly, due to lower earnings caused by the tax rate regime change and the resulting initial negative markdowns of some assets in Q4 2017. 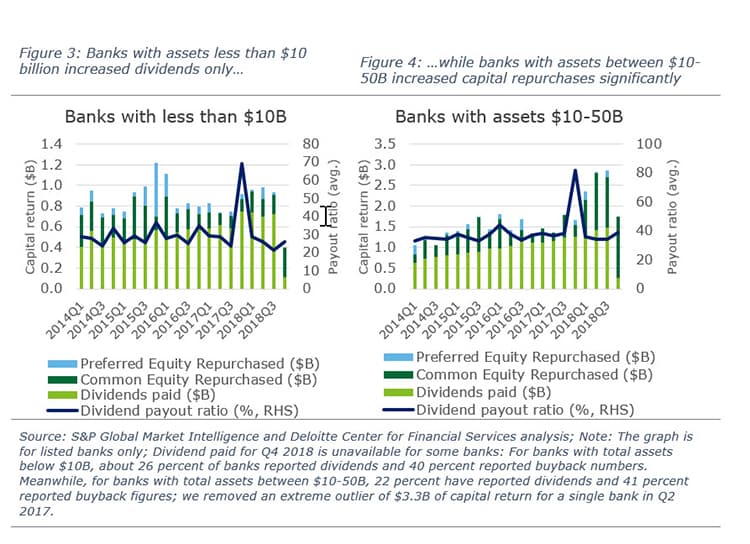 Banks are willing and prepared to do more deals in 2019

We see that the M&A landscape in 2019 could look more positive with continued consolidation among smaller banks due to continued capital availability and a supportive regulatory environment. These factors are likely to encourage bigger players to pursue acquisitions in a bid to strengthen their scale and scope of their geographic footprint, product portfolio, or technology capabilities.7 Despite a recent recovery in banks’ share prices, valuation levels are relatively more attractive than in 2018. This may entice sidelined buyers to engage in deal making and shareholders to be more supportive of deals.

For a more detailed M&A activity analysis across the sectors of specialty finance, fintech, investment, and wealth management as well as for a broader overview of trends and drivers of 2019 M&A activity, please see our 2019 Banking and Capital Markets M&A outlook: An open door for deal making report.

What M&A trends and activity do you expect to see in the banking industry this year?

Jan Schoeps is a research manager at the Deloitte Center for Financial Services. In his role, he researches and writes on banking and capital markets topics. He has more than seven years of experience... More

Are there gender differences in banking behavior?

Insights on the Banking and Capital Markets Outlook