Japan Economic Outlook: The pandemic adds yet another delay to Japan’s economic recovery

CFO Insights is a monthly publication that delivers an easily digestible and regular stream of perspectives on the challenges confronting CFOs. In this month’s edition, we share the latest Japan Economic Outlook, published on Sep 21st.

Despite pandemic-related challenges, Japan is positioned for stronger growth later this year and into 2022.

Japan’s struggles with the COVID-19 pandemic have delayed its economic recovery. Extended states of emergency have zapped demand for in-person services, which indicates consumer spending may have remained weak in Q3 2021. Nonetheless, higher vaccination rates should help put an end to the state of emergency, allowing spending to pick up before the end of the year. Manufacturing—helped by strong domestic and foreign demand—has been a notable bright spot for the Japanese economy. Unfortunately, high input costs, shortage of raw materials, and shipping delays are restraining the growth of goods producers. It is true that some inflationary pressures are building, but they will likely prove insufficient to warrant a change in policy from the central bank. Furthermore, the future course of fiscal policy has entered uncertain waters as the prime minister unexpectedly announced his decision to not run for reelection.

After a brief respite in late spring, infection rates began to rise significantly over the summer. As a result, at present, 21 of the country’s 47 prefectures are under a state of emergency that is expected to last into late September.1 Tokyo has been under a state of emergency since July 2021. As per law, these lockdown restrictions cannot be made mandatory. Although the National Diet, Japan’s legislature, passed a law that allowed the government to fine businesses that were not complying with restrictions, its lenient enforcement allowed people to flout the rules.2 It is this low compliance with restrictions, combined with new, more contagious variants of the virus, that has contributed to the recent surge in infection rates. The number of confirmed cases had reached new highs by August and hospital beds were rapidly filling up in the most affected areas.3

Consequently, the most recent outbreak has lowered expectations for GDP growth in 2021. The International Monetary Fund4 and the Bank of Japan5 both lowered their forecasts between April and July. Additional downward revisions could be on the horizon. Moreover, the outbreak has worsened since July, and recently Japan reported its first case of the new Mu variant. Although not much is known about this variant yet, officials are concerned that it could be vaccine-resistant and more contagious than earlier variants.6 If these concerns turn out to be true, renormalizing the economy will prove to be a challenging task.

Although the vaccine approval process in Japan had been fairly slow, vaccine dissemination has been notably faster. As of September 1, 46.9% of the population was already fully vaccinated—just 5 percentage points lower than in the United States7 (figure 1). In some countries, vaccine hesitancy has slowed the pace of vaccination. However, the pace of vaccine dissemination remains strong in Japan, which is still giving out doses to about 1% of the population each day, a staggeringly fast pace compared to many other rich countries.8

This article was originally published on Deloitte Insights on September 21,  2021. Reproduced with permission. 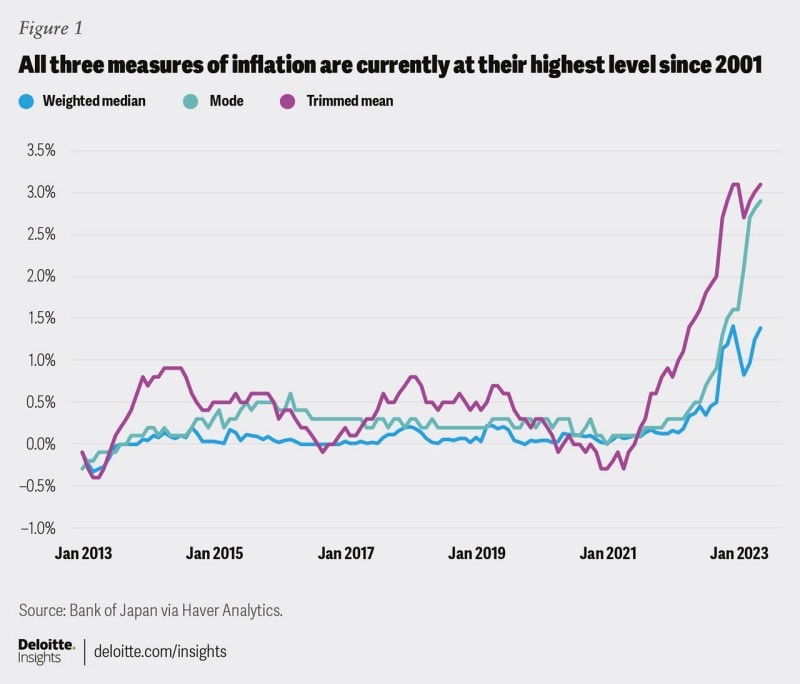 The growing number of cases and the extended states of emergency have understandably weakened demand for in-person services such as restaurants. The au Jibun Bank’s Purchasing Managers’ Index (PMI) for services dropped to 42.9 in August, the lowest reading since May 2020.9 A reading below 50 indicates the sector is contracting. Retail sales had perked up in June and July, when most of the country was no longer under a state of emergency—posting an increase of 3.1% and 1.1%, respectively.10 This, however, was not enough to make up for the losses seen in April and May. Consumer spending likely slowed in August and September. Mobility near retail and recreation establishments deteriorated throughout August and was 17% below the prepandemic levels as of September 14.11 Consumer confidence also ticked lower in August.12 The extension of the state of emergency does not bode well for spending in September either. However, early signs that the current wave of infections is waning provides optimism that spending can pick up thereafter.

Reversal of deflation on the horizon

Low inflation and at times outright deflation have given consumers additional purchasing power. Indeed, the Consumer Price Index (CPI) was down 0.3% from a year ago in July (figure 2).13 Telecommunication prices, which were down 25.7% year over year,14 held down the headline number. Policymakers recently pressured telecom companies to lower their prices, forcing the downward adjustment in the CPI. Other categories, meanwhile, are seeing stronger growth. On a year-ago basis, utility prices were up 2.2%, furniture and household utensils were up 2.4%, and reading and recreation were up 1.9%.15 Housing and clothing prices were also higher compared to last year, albeit only modestly. Furthermore, policies to lower the cost of early childhood education had previously held down the price of education services, but these prices too witnessed a year-over-year rise (1.1%).16

Even after excluding telecoms, inflation is still running well below the Bank of Japan’s 2% target, allowing for a continuation of its easy monetary policy. With the US central bank signaling that it will begin to taper its bond purchases,17 the yen may depreciate further against the dollar. Yen depreciation will raise the cost of imports, particularly commodities, such as oil, that are priced in dollars. Commodity prices have already surged across the globe. The higher cost of inputs, such as steel and lumber, contributed to a 5.6% year-ago gain in producer prices in July.18 Although the cost of lumber has somewhat eased since, most other commodity prices remain elevated, creating some inflationary pressure in the pipeline.

For inflation to persist, it would likely require stronger wage growth. For decades, low wage growth and low inflation have gone hand in hand in Japan, which seems likely to continue. Wage growth has been fairly stagnant recently—total cash earnings in June were virtually no higher than they were a year earlier despite weakness last year.19 Contractual cash earnings, which exclude certain types of compensation, such as bonuses, have been a bit stronger, but they remain firmly below prepandemic levels.20

Japan’s manufacturing sector has held up far better than the services sector (figure 3). Manufacturing production was up 11.7% in July compared to a year ago.21 As spending on in-person services plummeted during the pandemic, goods purchases ramped up, a trend evident in many countries around the world. Foreign demand has also supported growth in the manufacturing sector. In July, goods exports were 37.1% higher year on year.22 Furthermore, Japan is an important player in the semiconductor industry, providing critical components needed in the chipmaking process. As demand for goods has surged around the globe, so too has demand for the semiconductors used in many of those goods. Japan’s production of electronic parts and devices, which includes integrated circuits, surged 26.1% year over year in July.23 However, more recently, manufacturing growth has slowed. The au Jibun Bank manufacturing PMI dipped to 52.7 in August, which indicates that the sector is still expanding, although at a slower rate than what was seen earlier this year. The PMI’s exports order subindex slipped into contraction territory, highlighting some of the challenges exporters face, including a lack of raw materials and the longest lead times since the 2011 earthquake and tsunami.24

As some of the pandemic-related supply constraints ease, Japanese exporters could see better conditions. Input prices, the cost of shipping, and lead times should all improve. Demand for Japanese exports could also pick up. Furthermore, Japan, along with China, Singapore, and Thailand, ratified the Regional Comprehensive Economic Partnership (RCEP), a trade agreement that covers about 30% of the world’s population and output.25 The pandemic has delayed other countries’ ratification, which is a requirement for the multilateral agreement to become effective. Some analysts expect that to occur sometime next year.26 Once it goes into effect, the RCEP could add US$500 billion to global trade by 2030.27 The partnership is particularly important for Japan as it lowers tariffs for Japanese exports to China and South Korea, two of its three largest trading partners.

Allowing the Olympics to go as planned proved widely unpopular in Japan, especially as it coincided with rising infection rates and extended lockdowns in some of the most populous areas of the country. As a result, the popularity of the prime minister, Yoshihide Suga, plummeted.28 Furthermore, Japan is scheduled to hold a general election before November 30 this year. Although it was expected that Suga would be reelected despite his drop in popularity, he announced that he would resign to focus on battling the pandemic rather than spending time in an election campaign.29 This has opened the door for other candidates. One of the early front-runners, Fumio Kishida, has advocated for additional economic stimulus, which could amount to “several tens of trillion yen.”30 Regardless of who wins the general election, the new prime minister may find it difficult to pass their legislative agenda. Based on the current electoral mood, the ruling Liberal Democratic Party is expected to win the general election, but it risks losing its two-thirds supermajority in the lower house,31 which could restrain planned spending.

After a series of pandemic-related challenges, Japan is positioned for stronger growth later this year and into 2022. Once the state of emergency ends, spending on services should rebound. At the same time, demand for goods should stay relatively strong. Easy monetary policy and the possibility of additional fiscal stimulus could add a bit more inflation and help lift stagnant wages. Of course, this is not the first time during the pandemic that Japan was poised for stronger growth. The presence of new variants could extend lockdowns and create more challenges in manufacturers’ supply chains. Hopefully, rising vaccine rates will be enough to allow for more in-person activity and usher in the long-awaited rebound in economic growth.