On 31 August 2022, Japan’s Financial Services Agency (FSA) announced (in Japanese) the publication of its request for tax revisions for fiscal year 2023. One of the proposals in the FSA’s request is an exemption from corporate taxation for net unrealized gains on crypto assets, which currently are subject to taxation based on year-end mark-to-market valuation. However, there is some confusion in financial blogs and on social media that the FSA also proposed to change individual taxation on gains realized on crypto assets held in a Nippon Individual Savings Account (NISA) from the current marginal rates (which can be up to 55.945%) to a flat 20.315% rate (similar to how individuals are taxed on capital gains from other securities). This is incorrect, and the confusion may originate from a combination of certain factors, which are discussed below. As an initial matter, an overview is provided below of capital gains taxation of individuals and corporate taxation based on mark-to-market valuation.

Capital gains from the sale by individuals of certain securities (such as shares) are taxed separately from other sources of income at a flat rate of 20.315% (15.315% national tax and 5% local inhabitant’s tax). Capital losses on the sale of publicly traded shares made through a qualified Japanese broker can be carried forward for three years (individuals that hold brokerage accounts in foreign jurisdictions may not carry forward such losses).

Unlike securities, capital gains on the sale of crypto assets are taxed as miscellaneous individual income and subject to individual income tax rates. As such, rather than being subject to a capital gains tax of 20.315%, the investor may be subject to a marginal tax rate of up to 55.945% (45.945% national tax plus 10% local inhabitants tax) on the sale of crypto assets. The marginal tax rate applied depends on the individual’s total taxable income, as indicated in the table below: 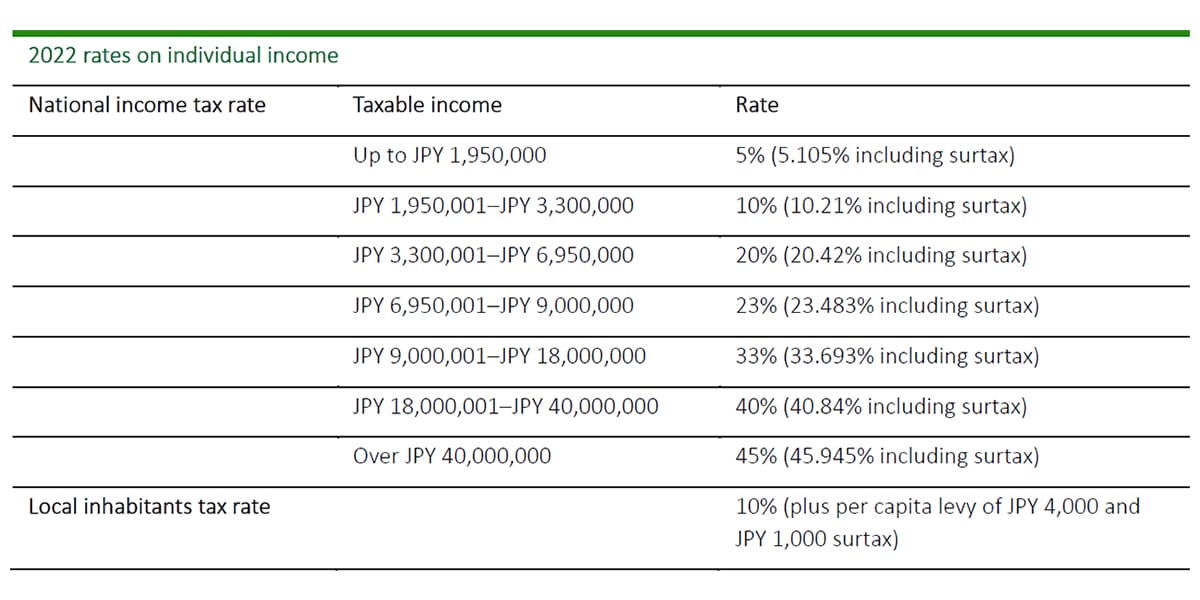 Corporate taxation based on mark-to-market valuation

Companies, such as those that issue crypto assets or have an active market buying and selling such assets, subject to taxation based on mark-to-market valuation are taxed at a rate of 30% on net unrealized gains of certain assets held at the end of the tax year. The gains are determined based on the market value of the assets at the end of the tax year, and tax is imposed even though the assets continue to be held and no profit (or cash flow) is realized.

This tax rate of 30% has been viewed as a hindrance to innovation in the Web3 space (an internet concept that incorporates ideas such as decentralization, blockchain technologies, and token-based economics) and as creating an exodus of talent and innovation to foreign jurisdictions with lower tax rates. In some instances, a resulting large tax payment may deplete a company’s cash reserves, which may increase the risk of the company being able to continue operating. 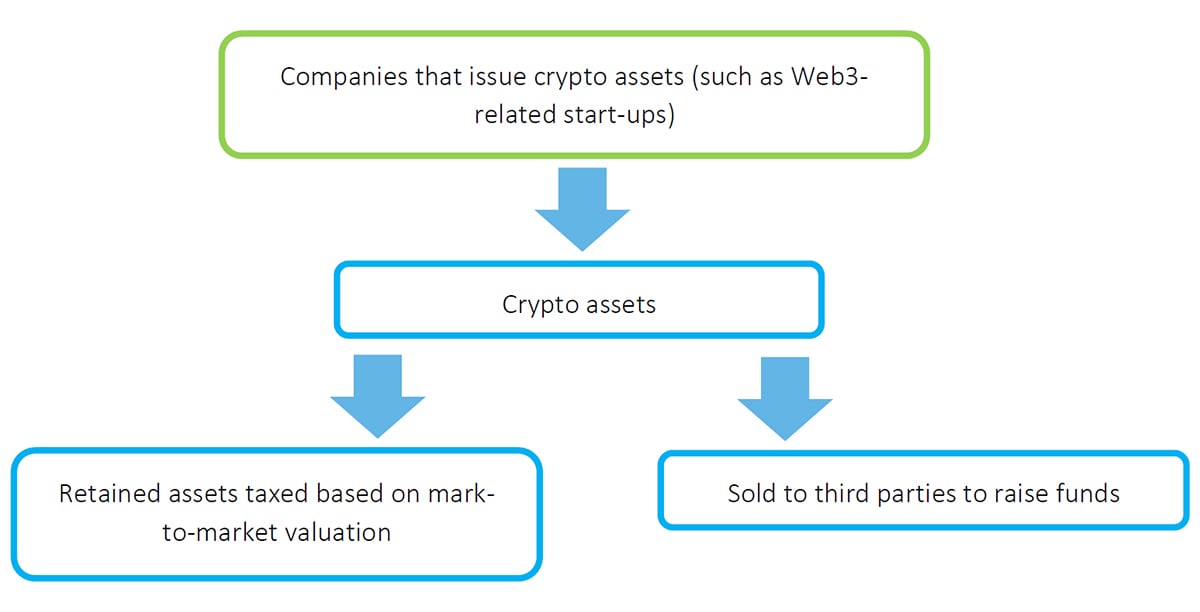 As mentioned above, the confusion in financial blogs and on social media that the FSA proposed to change individual taxation on gains realized on crypto assets held in a NISA from the current marginal rates to the flat tax rate for capital gains may originate from a combination of certain factors.

The financial press had reported on the FSA’s proposed changes and, at the same time, included commentary on the JCBA and JCVEA’s proposals, as well as the prime minister’s economic policies. In turn, financial blogs and social media misread the financial press reports, which resulted in the dissemination of incorrect information.

To be clear, the FSA has not proposed any changes to the individual taxation on gains realized on crypto assets held in a NISA – individuals will continue to have such gains taxed as miscellaneous individual income subject to marginal rates. The FSA only has proposed (1) to eliminate the corporate taxation on net unrealized capital gains on crypto assets based on mark-to-market valuation and (2) to raise the NISA investment limits and make the scheme permanent.

The tax panel of the Liberal Democratic Party will debate the FSA’s request for revisions before making an announcement this December of the final reforms (from all government departments), which final reforms will be ratified into law before the start of fiscal year 2023 (i.e., March 2023) by the Diet.

As crypto asset investing increases in popularity and the number of retail investors and types of assets grow, individuals should be aware of the tax risks they may face. In some financial blogs and on social media, the interpretation of proposed policy changes suggesting that individual investors will be taxed differently as from 2023 is incorrect.

Such information may result in some investors making tax-based investment decisions that may see them facing a larger tax expense than originally anticipated.

Separately, the news related to proposed corporate tax reform in the crypto asset space should be welcomed as it signals ongoing changes to the Japanese economy to increase its competitiveness relative to its regional peers.

Kensuke joined a Tokyo branch of a major foreign bank in 1994. After retiring, he obtained a qualification as a tax accountant and in 1998 joined a foreign accounting firm (taxation). There, he was se... More