One of the positive effects of Brexit for China is the change in the Fed’s position on its projected rate hike, which is now firmly on hold. This has allowed the PBOC to lower the RMB exchange rate at a faster pace in a much more benign environment. Indeed, the RMB has hit repeated 6-year lows in the wake of Brexit: 6.69 on July 14 being the latest one. Against a backdrop of slower global economic growth (the UK could be in recession by 2017) and continuing use of unorthodox monetary policies by major central banks, China has to remain vigilant and learn from previous external shocks.

The chief lesson to be learnt from the global financial crisis of 2008 is that the cost (over-capacities and worsened asset quality) of a large fiscal stimulus can outweigh the benefits. Therefore, in our view the best policy choice when faced with an external shock is to slash GDP growth targets from “at least 6.5%” to perhaps 5%, and to adjust the RMB exchange rate against the USD as Brexit is likely to make the dollar a safe haven. Contrary to many observers’ fears, most Asian currencies have stayed stable against the USD in recent weeks despite the RMB’s persistent slide. This has vindicated our hypothesis that the market has been anticipating the long-overdue adjustment of the RMB against the dollar. PBOC’s tolerance of RMB’s weakness means that it does not have to run down reserves as it has been doing for almost a year. Encouragingly, June foreign exchange reserves have posted gains of about $13bn, ending at $3.21trn.

At the same time, we would like to reiterate our view that a flexible RMB exchange rate is not about competitiveness. In spite of the RMB’s massive appreciation against most currencies in recent years, there is no evidence that China lost market share in developed countries. However, a cheaper RMB is making China’s monetary policy more potent in a situation where short term interest rates have little room to fall. To put the magnitude of “devaluation” in perspective, the RMB has only depreciated by 10% against the USD from its all-time high of 6.04 (Jan 2014). As recent data on foreign exchange reserves indicates, a meaningful adjustment would deter capital flight and discourage moral hazard (corporate borrowings in USD with the assumption that the Government will guarantee a stable exchange rate). In addition, a weaker RMB would make the necessary adjustment of the manufacturing sector less painful. That said, using the RMB exchange rate as a monetary lever does not mean that China should stick to very ambitious GDP growth target.

On the latest development, 6.7% of GDP growth of 1H 2016 has surpassed the market expectations, but such out-performance has come with certain prices (mainly divergence between investment of SOEs and private sector and continued rise in leverage in the economy). Again, we would like to rehash our long-held position that a relatively tight labour market (which is still the case now) in China means that policymakers won’t have to worry about the social cost of a slower GDP growth. Perhaps the real silver lining of Brexit is that it will force China to revise its internal policy targets as the global economic environment becomes more challenging. 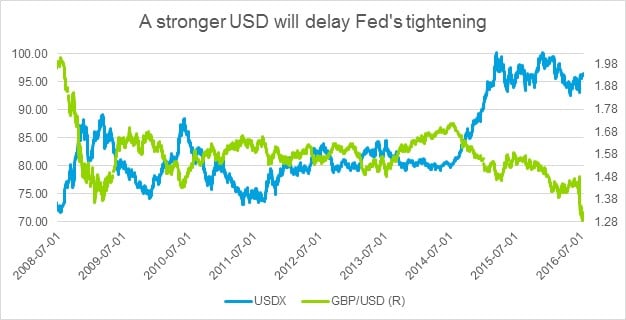 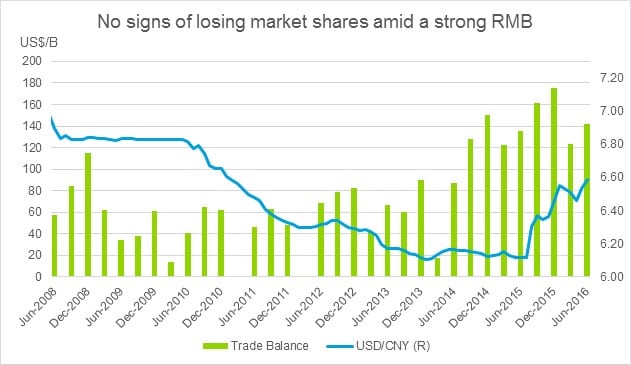 In spite of the boom in online sales, overall retail growth has been sluggish, announced the National Bureau of Statistics of China. Total retail sales of consumer goods reached RMB15, 613.8 billion in the first six months of 2016, a year-on-year increase of 10.3 percent, 0.11 percentage point lower than the same period in 2015. From January to June, the national online retail sales of goods and services topped RMB2, 236.7 billion, a 28.2 percent year-on-year increase, much higher than the growth rate of the overall market. It is also worth noting that total retail sales of consumer goods in the month of May went up by 10% only, the lowest monthly growth since 2012. What is more worrying is the fact that China's consumer confidence index slid all the way down to 99.8 in May, its lowest level since 2014.

On July 3, Huimei Group, owner of internet brands Yinman and Chuyu, submitted an application to be listed in the GEM, becoming yet another internet retailer that has filed for IPO status after Liebo. More than 50 internet brands, including Three Squirrels and HSTYLE have expressed their intention to go public. Thanks to the rapid growth of internet retail sales over the past several years, numerous “small-but-cute” online brands have been experiencing explosive growth and gradually migrating into multi-platform brands. As these brands seek market domination, they are faced with new challenges. Rebranding, talent acquisition, finding the funding for expansion, management improvement and Omni-channel development could all become real issues for the next stage of development of these brands. Their needs are a potential source of new business opportunities for Deloitte.

Strategic Implications of CBN as the Fourth Telecom Operator

On 5th May, the Ministry of Industry and Information Technology (MIIT) granted the "Basic Telecom Service Operating License" to the state-owned China Broadcasting and Network Co. (CBN), making CBN the fourth player in a market long dominated by the "big three" telecom operators.

In the medium to long term, there are two main implications:

In the future, telecom industry reform will move towards not only promoting competition through the involvement of more market players, but also strengthening cooperation within the industry and with private enterprises. As far as innovation in services is concerned, integrated services such as internet protocol television (IPTV), mobile TV, cable TV broadband service and the like will be further developed and expanded. In terms of technological innovation, products compatible with "three-network convergence" such as interactive television service platforms will be developed and produced.

For CBN, the short term strategy should not be about trying to surpass existing telecom operators but rather on figuring out how to integrate current TV networks into something more profitable. One option is to learn from its US peers such as Comcast. Potential key moves include product innovation, partnership with telecom operators, strong control of family market, aggressive M&A in media content and future technologies (e.g., music, VR). It also needs to simultaneously integrate with regional broadcast/TV players (who are not always easy to work with since many of them are not at all market-oriented).