How does fintech in Japan compare to the rest of the world? Bookmark has been added

How does fintech in Japan compare to the rest of the world? Bookmark has been removed

An Article Titled How does fintech in Japan compare to the rest of the world? already exists in Bookmark library

How does fintech in Japan compare to the rest of the world?

Fintech is a major buzzword around the world today. How do fintech environments around the world differ? Deloitte Tohmatsu Consulting Social Impact Director Yasuyuki Ogyu talks about the state of Japanese fintech, issues it faces, and the possibilities it holds.

Most of the world’s venture capital investment into fintech is concentrated in China and the US, followed by the UK. The main factors producing these rankings are the size and features of these countries’ B2C markets, as well as the positioning of their respective countries as global financial centers.

For example, in China with its population of 1.3 billion, and in the US with its population of 300 million and its wide-ranging socioeconomic classes, the B2C business sector is broad, and its market is huge. Because of their own financing issues, these countries are popular options as investment destinations. Moreover, these countries have advantages in that they possess world financial centers such as New York, Hong Kong, and Singapore.

By contrast, despite having a favorable B2C market environment with a population of 130 million, Japan’s rock-solid yet inflexible financial infrastructure (i.e. ATMs and bank IT systems) means that venture capitalists cannot expect a quick return on their investment. As a result, it is difficult to attract investors, and the development of new financial business tends to lag behind other nations.

From a global perspective, although Tokyo has moderate attractiveness as a fintech hub, it occupies a relatively low place among the world’s financial centers. Two reasons for this are the difficulty in obtaining regulatory licenses (lack of transparency) and in producing innovation, compared to other financial centers.

As for what features Tokyo could offer as a fintech hub, there is substantial support from the Japanese government. However, in terms of innovation culture and consumer demand for fintech, Japan is inferior to other countries, and it is unlikely to become attractive as a fintech hub in the near future. “Enlightenment” on the part of society and consumers is vital: society needs to be more accepting of fintech, and consumer awareness needs to change. 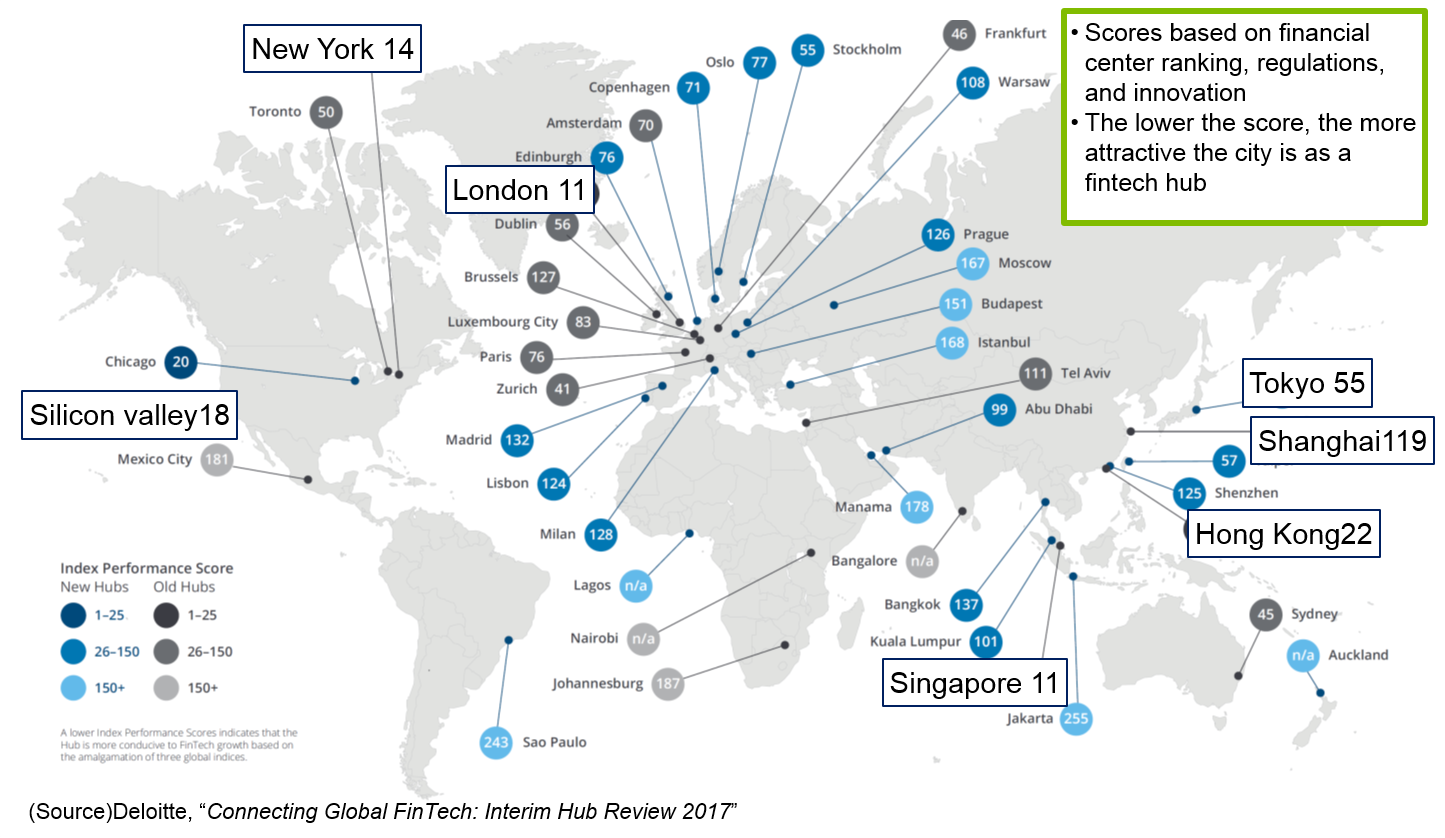 ■ How developed U.S. banks’ fintech is

Leading US banks employ a large number of in-house systems engineers to develop and implement their very own fintech, allowing them to deliver results at a speed that far exceeds that of Japanese financial institutions.

Let’s look at the “sophistication” of US banks’ fintech in terms of data utilization, customer reach, and fintech-supporting infrastructure using JPMorgan Chase as an example. In the area of data utilization, JPMorgan Chase partnered with Intuit on an API, which it used to begin allowing external access to JPMorgan Chase’s data. In the area of customer reach, it partnered with OnDeck to speed up the screening process for online financing. And for fintech-supporting infrastructure, JP Morgan JPMorgan Chase developed Quorum, its very own blockchain platform, with the support of 40,000 in-house systems engineers.

Goldman Sachs has also been working on similar initiatives. In the area of data utilization, Goldman has used AI to reduce employee headcount—in just one example, it went from 600 cash equity traders to only 2—and it is also increasing internal use of Kensho, data analytics software. In the area of customer reach, it established GS Bank, an online bank that allows customers to open savings accounts with as little as $1. Goldman Sachs is also providing financing to the operating companies of encrypted messaging services, and market players use such chat services to communicate with each other in their work. One third of Goldman Sachs employees—9,000—are systems engineers, and Goldman possesses its own internal blockchain development function. It is likely that such a well-nurtured organization is what’s supporting the company’s fintech infrastructure.

In contrast to this, Japanese financial institutions’ fintech efforts are stuck in the verification stage, and few have progressed to implementation stage. Whereas US banks make this possible by using in-house engineers to develop things internally, Japanese financial IT systems, on the other hand, possess two major characteristics that hinder change. First, they are built on an core-banking model that centralizes authority, which is a high barrier to making progress on new initiatives. Second, the Japanese market demands IT systems that constantly maintain a high level of quality, such that the duration of any system crash is severely limited. As a result, only a small portion of IT expenses is allocated to new development.

■ Differences in views on systems in Japan and the U.S.

In Japan, due to the high level of quality demanded of IT systems, their fortress-like construction consists of a sturdy “outer wall” for defense and a robust “inner core”, making them ill-suited (in terms of speed and cost) to new initiatives like fintech. If such a situation continues for too long, it may impede innovation. 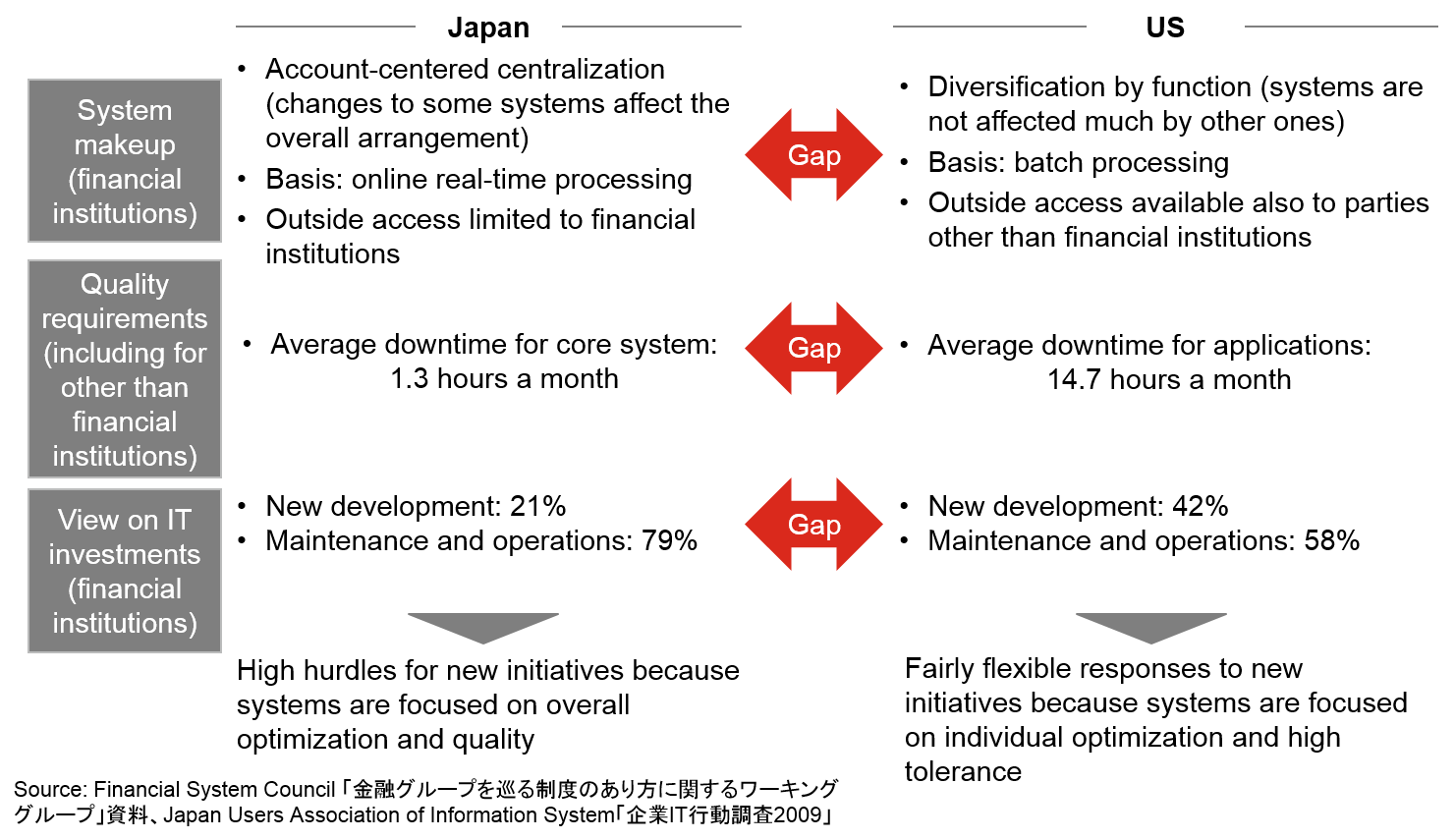 Differences in views on systems in Japan and the U.S.

Use of blockchains in the public and non-financial sectors is increasing in Europe and North America, and conditions appear to be becoming ripe for the formation of ecosystems that involve the finance industry. In Japan, by contrast, although initiatives are vigorously moving forward in the financial sectors, there are still few success stories from the public or non-financial sectors. Blockchains are the most suitable system for the formation of ecosystems, but considering their current situation in Japan, this may end up delaying future ecosystem initiatives in Japan.

In Europe, there are already laws being created in regard to payment intermediaries. There is a strong belief that personal information and the right to consent to its use should belong to individuals.

In Japan as well, revisions to the Banking Act have made it easier to introduce financial services that utilize APIs. However, because such data-based services do not have a high rate of market penetration, it is first necessary to educate society on the significance of shifting to services that utilize personal data. APIs allow various companies to use the same data, enabling the formation of ecosystems on the industry side, and ecosystems that make it possible for companies to use that data to provide services to customers are vital.

In revising its laws and regulations on funds settlement, Japan became the first country in the world to clarify its legal position on cryptocurrencies. By establishing how cryptocurrency exchange service providers will be treated, the Japanese government has paved the way for the creation of mechanisms to protect customers and is facilitating transactions in cryptocurrencies. Another notable characteristic about Japan is that digital currencies have been far more successful here than in other countries, suggesting that Japan is unique in its efforts to popularize e-money. If further development can be achieved, then we can expect healthy growth in financing via initial coin offerings.

Beyond Fintech: A pragmatic assessment of disruptive potential in financial services