Covid-19: A Wake-Up Call to the Future of Management in the Era of the SDGs

Strategy with Sustainability in the "With/After Covid-19" Era

The Future of Management in the Era of the SDGs has become a necessity sooner than originally expected.

Companies at a crossroads – How should Sustainability be dealt with in Covid-19 Crisis?

Companies at a crossroads – How should Sustainability be dealt with in Covid-19 Crisis?

As national governments in various countries greatly restricted production activities in response to the spread of Covid-19, many companies were swamped with tasks at hand to address this restriction, such as basic infection prevention measures and remote working. Nevertheless, companies have not yet started on revising their business strategies to reflect the fundamental economic and social changes this pandemic is likely to bring, although they are at a crossroads.

Before the pandemic, many companies mentioned “SDGs” (the UN’s Sustainable Development Goals), and “sustainability” as keywords alongside “globalization” and “digital transformation”, while developing their purpose, long term (2030, 2050) vision and medium-term management plans. How will and should these items be addressed in the era with/after-Covid?

Covid-19: A Wake-Up Call to the Future of Management in the era of the SDGs(PDF, 1.2MB)

The contributors to this article were among the authors that wrote the publication “The Future of Management in the era of the SDGs” (Monitor Deloitte, Nikkei Business Publications, 2018, Japanese and Korean only). In the book, one key question was "How should company leaderships understand the SDGs?" Companies must not only identify short- and medium- term opportunities (for offense strategies) and threats (for defense strategies), but also understand the social issues that need to be solved for the company’s long-term growth to be possible, and use all of that to devise a business model (foundation) in which society improves the more the company’s revenue increases.

Figure 1: Positioning of SDGs in the eyes of company leadership 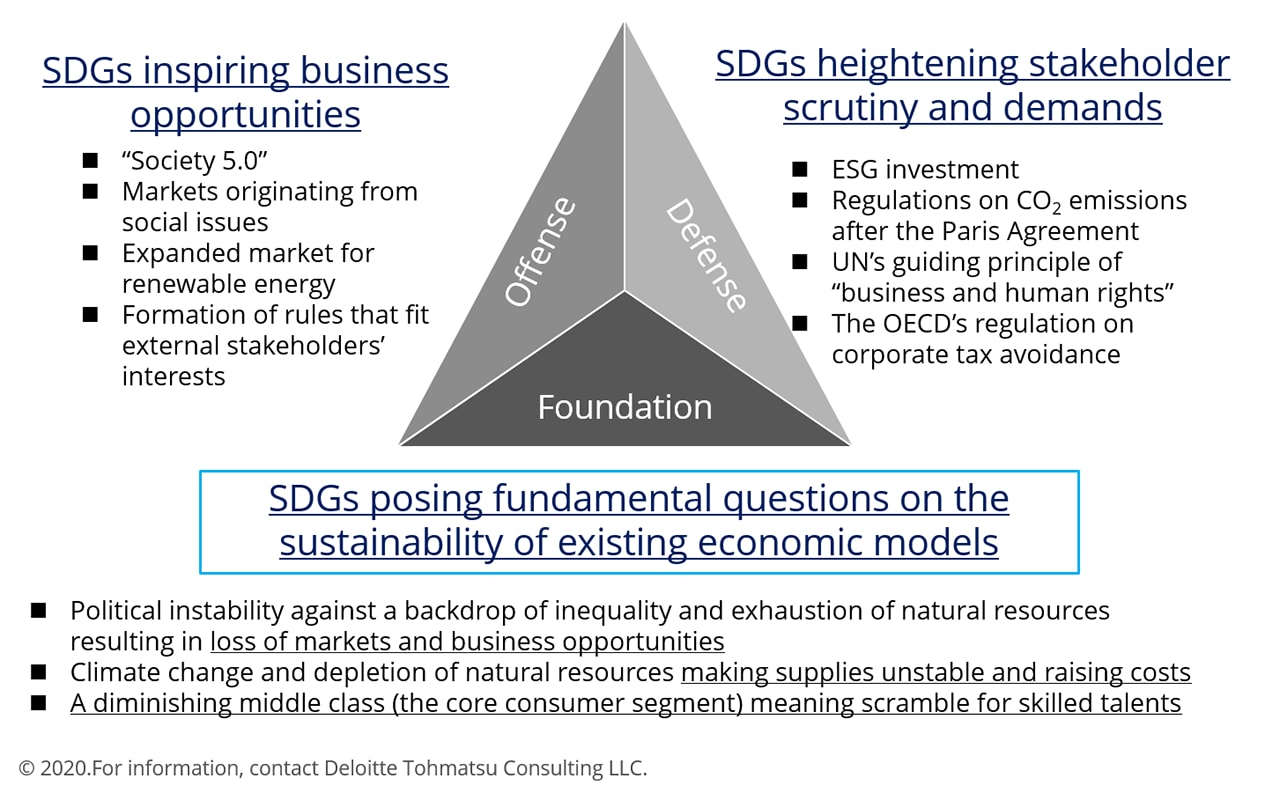 Different companies strategically position sustainability in different ways, and those companies that have long realized that sustainability is indispensable to their long-term growth, and have attempted to position it as the foundation of their purpose and strategies will likely use this Covid crisis as a watershed moment to further accelerate the integration of sustainability with their management strategies. On the other hand, companies that have not seen the need to reform any part of their core business and view the SDGs as a merely communication tool, or companies who view the SDGs only as potential new business areas to consider as fiscal capabilities allow, may, in the face of deteriorating performance due to the pandemic, rush to rebuild the core business while deprioritizing sustainability which they see as costs to be minimized.We share the perspectives of the former, and believe that Covid should work as a wake-up call for companies to adopt more sustainable management, for the following three reasons:

1. The covid crisis has shown a glimpse of a world of 2030 where the SDGs have not been achieved

The Covid pandemic is being described as an unprecedented crisis in Japan and other developed nations but in actuality, the world had already faced a serious pandemic by the time of the MDGs: Millennium Development Goals (the predecessors to the SDGs) era of 2001 – 2015.

The first case of HIV/AIDS was discovered in the US in the 1980s, but it then quickly ravaged poor nations such as those in Africa fueled by poverty and discrimination, and had a catastrophic social ramifications; by the time the MDGs were adopted, average life expectancy in some nations had already fallen to thirties. The affected countries and the international community mobilized resources and policies to tackle the AIDS crisis under the banner of the MDGs, and demonstrated that pandemic could be put under control. The lessons learned during this intervention included the need to protect the privacy of those tested positive with the virus and the human rights of the high-risk populations in order to encourage them to seek testing and treatment, which is vital for preventing the wider spread of the virus. For this and other reasons, the AIDS crisis really does hold many implications about the questions we are facing with the Covid crisis.

In fact, to date, some African countries, with their accumulated experience in fighting the AIDS pandemic, have actually managed to prevent an overshoot of Covid infections better than Japan and the rest of the world by taking more rapid and comprehensive measures, despite the fragile health systems and some housing conditions such as slums hindering social distancing practices. South Africa, for example, instituted a lockdown before anyone had died of the disease, PCR-tested more than 10,000 people a day, and sent alerts and health information to residents via a mobile application that would later be recommended by the WHO.

In contrast to the MDGs, which only targeted the 3 most infectious diseases of AIDS, tuberculosis, and malaria, the SDGs expanded this scope to include "neglected tropical diseases (NTDs), hepatitis, waterborne diseases, and other infectious diseases". In that expansion is the determination to use the knowledge and experience gained from the MDG era to eradicate the sufferings that any infectious disease causes. The fact that countries who experienced the diseases in the MDGs are using those experiences in their Covid measures says a lot.

2. The interlinkages between the “E” and the S”: perspectives of “planetary health”

”Planetary health” is a new concept launched jointly by the Rockefeller Foundation and the internationally renowned medical journal, The Lancet, which looks into the “health of human civilization and the state of the natural systems that it depends on”. Under this concept, various interdisciplinary researches are being implemented to investigate the human health consequences of the disruptions to the eco-systems caused by human activities.

According to such research, most of the new diseases that have emerged in recent years such as the ebola, bird flu, the Nipah virus, MERS, SARS, West Nile fever, and the Zika fever are zoonoses (or zoonotic diseases; diseases that pass between humans and animals/insects). Covid-19, which is thought to have originated in bats, is another example. Increased opportunities for human-animal contact due to the shifting of wild animals’ habitats is thought to be behind the frequent occurrence of zoonoses, and human activities such as deforestation, natural resource extraction, farmland clearing, road construction, dam construction, irrigation, coastal development, and urbanization are drivers of habitat shift. The environmental group WWF has calculated that 60% of the species on the planet have become extinct over the last 50 years , while Unicef’s statistics show that the number of new infectious diseases discovered have quadrupled over the last century .

Loss of biological diversity also damages nature’s climate stabilizing function, which accelerates global warming more so than the direct effects of manmade greenhouse gas emissions, and has started a chain reaction that leads to further loss of species. This vicious circle further increases the risk of future pandemics.
At first glance, the pre-pandemic socio-economic megatrends such as circular economy and decarbonization seem set to be overshadowed by the short-term impact of Covid-19 and take a backseat to other priorities in the post-crisis world. However, given that the way in which we use resources for economic activities is behind the current and future likely pandemics, there is actually a greater scientific case for those megatrends to gain further momentum.

3. Resisting the urge for a V-shaped recovery : emerging “build back better” conditionalities to corporate bail-outs

The Japanese government is planning budgets and other measures for a V-shaped recovery after the state of emergency declaration is lifted. However, the international community and capital markets are demanding hat companies to shift to a new economic system that places sustainability at the center.. In his message on the International Mother Earth Day, United Nations Secretary General Antonio Guterres stressed the need to use the Covid pandemic as an opportunity to “build back better” and proposed “6 climate-related actions” that included requiring companies to commit to achieving green jobs and sustainable growth as a condition for receiving taxpayers’ money in relief funds.

Similar developments are happening at the national level. In Europe, at the urging of some members of the European Parliament, 180 government leaders, corporate executives, and representatives of unions, NGOs, and think tanks are calling on member states to place the EU’s recently announced Green Deal at the center of post-Covid economic recovery efforts. The Green Deal calls for an accelerated transition to a carbon neutral economy.

Some governments are implementing policies that impose requirements on companies to reduce their environmental footprints such as in the case of airlines, who are finding themselves in a precarious situation due to lockdowns. In response to their requests for bailout, some governments are requiring the airlines to commit to decarbonization efforts such as reducing short-haul routes, working with railway operators, and using biofuels as a condition for receiving state aid.

Strategy for the “New Normal”

Although the exact form of the post-corona world is yet to reveal itself, it seems reasonable to anticipate that one feature of the emerging “New Normal” will be that sustainability (SDGs and ESG) will be viewed as a must, as opposed to optional, where a company’s sustainability efforts will be a major driver of its competitiveness.

With this New Normal in mind, what strategy approaches will companies take?

First, Covid’s social impacts can be grasped in a comprehensive manner when measured against the SDGs. Monitor Deloitte‘s CSV/Sustainability Strategy team has utilized its own global knowledge and publications from NGOs, international organizations, and other experts to prepare a preliminary summary of the main effects Covid will have on each of the 17 SDGs (figure 3).

Figure 2: Effects of covid-19 on the 17 SDGs (preliminary version) 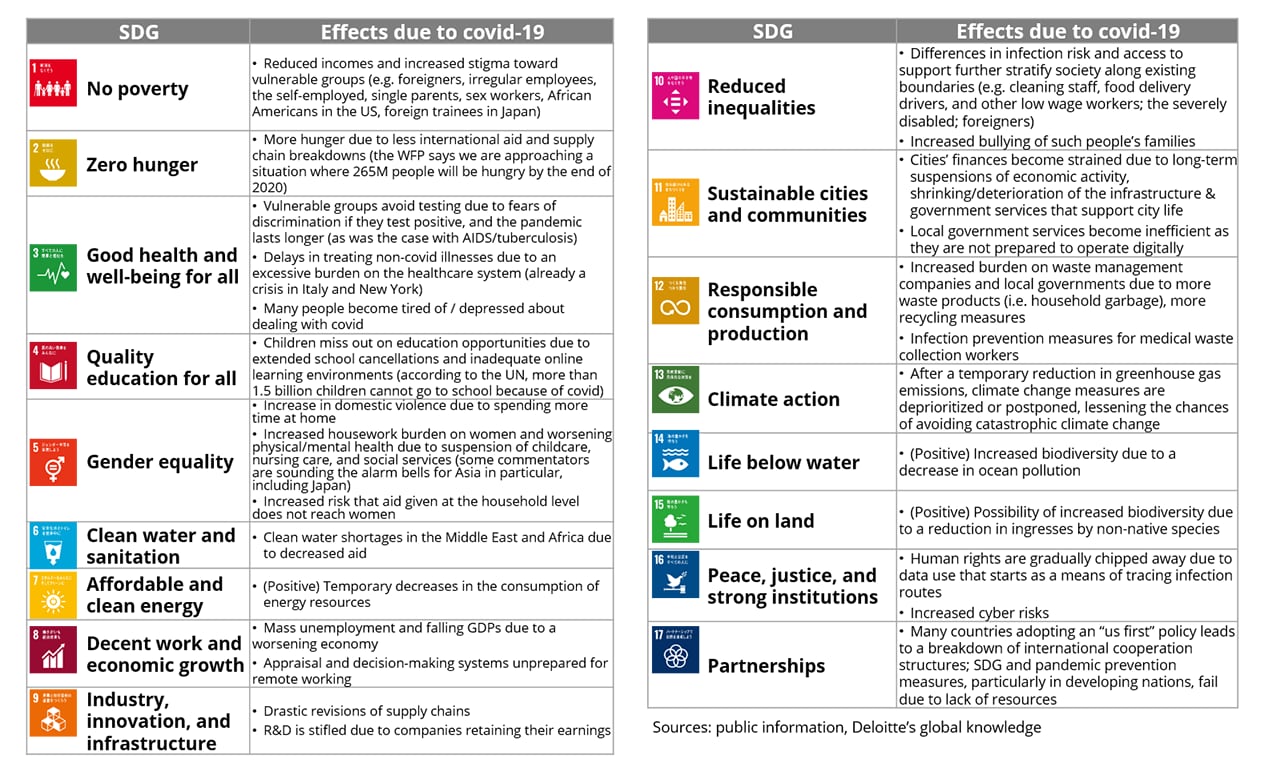 The main finding is that there will be negative effects in nearly all of the goal areas. This is particularly true for the “S”-related goals. As stated above, inequalities that existed before the Covid crisis based on income, gender, disability, race/ethnicity, and employment status have become more apparent in the form of more dire outcomes, i.e. differences in infection rates, death rates, access to preventative measures (e.g. social distancing capabilities), access to healthcare, and access to economic support. Conversely, the indicators for “E”-related goals are temporarily improving due to suspended economic activity. However, since this is no result of proactive efforts to move our economic models away from reliance on fossil fuels and the linear economy based on massive resource consumption, the indicators will most likely bounce back to deterioration once the economy is operational.

With this global outlook, companies will need to strengthen their “sensing” function on changing demands from stakeholders such as the civil society, especially regarding “social” and “governance”-related items, which have to date not been sufficiently prioritized by businesses. They will also need to be on the lookout for the earliest signs of rule formation in capital markets and from regulatory authorities.

In addition, business leaders will find the “zoom-out / zoom–in” approach (figure 4) helpful both in moving away from the “mid-term planning” mindsets that try to predict the future by extrapolating the known pasts, and in making short-term investment decisions on digital transformations while having a confident sense of long-term direction of where the market is heading over the coming 10 and 20 years.

It is undeniable that Covid-19 brings with it many uncertainties. However, one thing seems already certain – the Future of Management in the Era of the SDGs has become a necessity sooner than originally exptected.

Figure 3: A zoom out / zoom in approach 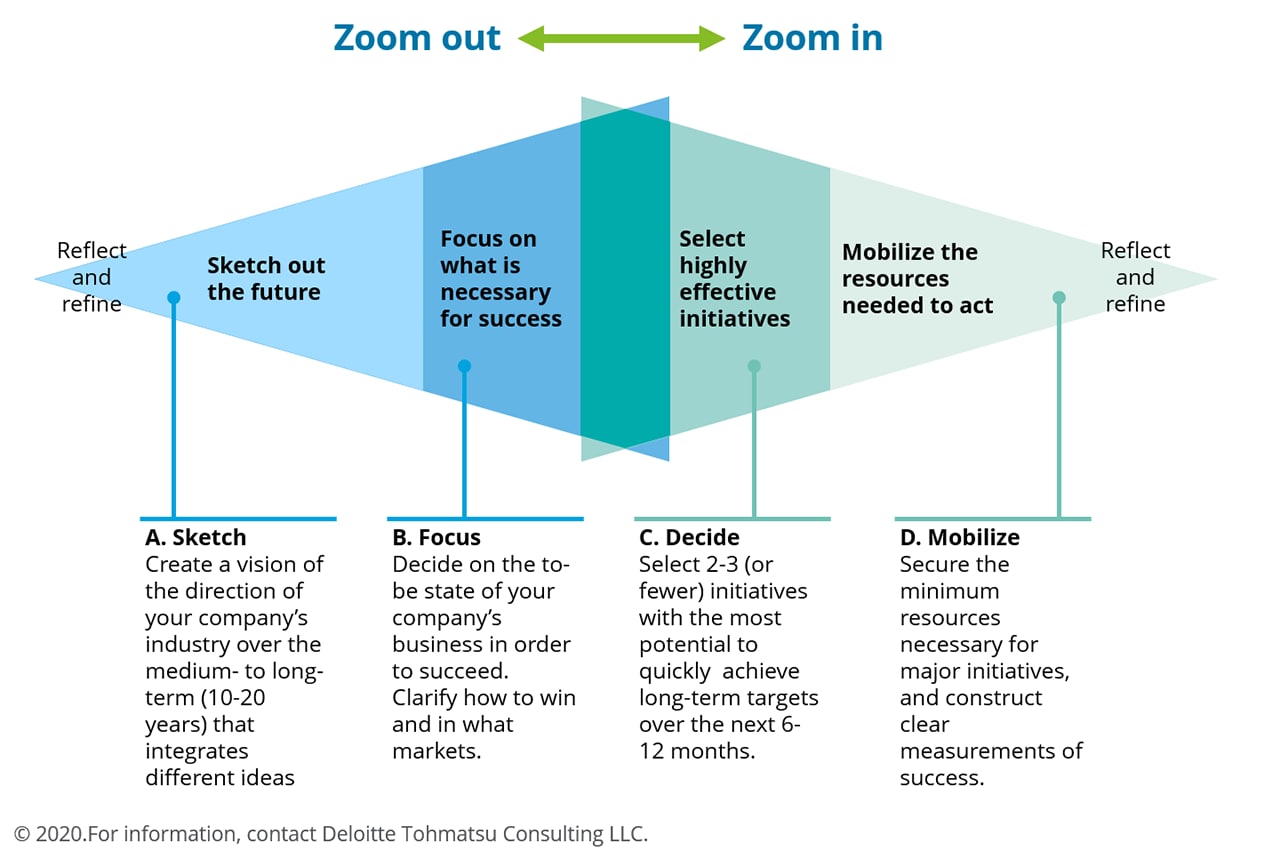 The Marriage of Innovation and Leadership: Amazon Presents Innovation Services, Business and Culture