Rising corporate debt: Should we worry? Issues by the Numbers, April 2019

The dollar value of US corporate debt is on the rise—but are corporations borrowing too much, or is it just a sign of economic expansion? A look at what happened in previous economic cycles offers clues for how to interpret corporations’ borrowing behavior.

Back in 2005–2006, if anyone had examined the path of mortgage debt in the United States—bloated with subprime mortgages and “alt-as”—maybe, just maybe, it would have given a whiff of the unpleasant things about to happen. Thankfully, although battered and very bruised, the US economy managed to find its way through the Great Recession thanks largely to a host of policy supports, including some “creative” central banking.1 Now, with the current economic recovery extending to nearly 11 years—the second-longest expansion on record2—it’s natural for nervous observers to be alert for signals that might presage the next recession. So it’s rather unnerving to find the word “debt” crawling back into the discussion of late.3 This time, it’s not households people are talking about, but corporations.4

Bring on the debt! 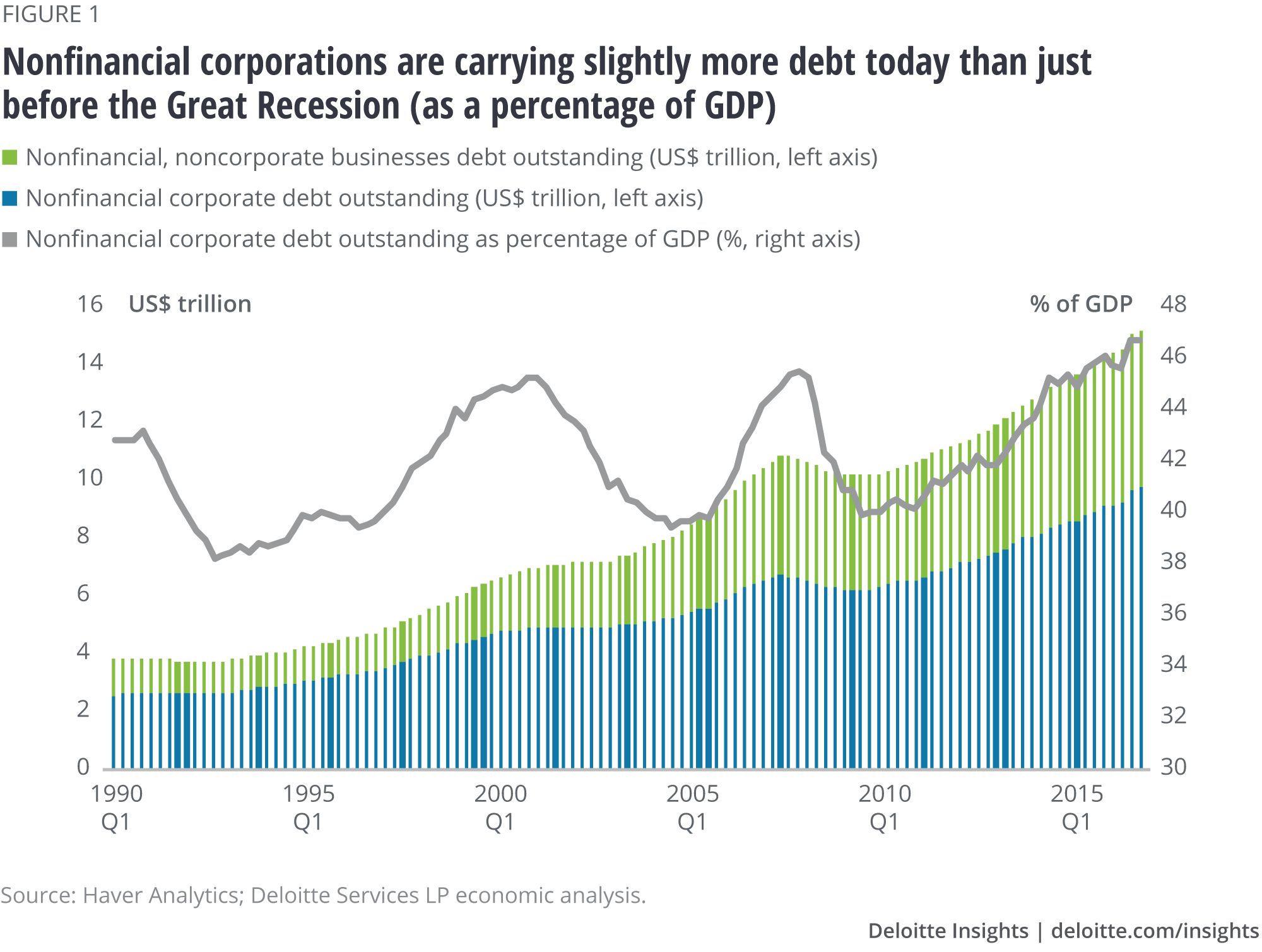 In itself, the rise in corporate debt since 2010 is not surprising or even necessarily worrisome, given that businesses aim to expand operations as demand picks up during an economic recovery. An additional factor that has aided the surge in debt this time around, however—in contrast to previous economic recoveries—is the slew of unorthodox (but successful) monetary policies that the Federal Reserve (Fed) adopted to pull the economy out of the last recession. One of the most notable of these, known as “quantitative easing” or QE, took effect in three tranches between 2008–2015, and resulted in a US$3.6 trillion balance-sheet expansion.7 This combined with a reduction in the effective federal funds rate to near zero, pushed borrowing costs, including corporate bond yields, down to record lows (figure 2). 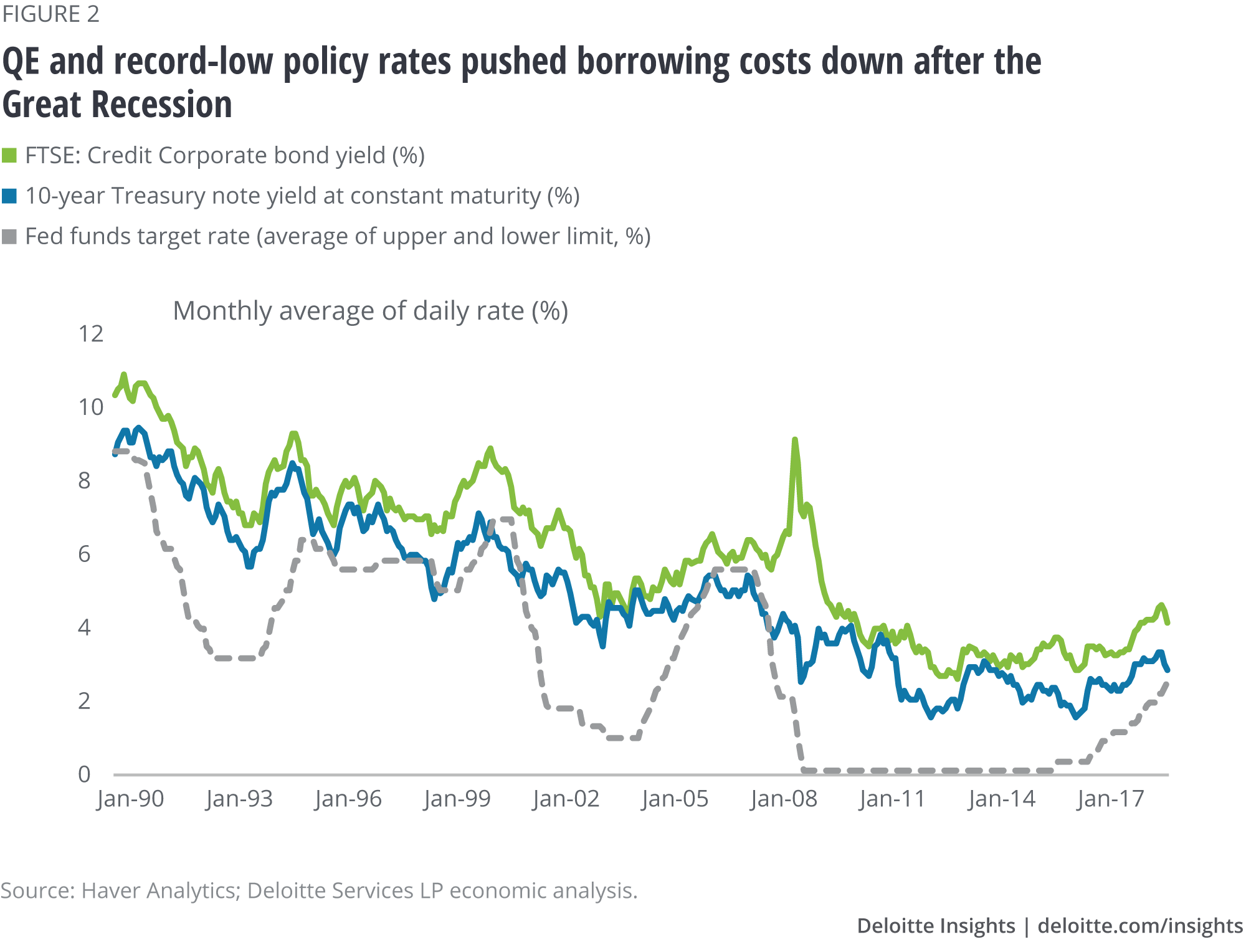 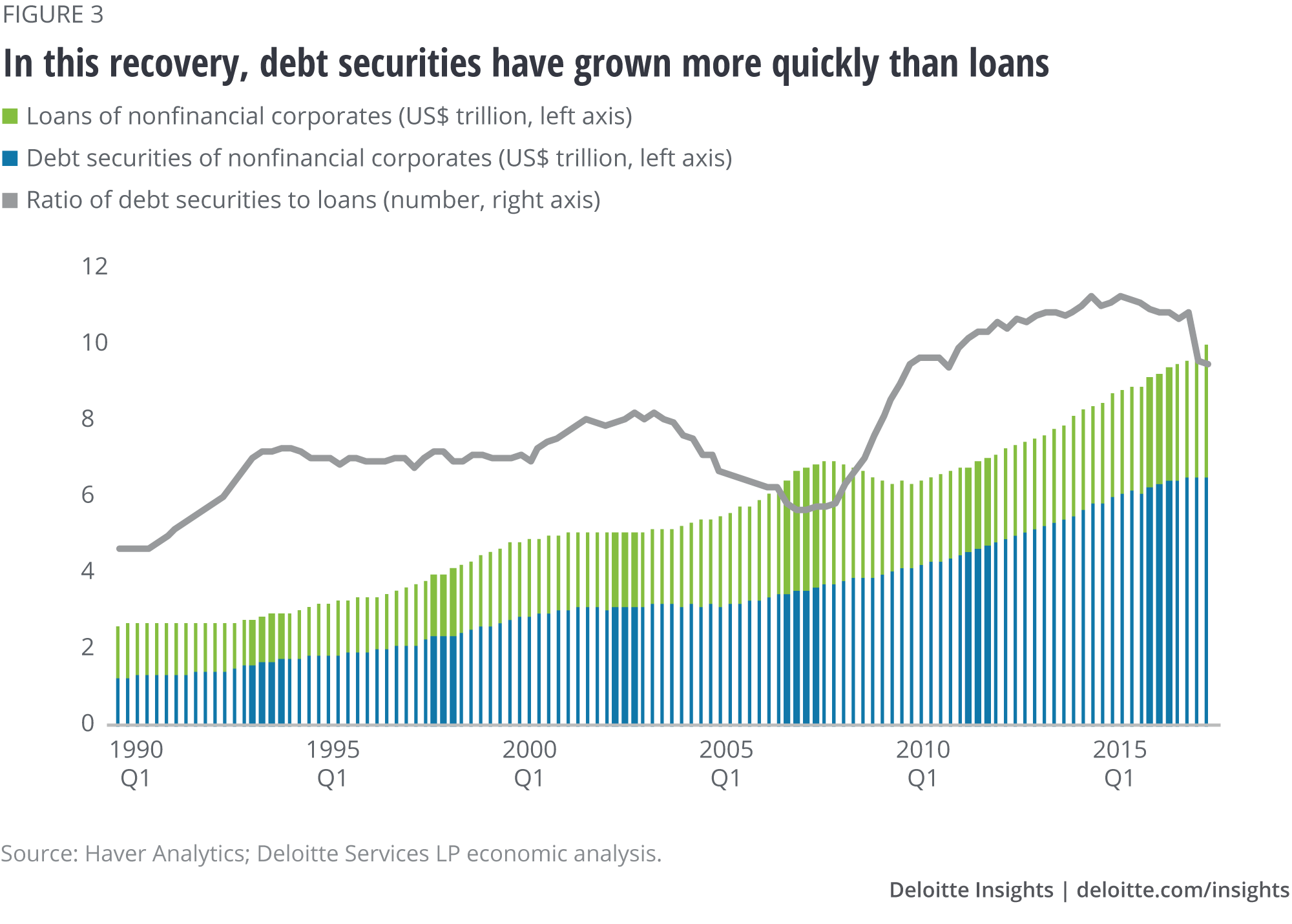 Borrowing up; quality down

While the current surge in corporate debt may look exceptional, is it really any different from what has happened in previous economic recoveries? We take a closer look at the numbers to find out. 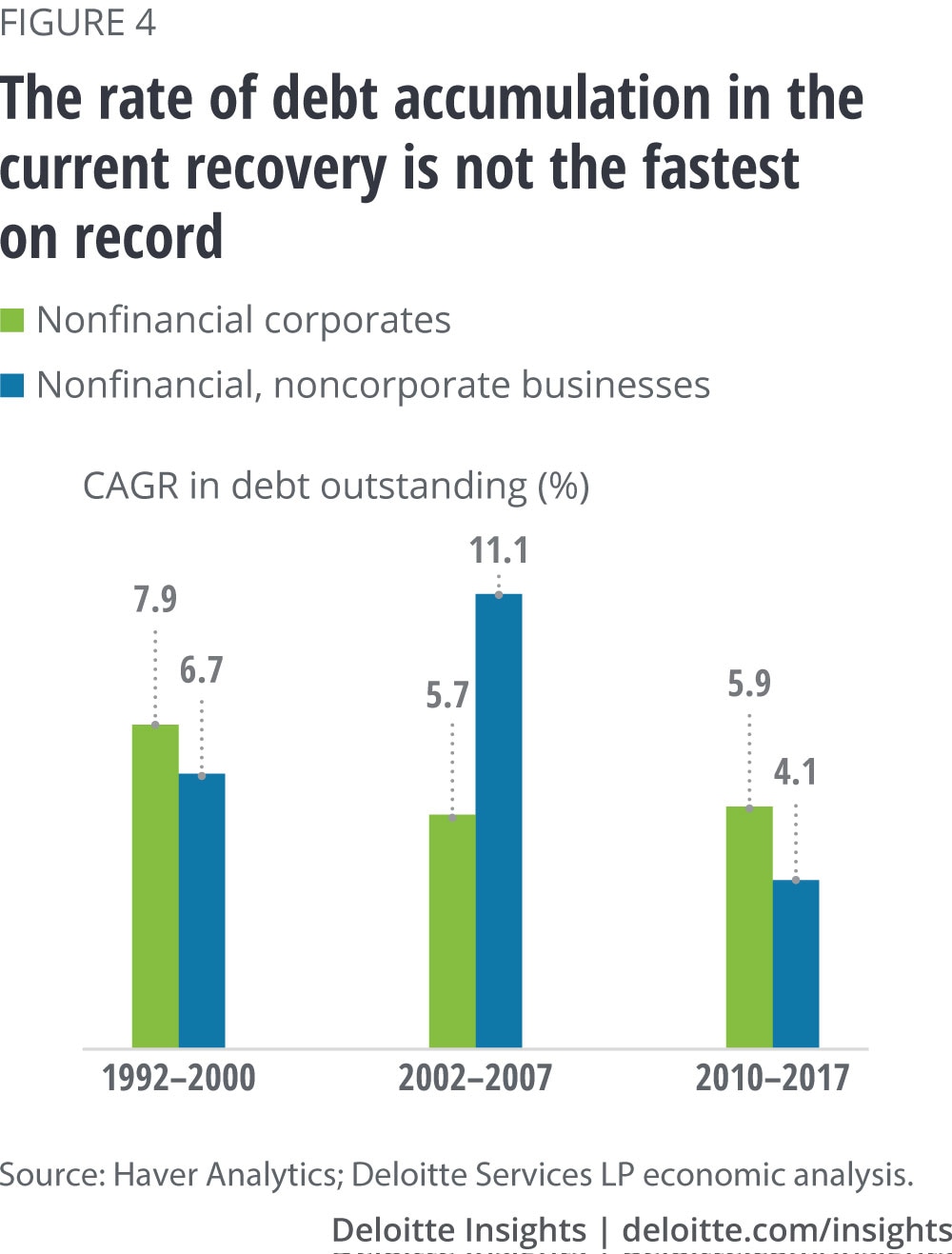 So what does the data across recoveries tell us? During 2010–2017, outstanding debt among nonfinancial corporations posted a compound annual growth rate (CAGR) of 5.9 percent, slightly higher than that during the recovery of 2002–2007 (5.7 percent), but much lower than the rate of debt accumulation of 1992–2000 (7.9 percent). And this is despite greater deleveraging by corporations during the Great Recession: The 6.2 percent decline in debt outstanding during 2008–2009 for nonfinancial corporates was far more than the 2.3 percent fall in 1990–1991 and a nearly flat figure in 2001–2002. For nonfinancial noncorporate businesses, too, the pace of growth in debt outstanding in the latest recovery is lower than that in the two previous ones (figure 4).

It’s worth noting here that checking debt-to-equity trends to confirm rising leverage may not be fruitful, given that the rate of rise in equity valuations often outstrips the rate of leverage during periods of economic expansion. In 2010–2017, for example, the debt-to-equity ratio for nonfinancial corporations fell by 12.4 percentage points despite the rise in leverage. The reason is that, during this period, total equity market value (the denominator in the debt-to-equity ratio) went up by a CAGR of 10.3 percent, much faster than the 5.9 percent corresponding CAGR in debt outstanding. But what about the quality of the debt amassed by nonfinancial businesses this time around? Here, the news is not good. Standard & Poor’s (S&P) and Moody’s ratings data shows that the quality of debt issued during the current expansion is lower than in both prior recoveries.9 During the 1992–2000 recovery, an average of 91.2 percent of S&P-rated corporate bonds sold had an investment-grade rating.10 In the next recovery (2002–2007), this share fell marginally to 90.4 percent. During the current recovery (2010–2018), however, the share of investment-grade bonds has fallen to 78.4 percent. The same trend holds true for corporate bond sales with a Moody’s rating (figure 5). Furthermore, the percentage of corporate bonds sold with the lowest investment-grade rating (below which the rating is junk), for both S&P- and Moody’s-rated bonds, has been higher during this recovery compared to the two previous ones. This shows that, even among the investment-grade bonds sold during the current recovery, the share of bonds that are most susceptible to a credit downgrade to junk has gone up.

The biggest 1,000 companies: Can they pay it back?

In addition to the lower quality of debt amassed during the current recovery, are there factors indicating a lesser ability to pay among corporate borrowers?

Between 2010 and 2017,14 these 1,000 companies accumulated debt at a CAGR of 9.5 percent. Although this figure is higher than that in the 2002–2007 recovery (7.1 percent), it is still lower than that of the 1992–2000 recovery (12.4 percent). The pattern is similar when looking at long-term debt instead of total debt, which includes short-term borrowing requirements. Hence, the pace of borrowing growth in the current recovery does not stand out compared to previous ones. 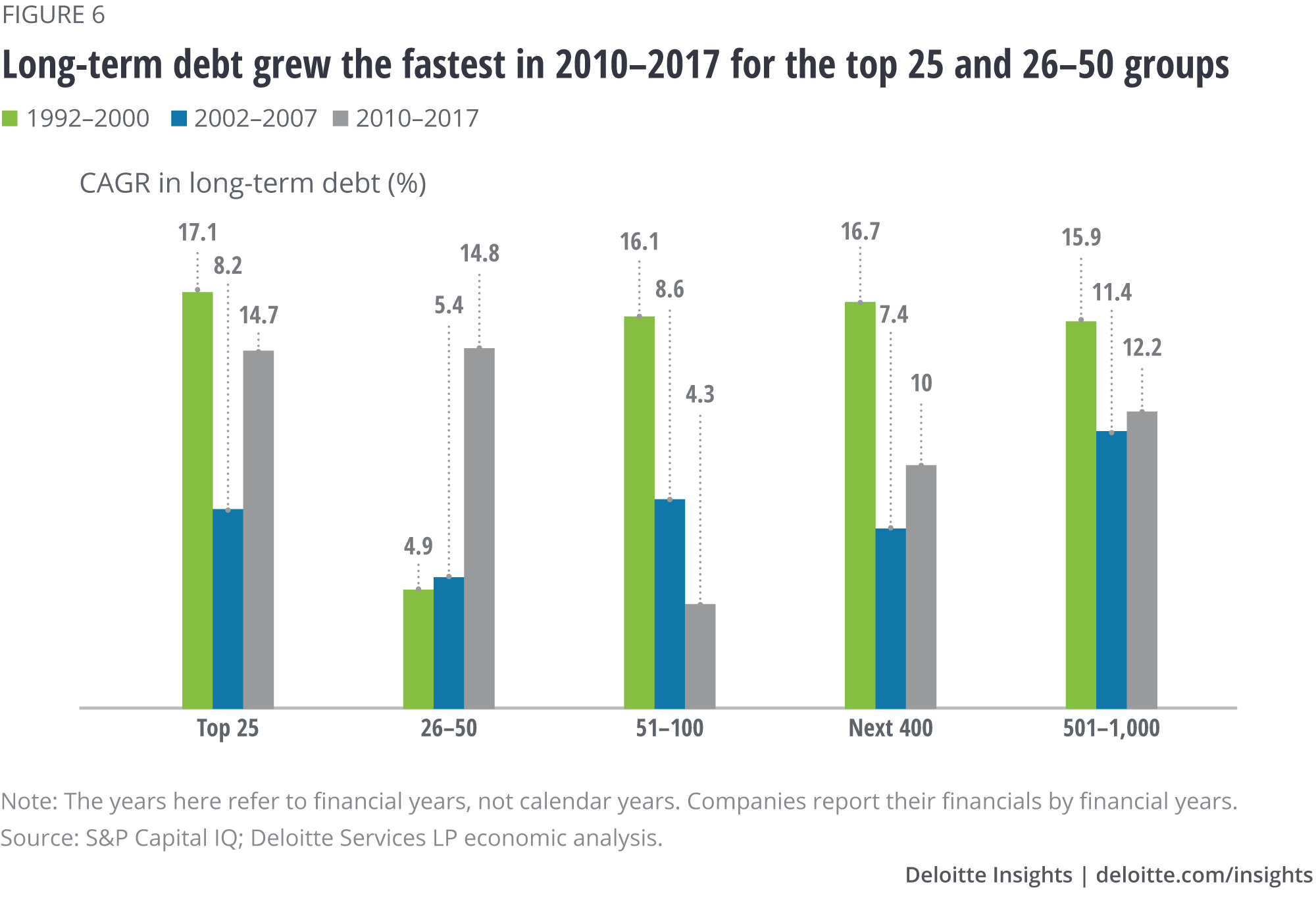 While rising debt may not be a bad thing—after all, borrowing and investments are part of a healthy market economy—what matters is the borrowers’ ability to repay the debt. Here, the news is not comforting. The ratio of net debt to earnings before interest, tax, depreciation, and amortization (EBITDA)—an indication of net debt accumulation relative to earnings—has gone up during the current recovery for the 1,000 companies, taken together, by 0.5 percentage points. In contrast, during the 1992–2000 and 2002–2007 recoveries, the net-debt-to-EBITDA ratio fell. The current trend in this ratio may therefore be something to keep a cautious eye on.

If we look at the five groups, we find that the ratio of net debt to EBITDA has increased the most for the 101–500 group (figure 7) during the current recovery, followed by the 501–1000 group. And given that the ratio itself as of 2017 for these two groups is much higher than (say) the top 25 and 26–50 groups, they should not only worry more about the rise in net debt relative to earnings in recent times, but also about the level of the ratio itself (figure 8). 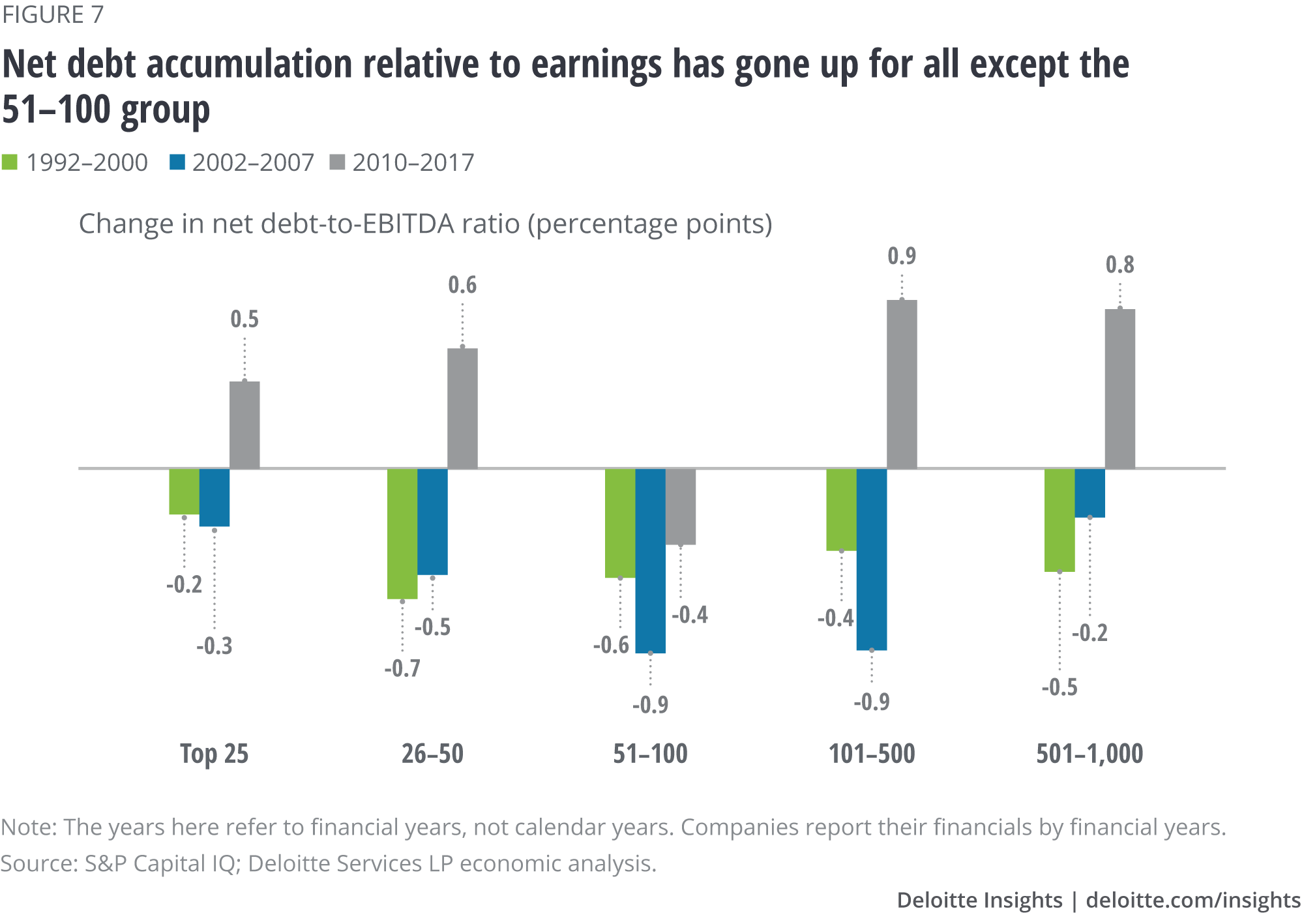 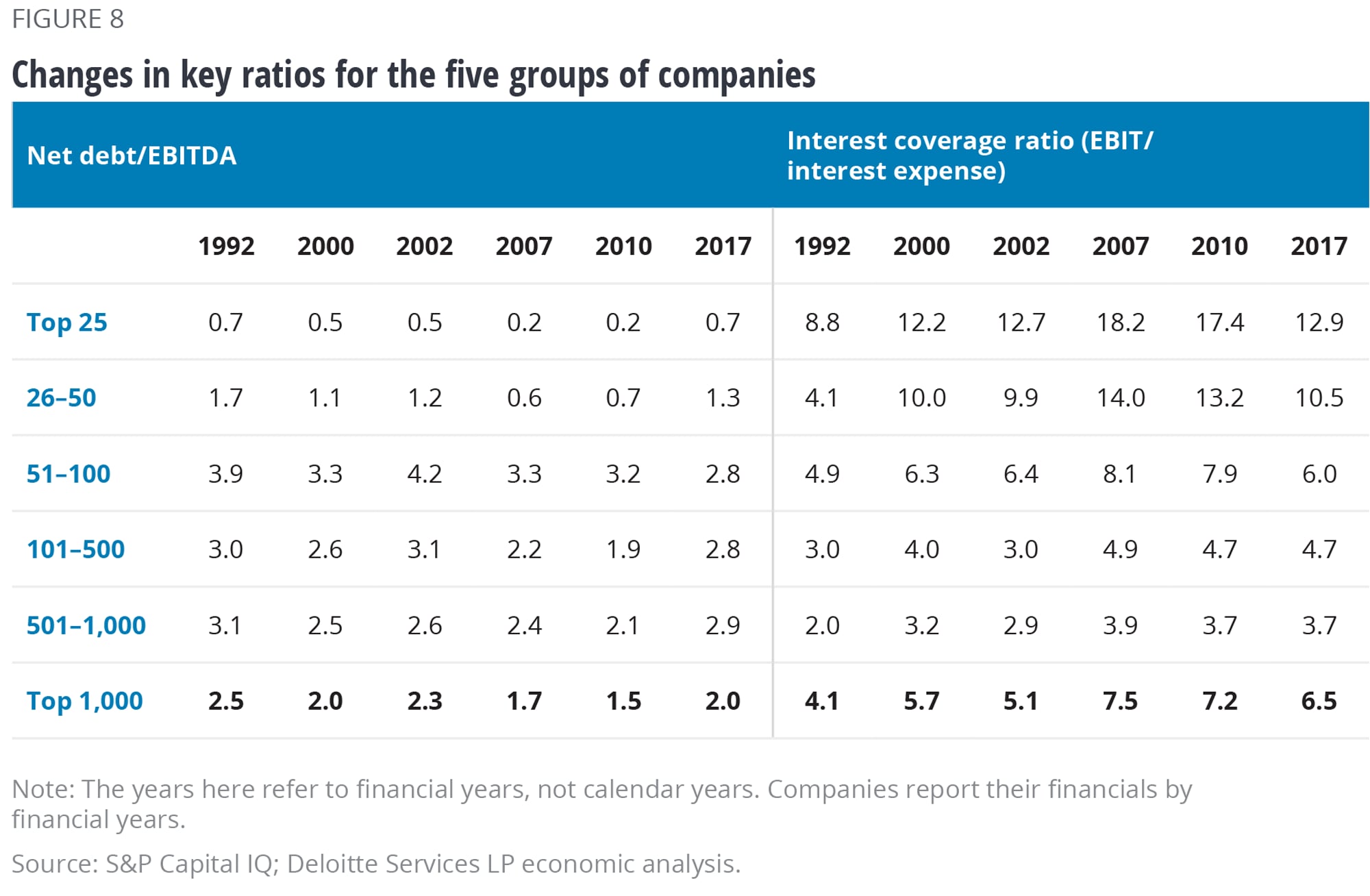 Another point of worry is that the interest coverage ratio15—which gauges a firm’s ability to pay back debt—has declined for the 1,000 companies, taken together, during the current recovery. This contrasts with the rise in the interest coverage ratio these companies experienced during the previous two recoveries. The top 25 and the 26–50 groups continue to have higher interest coverage ratios than the others (figure 8), but their ratios suffered the biggest declines in 2012–2017 (figure 9). Given that these two groups have witnessed the fastest growth in long-term debt during this period, a continued surge in debt without earnings keeping pace could mean further deterioration in their ability to pay debt back—something that may not augur well for them if the economy stutters. 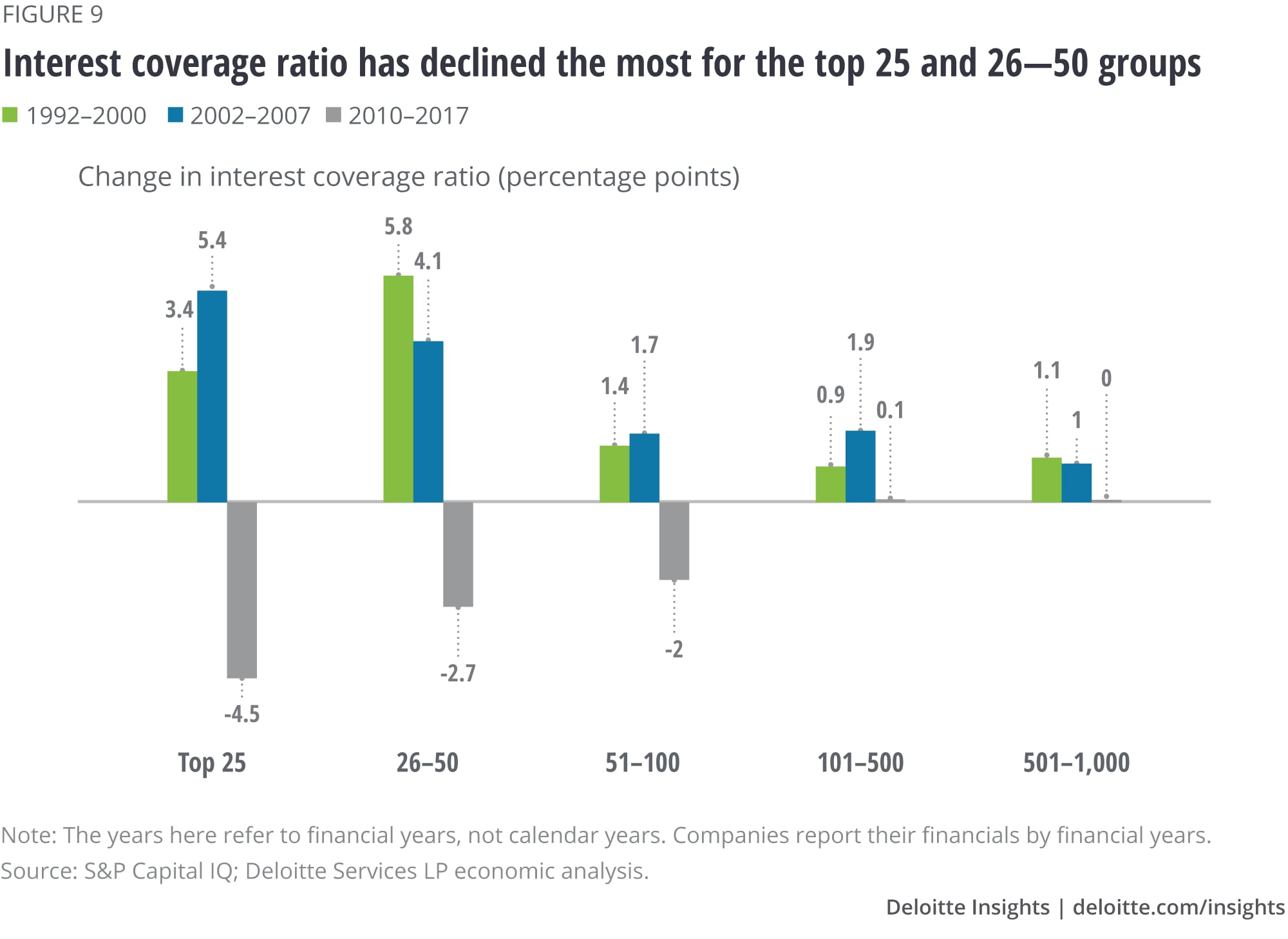 The implication is clear. Although corporate debt levels went up in all three of the latest economic recoveries, corporations’ ability to repay debt, unlike in the previous two recoveries, has likely declined in the current recovery.

Keep your eye on IT, communications services, and energy

When we break this group of 1,000 companies into its component sectors, a key trend stands out: The industrials sector’s share of total debt among these companies decreased sharply between 2010 and 2017. In 2010, industrial corporations represented 21.5 percent of the total long-term debt of the top 1,000 companies taken together; by 2017, that figure had fallen to 11.9 percent. The share of total long-term debt held by the utilities sector has also decreased, albeit less drastically than that of industrials.

While industrials’ and utilities’ share of long-term debt decreased over 2010–2017, the share of debt held by the information technology (IT) sector went up from 6.5 percent to 13.6 percent during the same period, perhaps reflecting the growing role technology has played in the economy. The IT sector’s long-term debt grew at a CAGR of 22.6 percent between 2010 and 2017, far outpacing this sector’s increase in long-term debt in previous recoveries. The only other sector that has accumulated long-term debt faster in the current recovery than in the previous two recoveries is energy (figure 10). This is likely linked to the rise in investments in shale and the emergence of the United States as the world’s largest oil producer.16

The communications services sector—another big player in the digital and technology economy—has also witnessed a rise in its share of long-term debt (from 10.5 to 13.3 percent) from 2010 to 2017, as a percentage of the total debt carried by the 1,000 biggest companies. Interestingly, IT and communications services represented the largest share of the top-25 group’s long-term debt in 2017: Together, these sectors accounted for 66.5 percent of the US$ 933 billion in long-term debt held by these 25 companies that year. 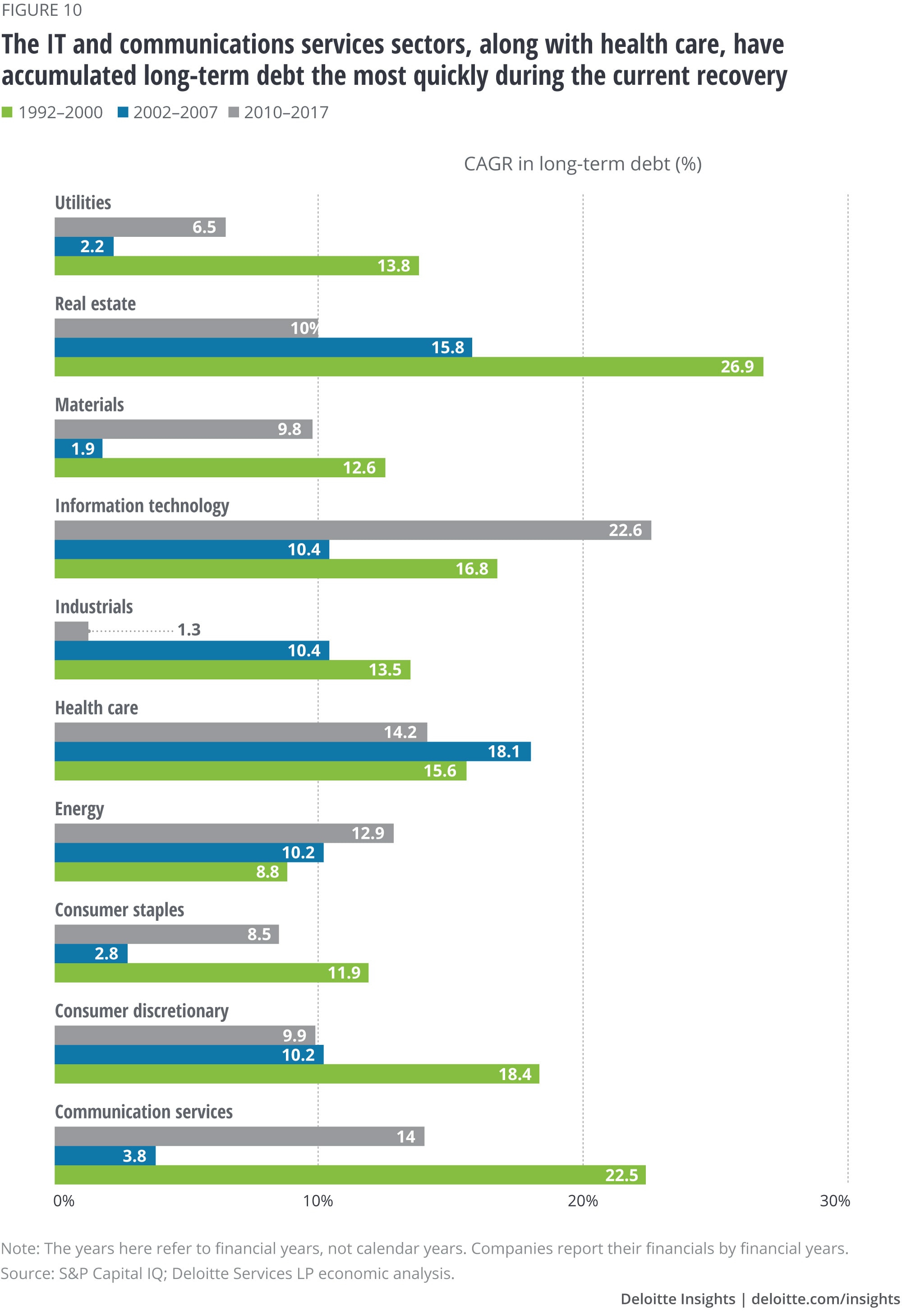 What about the ability to pay back debt? Are sectors that are seeing a rise in long-term debt also experiencing a decline in their ability to pay it back? A quick look at the net debt-to-EBITDA ratio shows that it has gone up for all sectors except industrials and real estate (figure 11), indicating a decrease in their ability to repay debt. The energy sector, where this ratio has gone up by 1.8 percentage points between 2010 and 2017—contrasting with declines in the previous two recoveries—is the most striking in this regard. The energy sector’s interest coverage ratio has also decreased sharply over the current recovery, whereas in previous recoveries, its interest coverage ratio increased (figure 12). A similar trend is evident for the IT sector, though not as pronounced. 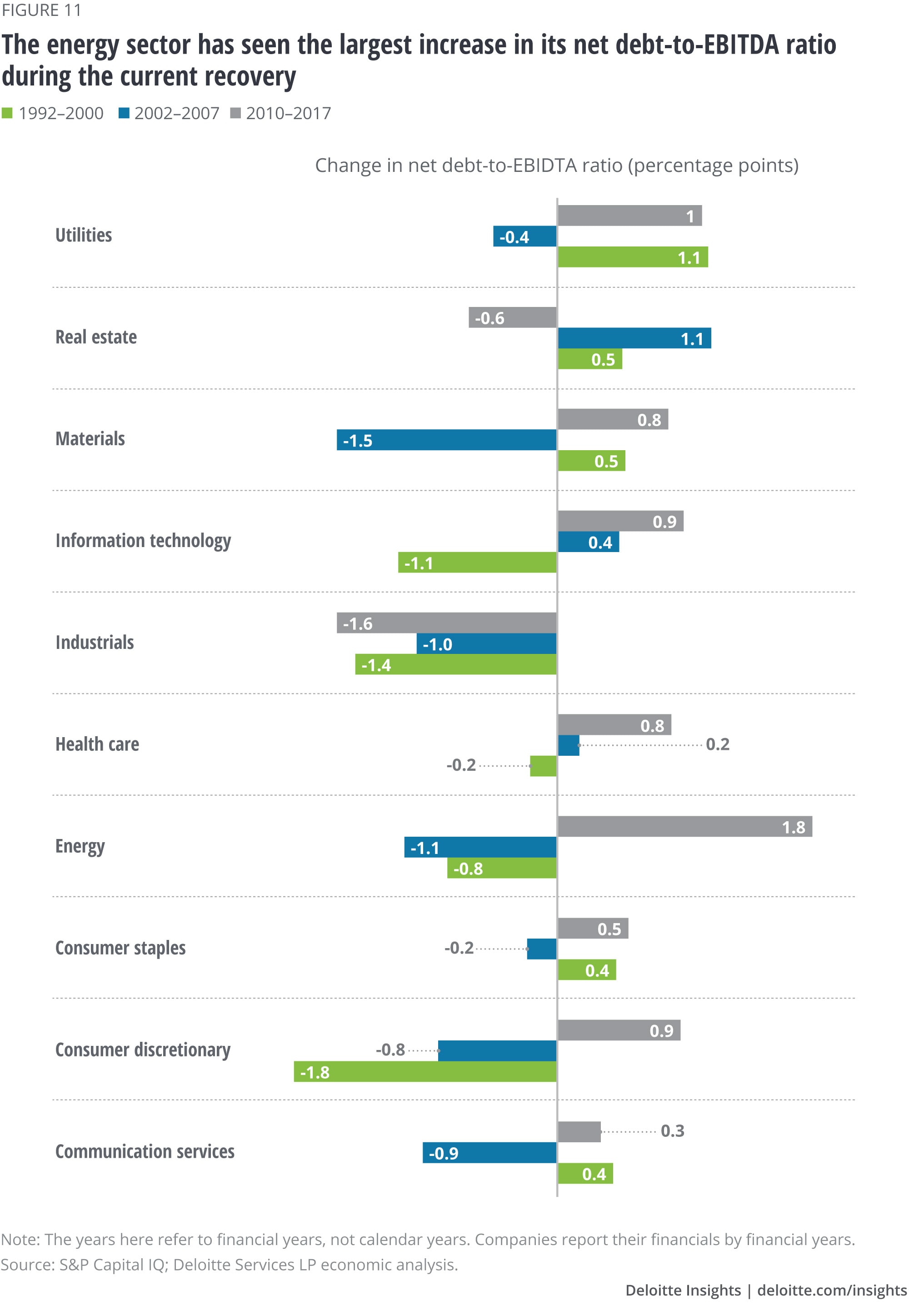 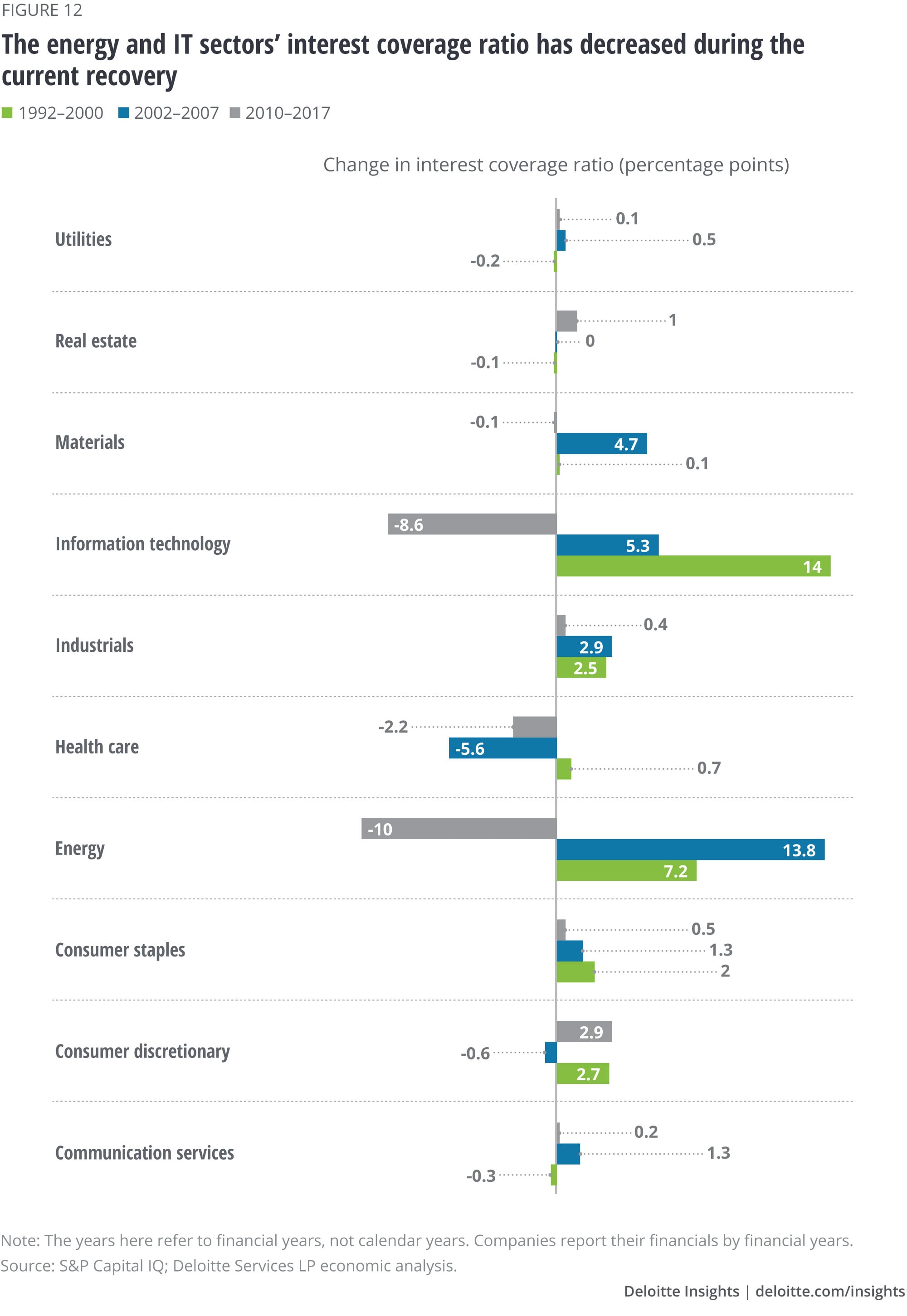 Of size, ratios, and intent

Growth in corporate leverage is not unique to this economic recovery; it happened in previous recoveries as well. The current rise in leverage, however, is different in some respects from the recoveries of 1992–2000 and 2002–2007.

First, although the debt growth rate during this recovery has not been the fastest among the three recoveries since 1991, the sheer volume of debt accumulated is notable. Between 2010 and 2017, US nonfinancial corporations increased their leverage by almost US$3 trillion, much more than in the previous two recoveries (US$2.1 trillion in 1992–2000 and US$1.5 trillion in 2002–2007). And this time, debt quality isn’t as good as in the last two recoveries.

Second, the current recovery’s rise in debt has been accompanied by deterioration in a few key financial ratios. In particular, among the top 1,000 US nonfinancial companies by market value (in January 2019), the net debt-to-EBITDA ratio and their interest coverage ratio—both of which are indicators of the ability to pay debt back—have both deteriorated during the current recovery. During the previous two recoveries, in contrast, these ratios improved for the same group of 1,000 companies.

Third, IT and communications services are leading the debt binge. In part, this reflects their growing importance in the US economy. Along with their higher leverage, however, these sectors are experiencing greater deterioration in the key financial ratios mentioned above. The energy sector, especially, stands out for its rising leverage and deteriorating net debt-to-EBITDA and interest coverage ratios. In a sector whose performance depends on volatile prices, this is something to think about.

All may still be well if the economic recovery continues and companies reap growing returns from the investments they have made during this recovery. That, however, brings us to the question of what companies have been doing with their borrowed money. Have they invested in efforts to grow and improve their operations? Or has the borrowed money been spent on share buybacks and dividends? While short-term concerns about debt may wither if the economic outlook improves quickly and interest rates remain in check, a lack of prudence in using borrowed funds may not augur well for businesses in the medium to long term. Unless they choose wisely, they may lose out on an opportunity to boost productivity through increased investment, which is important not only to individual companies but to the US economy overall.

Explore Issues by the Numbers

Rising corporate debt: Should we worry? has been saved

Rising corporate debt: Should we worry? has been removed