Labor shortages, talent recruiting and retention, burnout, morale, potential delays in return-to-work, and rising wages are the internal risks CFOs cited most frequently in this quarter’s survey. Of course, other challenges are adding to their stress, including the pressure to grow their organizations and to deliver products and services in a timely manner amid supply chain disruptions.

Those challenges, and CFO perspectives on the economy, are highlighted in the 3Q 2021 CFO Signals™ survey report. Highlights this quarter include:

Here's how survey respondets answerd other specific quistions this quarter:

Assessments of the business environment and capital markets 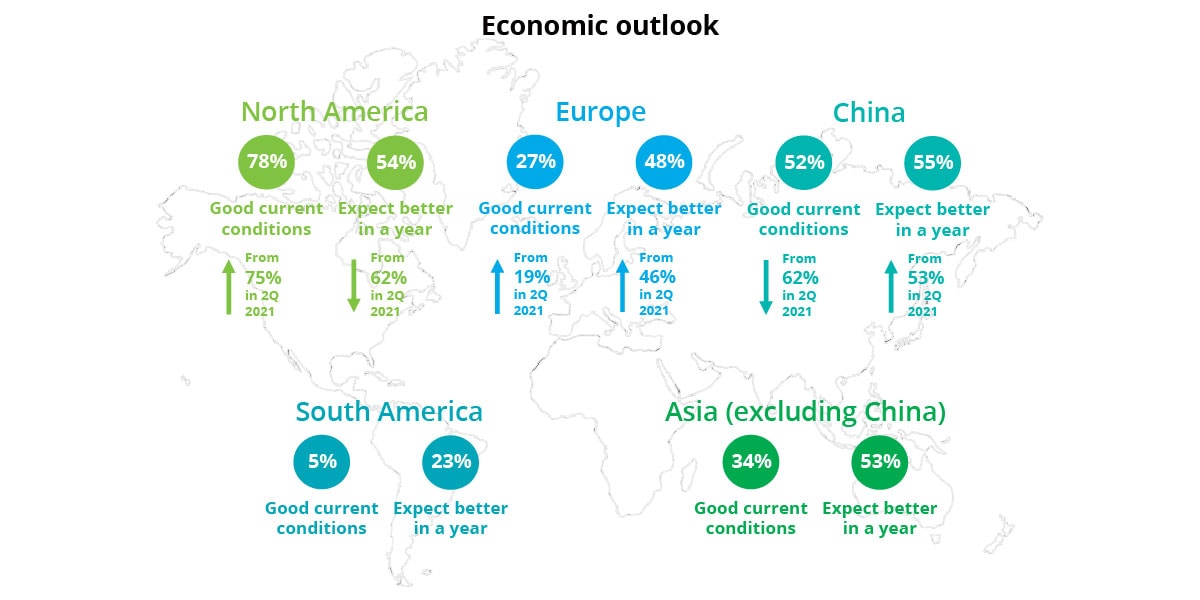 How do you regard the current and future status of the following economies—North America, Europe, China, Asia (other than China), and South America? When assessing the current status of the five regional economies,78% of CFOs ranked North America as good or very good, up from 75% in 2Q21. More than half (52%) said the same for China, a decline from 62% in the previous quarter. CFOs raised their sentiment toward Europe’s economy, with 27% citing it as good or very good, an increase from 19% in 2Q21. For the first time in the survey’s history, we asked CFOs to assess the economy of Asia, excluding China, and about one-third of CFOs (34%) consider it to be good or very good. We also asked CFOs to assess South America’s economy, again for the first time, with 5% viewing it as good or very good.

How do you expect your key operating metrics to change over the next 12 months? CFOs lowered their expectations for year-over-year growth for revenue, earnings, capital spending, and dividends, compared to the prior quarter. Meanwhile, they raised their YOY growth expectations for domestic hiring and domestic wages and salaries: 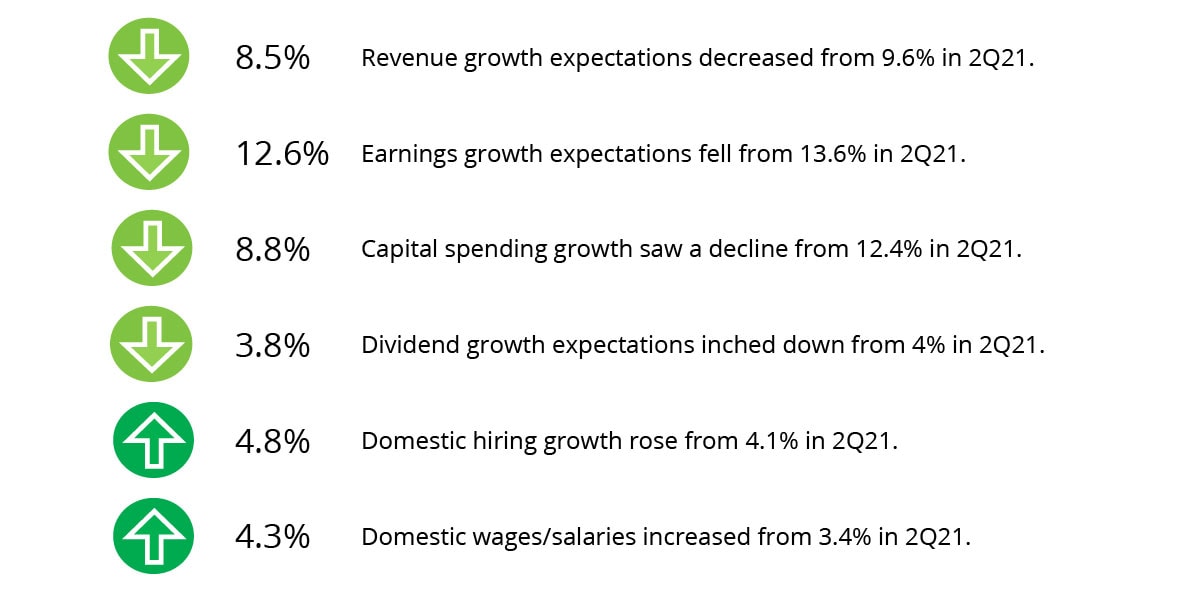 Compared to three months ago, how do you feel about your company’s financial prospects? The optimism index declined to +59 from last quarter’s +70 as a smaller percentage of CFOs (66%) expressed rising optimism, compared to 75% in 2Q21. CFOs in the Retail/Wholesale (89%) and Technology (86%) industries were the most positive. No one expressed significantly less optimism; however, some CFOs were somewhat less optimistic, specifically those in Telecom/Media/ Entertainment (T/M/E) (33%), Energy/Resources (25%), Services (15%), Retail/Wholesale (11%), Financial Services (5%), and Manufacturing (3%).

What internal risk worries you the most? Once again, talent from various perspectives—retention, morale, burnout, return-to-work challenges, and others—ranked highest among CFOs’ internal risk worries. CFOs also cited rising costs and wage inflation, among other concerns.

What external risk worries you the most? By far, CFOs cited COVID-19, along with its variants, resurgence, and impact on return-to-work on-site and normal operations most frequently. Inflation, changes in regulations, supply chain challenges, and cybersecurity were also high on their list of external worries. 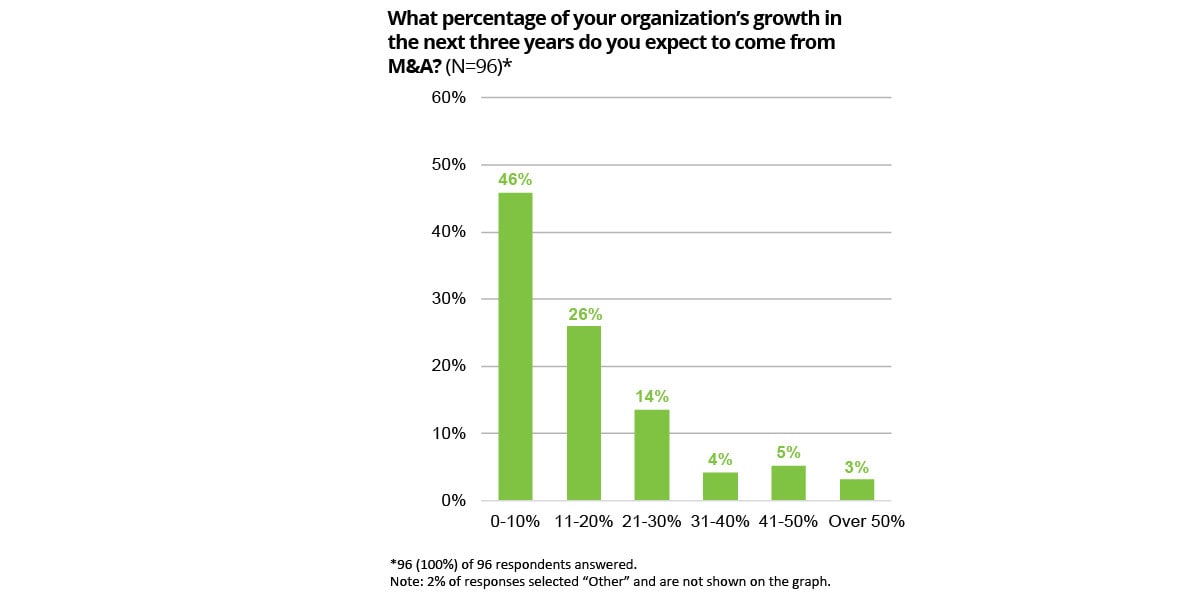 Which most accurately describes your finance support model for M&A? More than half of CFOs (58%) noted they use a subset of finance team members who are named, trained, and prepped for acquisitions to support their organizations’ M&A activities; 36% have a dedicated M&A finance function; and 34% identify part-time leaders for their companies’ M&A deals. Some 46% of CFOs access on-call advisors or M&A as a service, and 30% use standard M&A templates and playbooks.

What are your organization’s areas of focus with respect to potential M&A transactions? More than half (52%) of CFOs indicated selectively considering acquisitions only if price and fit are favorable as their top area of focus when considering possible M&A deals, while 49% noted seeking inorganic growth and 46% indicated maintaining competitive positioning as their top focus. For 41% of CFOs, taking advantage of disruptive opportunities to secure their future positioning was their top choice, followed by divesting of non-core assets/underperforming units, mentioned by 32% of CFOs; 28% are considering alternatives to M&A, including alliances and joint ventures. 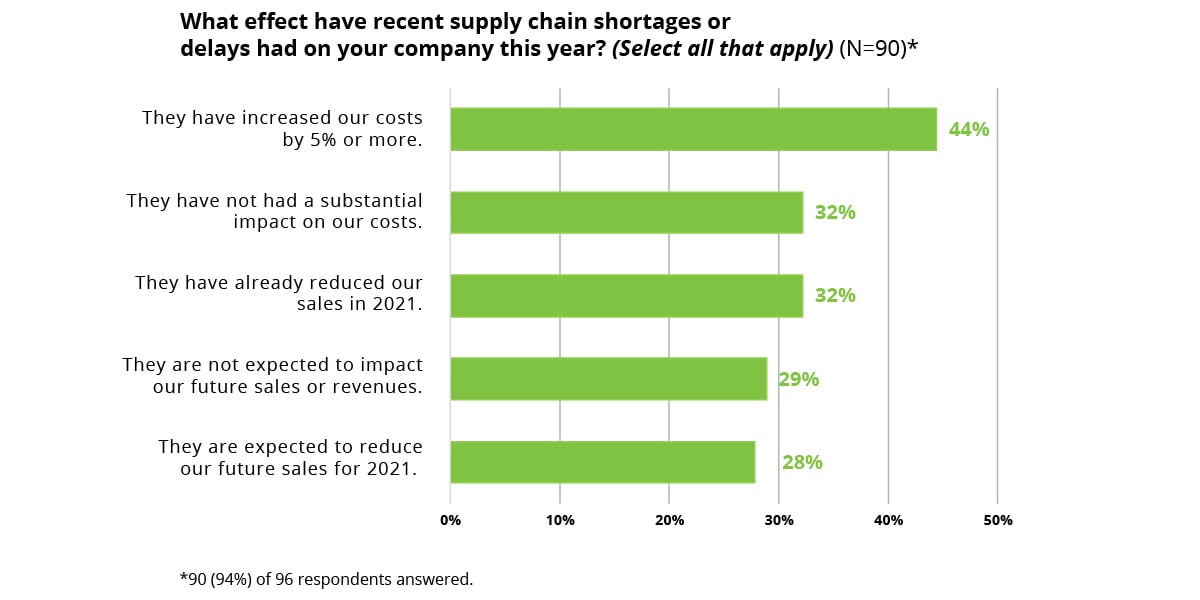 Approximately what percentage of revenue does your company currently derive from the following regions? The concentration of companies’ revenue by region also shows North America as the dominant source, although the percentage of companies’ revenue sources varied from company to company and industry. Manufacturing and Technology companies derived a higher percentage of revenue (24% each) from Europe than other industries. Again, the results most likely reflect the North American base of respondents.

Which supply chain risks concern you the most? CFOs cited cyber risk (69% of CFOs), operational risk (60%), and geopolitical risk (56%) as their top three risk concerns when it comes to their supply chains. To a much lesser extent, they indicated environmental risk (19% of CFOs), financial risk (15%), and legal risk (9%).