3 trends powering rapid growth in government analytics has been saved

3 trends powering rapid growth in government analytics has been removed

​Three key trends in advanced analytics are powering the government’s ability to measure its own performance and adjust resources to meet goals.

It all started with an eyebrow-raising announcement

The audience for the White House Open Data Summit, held in September 2016 at the Washington Convention Center, saw a number of fascinating presentations.

But one presentation really raised eyebrows: A senior official from the Commerce Department, while announcing a new open-source tool, took the unusual step of calling out by name the project’s lead programmer, Andrea Julca.

The Commerce Department’s announcement made for quite a change from the old days of government software development, with its hierarchies of expert but nameless programmers making anonymous contributions to systems which often took years to complete. Julca and her colleagues needed only three months of coding in the R statistical programming language to create the first version of the bea.R tool.

And get this—Julca tells us she had minimal prior experience programming in R before she began working on bea.R, and undertook her project with only limited resources prior to beta testing.

This is what we call mission analytics: Use of advanced analytics on government operational data. These trends are powering rapid growth in the government’s ability to measure its own performance against its stated mission and to adjust its resources to better meet goals.

Trend one: A skilled workforce that can constantly acquire new skills

Like Julca, many other officials from all levels of government are becoming more proficient in skills that facilitate the adoption of data-driven approaches to delivering public services.

Julca herself is not a computer scientist. She’s an economist by training and is currently pursuing a degree in human-computer interaction. She considers herself a ‘recreational’ computer programmer.

Like many of the government officials described in the chart above, she taught herself enough programming using online resources to be able to accomplish her goal of creating a toolkit to improve access to BEA’s data.

The innovations and technologies that are transforming government

Julca was able to create the bea.R toolkit in part because of new—primarily open-source—software designed to facilitate the analysis, production, and dissemination of analytics-driven products and services. For a successful software project, you need a community of contributors.

To host the community of contributors to her toolkit project, Julca chose the software collaboration portal GitHub. GitHub is the largest open-source software development platform on the internet according to numbers of projects and users hosted, leading other popular services such as Bitbucket, Cloud Forge, and GitLab. She used GitHub to coordinate contributions made by other programmers to her project.

As with all innovations, adoption of GitHub as a collaboration platform for government projects is not evenly distributed. Some agencies are further ahead and city governments in certain regions show more advancement than in other parts of the US.

Of the nearly 10,000 projects on GitHub uploaded by government agencies, almost three quarters were created by federal agencies and government research laboratories. Among cities using GitHub, four of the top five cities (Philadelphia, Washington, DC, New York City, and Boston)—as measured by the number of projects—are concentrated on the East Coast. 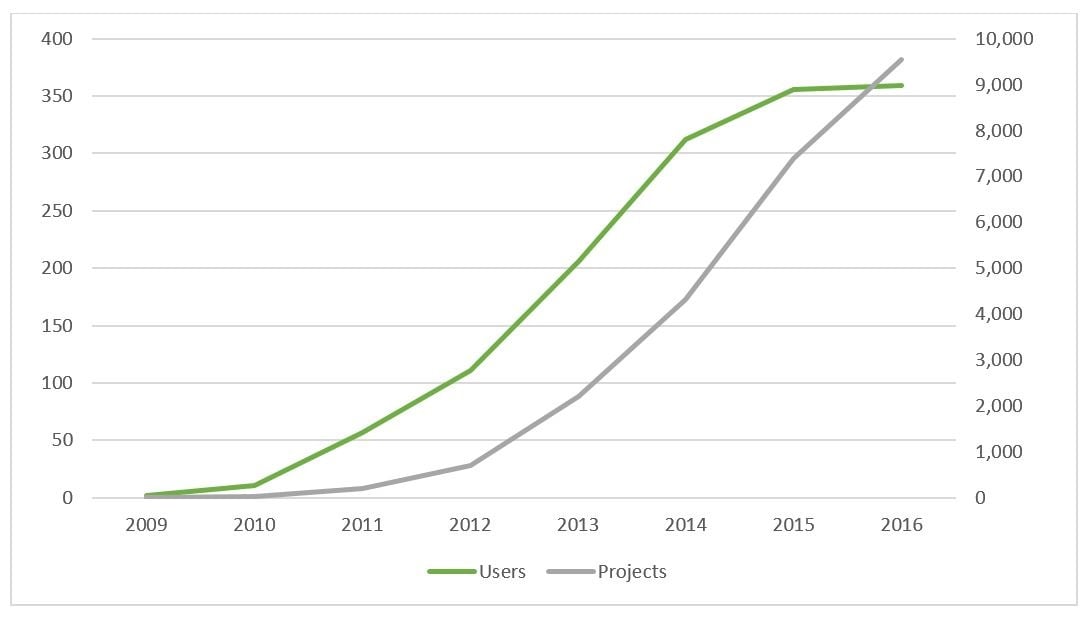 Julca’s toolkit provided easy access to public sector economic data. This brings us to the third trend—the rapid growth and diverse availability of open data. This growth has been powered by policies destined to promote government transparency and facilitate access to open data.

Transparency portals for government information are proliferating at all levels of government, with states like Montana and cities like Chicago leading the way.

If these trends persist, there is a lot of great data in our future

Julca’s toolkit for accessing data from the Bureau of Economic Analysis is here to stay, and having a big impact. It’s already been downloaded several hundred times by users from 27 different countries. By giving easy access to BEA statistics on topics like gross national product, import and exports, and balance of payments, Julca’s innovation makes it easier to connect BEA data with government operational data.

For programs whose mission is primarily economic, it’s becoming easier to measure how effective those programs are. The future looks bright for open data and its role in helping government measure and improve performance.

Insights to action  leaders and managers look again at the challenges and opportunities that come along with the evolution in government.

Peter is a strategic analysis manager and data scientist with the Deloitte Center for Government Insights, where he focuses on developing innovative public sector research using geospatial and natural... More

Jesus is a manager and data scientist working for Research & Insights at Deloitte Services LP. As a data scientist he develops and implements cutting edge research methodologies to provide insights to... More