Do you know your counterparty exposure?

On June 14, 2018, the Federal Reserve Board (FRB) unanimously voted to pass the final rule to establish single-counterparty credit limits (SCCL) for covered large US bank holding companies (BHCs) and foreign banking organizations (FBOs). The final rule, which aims to limit the amount of exposure that large banks can maintain with a single counterparty, is generally aligned with the proposed rule issued in March 2016.

Below are key takeaways from the final rule:

Following the financial downturn, regulators have focused on limiting interconnectedness between large financial institutions, including through limiting credit exposure to a single counterparty. The FRB proposed to apply EPS including SCCL requirements to US BHCs first in December 2011 and FBOs in December 2012. However, the February 2014 EPS final rule deferred of SCCL for future rulemaking for both BHCs and FBOs. The FRB noted that it was participating in the BCBS’s initiative to develop a similar large exposure regime applicable to all global banks, and expressed intent to consider this effort in developing SCCL requirements in the US.

In April 2014, the BCBS finalized its large exposure framework, setting forth a common standard for measuring, aggregating, and controlling single name concentration risks across jurisdictions. This included a general limit of 25 percent of a bank’s Tier 1 capital applied to all of a bank’s exposures to a single counterparty or a group of connected counterparties and a 15 percent limit applied to exposures between banks designated as G-SIBs.

In March 2016, the FRB re-proposed its rule to SCCL for US BHCs, FBOs, and IHCs that was largely in line with the BCBS framework. President Trump signed the bipartisan regulatory relief legislation (S.2155) in May 2018, which raised the statutory asset thresholds related to the imposition of EPS. Two years since the re-proposed rule and a month since the regulatory relief bill was signed, the FRB finalized the SCCL and employed the new thresholds from the relief legislation for the first time.

Implications of the FRB final rule 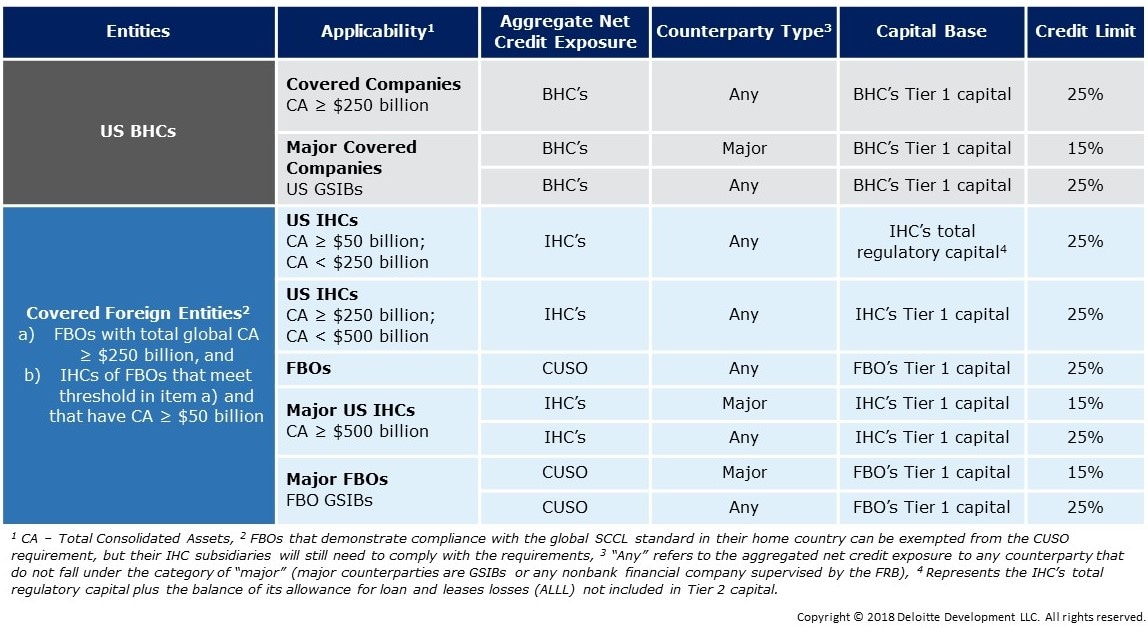 Tailoring of application: Although the final rule is generally aligned to the proposed rule issued in March 2016, the final rule has further narrowed the applicable scope of SCCL to focus on GSIBs and BHCs with at least $250 billion in assets, reflecting the new thresholds from the regulatory relief legislation S.2155. The FRB has indicated their intent to assess the extent to which the Board will apply SCCL and other EPS rules to banking entities with assets between $100 billion and $250 billion. With respect to any US IHCs of FBOs with total assets of $50 billion or more, the basic limit structure remains unchanged from the draft SCCL proposal.

Infrastructure build could be significant: The final rule will require the applicable banking entities to make adjustments to their current exposure calculations methodologies, netting criteria, and reporting capabilities in order to calculate exposure versus limits on a daily basis or with buffers that account for limitations in capabilities. Moreover, entities must establish unique counterparty identifiers, while also enhancing their governance processes and controls with more defined responsibilities for risk control across both Finance and Treasury functions. Business practice and processes could need refinement in order to coordinate credit exposures across business divisions—for example, risk limits and risk tolerances.

Daily monitoring & reporting for IHCs and CUSO: Exposure aggregation will be required across business divisions for both IHCs and the CUSO. Moreover, reporting of counterparty exposures and quarterly filing of the FR2590 report (credit exposures of a firm to its top 50 counterparties) will increase the need for monitoring of credit transactions and compliance with the final rule.

While the final rule itself has not materially departed from the FRB’s proposed rule on SCCL, it is clear that as a result of the recently passed regulatory relief legislation, the applicability of SCCL has been narrowed for both US and foreign firms. Furthermore, this represents the first case where the FRB has applied the new and provides a window into how the FRB may apply the thresholds in future revisions to regulations and guidance. The new threshold application from the final rule showed that smaller US IHC subsidiaries of larger FBOs remain in scope. In fact, all current IHCs remain in scope as all of their parents have consolidated assets greater than $50 billion. As we observe the new thresholds come into play with this final rule, banking entities must nimbly adapt to the changing regulatory landscape in the industry and understand how their organization fits into not just the final rule to establish the SCCL, but also their other required regulatory frameworks.

With limited time for preparation until the scheduled 2020 go-live date, organizations may contact Deloitte for assistance with strategic planning, preparation, and implementation of infrastructure and processes changes towards compliance with SCCL.

1 S.2155 Economic Growth, Regulatory Relief, and Consumer Protection Act was signed into law on May 24, 2018. Details of the legislation can be found in the Reg Pulse Blog.