The price of a stable RMB Exchange Rate

It has been a very rough ride so far for the volatile A-share market which has lost all of the gains that it had made after the strong interventions of last summer.  As all eyes are upon China’s stock market, which has been a prime mover of global markets (equities, forex, oil, etc.) in recent months, we would like to reiterate our long-held views. 1) The drastic fall of share prices will not result in systemic risk, however, 2) The continued volatility in the stock market has exposed China’s regulatory fragmentation, which is exacerbating downward spirals of prices. The bigger challenge for China in the medium term, will be on the necessary de-leveraging of firms and local government because Chinese consumers will be expected to take up more leverage. It is therefore becoming more urgent for the Government to accept a slower economic growth rate.

In the short run, much of the focus is on the RMB exchange rate, which has been stable on the back of PBOC’s ferocious interventions in the off-shore CNH market. China, unlike most countries, does have ample means to stabilize the RMB exchange rate. The question is, at what cost? In a nutshell, China could do the following three things – 1) engineer a credible one-off revaluation of the RMB in such a way that the market would view the new level as fairly valued or even slightly under-valued; 2) to allow its reserves to run down while gradually pushing up the USD/CNY ratio; 3) to stick to the basket that was announced recently.

The first option has been our preferred approach mainly because as a large creditor, China does not have to worry about rising debt which is denominated in foreign currencies (mainly in the dollar). Also, unlike those economies who rely upon exports of oil and commodities, the collapse of oil and commodity prices has created additional room for loosening Chinese monetary policy. However, how to gauge the magnitude of a one-off adjustment is a huge challenge for policymakers whose mind-sets are inclined towards stability for stability’s sake.

The second option is to run down reserves which China has amassed over years in order to buy time (until the dollar peaks or the economy recovers).  Even taking into account the fact that $4trn of reserves (an all-time high less than a year ago) was way too much for China, to lose $100bn in a month (as was the case in December 2015) seems a lot. China is expected to run current account surpluses of $200bn a year. The net reduction of reserves in recent months suggests that capital outflows are more serious than the data has shown. As of the end of December 2015, China’s foreign reserves stood at $3.3trn while its total imports were less than $1.7trn. In general, a country does not need to maintain more than 6 months of reserves in months of imports (developed countries have an even lower ratio). China on the other hand has been consistently boasting the highest import coverage ratio for several years running. On foreign currency debt, we continue to believe that, based on the data from both BIS and SAFE, China’s foreign currency debt is about $1trn, or 10% of GDP. The appeal of this strategy is for China to run down some reserves which were unnecessarily high to begin with and at the same time to allow firms to reduce their short positions in dollars. However, in order for this strategy to work, China also has to lower the RMB exchange rate at a measured pace. What the recent turbulence in the markets has shown is that it is dangerous for the PBOC to try to outsmart the forex market.

The 3rd strategy is for China to do nothing by sticking to the present currency basket, or the new anchor. The RMB exchange rate, from now on, will be determined by bilateral exchange rates between China and its major trading partners whose currencies are also in the basket. Due to the fact that 1) this basket is new which means that the index has not changed much in value, and 2) the predominance of the USD (26%) and HKD (6%), the only meaningful change can come from devaluation against the dollar.

In conclusion, any options other than a one-off devaluation will constrain China’s ability to reflate the economy. Indeed, the PBOC has not cut interest rates or the reserve requirement rate in spite of downward pressure on the RMB. 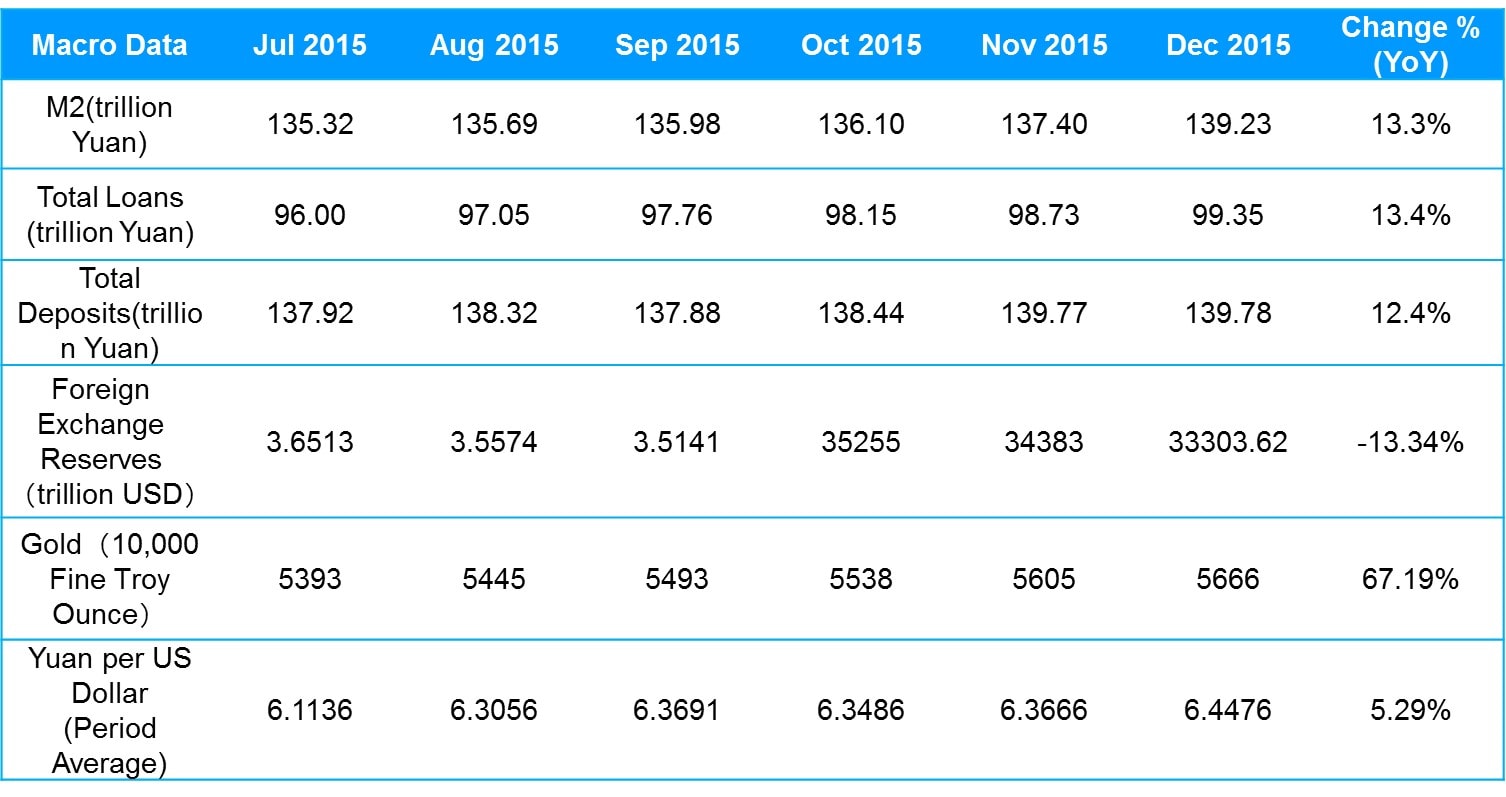 Oil prices have extended their slump this year, with the price of Brent crude oil falling a repeated 13-year low, fell by 16% so far in 2016 - largely due to the worries about the Chinese economy and Iran’s return to oil market. Tension between Saudi Arabia and Iran also put the oil price under pressure as investors feared that the escalation may persuade both not to cut production.

Growth in China's appetite for crude imports remains the one positive factor that investors can count on. Despite China’s sluggish economic performance, demand for crude oil will remain strong in 2016 thanks to sustained crude oil stockpiling. China plans to add about 74 million barrels of new storage capacity in in 2016 so that by 2020 it will be able to triple the strategic storage of crude oil.

Another factor that underpins stronger crude demand is that the Chinese government has eased the rules on imports by private refiners, which is consistent with the government's ongoing efforts to liberalize the downstream sector of the oil industry.

On January 6th, the Ministry of Commerce started to seek opinions from the public on the new automotive sales administrative measures. These will give auto dealers considerably more freedom with automakers on everything from sales targets to financial performance.

The newly drafted rules will allow dealers to sell cars without authorization from manufacturers. For those authorized dealers who had in the past signed annual contracts with carmakers, the new authorization agreement will ensure that a contract will run at least three years. Moreover, manufacturers will not be able to forbid dealers from distributing original spare parts to the independent aftermarket, nor will they be able to impose unrealistic sales quotas and force dealers to sell unpopular models. The new rules should provide auto dealers, who have seen their profits squeezed for years, with increased bargaining power and help pave the way for the transformation of their businesses.

Production of new-energy vehicles increased fourfold to 379,000 units in 2015 according to the Ministry of Industry and Information Technology. The output of purely electric and plug-in electric passenger vehicles rose 300 percent from a year earlier to 142,800 units and 63,600 units respectively, accounting for 38 percent and 17 percent of the total NEV output. Weak sales of gasoline cars, in spite of greater support from the government, has prompted domestic automakers to bet heavily on new-energy vehicles. But given the intensified competition and reduction of financial subsidies on NEVs, it is imperative that domestic automakers improve their R&D capabilities on key components and cut costs through greater economies of scale.

China's automotive production and sales rose 3.3% and 4.7% respectively to 24.5 million and 24.6 million units last year, marking the slowest growth rate since 2013, according to the China Association of Automobile Manufacturers. The booming SUV segment still remains the driving force whereas sedan sales contracted again and MPV sales went into to single-digit growth. Taken together, China's passenger vehicle sales increased by 7.3% to 21.1 million units. Domestic brands, who benefited from their popular small SUV line-ups, have seen their market share expand to 41.3%. But in spite of this, China's vehicle sales dropped continuously in the first eight months of 2015 and demand didn't begin to pick up until September, largely because of the central government’s decision to halve the sales tax on cars with smaller engines. This stimulus measure, which helped lift the market by contributing 124.6% of overall sales, is widely believed to have put future sales forward. For 2016, CAAM projects that the country's vehicle sales will grow by 6%.

Transformation of the logistics industry through mobile internet and platform-based, multi-industry synergy Logistics IT systems. Most global logistics enterprises have advanced self-owned systems synergizing their clients’ multi-corporation B2B transportation businesses. Within China, independent IT system service providers play a key role in the operation of the logistics module even though the market remains scattered, without the usual leading software and hardware logistics service providers. This is because the main business of market participants remains limited to storage or supply chain functions. System integrators do, however, play a leading role in providing consultancy services and solutions and in the future, logistics services providers will be further integrating their service packages, and upgrading service levels to make possible the birth of a new market.

Decentralized platform. Increasingly active logistics platforms have been reshaping and accelerating the integration of the supply chain and squeezing the market share of traditional businesses. Gradually, the internet-based logistics platforms will extend their business scope by integrating logistics, social services, GPS, insurance and the like, while platform value would also be studied in-depth via “big data”.

Cross-border logistics. A recent report on e-commerce forecast that cross-border e-commerce is expected to contribute a larger share of online consumption, growing 30% CAGR to RMB 1 trillion by 2020. The forecasted rapid expansion of cross border e-commerce will require faster, more accurate and more efficient cross-border logistics solutions. lmproving logistics involves several important aspects such as the lowering of clearance barriers, simplifying transfer procedure, reducing the rate of loss and damage and promoting efficiency and speed of refund and exchange. So far, overseas storage and duty free storage facilities have provided some preliminary solutions to these problems but more will have to be done.