In economies undergoing structural transformation, a dichotomy exists between the thriving `new’ economy and the struggling `old’ economy. This is the situation the Chinese economy finds itself in today. But there are signs of hope. For one thing, Chinese consumers have proved to be much more resilient than expected. Such resiliency, which is further aided by an accommodating monetary policy, has bolstered the housing market this year. Last year, though the four first-tier cities (Beijing, Shanghai, Shenzhen and Guangzhou) stayed firm in terms of real estate valuation, concerns over inventory overhangs in most second-tier cities (generally provincial capitals) persisted. This year, however, not only has the real estate boom in first-tier cities continued, but optimism has spread into many large second-tier cities also. The volatile trade sector has seen some recovery in Q2 with May trade surpluses amounting to almost $60bn. In a nutshell, notwithstanding the widely held perception that GDP growth data is somewhat suspect, the Chinese economy does have certain inherent strengths. 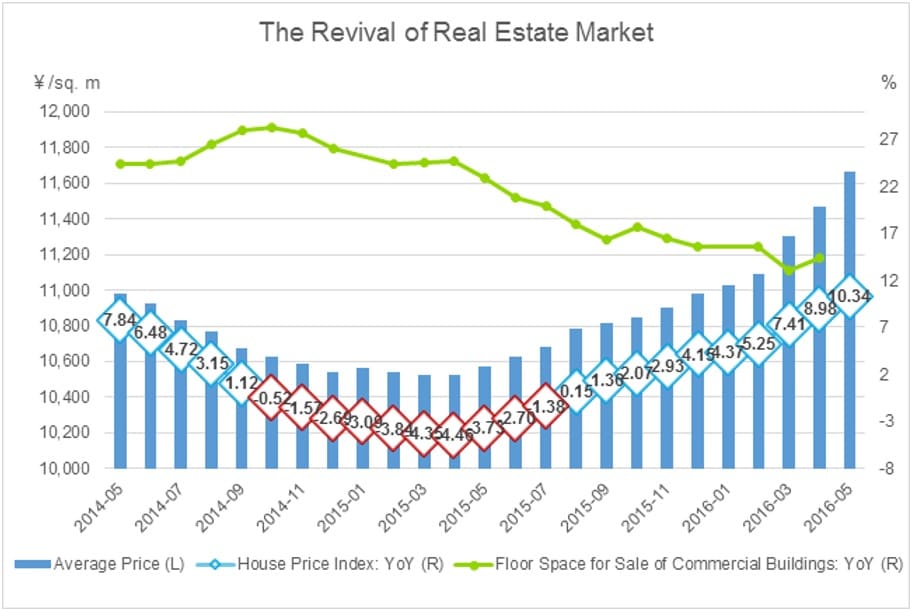 So what are the policy implications of this? First and foremost, the general policy bias has shifted towards growth (we are of the view that a lower GDP growth target would have been better). Second, not only the words but even the very notion of structural adjustment has almost completely disappeared from the official vocabulary. Third, the pro-growth policy mix clearly favors fiscal expansion over interest rate cuts and reductions in reserve requirement rates (logical with the Fed’s tightening cycle underway). Fourth, policymakers seem to think that certain “structural challenges” such as excessive leverage could be resolved by growth over time.

The chief reason behind the increasing shift towards pro-growth policies is the political calendar. With the 19th party congress looming (autumn of 2017), some amount of pump priming is likely to occur. But unlike previous cycles, however, the discussions on “de-leveraging” are unlikely to go away this time. The reality is that the debt/GDP ratio will continue to rise as long as the M2 growth target is 13-14% y-o-y. Unlike other export driven countries which have been hit by crisis, it is almost inconceivable for China to run a trade deficit which requires external investment. Therefore, it is unlikely that China will experience any externally enforced belt tightening. In the short run, China does have ample financing leeway. For example, even certain local governments who are not fiscally strong could finance their obligations through the capital market with terms of 4-5% on USD denominated debt.

We have been arguing all along that, as a large creditor, China will be better off using the RMB exchange rate as an additional monetary lever. The PBOC seems to have learnt something from the experiment of exchange rate adjustment on August 11 2016 (a less than 2% devaluation created turmoil in global financial markets) and if the current real exchange rate of USD/CNY is any indication (the off-shore market saw 6.60 last week), the PBOC would prefer to guide it lower but prevent large exchange rate fluctuations. In the very short term, Brexit (regardless of the actual outcome on June 23) could prolong the strength of the greenback because rising protectionism would lead to a more widespread use of negative interest rate policy and heightened geopolitical risks would reinforce the dollar’s status as one of the world’s principal `safe havens’. Furthermore, as China is anxious to hammer out a trade deal with the EU this summer (as it is widely believed that China might fall short of actual Market Economy Status), external pressure on deleveraging and reduction of over-capacity could intensify. 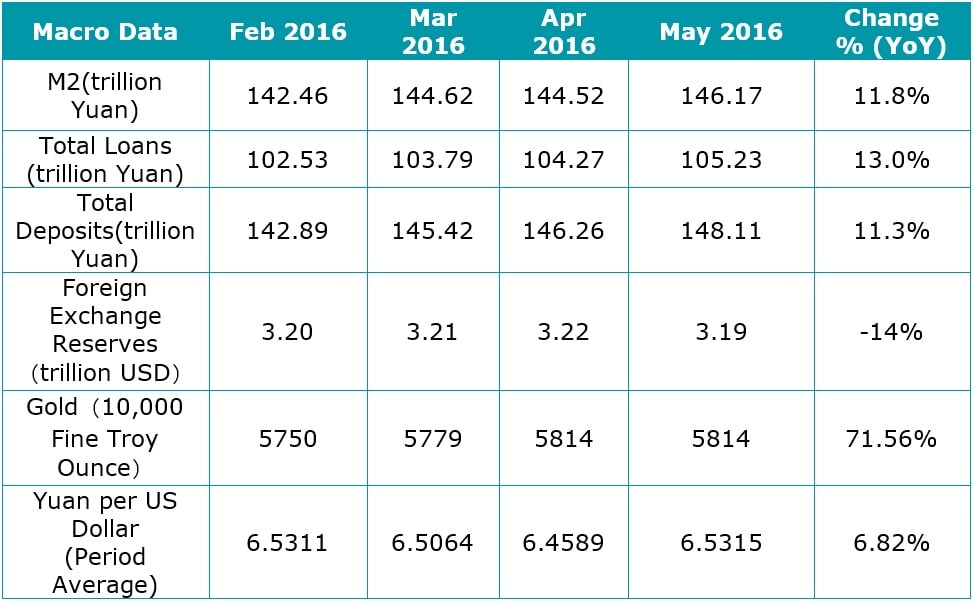 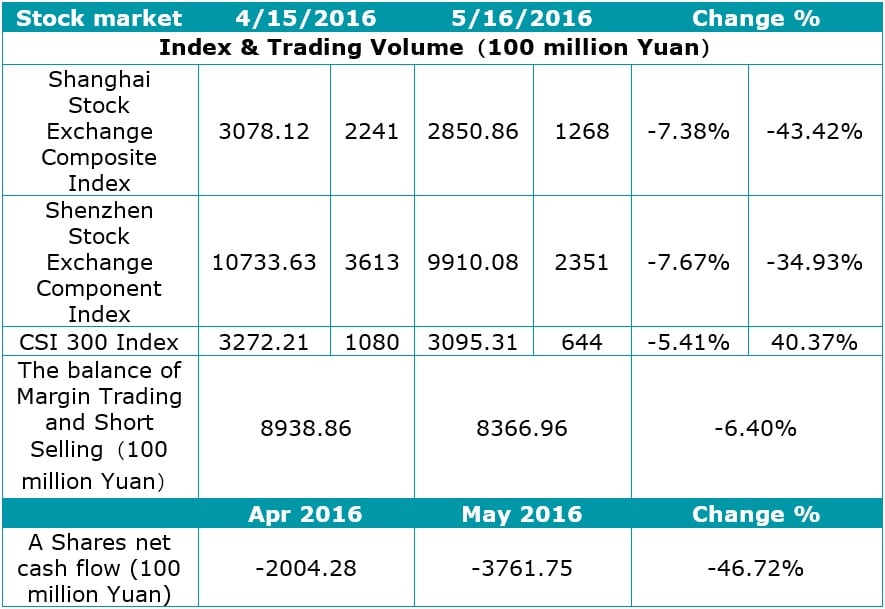 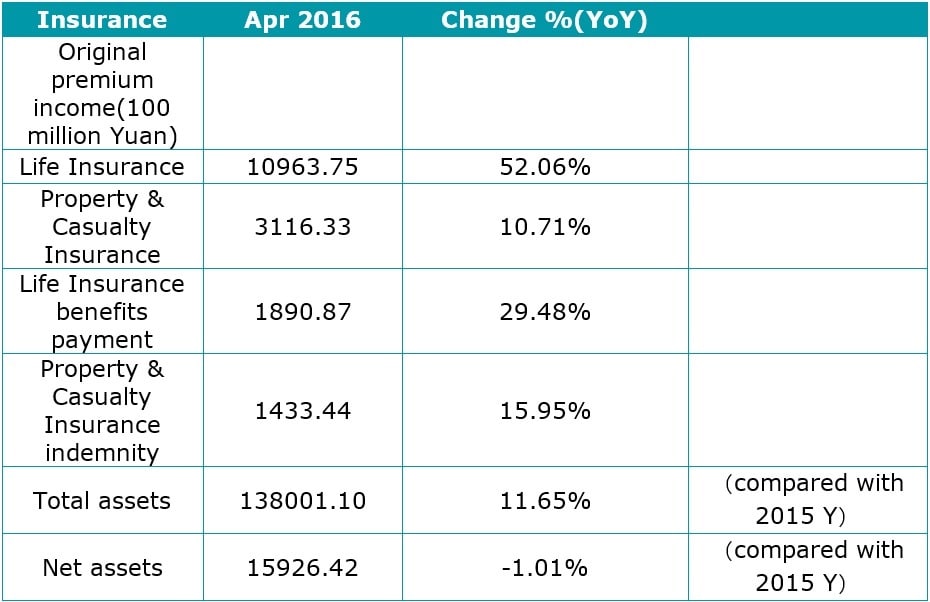 Natural gas imports in China remain high. Over the first four months of 2016 total natural gas imports increased 23.4% compared to last year, from 21.5 billion cubic meters (bcm) in M4 2015 to 26.6bcm in M4 2016. This increase was due to the fact that domestic demand picked-up in response to the new government gas-promotion policy. Gas price reforms and wholesale gas price cuts for non-residential users contributed to the growth in demand. Furthermore, a national carbon cap-and-trade program is expected to be introduced in 2017, which may incentivize more firms to switch to gas, especially taking into consideration the increasing financial burdens imposed upon those using carbon intensive fuels.

The growing support for upstream gas projects will not, in the short or medium term, be sufficient to alleviate China's dependence on imports. This year China will have to import about 71bcm of gas, which will more than double to hit 154bcm by 2025. The major international beneficiaries will be Australia and Qatar in first place, who account for more than 80% of China's existing contract LNG imports, as well as Central Asia (Turkmenistan, Uzbekistan and Kazakhstan), and lastly, Myanmar and Russia for pipeline gas. 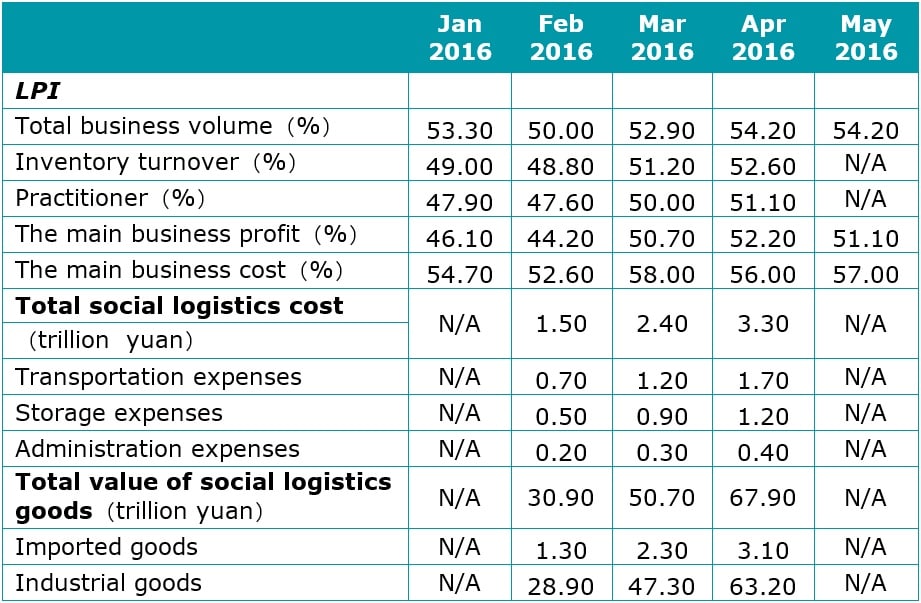 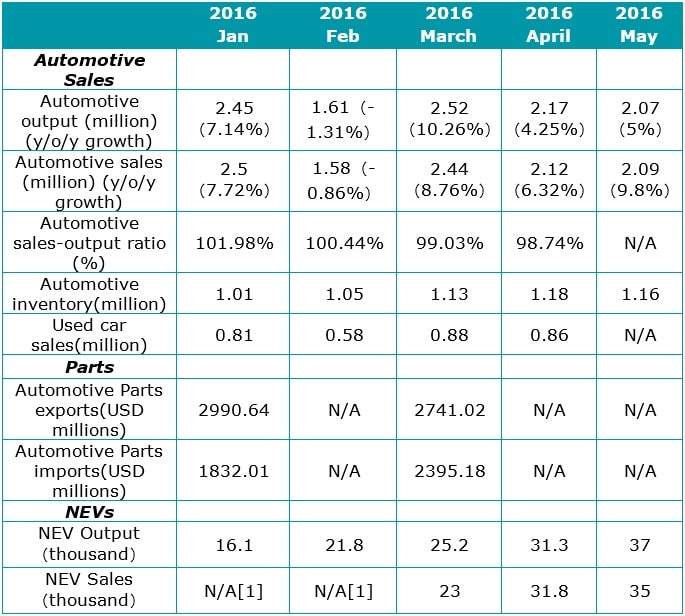 Although many major foreign automakers still view China as their most important overseas market, last year’s high volatility has taught them to be more cautious. It has also made them realize that the Chinese auto industry is now shaped more by market forces than by government interference. Though the Chinese government’s decision last October to reduce purchase tax on vehicles with smaller engines by 50 percent gave rise to a jump in total sales in the last four months of 2015, in the long run, it has only served to bring forward future demand as consumers hasten to take advantage of the tax break. This will cause future demand to shrink, exerting huge pressure on the performance of the auto market in 2017 and beyond.

A year-on-year sales growth of only 7 percent in the first five months of 2016 forecasts a tepid outcome for the Chinese automotive market in 2016. About 9.3 million passenger vehicles were sold from January to May, up 7.8 percent from the same period a year earlier. Demand for SUVs and MPVs remain strong with sales increases of 45 percent and 15.6 percent year on year, respectively. By contrast, sedan and crossover segments saw further declines in sales growth while commercial vehicles, driven by the rebound of truck sales, have seen a sales increase of 2.3 percent year on year.

On the retail side, many automakers in the previous months have tried to boost sales by scaling back wholesale shipments to dealers and increasing incentives. Although the dealer’s vehicle inventory alert index in May dropped 6.9 percentage points from the previous month to 51 percent, it stubbornly stood above the 50 percent warning level. As automakers typically tend to stuff huge stocks of passenger vehicles with dealers in a bid to meet the former’s sales targets for the first half year, dealers will have to work overtime to reduce excess inventory especially when the auto market is about to hit the off-season.

The global auto forum held in Chongqing on June 6 and 7 garnered widespread attention from major auto companies, parts suppliers, auto dealers as well as internet companies, none of whom fought shy of voicing their concerns about the current status of the Chinese automotive market and the challenges ahead. Here is what we learnt:

Overcapacity to persist in the mid- to long term
Against the backdrop of a cooling Chinese economy and weakening demand, automakers have been haunted by overcapacity in the last few years. China had the capacity to produce 31.2 million cars in 2015 whereas the total demand was only 24.6 million, leaving more than 6 million auto production capacity unutilized. It’s estimated that the number will jump to 11.4 million in 2017 as car factories planned in the `good old days’ will come online.

IHS's forecast indicates that the situation with domestic brands is even worse as the average capacity utilization rate is estimated at below 60 percent. When the SUV segment finally cools down and manufacturing capacity cannot be absorbed by any other channels, the overcapacity problem will become acute, severely affect the health of the Chinese automotive industry. Optimists, nevertheless, believe that China's auto market still has ample room to grow as vehicle ownership remains low in comparison with developed countries and because pent-up demand in purchase restrictive cities will be unleashed in the near future.

Chinese brands recover lost ground but still lack pricing power
Chinese brands have seen their market share inching up since last year, thanks to the increased popularity of their SUVs and minivans. About 3.3 million Chinese brand passenger vehicles were sold from January to April, accounting for 44.3 percent of the total PV sales. Chinese domestic automakers have capitalized on Chinese consumers’ infatuation with SUVs in the last few years by expanding their lineups into small and compact SUV segments and attracting price-conscious buyers with low cost and fuel-efficiency. The swift market response helped boost Chinese brands' market share in the SUV segment to nearly 58 percent.

Nevertheless, Chinese brands are still bogged down by competitive disadvantages. Chinese brands, for instance, have seen their market share in the sedan segment shrink for months on end, with sales plunging by 20% in the first four months of 2016. In addition, Chinese brands lack pricing power, i.e. they cannot increase their prices, and furthermore their cost advantages will be further eroded when competition intensifies.

China's NEV industry with reduced subsides
There have been growing worries that subsidy frauds may hamper the growth of China's fledging new energy vehicle market. But the industry has shown surprising resilience - about 132,000 and 126,000 new energy vehicles were produced and sold in the first five months of 2016 alone, up 131 percent and 134 percent year on year respectively.

China's 13th Five-Year Plan has earmarked the new energy vehicle industry as a `significant sector’ in order to narrow the technological gap with foreign counterparts. Chinese brands have been instructed to have annual sales of 1 million BEVs and PHEVs by 2020. Given the heavy dependence on government subsidies by the Chinese new energy vehicle industry, it will be more challenging for domestic automakers to sustain the high growth momentum as the government has started to cut down on financial subsidies which will eventually be phased out after 2020. Besides, EV makers currently aren't able to achieve economies of scale to drive down overall manufacturing costs (not to mention the lack of a steep reduction in the lithium battery price in the short term) which makes electric vehicles less attractive economically.

Automakers and suppliers' outbound investment reached a historic high in 2015
China's automotive exports have been shrinking for the last four years since they peaked at 1 million vehicles in 2012. In the first five months of 2016, vehicle exports plunged by more than 20%. Chinese domestic automakers, having seen their exports contract sharply due to the economic recession and currency volatility in their major export markets, started to invest in Greenfield projects overseas, even though this mode of entry into foreign markets is much riskier and more expensive. Some stated-owned enterprises and large listed companies with deep pockets embarked on a spending spree in the last three years, clinching some 60 outbound M&A deals (worth $17.7 bn). Parts suppliers accounted for a large chunk of the total deals. Overseas acquisitions reached a historic high in 2015.

Dealers count on aftermarket against a backdrop of declining auto sales
As demand cools down and consumers put off new car purchases, automakers have started to expand their presence in the hitherto untapped aftermarket. With the number of vehicles on the road growing and the average age of vehicles increasing, China's auto market is about to enter a "sweet spot", i.e. a period when auto repair and maintenance demands surge. China's automotive aftermarket is projected to be worth RMB1,500 billion by 2020.

Big changes expected in the nature of transportation
A change in the habits of the next generation of consumers has led to a substantial transformation in the automotive industry. Automakers will no longer be manufacturing and selling vehicles. Rather, they will reposition themselves as transportation service providers, smart city operators as well as suppliers delivering in-vehicle. In addition, the rapidly evolving internet of vehicles and the development of autonomous driving technologies will have a great impact on transportation infrastructure, fuel consumption, traffic accidents and so on. By then, not only auto companies but parts suppliers and auto dealers as well will need to change their traditional business models in order to meet the changing demands of their consumers and capture as much value as possible in the future.