How to manage external expectation in a turbulent time?

In his recent Financial Times op-ed piece, Larry Summers former US Treasury Secretary states that, “The necessary reforms if China is to grow sustainably and strongly over the next decade – such as closing unprofitable state enterprises and limiting the ability of local governments to borrow on a vast scale – will surely take a toll on growth in the short run. This will reduce demand for imports from the rest of the world and raise China’s trade surplus.” The 13th five year plan, as expected, has projected a slightly lower GDP growth target of 6.5% for the next five years. The rationale behind this is to ensure that China realizes its goal of becoming a moderately prosperous society by 2020.

The notion of a moderately prosperous society, in our view, is about a more inclusive growth model. In today’s China, being more inclusive means less reliance on investment and greater promotion of consumption. In addition, being inclusive also means more emphasis on environmental protection and poverty reduction. Therefore, a more inclusive growth model may well imply a GDP growth rate less than 6.5% because the previous policy bias towards investment (infrastructure especially) has required the sacrifice of consumption for the current generation.

Meanwhile, external expectations for China to boost global aggregate demand remain high against the current backdrop of sagging growth prospects for most emerging economies in 2016. At the upcoming annual G-20 meeting (Nov 15 and 16, at Antalya, Turkey) and the APEC 15 meeting (Nov 18 and 19, Manila, Philippines), President Xi is likely to explain China’s economic transformation and its impact on the global economy. However, even if China slightly undershoots its economic growth target of 6.5% in 2016, it would still rank as the 2nd fastest growth rate among G-20 (India is forecasted to growth at 7.2%, according to IMF). On the economic front, the divergence between a slowing manufacturing sector and a booming consumer sector is likely to persist in 2016 as evidenced by subdued October data on industrial activities (industrial production clipped at less than 6% yoy) and double-digit growth of retail sales (a proxy of consumption).

The policy responses, as pledged last week by President Xi, would remain an “active fiscal policy and appropriate monetary policy”. In practical terms, it means some fiscal support to stabilize the economy (but stops well short of stimulus) and further cuts on the RRR (reserve requirement rate). With IMF Managing Director Christine Lagarde’s endorsement of the RMB’s inclusion into the SDR (special drawing rights), China could use such a milestone as a catalyst for a fast pace of liberalization in the financial sector (e.g., to do away with QDII and QFII; and to establish a similar link between Shenzhen Stock Exchange and Hong Kong as the one between Shanghai and Hong Kong). The RMB’s inclusion in the SDR would also pave the way for China to move the current exchange rate regime (loosely pegged to the USD) to a basket-based regime. This would probably imply a moderate depreciation in the short and medium term. 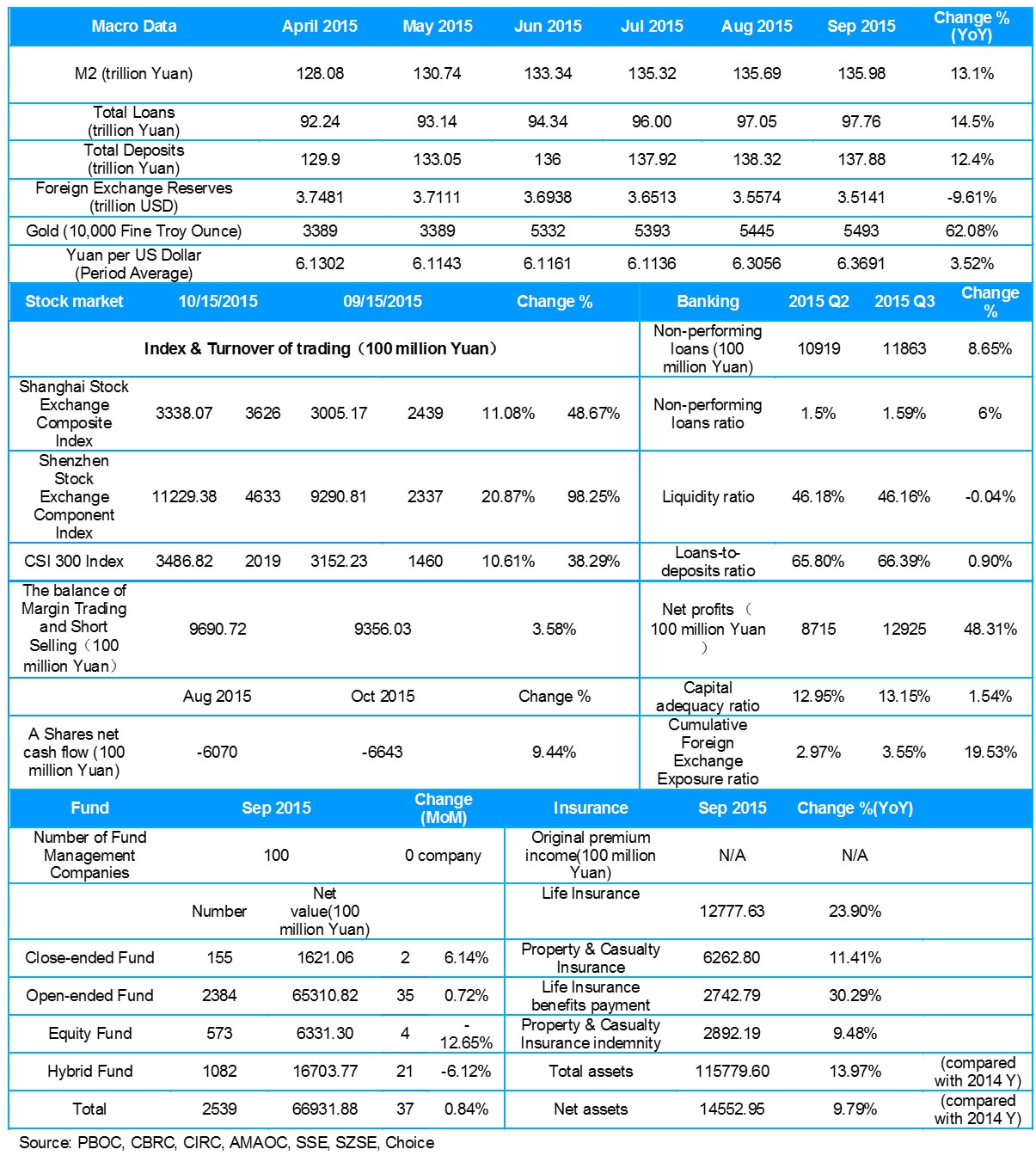 China sets on gas market liberalization and opens up for competition

China is expected to implement further gas price reform measures in November as the government plans to increase the share of natural gas from the current 6% to 10% of its primary energy consumption by 2020. However, gas demand growth slowed to a shocking 2.6% in the first eight months of this year compared to 6.8% growth for the same period a year ago. High gas prices are the main culprits in the slump in gas demand growth. The new price mechanism, though, will link domestic gas prices to international market prices and may bring down the city-gate or wholesale gas price by 20%~30%. The move is expected to boost demand as pipeline operators are likely to benefit from gas supply growth and a fall in the cost of using state-owned terminals for third parties.

Concurrent with the price reforms, China has taken steps to incrementally liberalize its domestic gas sector. Given that the Big Three currently account for a combined share of no less than 90% of China's gas market, the government, thus, intends to make in-roads in this monopolistic setup by broadening the role of the private sector. For example, in 2015 ENN Group became the first private company to be granted the right to build and operate an LNG import terminal. While the government is aware that expanding the market share of private-sector players increases competition which, in turn, ends up lowering prices and ultimately encouraging consumption, the process of liberalization remains slow. An enhanced private-sector access to imports, storage and transport infrastructure – coupled with a more balanced allocation of capital towards the private sector - would be needed to stimulate the desired demand for gas.

After a decline of three consecutive months the Chinese auto market has finally shown a mild recovery with car sales going up 2.1 percent in September, among which passenger vehicle sales grew by 6.1 percent to 1.75 million units. In October, passenger vehicle sales continued to climb, clocking up a respectable 11.3% increase to 1.85 million units, thanks largely to a surge of small engine car sales as a result of a government preferential tax policy. Effective October 1, the Chinese government cut in half the purchase tax from 10 to 5 percent on vehicles with engines no larger than 1.6 liters in the hope of resuscitating weakened demand. This tax reduction policy will remain effective till the end of 2016.

A series of policy initiatives have been unveiled since September to speed up the development of the New Energy Vehicle industry and construction of NEV charging infrastructure. The Guidelines for Advancing the Construction of Charging Infrastructure for NEVs released by the National Energy Administration noted that by the end of 2020 China will build a charging infrastructure of 12,000 charging stations and 4.8 million charging poles that can meet the demands of 5 million EV and plug-in hybrids. Meanwhile, the "Made in China 2025" Plan has unveiled the future roadmap for the NEV sector, with a sales target of no less than 5 percent of the overall auto sales by the end of 2020. Domestic automakers are encouraged to sell one million new-energy vehicles by that time. Meanwhile, in the first three quarters of this year, production and sales of new-energy vehicle increased by 2.7 and 2.6 times respectively to 144,000 and 137,000 units.

E-commerce booming but logistics companies have to level up

While China’s e-commerce industry has continued its break-neck growth, the e-commerce logistics business has also embarked upon a path of spectacular growth as the e-commerce industry continued to build up its own logistics operations and the express delivery industry has continued to expand. In its latest forecast, the State Post Bureau expected the express delivery business to grow by 50% this year, with single-day express delivery business volume to exceed 140 million units on Singles Day (Nov. 11). The State Council, on October 23, 2015, issued a paper entitled "Opinions on Promoting the Development of Express Delivery Industry", in an effort to shore up the domestic express industry. With e-commerce moving into the O2O field on a massive scale, logistics enterprises are forced to make innovative changes to adapt to the new service requirements of an industry which has definitely demonstrated a very high growth potential as a whole. Meanwhile, as industry competition continues to intensify, mergers and acquisitions are likely to become the main trend in the coming year. 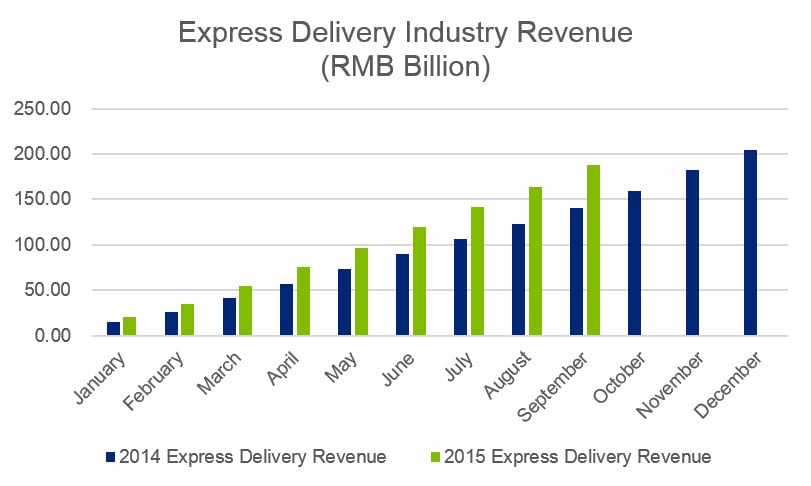 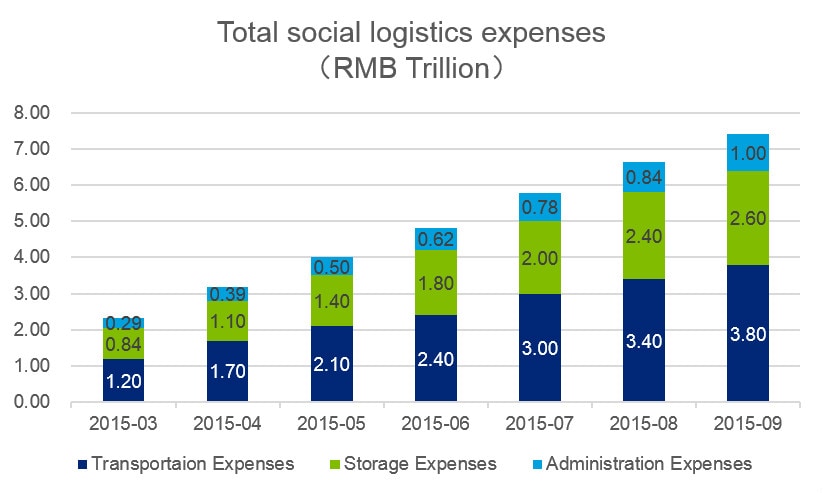