While the impact of COVID-19 on consumer spending is likely to continue for the next two quarters at least, widespread vaccine deployment next year is expected to trigger a revival.

Consumers in the United States, at least those who still have jobs, appear to be back in business as they ramp up spending and adjust to a reality where COVID-19 is still widespread.1 Real2 personal consumer expenditure (PCE) grew by 8.9% in the third quarter compared to the previous one, a strong revival after two consecutive quarters of decline.3 The nature of consumer spending too has changed in the pandemic compared to 2019—many consumers are buying relatively more goods than services this year. A likely reason for this is that people are still wary of the virus, and hence, are avoiding spending at places where the possibility of contracting COVID-19 is higher.

With the pandemic continuing and large-scale deployment of a vaccine still six to nine months away,4 two key trends in PCE will likely emerge. First, consumer spending will continue to feel the weight of COVID-19 and its economic impact for the next two quarters as the job market remains weak. That is expected to change by the second half of 2021 as rising vaccinations thwart the spread of the virus and the public health situation starts returning to normal. This, in turn, will lead to a second trend: By 2022, consumers are likely to start spending more on travel, food services, and entertainment than they have done this year, and spending on durables may lag.

As consumers adjusted to the pandemic, spending revived in Q3

Consumer spending in the third quarter grew by the strongest pace on record since the quarterly series started. This surge in spending was partially due to consumers drawing down savings, which they had shored up in the two previous quarters. Spending in Q3 was surprisingly strong despite the withdrawal of the US$600 weekly supplement to unemployment insurance in end-July. Consumers are more confident than they were at the beginning of the pandemic. For example, the Conference Board’s Consumer Confidence Index has edged up after dropping sharply in March and April.5 It is becoming clear, however, that different parts of the labor market are experiencing very different outcomes from the pandemic with high-wage occupations faring better than low-wage ones, according to a Deloitte study in July.6 Businesses, therefore, need to be alert to the impact on their specific segment of the consumer market. 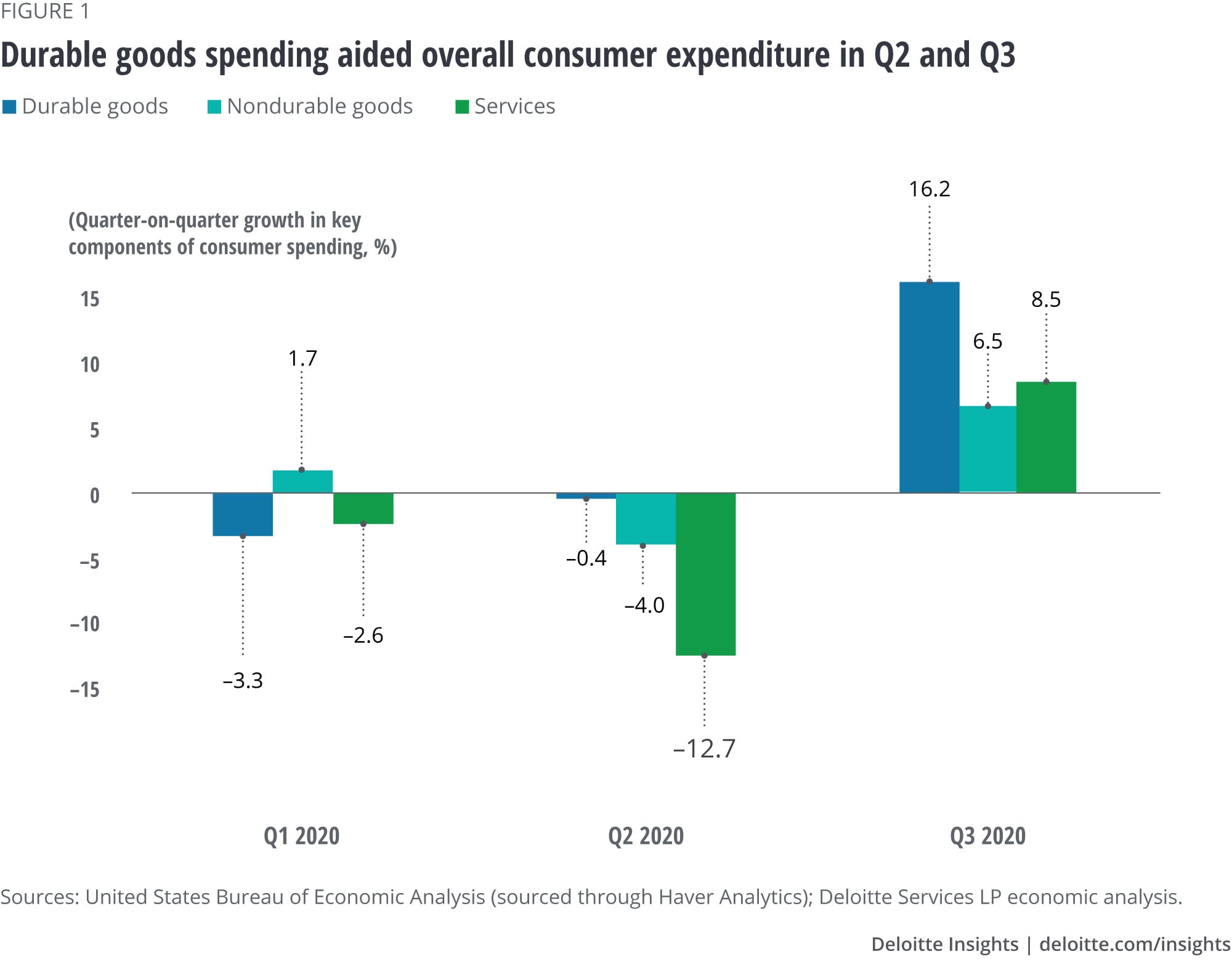 The sharp rise in overall consumer spending in Q3 also points to the extent of the trough in the first half of 2020 (figure 2)—PCE contracted by 1.8% in the first quarter and then by another 9.6% in Q2 as social distancing measures and fears about the virus kept consumers at bay. The labor market too played a part with the unemployment rate surging to 14.7% in April. It’s not surprising that, under these circumstances, consumers held back from spending and saved more in Q2 with the personal saving rate peaking at 33.6% in April. The rise in saving also occurred because, in the initial response to the panic, households stopped spending on services. Later, they increased spending on goods—especially durable goods—but the rise in spending on goods still does not completely offset the decline in spending on services. 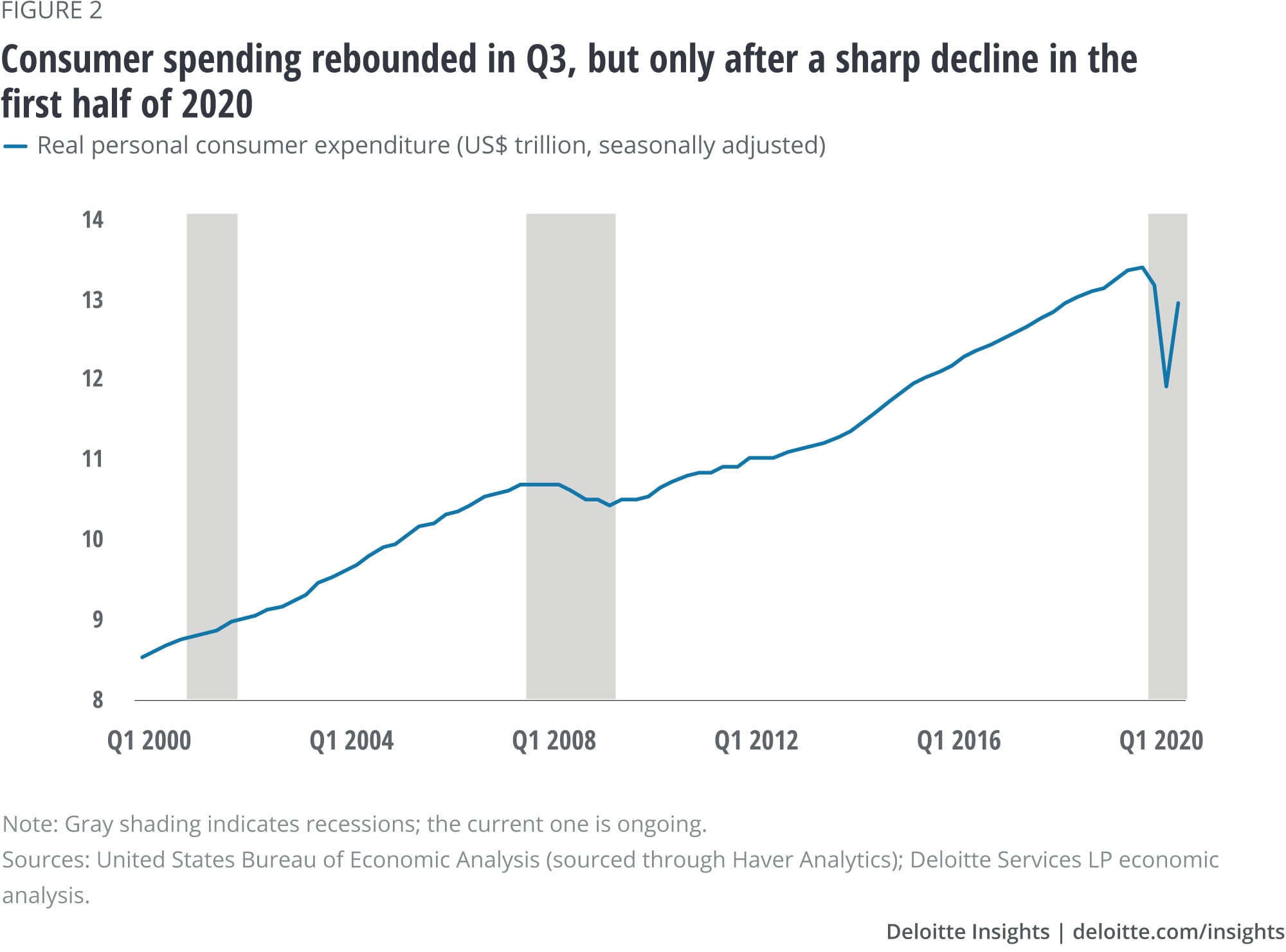 Spending on certain services has suffered more than others

The decline in spending on services was concentrated in those that involved going to venues where the risk of contracting COVID-19 is relatively high (figure 3). Spending on recreational services and on food services and accommodation, for example, fell sharply in Q2 as consumers shied away from theaters, theme parks, restaurants, and bars (figure 4). Spending on transportation services also fell in Q2 (–35.6%) as many people shifted to remote work and shunned shared forms of communal travel as they tried to socially distance. Spending on housing services and financial services, by contrast, hardly changed. 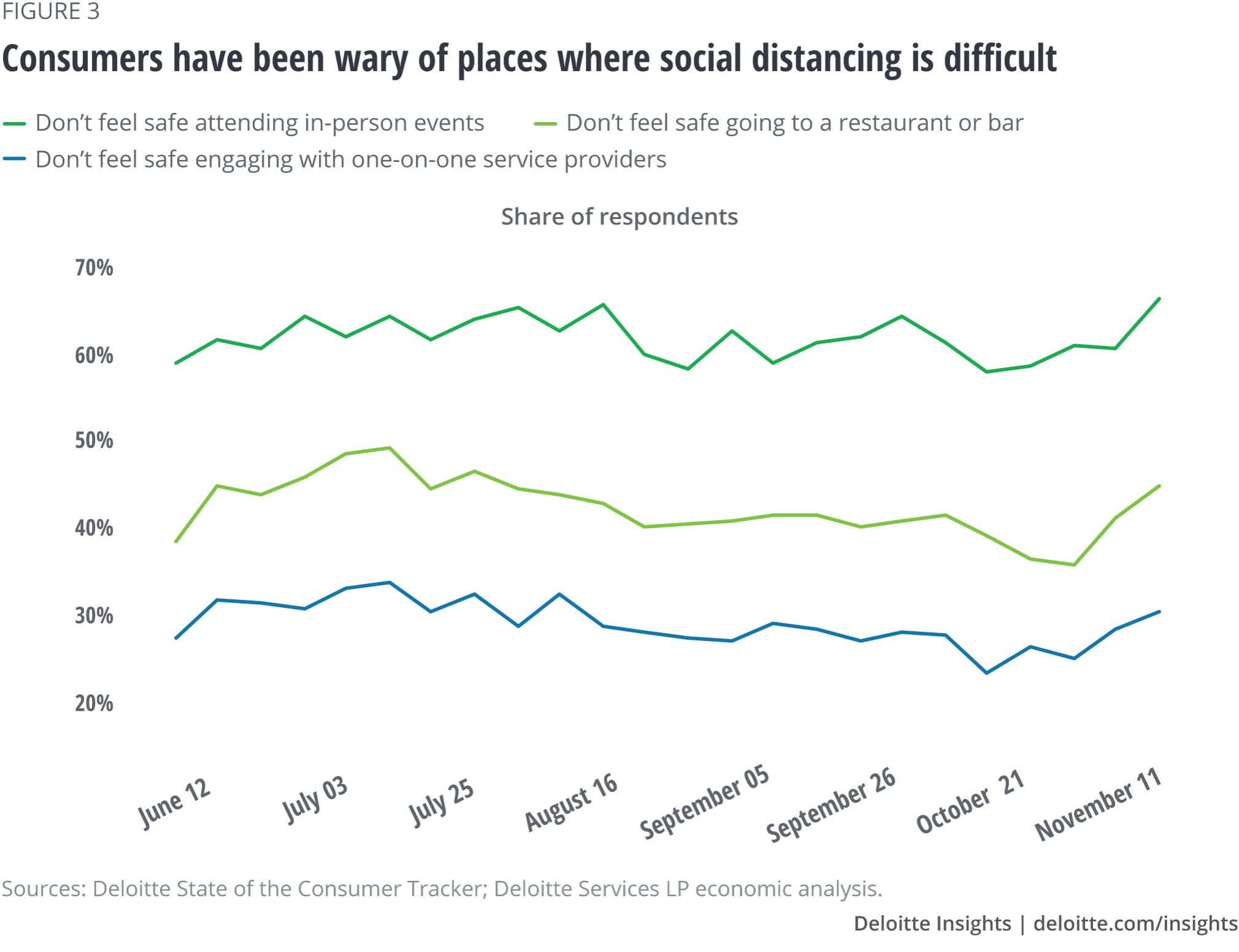 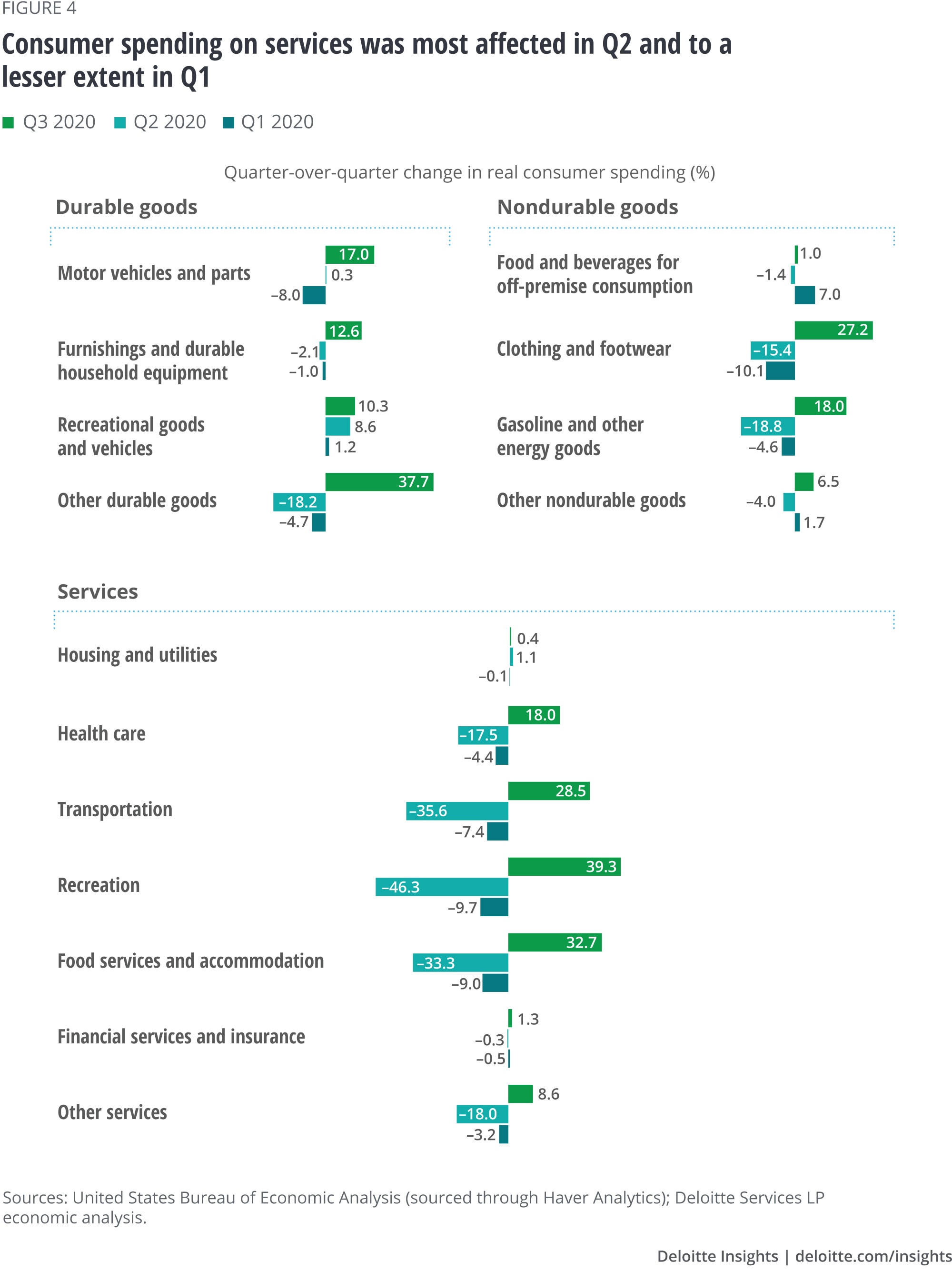 Although health concerns have lessened a bit over time, fears of contracting the virus continue to weigh on spending behavior. Consequently, even though spending on certain services rebounded in Q3, the recovery hasn’t been enough to cover for losses in the previous two quarters. Spending on recreation services is still 32.4% below that in Q4 2019, while spending on transportation services is 23.3% lower (figure 5). This has been partially offset by spending on goods, especially durable goods such as recreational goods and vehicles and motor vehicles and parts. Hence, spending on most goods is now higher than pre–COVID-19 levels compared to services (figure 5). 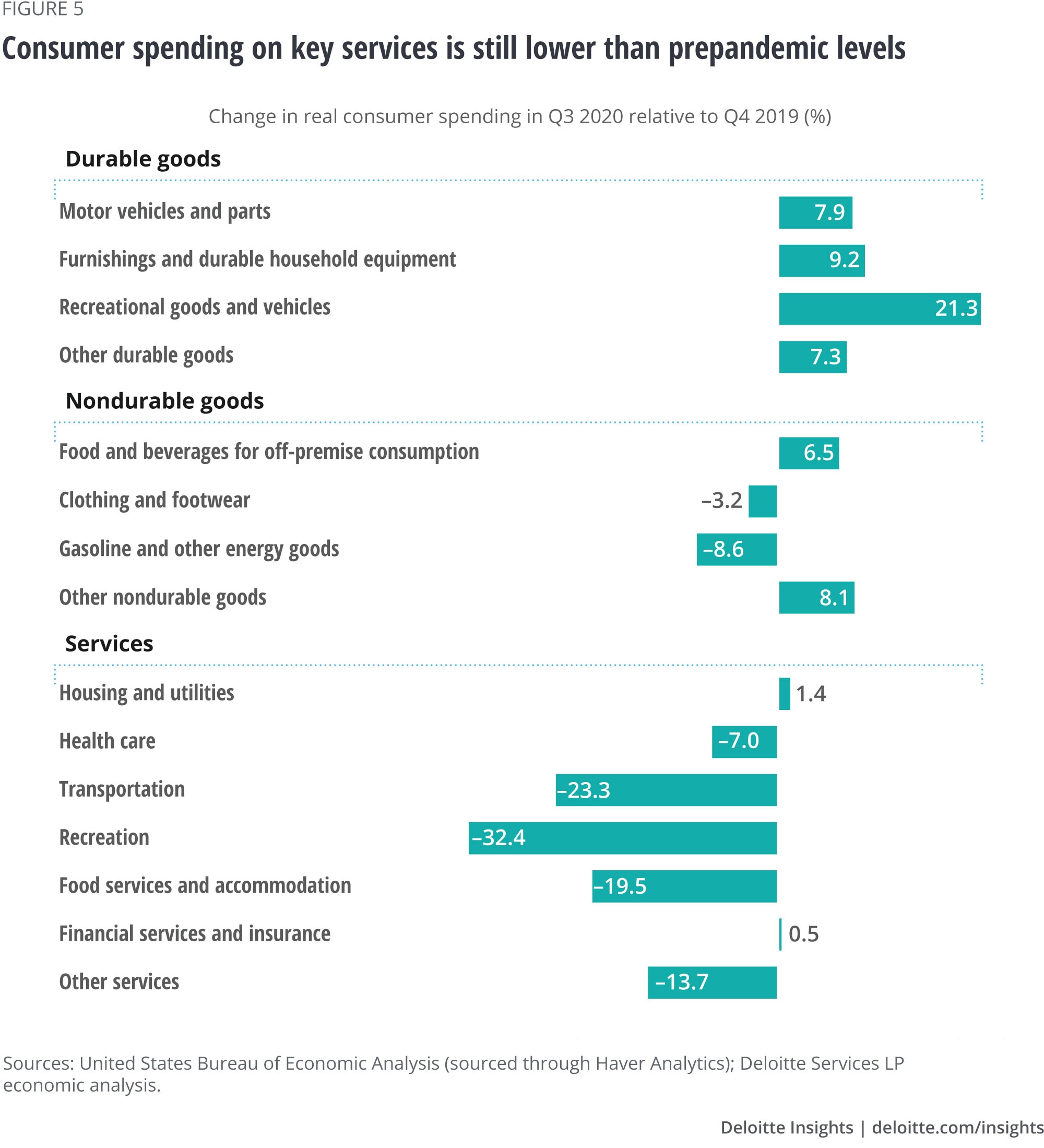 Risks remain for consumer spending in the near term

Despite the rebound in Q3, consumer spending faces key risks in the near term.7 To begin with, a sharp spike in cases, as is happening now, is forcing a tightening of restrictions in some areas.8 This is likely to erode consumer confidence, possibly resulting in consumer behavior reverting to patterns in the early stages of the pandemic. Consumer confidence, for example, as measured by the Conference Board, fell in November with the virus and its economic impact likely weighing on expectations during the month.9

Second, the economy is not out of the woods yet. Unemployment is still high—6.9% in October—compared to previous years and the employment-to-population ratio is relatively low. Many of those who are employed are worried about their labor market prospects—in Deloitte’s latest State of the Consumer survey, 33.2% of those respondents who were employed said that they were worried about their jobs.10 No wonder then, that, the personal saving rate is still high at 13.6% in October.

Third, amid elevated unemployment, the failure to extend unemployment insurance and added benefits will likely result in the unemployed having fewer resources to deploy. This will only add to income inequality given that low-wage occupations have been impacted more by the pandemic than high-wage ones.11

Finally, prolonged virtual schooling because of rising infections and gaps in funding for state and local governments may force participants (particularly women) out of the workforce, therefore weighing on household income.

Given these risks, preliminary data indicates that growth in consumer spending has likely slowed in Q4. If infections continue to rise through the winter, consumer confidence deteriorates, and fiscal relief is absent or weak, consumer spending may well dip in Q1 2021, followed by tepid growth in the subsequent quarter.

Things, however, will likely change with a broad deployment of a vaccine,12 which we expect to happen in the summer or fall of 2021.13 Consumer spending is likely to pick up after that. Deloitte economists forecast PCE to rise by 3.4% in 2021 and then by another 3.2% the year after.14 And as the public health situation trends back to normal with widespread deployment of a vaccine, consumers will likely resume dining at restaurants, visit theaters, travel for vacations, and increase spending on health care services.

According to Deloitte’s latest US Economic Outlook, PCE on services is expected to rise by 6.9% in 2022, far outpacing spending on durables and nondurables that year.15 Whether this forecast is accurate depends on a couple of key questions:

There are some more questions involving long-term behavior. Wider and more frequent virtual working in a postpandemic world could potentially take away from spending on services such as transportation and motor vehicles (no longer needed for commuting). Spending could then shift to other categories such as housing and utilities.

Of course, such changes in consumer behavior would be felt in other sectors, too. From commercial real estate to machine tools to computers, businesses will need to watch and wait to understand the pandemic’s long- and short-term impacts on consumer spending. 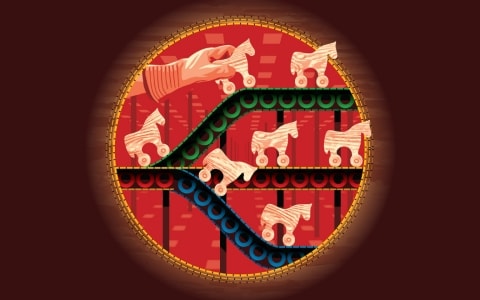 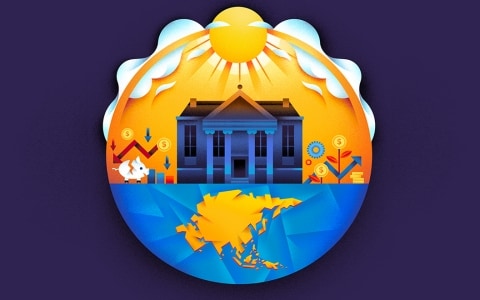 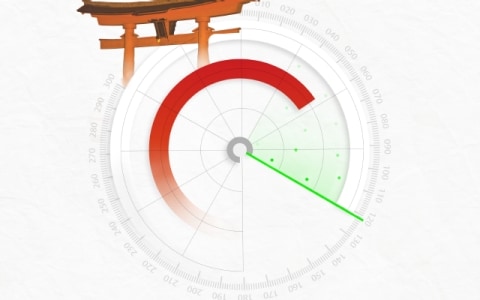