Initial coin offering has been saved

Initial coin offering has been removed

We have all seen or heard the sensationalized headlines about Initial Coin Offerings, or ICOs. But what exactly are these events? Will they really disrupt venture capital as a means to fund development? Are they a sign of an economic bubble, or is there something truly worth considering under the surface? In this paper, we review the fundamentals of ICOs that have taken the market by storm.

Tokens: What are they, and what is the enabling technology?

An ICO, otherwise called a “token sale” or “token launch,” is where a company is creating a new product with an associated utility, and wants to build an ecosystem of stakeholders upfront who will benefit from purchasing the product early. This token sale enables the company to further develop their product with an established user base, and the company can use some of the proceeds to build the product.

However, it’s important to distinguish between coins and tokens, as the two terms are often interchanged in media coverage. A coin is a unit of value native to a blockchain. It is a means of exchange within the blockchain to incentivize the network of participants to use the blockchain. Cryptocurrencies Bitcoin, Ether, Ripple, and Litecoin are all examples of native coins. The sole purpose of a coin is to exchange value, and it has limited functionality beyond that.1

The Ethereum protocol’s currency, Ether, functions as a coin for that blockchain. However, the Ethereum protocol has been widely lauded for its additional smart contract functionality. This functionality allows logic to be coded into the blockchain, creating the ability to replicate, for example, business processes that execute automatically. Smart contracts additionally allow the developer to create a token on top of the protocol. The token can have a functionality beyond an exchange of value—it can represent any asset or functionality desired by the developer.2 When one creates a token in Ethereum, it is created as a smart contract, with each token being governed by a single, unique governing contract.

The debate: Is a token sale the same as an IPO?

There is significant debate as to whether a token constitutes a share or security of company ownership, which suggests that a token sale or ICO is similar in nature to an Initial Public Offering, or IPO3. Despite the similar acronyms, a well-designed token sale has some inherent differences to an IPO as we currently know them. The comparison below highlights some differences. 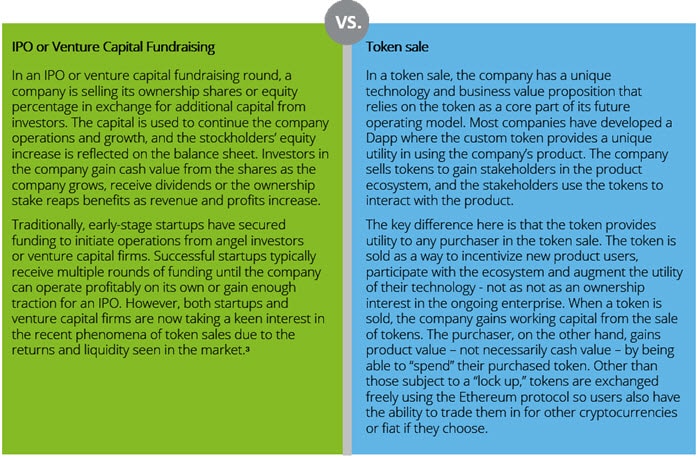 It’s an exciting time for startups to launch and grow using this new business paradigm supported by blockchain technology. It allows them to simultaneously build an ecosystem of users and stakeholders based on an integrated token that provides utility to the users and payment to the service provider. However, there are some risks and challenges observed as the market matures.

One key challenge is the strain created on the Ethereum network as the volume of token sales increases. The sheer volume of token sales, coupled with some improperly designed token sale models, have created congestion in the number of transactions on the Ethereum network.4 This has led to a number of issues which includes delayed distribution of tokens, extreme Ether price volatility, halted or slowed functionality of Ethereum-based Dapps, and exceedingly high gas (the embedded transaction fee) prices5 that inflate the token value.

Combined, these issues could have many consequences for future token sales. If a large amount of resources is required to participate, the pool of potential token buyers will be further limited to a handful of well-funded individuals or groups. Moreover, token distribution and Dapp service issues have invariably affected buyer confidence in the token sale market and perhaps tarnished the reputation of otherwise well-designed products. Liquidity and transparency are core values cherished by the blockchain community, and this issue must be addressed over time in order for token sales to remain attractive to buyers.

Like any new technology, market, or process, it has taken some sifting through the rubble for the gems to emerge. A prospective buyer should carefully study the company, its product, and conduct sufficient due diligence themselves before purchasing tokens. With the rapid growth of token sales in the market, it’s easy to feel that we are in the midst of a bubble. Regulatory changes will determine whether token sales continue to flourish in the long run. However, a look beyond the headlines shows that token sales provide a viable mechanism for companies to build product ecosystems efficiently and sustainably. By creating a token that has inherent product utility, a company can secure a network of suppliers and buyers that is difficult to attain so rapidly by any other mechanism. This unique capability is an exciting new opportunity and value proposition for companies that is unmatched by any existing technology today.

Rob Massey has more than 20 years of professional experience in tax consulting for technology companies. Since 2013, he has focused on blockchain, digital assets, cryptocurrency and tokenization. He s... More

Linda is the leader of Deloitte’s Global Digital Assets and Blockchain group. She is also the Global Financial Services Industry Lead for Cloud Services. Linda’s current roles build on an impressive h... More

Break through with blockchain

How can financial institutions leverage a powerful technology?