Paying to play: The Super Bowl and the power of TV sports to reach&nbsp;younger viewers has been saved

Paying to play: The Super Bowl and the power of TV sports to reach&nbsp;younger viewers has been removed

An Article Titled Paying to play: The Super Bowl and the power of TV sports to reach&nbsp;younger viewers already exists in Saved items

Paying to play: The Super Bowl and the power of TV sports to reach younger viewers

Younger viewers love sports, and advertisers pay big to get in the game

As fragmenting TV audiences reduce opportunities to find key demos, advertisers happy to keep spending more to get into the big game.

Percentage of US TV watchers who watch sports, by age group and gender, 2018 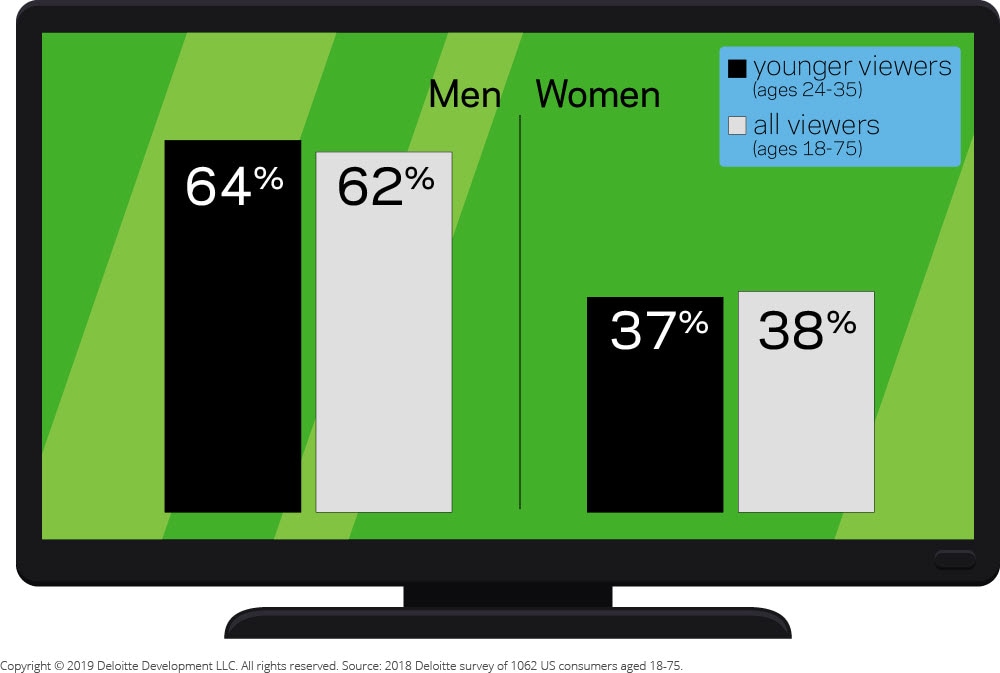 Over 100 million US consumers will watch Super Bowl LIII this Sunday to see which team will win the National Football League’s (NFL) championship game.1 The Super Bowl is also championship time for consumer brands as they compete for the unofficial title of ad, with the ultimate goal of boosting sales.

The Super Bowl is the premier TV sports event in the United States, and advertisers pay handsomely to get in the game. In 2019, a 30-second spot is expected to exceed $5 million for the third consecutive year and will likely deliver around $450 million in ad revenue to the host broadcaster.2

Since 2010, Super Bowl ad costs have risen by a compound annual growth rate (CAGR) of 7 percent, while audiences have declined by 0.4 percent (CAGR). Cost per 1,000 impressions (CPM), a key advertisement spending metric, has increased from $28 to $49 over the same period.3 One might ask whether it’s worth spending more to reach fewer consumers.4

In one sense, the Super Bowl is unique. It attracts twice as many viewers as second most-watched TV program of the year,5 bringing together die-hards, casual fans, and those who love a party. The Super Bowl also proves the power of live sports to reach valuable consumer segments—and why advertisers are paying to play despite escalating costs.

Ratings for the 2019 fall TV season hit a record low, in part because many young viewers are skipping primetime TV.6 Sports programming is more resilient than other TV fare and has unparalleled reach. In 2018, sports programming accounted for 89 of the top 100 most-watched TV broadcasts in the United States.7 Its popularity with younger viewers is a big reason why.

Among TV watchers between the ages of 25 and 34, 64 percent of men and 37 percent of women watch sports. Younger men watch a lot of it: The median 25–34-year-old US male watches sports nearly 17 hours per week.8

TV networks are using their licensing deals with sports leagues to gain subscribers, and head off streaming services. To promote its CBS All Access streaming service, fans can watch the Super Bowl for free on any connected device.11

Expect the games to continue.

This charticle authored by David Ciampa on January 31, 2019.

On hold: More US consumers are delaying their smartphone upgrades

Are consumers waiting for the next wave of innovation?