Positive trends in consumption and the labor market have sustained the economic recovery in the eurozone in the second quarter. Global trade conflicts and regional political uncertainties may be an overhand in the medium term.

Growth in the eurozone is lower than in 2017, but the recovery is robust, driven mainly by strong consumption and employment growth. These internal drivers have made the recovery fairly resilient against external risks.

Growth in the eurozone stabilized in the second quarter of 2018, following a weak first quarter. The eurozone as a whole grew 0.4 percent. Among the larger eurozone economies, Spain again showed the highest growth dynamics (0.6 percent), Germany grew slightly above the eurozone average (0.5 percent), while France and Italy grew below it (0.2 percent).1

The recovery remains intact and solid, albeit not spectacular. Compared to last year when the eurozone grew at a record pace of 2.5 percent, this year’s growth dynamics are weaker. This is mainly due to industrial production and exports. Both developed very strongly in 2017, but have been significantly weaker this year. Industrial production decreased slightly in the second quarter, while the net balance of foreign trade contributed negatively to the growth performance—imports grew more strongly than exports.2

Growth, therefore, continues to be driven mainly by private consumption. The external political risks—like the trade conflict between the United States and China, and the corresponding higher uncertainty—likely affect primarily the externally oriented manufacturing sector. Looking forward, early indicators, such as the purchasing managers’ index (54.5 in September), continue to signal fairly robust growth, even if they have fallen since the beginning of the year.3 In addition, corporate investments are on an upward trend and are developing solidly.4

Private consumption has been the key pillar of the eurozone’s recovery for quite a while now. This is welcome news as it supports a continued and self-sustaining recovery and has made the export-oriented eurozone less vulnerable to external turbulence.

In absolute terms, the eurozone’s private consumption has grown significantly, by around EUR 400 billion, in the last five years (figure 1). This translates into an increase of 8 percent. 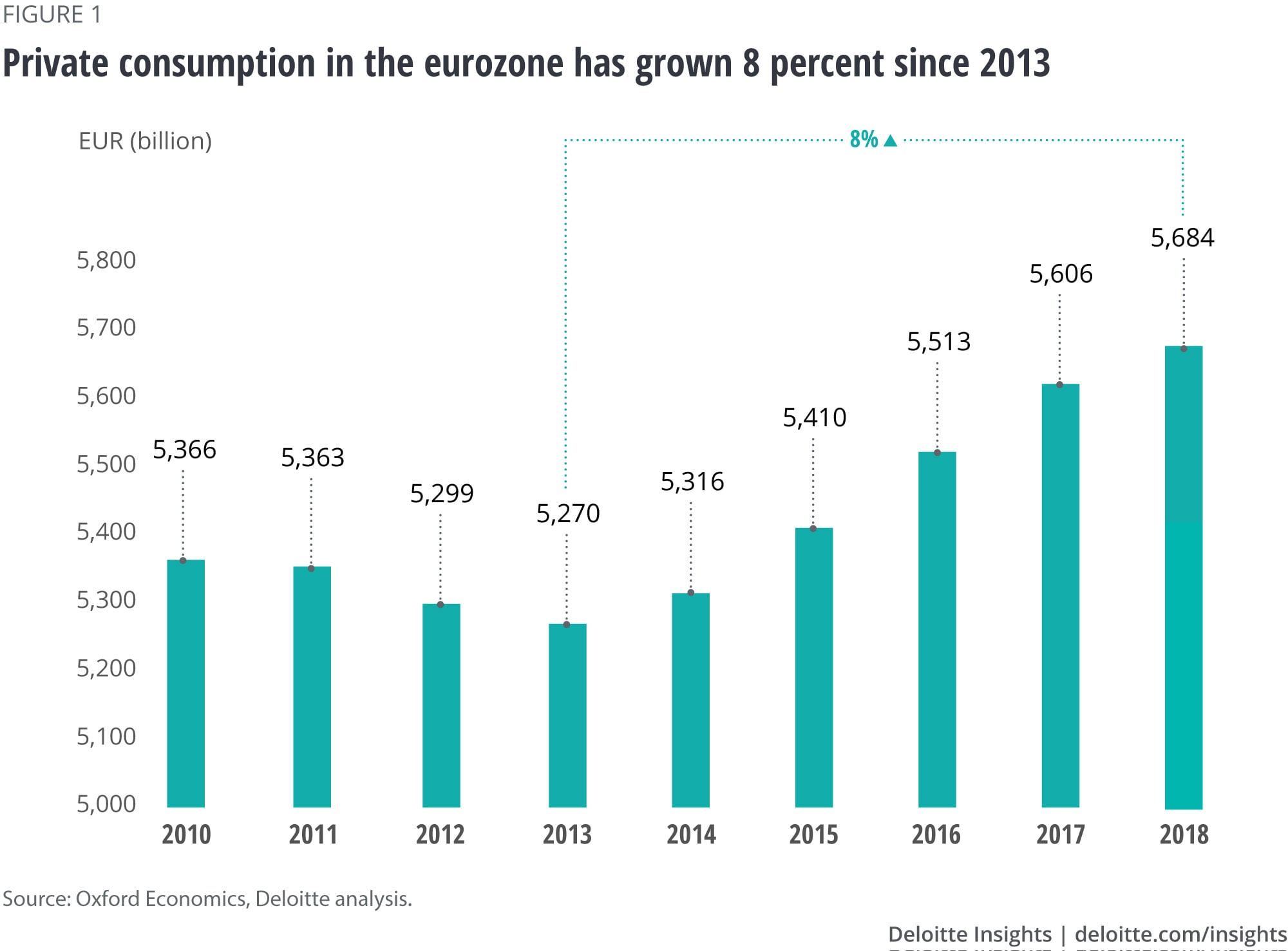 At the same time, many consumers remain pretty upbeat. Much has been made of the fact that consumer confidence fell to the lowest level since mid-2017. However, if we look at longer time frames, the current level of consumer confidence is, in fact, one of the highest—not only since 2010, but also in decades (figure 2). We have to go back to 2000 to find similar positive values as in 2018. 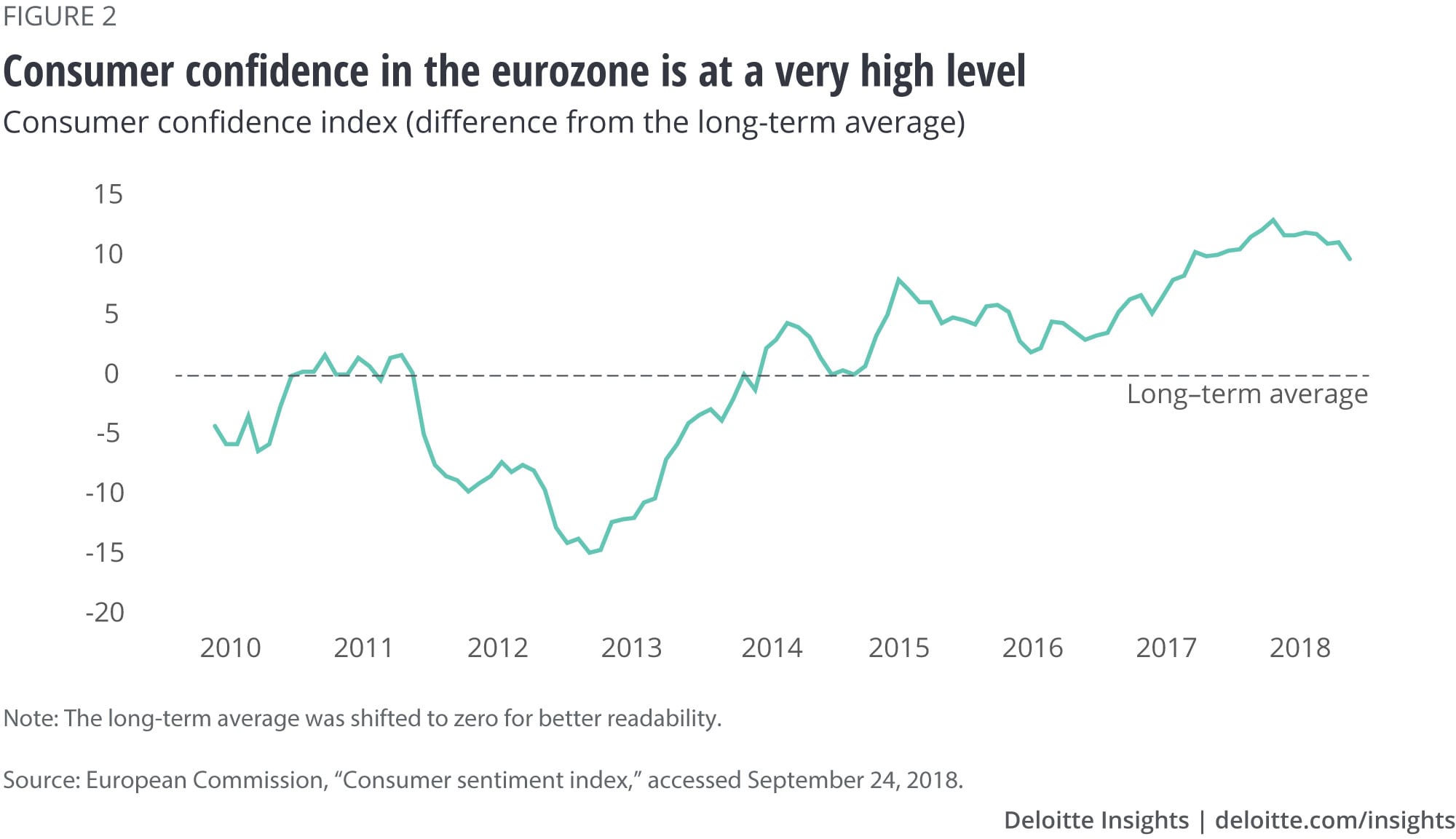 One potential risk for consumer spending in the near future stems from inflation. While core inflation (excluding energy prices) rose to 1.1 percent, overall inflation reached 2.1 percent, the highest in six years. Given that wage increases have not been substantial so far and lag the labor market performance, real income might fall and depress consumer spending.

For the moment, however, the positive consumer sentiment indicates that consumers will very likely continue to drive the recovery. One crucial precondition is the development on the labor markets as the positive trend has driven much of the consumption increase so far.

The eurozone’s labor markets have demonstrated a very positive trend in 2018 (figure 3). The unemployment rate of 8.4 percent marks a nine-year low. The pace of job creation too remains strong. Over the last five years, the eurozone economy created around 9 million jobs, raising the number of employees from 149 million to 158 million. 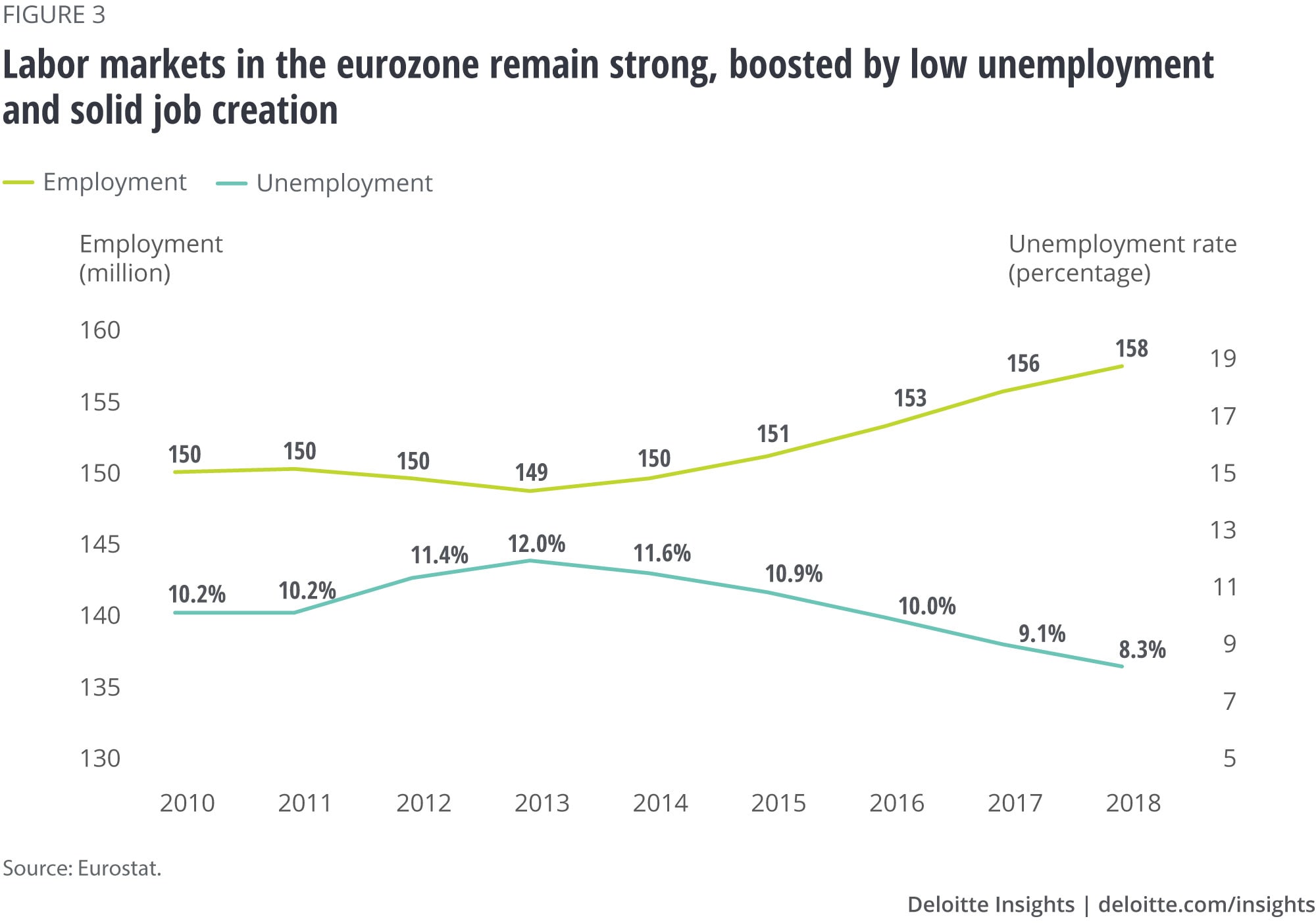 A deeper analysis of employment growth reveals that the biggest job growth took place in sectors related to professional, technical, and scientific services; information and communication; and public services, including health care (figure 4). The employment growth in the first two sectors indicates a further shift toward knowledge-intensive and high value-added technology sectors. 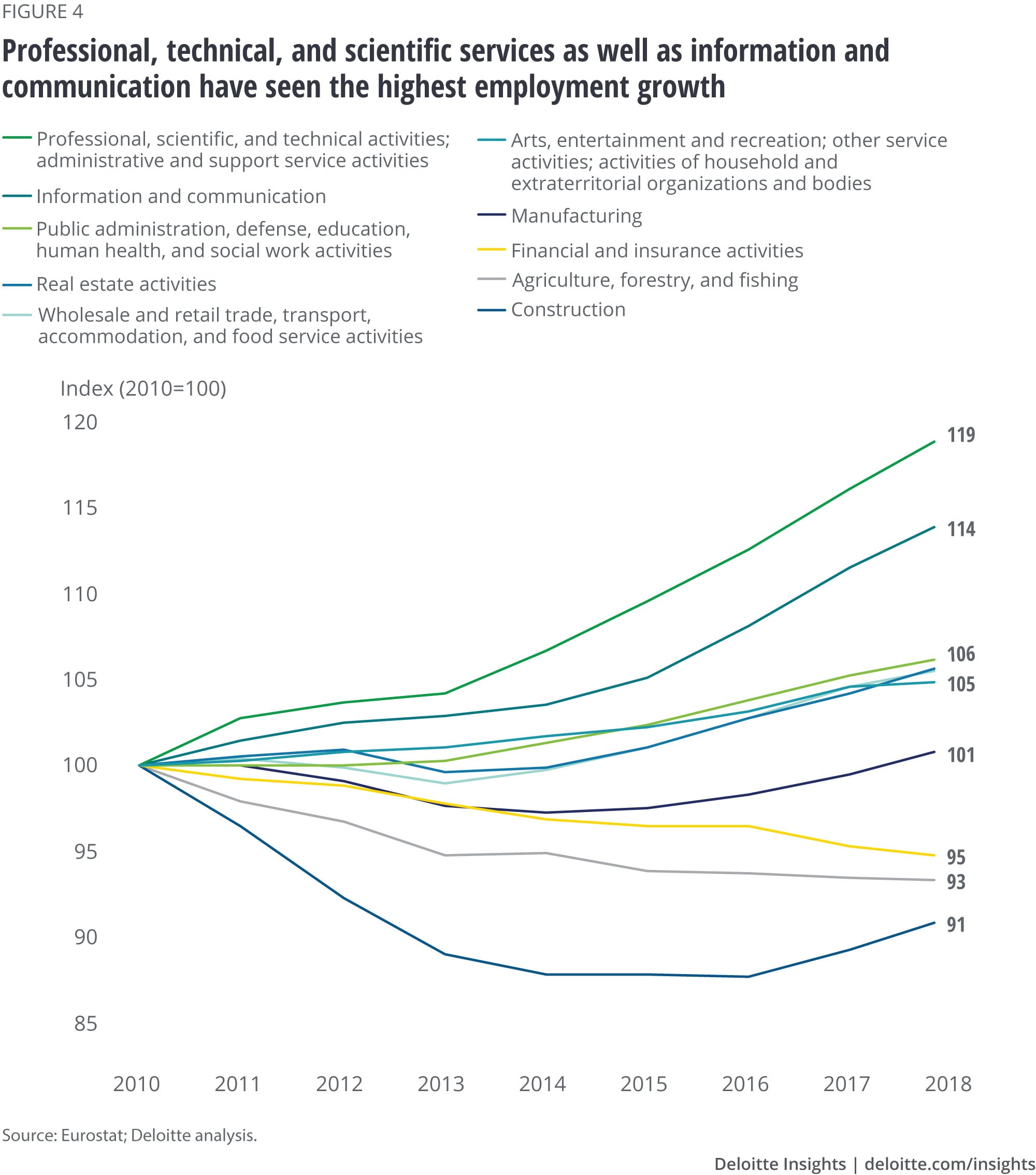 Overall, current growth in the eurozone is mainly driven by a good performance of the labor market, translating to consumption growth. Even so, risks to the economic outlook and the recovery are not hard to find. Global trade conflicts, political cleavages within the European Union, and the uncertainty surrounding the Brexit negotiations all have the potential to increase uncertainty and derail the recovery in the medium term. Nevertheless, as long as the positive trends in labor markets and consumption continue, the eurozone’s recovery looks fairly resilient.

Eurozone: Consumption and employment drive growth has been saved

Eurozone: Consumption and employment drive growth has been removed