I was in third grade when my parents sat me down to give me “the talk.” Earlier that day, I’d been playing basketball with some friends when Illinois state policemen approached us, saying that we matched the description of some kids they were looking for. After they drove away, I sprinted home and told my parents what had happened. I heard them whispering. Then came “the talk.”

I needed to be more careful than my white classmates. 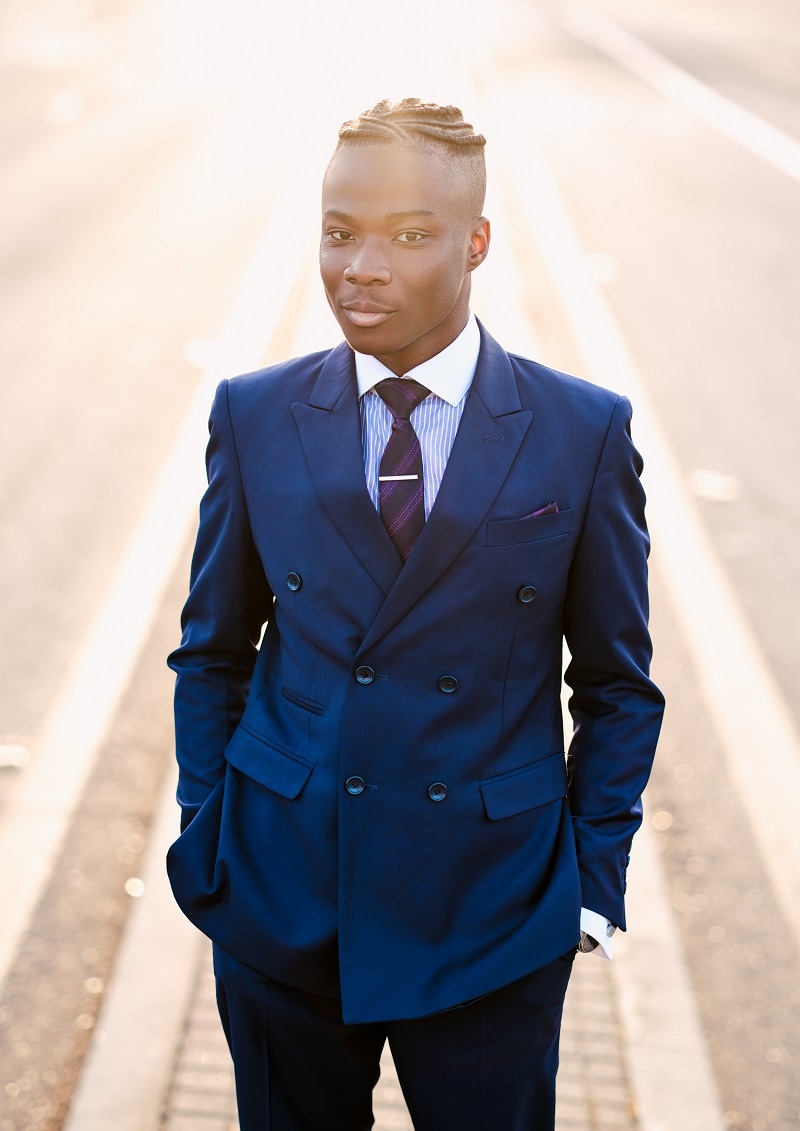 I was born in Lagos, Nigeria, where I lived with my parents and three siblings. I was privileged enough to lead a simple life. My biggest “problem” as a child was the fact that I had to go to school every day.

My parents wanted religion to give me a set of morals and help me navigate situations where they weren’t physically there to guide me. “Don’t let living your life affect others from living theirs” has been my compass through every stage. Both my parents are pastors, so religion played a big role in my young life—and still does today.

When I was in kindergarten, my dad was accepted to a PhD program for theology in the United States. During this period, we moved around a bit, and I went to three different schools, all of which provided me with different experiences that taught me about being Black in America.

I went to kindergarten at a pretty diverse school in Waukegan, Illinois. Although I looked like a lot of the other kids, I had an accent, and I spelled things differently. Fortunately, my teacher gave me the encouragement I needed to get through it and helped me gain trust in the goodness of people. My next school was a different story.

I went to first and second grades in Bannockburn, Illinois, at a well-funded public school, where I was one of only two Black students in class. At the time, I didn’t give much thought to the fact that lunches were provided for me, while most of the kids could afford to bring their own meal. But I certainly felt the disparity. Much later, I came to understand a big reason why: School funding is based off tax dollars, so schools in wealthy areas receive more funding. I felt it explained why students in some school districts were doing much better with their test scores than others.

The most common way people contest inequities facing Black people today is by saying that slavery no longer exists; however, that is the deep-rooted origin of these systematic problems. Learning about inequities like this, knowing I experienced them firsthand and many kids still do, inspires me to work toward helping to make systemic changes.

It was also at this school that my teacher asked what I wanted to be when I grew up. Without hesitation, I said, “President of the United States!” She quickly shot that down. It was a good dream, she said, but it wouldn’t be possible. I was just a kid, and I didn’t understand the prerequisite of needing to be born here. At the time, I had a feeling it was just because of the color of my skin, but I didn’t give it too much thought. When I got home from school and told my parents about this conversation, they told me something that also sticks with me to this day, a quote by Dr. Mae Jemison, the first African American female astronaut: “Never be limited by other people’s limited imaginations.” 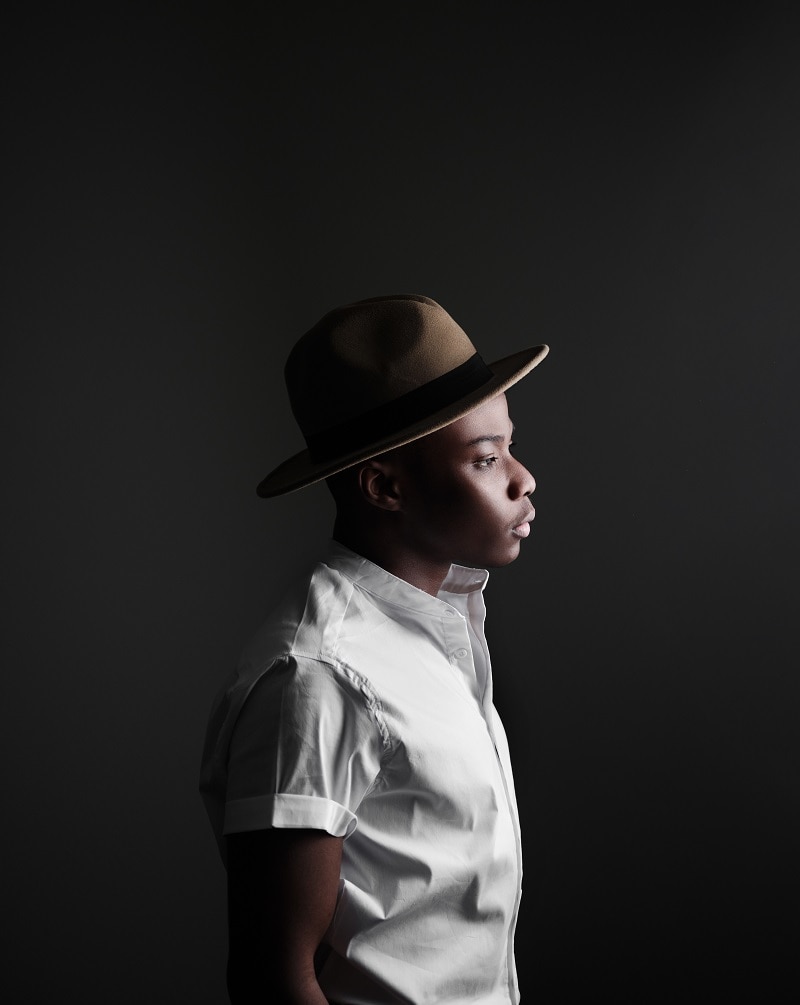 It wasn’t until my third and fourth grade years that I wasn’t a minority anymore. This school, in Hazel Crest, Illinois, was filled with kids who looked like me. But it was also at that school where I began to understand the history of racism that plagued the United States. When researching Jackie Robinson for a school project, I learned about the KKK. Between this history lesson and “the talk,” I felt panicked. I wanted to go back home to Nigeria.

We moved back in 2009, after my dad finished his PhD. Motivated by the AIDS epidemic in Nigeria, he went on to start a nonprofit to help widows and orphans, those who had family members affected by AIDS, and those who needed help for other reasons. Even though I was technically home, I felt like an outsider again—I had an American accent, no current knowledge of the culture, and no friends my age. But I soon realized I didn’t have to worry anymore about the way people saw me. It made me feel empathy for Black people in America who would never feel this sense of comfort. It also encouraged me to embrace my blackness—something that I was inspired to do through the teachings of leaders like Malcolm X and Martin Luther King, Jr. Because of them, I don’t apologize for who I am.

I returned to the United States for college at Calvin University in Michigan in September 2015. I became head of the international students’ association committee, chief economist in the investment club, and part of the student senate governance committee, and I even founded an entrepreneurship club called Calvin Startups.

Most of my fellow accounting and business majors were white men. And, given my school was not one Big Four firms target in recruiting, I knew it would be difficult to be hired at a place like Deloitte. If I wanted to stand a chance, I needed as many extracurricular activities as possible in order to stand out. But I still wasn’t sure I could ever get there, until my accounting professor, Julie Voskuil, encouraged me to apply.

I believe we need to both remember the past and keep an eye towards the future. 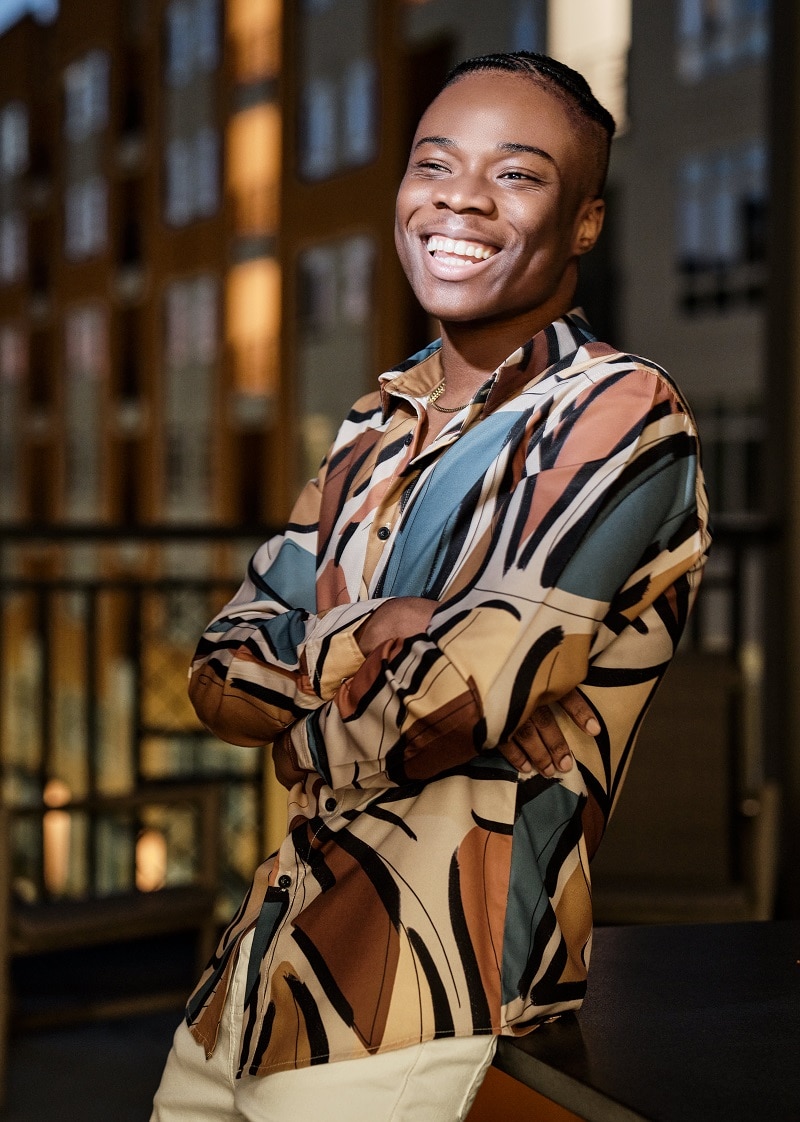 I had always known I wanted to work in business. I like to say I sold my soul to corporations after hearing about how successful Jay-Z was—he broke the conventional mold as a businessman himself. Growing up, however, we never celebrated modern Black people who made waves. We studied Black history for just one month each year, and even then, there was just one project on Black people, from the days of segregation. I wanted to make waves today. I felt like history was happening right now. We have leaders like Patrisse Cullors, Alicia Garza, and Opal Tometi, who founded and grew the grassroots Black Lives Matter movement. We also have modern-day Black leaders in STEM, business, politics, sports, and entertainment. I believe we need to both remember the past and keep an eye toward the future.

I started my Deloitte application process in January 2019, but I had my doubts. Once I got an interview at Deloitte and a few other firms, I felt more confident. I got the job at Deloitte and started in San Jose, California, a few months later.

I was the only Black professional in my start class in the San Jose office. Then, the familiar worry set back in. Did I only get hired because of the color of my skin? Am I filling some sort of quota? It felt like my accounting classes in college all over again. Since most of the new hires in my office are Asian American, my impression was that Deloitte’s target schools for new hires were schools without a large Black student population. I realized we couldn’t just expect to have more Black professionals at Deloitte by simply saying we need more diversity. Something would need to change.

That’s why the proudest thing I have done to date at Deloitte is getting involved with recruiting people from schools that don’t normally attract recruiters from the Big Four. I know firsthand that fear of your resume getting lost in the pile. While some students rely on their school’s alumni network and recruiting events, others don’t have that luxury.

Alumni networks have the benefit of going beyond just recruiting. When you start your job, the school you attended becomes a talking point with senior-level management, many of whom can have an impact on your career trajectory and the type of projects you get. It’s no secret that people like working with those they have something in common with. And while I understand that they are only so many recruiting professionals, I think, if anything, COVID-19 should have taught us how to use our available technology to expand our outreach. I want to help champion this.

I’ve also seen firsthand the issues that are present at Deloitte. I was recently talking to a friend about the lack of Black women in the office. They responded by saying, “Yeah, but this isn’t the type of job Black women do.” I’ve stayed quiet when racist things were said in the past, but this crossed the line for me. I have a sister in law school and a sister in med school. My mom runs the nonprofit with my dad. I couldn’t stay quiet this time. I explained to my colleague the issue with the statement, and they apologized.

I made it a goal to be more vocal about my experience as a Black professional. After the murders of George Floyd, Breonna Taylor, and others this past summer, I realized that I no longer wanted to shy away from hard conversations. I was unable to go out and protest this summer, because I’m in a high-risk group for COVID-19—and because of my visa status, I didn’t want to risk getting arrested. What I realized I could do, however, is talk about the Black experience and share my own story so others can learn from it and see perspectives on Black life in America.

Despite issues that still exist, I think Deloitte has made great strides in listening to its Black professionals and ramping up initiatives to bring more diversity to the organization. But the journey is not anywhere close to over. I hope to continue to be a leader that stands up for what he believes in and show, through my own story, that the Black experience isn’t the same for everyone, but instead an intricate tapestry of stories waiting to be told.

The views and opinions expressed in this article are solely Glory’s own and do not necessarily reflect the opinions of Deloitte or its personnel.

“When people are sharing their experiences about being marginalized, believe them.”

“We can all use our voices for good—and now is the time, when we are having tough conversations, to do it.”