When I first got my job at Deloitte, my mom bought me two pantsuits. I was going to be working at a big organization, and she thought I should dress to fit the part.

I knew I would never wear clothes like this. They weren’t me. I hung them in my closet out of sight, but I carried them with me, so to speak. They lingered in my mind.

I grew up in Philadelphia with my mom, dad, and older sister. My sister has always been extroverted and social, making me, an introvert, feel like I was in the shadows. She was popular, always playing outside with friends. But I preferred to stay inside, reading, drawing, or writing poetry. (She still makes fun of me for it now!) We were—and still are—a very close family, but we are all very different from each other.

Art has always been a big part of my life, a way for me to express myself and to escape from the real world. I remember being in second grade when I started drawing flowers and other still life. I told myself I’d never draw people, though, because it was just too hard.

As I got older, that changed. I liked the challenge of doing difficult things. That is, until sixth grade, when I drew a person’s eye and my best friend said, “That doesn’t look like an eye. It looks like an animal.”

I was so discouraged.

Was I a bad artist?

I decided never to draw again.

That feeling only lasted for a few days, and I ended up going to an architecture and design charter high school. I didn’t go into high school thinking I would change much as a person; I didn’t think my silly, goofball kind of personality needed to change at all.

Around the beginning of ninth grade, one of my teachers said, “I feel like you’re hiding your self-doubt behind your silliness. You’re not paying attention in class. You need to do more work.”

My first reaction was, “You don’t know me!”

But when I thought about it more, I realized he was right. I was afraid to draw things I’d never tried before. I was trying to stay in the shadows. Out of sight, out of mind. 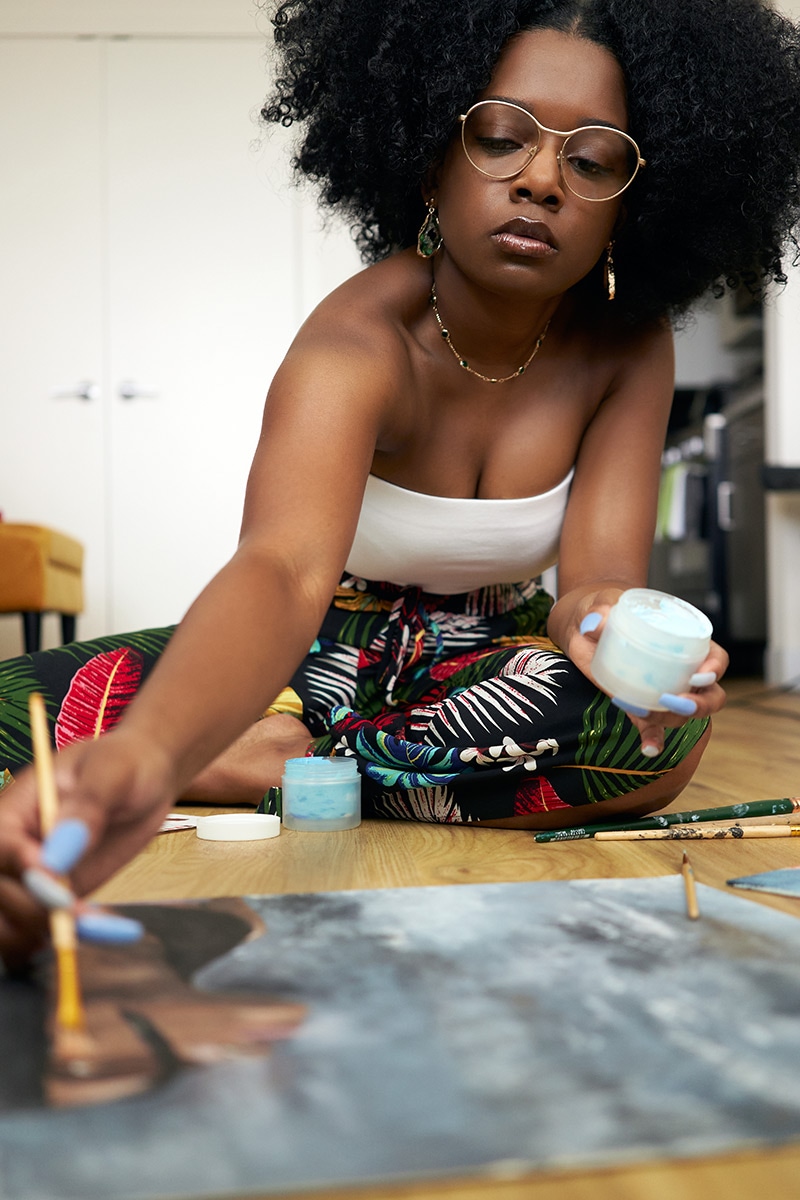 My art is so personal to me that when it came time to find a career after high school, I didn’t see myself going into a creative field.

So, I got a job at a pharmaceutical company as a conference room coordinator. Starting my career as an 18-year-old Black woman was interesting, to say the least. I worked with mostly older White women, and it felt as if they didn’t know how to respect me. I would observe how they naturally interacted with each other. When it came to me, I sensed a hesitation. When they did talk to me, they often gave backhanded comments. One woman would walk in and say, “Good morning, little girl.”

We all had to wear uniforms to work, but I would often add jewelry or other pieces so I could feel more like myself. I remember the same woman once said, “I could never put anything like that on myself.”

It wasn’t an insult per se, but I had no idea how to respond. I knew I didn’t want to work there anymore.

I also knew I needed a full-time job. Something that was stable, with benefits and a good backbone. My mother has been in banking for more than 35 years and knew a lot of people. This helped me to connect and get my foot in the door with a good position. So, I switched jobs and became a bank teller. I got the chance to work with other Black women, and I felt a bit more comfortable. I quickly began to realize it wasn’t for me. I was forced to wear stockings under my pants, something I really didn’t want to do, but feared getting in trouble with management if I didn’t. The dress code was so constricting; I had to pretend to be someone else.

One day, an older Black man came in and asked me to waive a fee. After I said no, he said, “You can’t help a Black man out?” I said no again, and he left the bank, shouting, “You’re just a Black girl trying to act White.”

Acting White? Just because I was trying to do my job?

That was the final straw.

Over the years, I have taken the time to get to know who I am, and sometimes have to remind that person inside that it’s okay to make mistakes, it’s okay to be a bit different.

Through my mother, I met a woman who had been with Deloitte for quite some time. She said it was a good organization, and she knew a position was opening. After doing a lot of research, I decided Deloitte sounded like a great place to be. I applied for the role and was excited to learn I got the job offer.

I started in December of 2016 and was going to be taking the place of a woman retiring after being the sole receptionist in the Philadelphia office for 50 years. Everyone had been so nice during that interview process, and I was so excited about the opportunity to be at a place like Deloitte.

My chronic self-doubt began to creep in. My new team members kept telling me I had such big shoes to fill, how great my predecessor had been, and that they weren’t sure if I could live up to her legacy.

Taking over for someone who had been at Deloitte for 50 years stressed me out at first. But just like I had overcome selfdoubt in other parts of my life, I decided that I wouldn’t try to fill anyone else’s shoes, because I was already walking in my own. From there on out, my goal was to be the best version of myself. I wasn’t someone’s replacement; I was my own person.

It hasn’t always been easy, and at times, I’ve felt like I should have taken my mom up on the offer to wear the pantsuit.

My art impacts me at work, especially when it comes to my style and self-expression. I often wear my hair in a big, curly fro. I love bell-bottom jeans and wearing bright colors. I’ve always been a little different. And although I embrace it and show off my love for myself as a Black woman in my artwork, there are moments where I still feel self-doubt in the workplace, like on the day an older man walked into the Philly office.

I told him good morning and asked how he was doing. I felt that he completely ignored me. He walked over to my male coworker sitting next to me and asked him a question he would not know the answer to. I finally said, “I can help you with that,” and then I pointed him in the direction he needed to go.

I felt similarly when a woman who was in the office for a meeting asked me to turn up the temperature in the room. A little while later, still cold, she came out of the meeting room and started telling me how incompetent I was. She said that I wouldn’t understand, but there are high-level leaders in the meeting, and they needed this room to be comfortable. Her anger culminated in, “I understand this is not in your pay grade.” 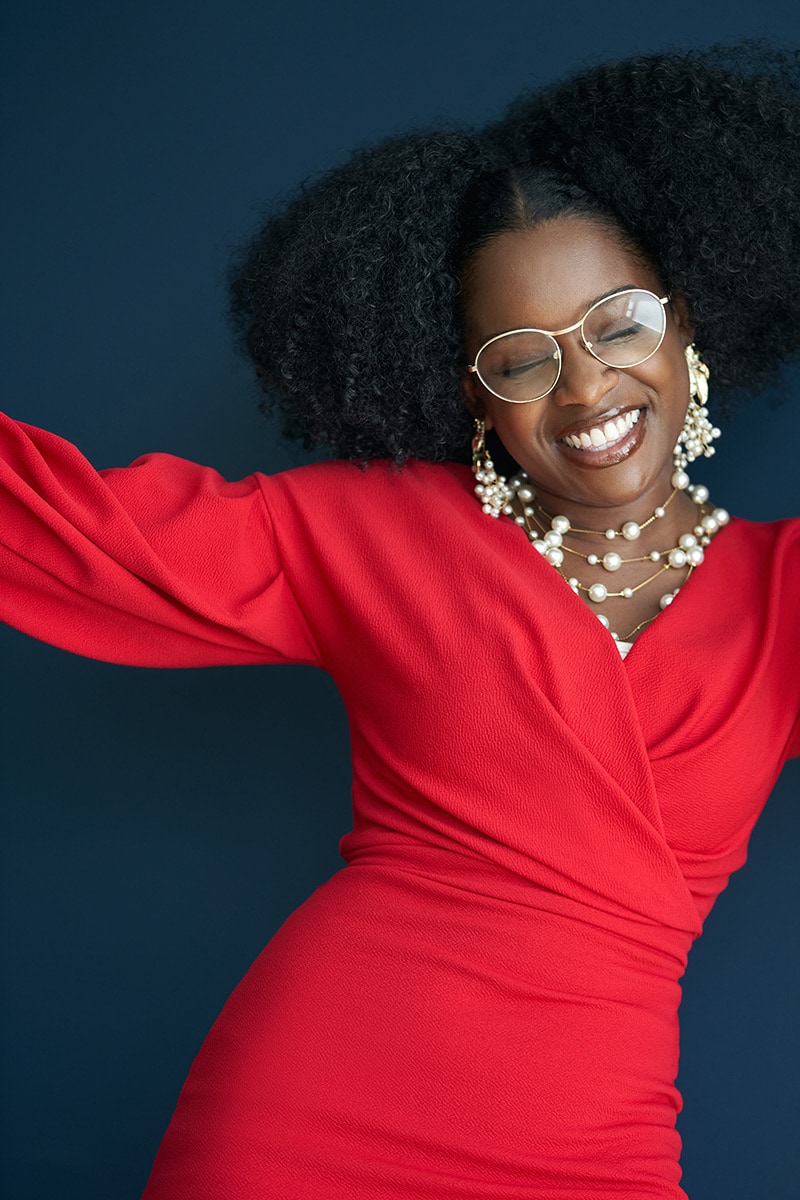 It’s interactions like these that have inspired the art series I am currently creating on Black women. My work showcases the emotions I’ve always felt, and that many other Black women feel, about not being good enough. It brought back all the times I feared being myself. It is something I still think about, wrestling between my love for myself and fearing being myself.

But, over the years, I have taken the time to get to know who I am, and I sometimes have to remind that person inside that it’s okay to make mistakes; it’s okay to be a bit different. And that’s one thing I appreciate about Deloitte: Our culture encourages those differences.

From day one, I saw how others dressed. Different hair styles, clothes, and nails were all okay and looked professional. In fact, my colleagues always tell me how they love what I’m wearing—not in a condescending way, but in a way that shows that they appreciate me for being me. Outside of some singular moments, I have never felt like I was perceived as weird or different. Unlike other places I worked, I can be my true self here.

The emphasis Deloitte puts on inclusivity and diversity is very encouraging. Some colleagues say that Deloitte is going over the top with their efforts, but I love the diversity training and often watch the video lessons nodding “yes,” because I’ve been in that position, or someone has said those exact words to me, even if it was unintentional.

I think, as an organization, that’s where we can really improve: by not just listening to the trainings or reading about the DEI initiatives, but also taking it upon ourselves to make a real impact so everyone in the organization feels comfortable, regardless of their age, gender, or race. Everyone deserves to be themselves.

In February 2021, Deloitte showcased some of my most recent artwork in a newsletter sent to the whole organization. It was a piece depicting a Black woman with her eyes closed, wearing hoop earrings and her hair in two big afro puffs. In that moment, I felt like people were seeing me for me. I finally wasn’t being compared to someone else.

So, a few weeks ago, I went to my closet and found the pantsuits my mom gave me. It was time to get rid of these. I didn’t need to hold onto something that would cover up everything I am.

The views and opinions expressed in this article are solely Valisa's own and do not necessarily reflect the opinions of Deloitte or its personnel.

“I had seen with my own eyes, as a veteran and a Black man, the struggles people often have to overcome to find their place in the tech world. I wanted to help others, like those who have helped me.”

“Don’t shy away from the things that make you different. Because those are your superpowers.”