Many emerging economies, which benefited significantly from the capital inflows post the 2008 crisis, are now staring at the possibility of this liquidity drying up. We take a look at what will happen if and when the tap runs dry as the central banks of four major advanced economies tighten their monetary policies. ​

If you have your ears on the chatter about the water crisis in Cape Town, South Africa, you could indeed be worried about a similar scenario in your home town.1 The potential crisis has manifold implications, bringing sleepless nights to policymakers, many of who are already grappling with a liquidity crisis of another kind. As many major central banks in advanced economies turn their backs on years of ultra-loose monetary policy, global liquidity taps are likely about to be turned off.

The issue has its origins in 2008–2009, when major advanced economies’ central banks embarked on ultra-low interest rates and rapid balance sheet expansion to prop up their economies in the face of a global downturn. Liquidity shot up in these economies as a result and bond yields fell. Naturally, many global investors turned their attention elsewhere for higher returns and soon an unprecedented volume of funds found its way into emerging economies’ bond markets. While this fund flow was initially welcome, the surge in liquidity also made many of the receiving economies vulnerable to sudden capital outflows while raising nonfinancial sectors debt and banking sector risks. And this vulnerability has only increased in recent days. With the United States Federal Reserve (Fed) now charting a journey away from the days of large balance sheets and ultra-low interest rates, the Bank of England (BoE) raising rates for the first time in 11 years in November 2017, and the European Central Bank (ECB) also hinting at joining the bandwagon, the potential impact on global liquidity, especially in emerging economies, is worrying investors worldwide.2

Economic fundamentals within advanced economies further complicate the issue. For example, the pace at which their economies are recovering and their labor markets are strengthening seems unsustainable as growth in the workforce and in productivity in many of these economies remain weak.3 The likely impact on inflation and inflation expectations could result in a much tighter monetary policy in these economies, thereby pushing up their sovereign bond yields. If that happens, investors might shift their investments back to advanced economies. Given the outstanding volume of capital that has penetrated the world around, a reverse outflow of even a small fraction of it can have a meaningful impact on some emerging markets. What emerging economies would hate to see, especially when global growth and trade are on an upswing,4 is a surge in capital outflows jeopardizing their growth prospects.

Will such capital outflows, if they happen, result in a situation similar to (say) the Asian financial crisis of the 1990s for emerging economies? Not likely. Emerging economies today are in much better shape than they were during the 1990s. Their economic fundamentals are relatively stronger and their currency reserve positions are much improved. Their banking systems are more prudent and vigilant, thereby providing stability to the financial system. In short, most of these emerging economies are much better placed to handle financial turbulence than in the past.

The road to liquidity highs

Since the turn of the century, one of the dominant drivers for capital flows across the world has been high global liquidity spilled over due to the monetary policy from advanced economies—often referred to as the “push” factors.5 Prior to the 2008 crisis, looser financial conditions in advanced countries through the acceleration of banking sector capital flows led to higher liquidity. Post the crisis, the composition of liquidity changed as cross-border bank loans dropped and the monetary authorities of the United States, Euro Area, the United Kingdom, and Japan adopted “unconventional” monetary policy. These policies, which included credit easing, quantitative easing (QE),6 forward guidance, and signaling pushed global liquidity to new peaks (see figure 1). Initiated with a view to prop up asset prices and keep their respective economic and financial systems well-oiled, these policies had two immediate impacts. First, it expanded these four central banks’ balance sheets to a mammoth $16 trillion (or close to 20 percent of world GDP).7 Second, this unprecedented volume of funds soon made its way into the bond markets of emerging economies due to a combination of factors, such as their improving growth prospects, rising interest rate differentials, and low-risk premium for debt securities. 8

Issuance of debt securities by the residence of issuer increased in double digits in emerging economies (at pre-crisis levels) between 2010 and 2014; after a brief hiatus amid fears over Fed tapering and asset bubbles, the pace of issuances again picked up post 2016.9 In contrast, debt issuances grew only marginally in advanced economies. 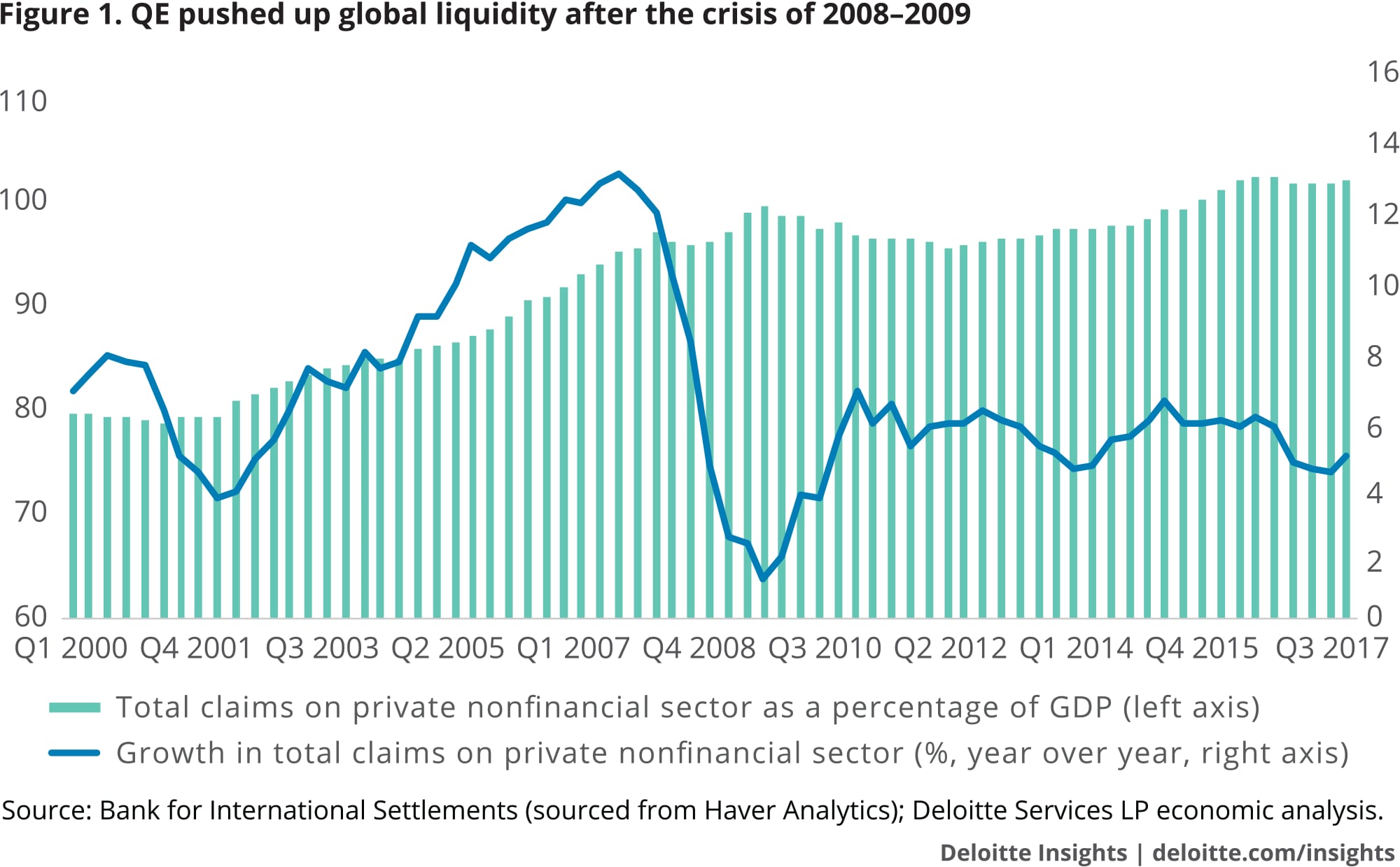 What happens when the tap is turned off?

For those skeptical about any impact of the shrinking balance sheets of advanced economies’ central banks on emerging economies, a quick recap of events in 2013 can serve as a good reminder. That year, as the then chairman Ben Bernanke announced a possible cut to the Fed’s asset purchases, yields in the United States shot up. The resulting lessening of interest rate differentials with the United States caused sharp capital outflows and currency depreciation in many emerging economies. The same fears, albeit in different degrees, are apt to be still relevant today. 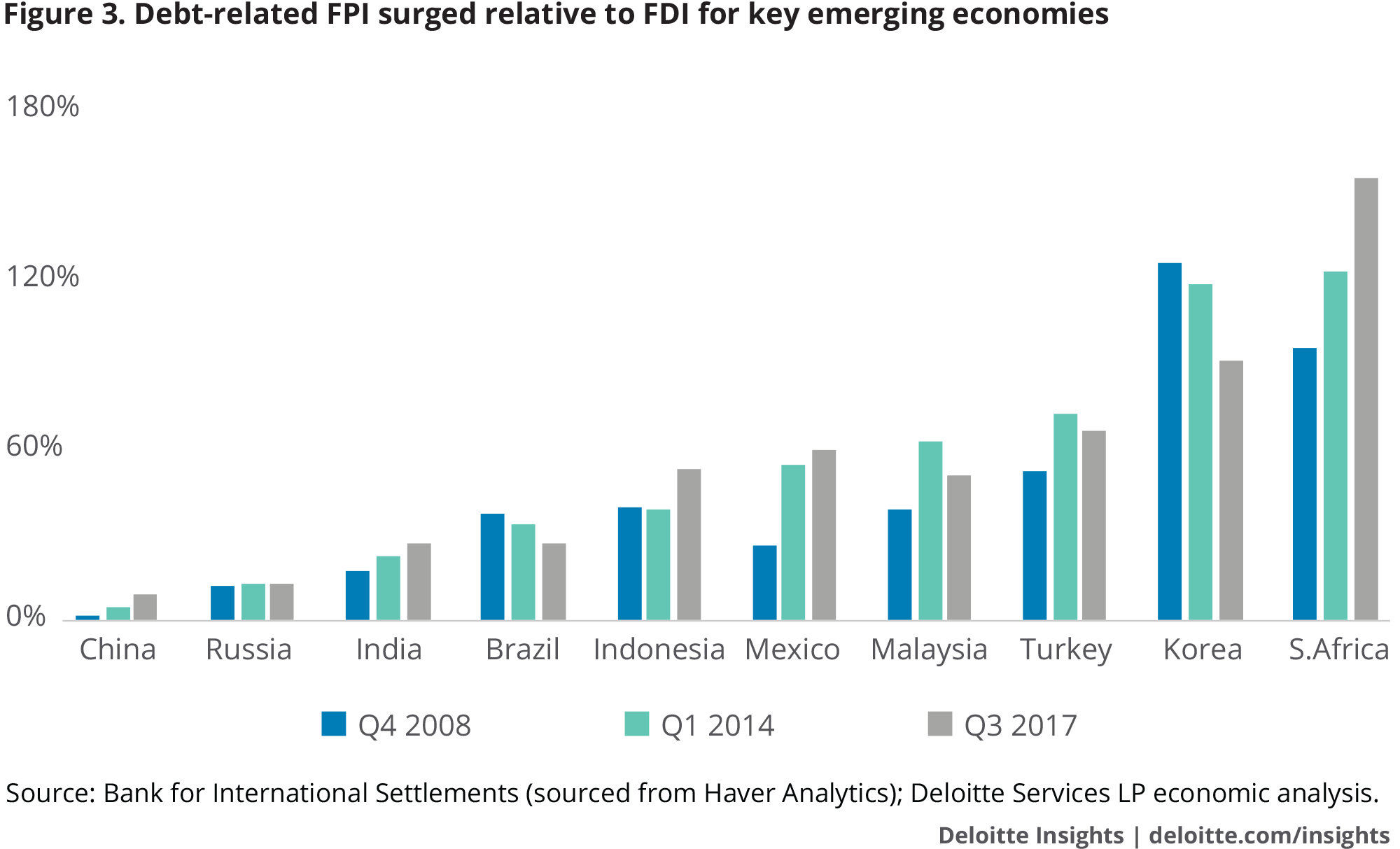 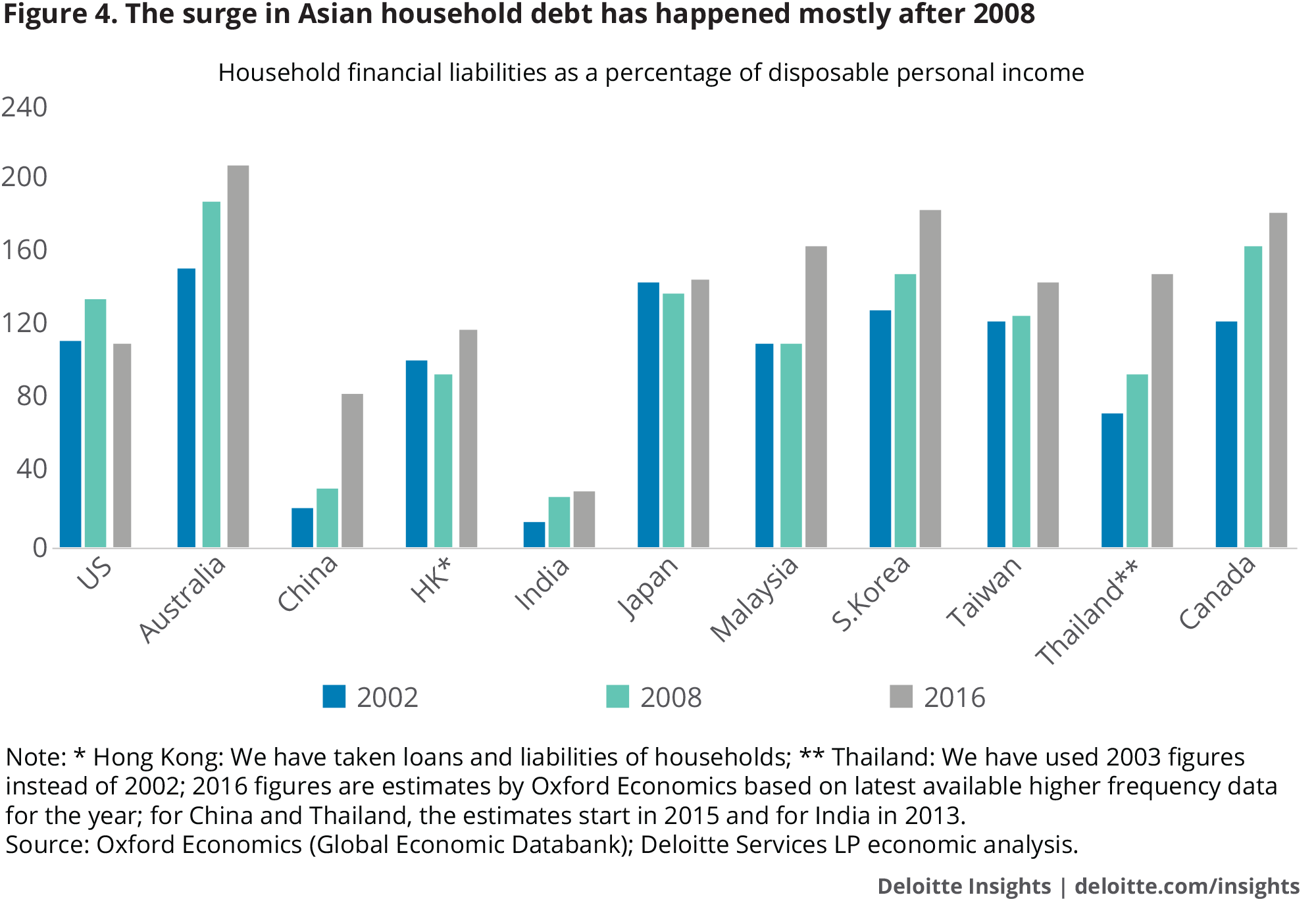 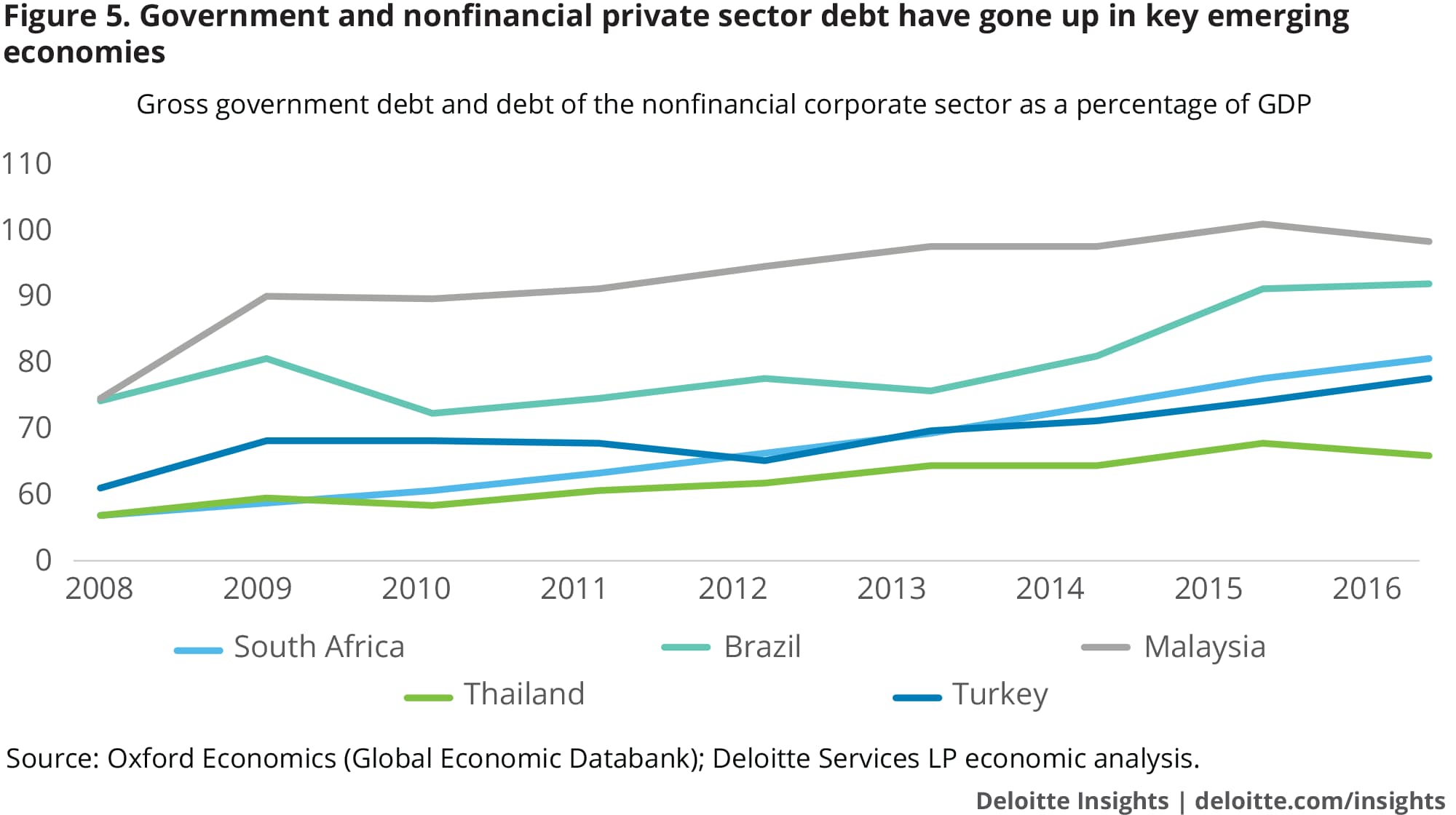 In India, for example, the ratio of liabilities of the nonfinancial corporate sector to nominal GDP went up from 74.4 percent in 2008 to 90.3 percent in 2012 before moderating a little by 2016.13 In Turkey, the ratio more than doubled between 2008 and 2016.14 Rising debt servicing cost in these countries will likely impact input costs and prices, impairing investment prospects and business sentiments.

On the fiscal side, higher debt servicing cost could be harmful for countries desperate to get their public finances in order (such as Brazil). Pressure on the fiscal side, in the absence of counterbalancing measures, could also mean impacts on sovereign ratings, leading to a further hike in borrowing costs. 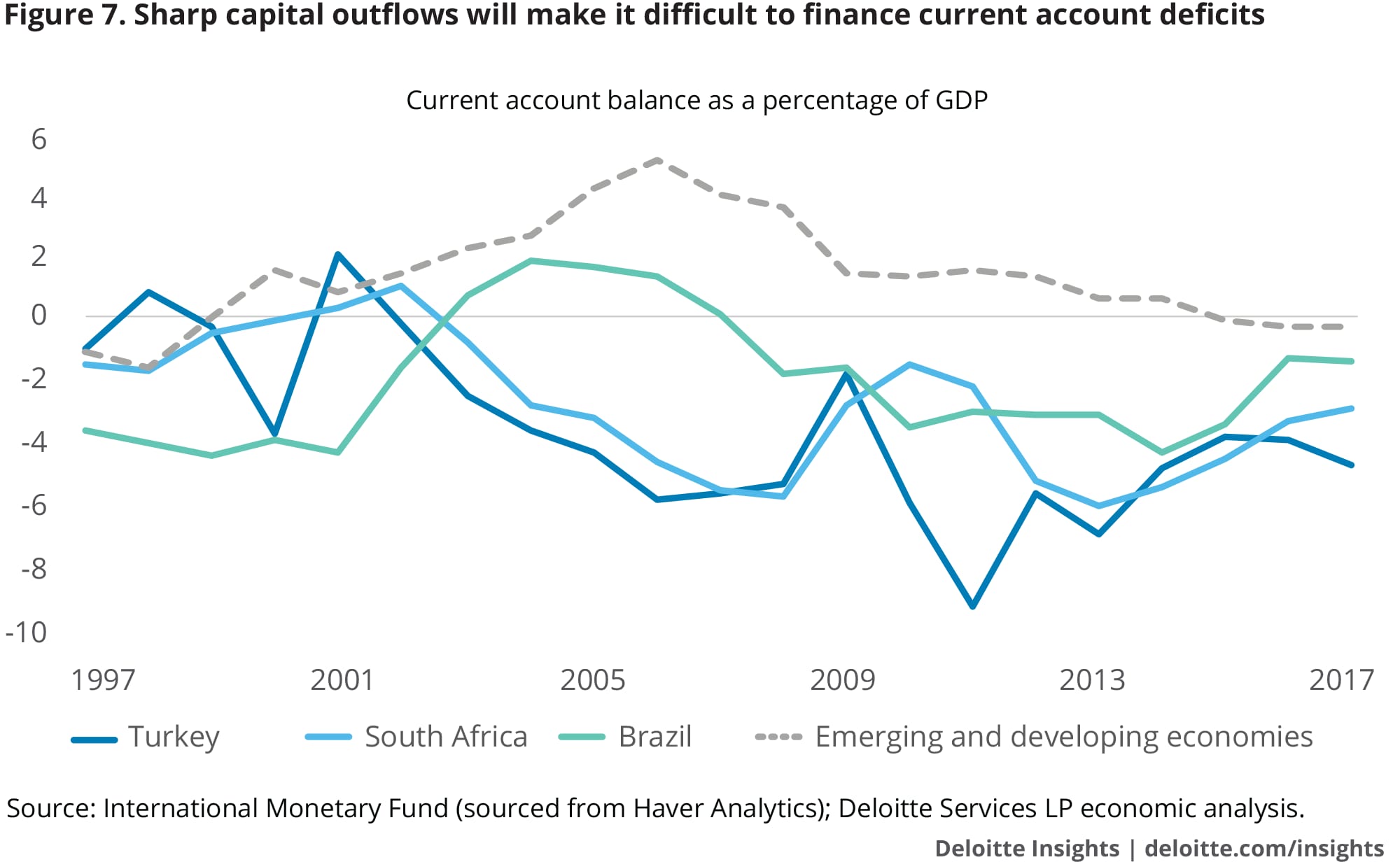 The possibility of any crisis linked to capital outflows brings out comparisons with the Asian financial crisis and Russian crisis of the late 1990s. The comparison, however, is likely unwarranted despite risks. Compared to the 1990s, emerging economies today, for example, hold nearly five to ten times more foreign exchange reserves, giving them substantial resources to protect their currencies. Lower levels of external debt and external debt servicing compared to the late 1990s also bolster the countries’ standing (see figure 8). Furthermore, the banking systems of most major emerging economies are more robust today and more prudent to withstand shocks than in previous crises such as the Asian financial crisis caused by capital outflows. 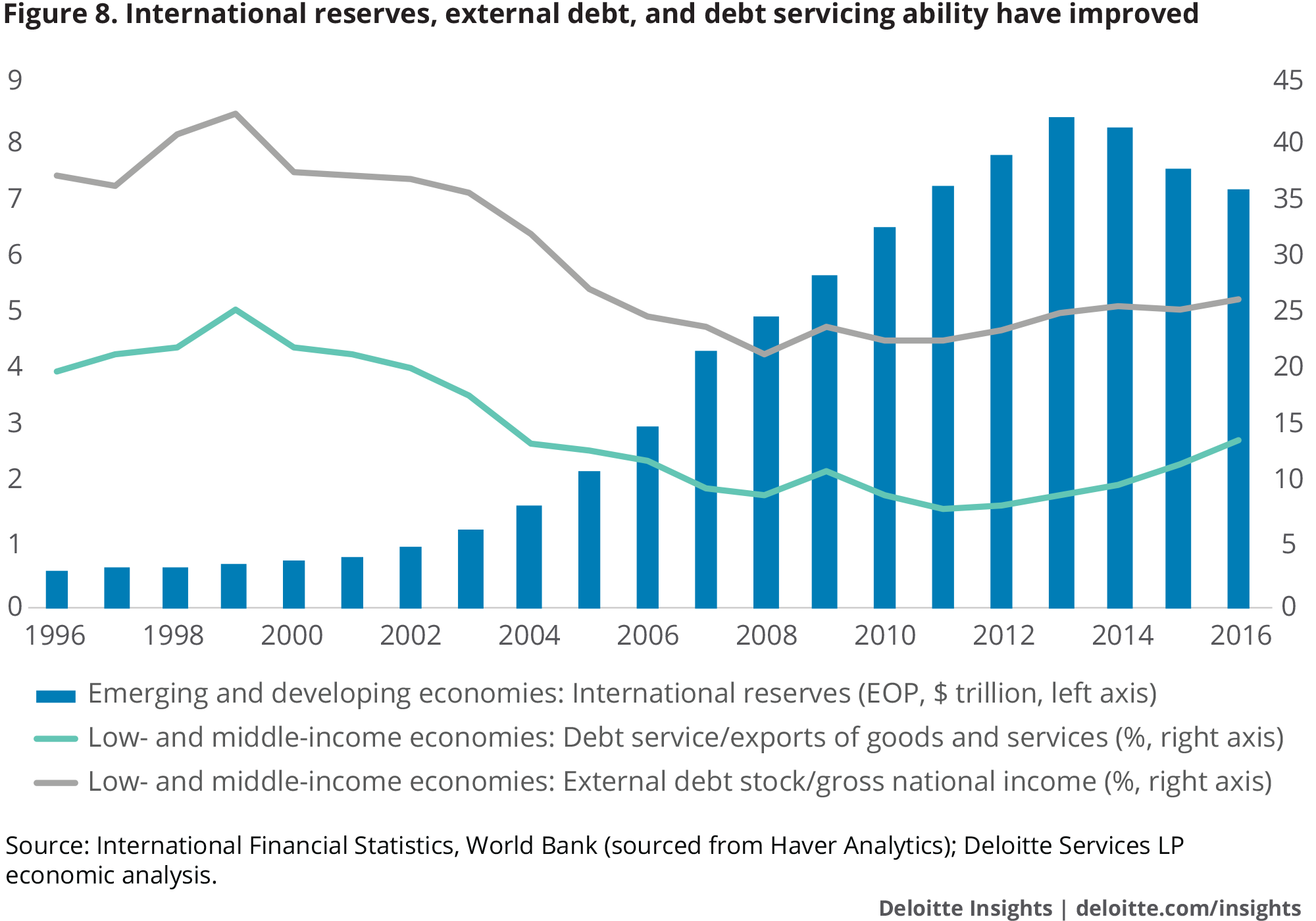 Most importantly, long-term prospects for emerging economies remain attractive, as growth rates are expected to exceed those of the United States and other major developed economies. The International Monetary Fund expects average growth in emerging and developing economies (5.0 percent per year) to outpace corresponding growth in advanced economies (1.8 percent) between 2018 and 2022.15 Besides, the recent economic strength in a few advanced economies, without being accompanied by increased productivity and workforce, doesn’t seem to garner much confidence among investors about the sustainability of the recovery.

While recent memories of the vulnerability in emerging economies post the US Fed’s “taper tantrum”16 in 2013 might be worrying, one cannot deny that the episode played an important role in correcting the very economic fundamentals that whirled these emerging economies into a roller coaster ride. The influx of foreign capital contributing to asset bubbles has already been recognized in many key emerging markets and policymakers are vigilant. For example, the link between foreign capital, low interest rates, household debt, and real estate, which poses risks for key Asian economies, has been identified by countries such as Singapore, Malaysia, and China (including Hong Kong).17 In turn, they have put curbs on both foreign and domestic funds for such assets.

Of course, risks in the financial system won’t just disappear, but keeping an eye on all possible risks, volatility in emerging economies is expected to be short-lived as advanced economies close the liquidity tap. Funds will likely continue to flow in the medium term despite low global liquidity—rather, these economies might witness a shift in the capital composition, thereby improving the quality of capital that flows in.

Dr. Rumki Majumdar is a manager and economist at Deloitte Services LP. She is located in Bengaluru.

Akrur Barua, Deloitte Services India Pvt. Ltd., is an economist with the Research & Eminence team. He is located in Mumbai.

Are emerging economies prepared as the global liquidity tap turns off? has been saved

Are emerging economies prepared as the global liquidity tap turns off? has been removed

An Article Titled Are emerging economies prepared as the global liquidity tap turns off? already exists in Saved items