The cash paradox: How cash levels can affect corporate behavior has been saved

The cash paradox: How cash levels can affect corporate behavior has been removed

The cash paradox: How cash levels can affect corporate behavior

In the coming years, companies should consider finding a way to thrive in a new economic reality characterized by below-average growth conditions and shorter, but more volatile, economic cycles. In such conditions, pursuing growth opportunities may be less about earnings-per-share enhancement and more about long-term prospects.

During the financial crisis, many CFOs served their companies well with financial prudence and by accumulating cash. Now that many companies are refocused on growth, market commentators frequently cite these record cash figures as a key indicator that capital expenditure () and M&A activities can increase and accelerate expansion. But the truth of the matter is far more nuanced.

According to a recent analysis by Deloitte LLP (see “The Cash Paradox: How Record Cash Reserves Are Influencing Corporate Behavior”*), there is an uneven distribution of those cash levels. While at the end of 2013 the S&P Global 1,200 public nonfinancial companies held $3.53 trillion in cash reserves,1,2 just 32 percent of the companies held 81 percent of the cash reserves (see figure 1).3 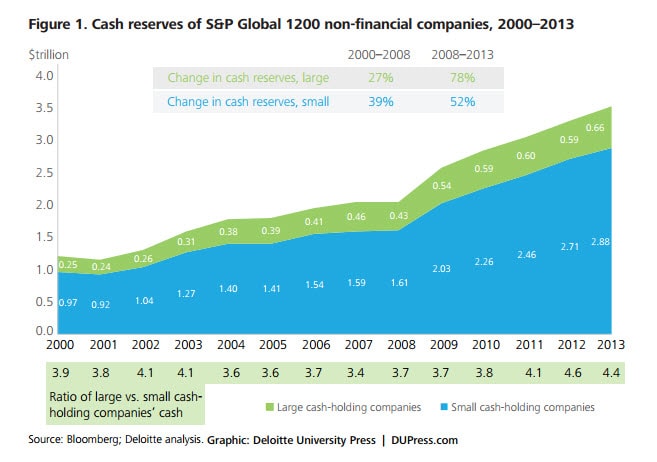 Moreover, these “large ” companies tend to be more conservative in their spending habits compared with their “small cash-holding” counterparts, which have been spending more aggressively in the pursuit of growth and appear to be reaping the benefits.4 The analysis also shows a clear divergence in revenue growth, as well as in share-price performance for these two sets of companies: on both measures, the small cash-holding companies are outperforming their large counterparts.5

While it is important to note that the terms “large” or “small” cash-holding companies do not imply that they are also large or small by market capitalization, there are lessons in the research for companies of all sizes. And in this issue of CFO Insights, we’ll discuss the findings and their potential implications for corporate cash strategies.

Behind the record buildups

Corporate-sector leverage, aided by a vibrant financial sector, helped fuel the precrisis boom. The subsequent shift of debt from the corporate and financial sector to the government following the high-profile government-led bailouts is one of the defining consequences of the financial . Since 2009, though, the corporate sector, particularly in the United States and Europe, managed to successfully deleverage through a combination of rigorous cost-optimization programs and divestments of noncore assets.6

But cash levels have not typically followed the Pareto Principle, also known as the 80/20 rule—the phenomenon whereby the greatest impact (typically 80 percent) is attributable to the vital few (generally 20 percent). According to Deloitte’s research, at the height of the precrisis boom in 2007, the large companies held $1.59 trillion in cash reserves compared with the $462 billion in cash reserves held by small cash-holding companies, a ratio of 3:1. 8 But when the financial downturn hit in late 2008, caution set in, and many companies started to curtail spending and accumulate cash instead.

Surprisingly, the large companies tended to be far more conservative than small cash-holding companies. Between 2008 and 2013, they nearly doubled their cash reserves, from $1.61 trillion to $2.88 trillion, and at the same time, the small cash-holding companies kept accumulating at an even pace and increased their reserves, from $433 billion to $656 billion. By 2013, the ratio of cash reserves became 4:1 in favor of large companies.9 While financial prudence was generally welcomed by the markets in those tough years, such aggressive cash hoarding by these large companies remains unprecedented.

The divergent attitudes toward cash accumulation and spending gain more context when the relative performances of both sets of companies are considered. Both sets of companies grew their revenues at a consistent pace since 2000, but there was a clear divergence after the financial downturn, when the small cash-holding companies grew revenues at a faster pace than their larger counterparts. In part, this can be attributed to M&A activities. 15

At the same time, a divergence in share price between the cash hoarders and the spenders has also emerged (see Figure 2). Since 2000, the share price performance of the small cash-holding companies has outperformed their large counterparts, growing by an astonishing 632 percent compared to 327 percent for their larger cash-holding counterparts. Remarkably, the gap widened even more after the financial downturn. This suggests in the long run, the markets are rewarding companies that take a attitude toward growth.16 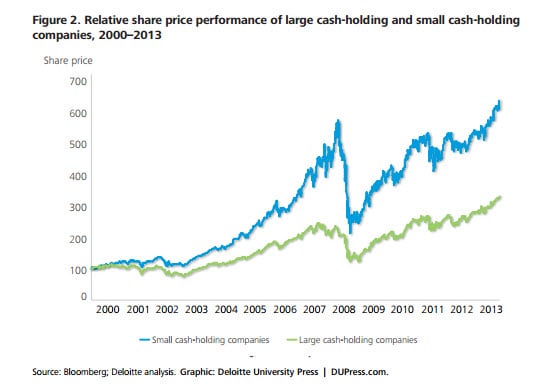 In the coming years, companies should consider finding a way to thrive in a new economic reality characterized by below-average growth conditions and shorter, but more volatile, economic cycles. In such conditions, pursuing growth opportunities may be less about earnings-per-share enhancement and more about long-term prospects. Therefore, in pursuing opportunities, corporate leaders, including CFOs, may want to make a combined assessment of their company’s relative strategic capability, which can indicate its ability to capture growth, as well as its financial strength, which may reveal its ability to fund future growth opportunities. And they should keep the lessons of the research in mind: whereas financial conservatism served companies well during the downturn, in times of economic recovery it could be a double-edged sword, dragging companies into a cycle of cash accumulation at the expense of investing in growth.

The CFO Program brings together a multidisciplinary team of Deloitte leaders and subject matter specialists to help CFOs stay ahead in the face of growing challenges and demands. The Program harnesses our organization’s broad capabilities to deliver forward thinking and fresh insights for every stage of a CFO’s career–helping CFOs manage the complexities of their roles, tackle their company’s most compelling challenges, and adapt to strategic shifts in the market.

For more information about Deloitte’s CFO Program, visit our website at: www.deloitte.com/us/thecfoprogram.