COVID-19’s impact on US income inequality: It’s going to get worse before it gets better

COVID-19’s impact on US income inequality: It’s going to get worse before it gets better Issues by the Numbers, July 2020

With Blacks and Hispanics disproportionately employed in low-paying occupations, which are likelier to have been disrupted by COVID-19 and generally suffer more job losses during recessions, the income divide in the United States will likely rise.

In the United States, minority groups have disproportionately suffered from COVID-19’s health impacts, as many of the health factors that put people at greater risk from the disease (such as diabetes, heart disease, and obesity) are more prevalent in minority communities.1 Further, socioeconomic factors such as poverty and lower rates of private health insurance point to a reduced ability among many minorities to cope with the pandemic’s health impacts. Poverty rates among Black Americans (20.8%) and Hispanics (17.6%) are higher than among non-Hispanic whites (8.1%).2 And in 2018, 74.8% of non-Hispanic whites had private health insurance, while only 55.4% of Blacks and 49.6% of Hispanics had private health insurance.3

The unique nature of the current recession4 has increased the odds that these existing disparities in income and wealth will be exacerbated because of differentials in occupational employment among US racial groups. Blacks and Hispanics are disproportionately employed in low-paying occupations,5 and we have found in earlier research that low-paying jobs are often shed more quickly in a recession.6 In addition, Blacks and Hispanics are more likely than non-Hispanic whites to work in occupations that have been disrupted by shutdowns imposed to slow the spread of the disease. The likely outcome of this combination could be an increase in income inequality that is borne in large part by minority communities. But until we see how this recession plays out and the nature of the eventual recovery, we will not know if this rise in inequality will be a temporary blip or a slide onto a longer negative trajectory.

It starts with an uneven playing field

Income and wealth inequality in the United States has been on the rise since the early 1970s,7 and even prior to the pandemic it showed no sign of abating. In the past 30 years, the proportion of wealth held by those in the top 10% of household income has risen from 60.8% to 70.0%. But even more remarkably, the wealth owned by just the top 1% of income earners has gone up from 17.2% to 26.0%8—meaning that more than a quarter of the country’s wealth is in the hands of the top 1% (figure 1). 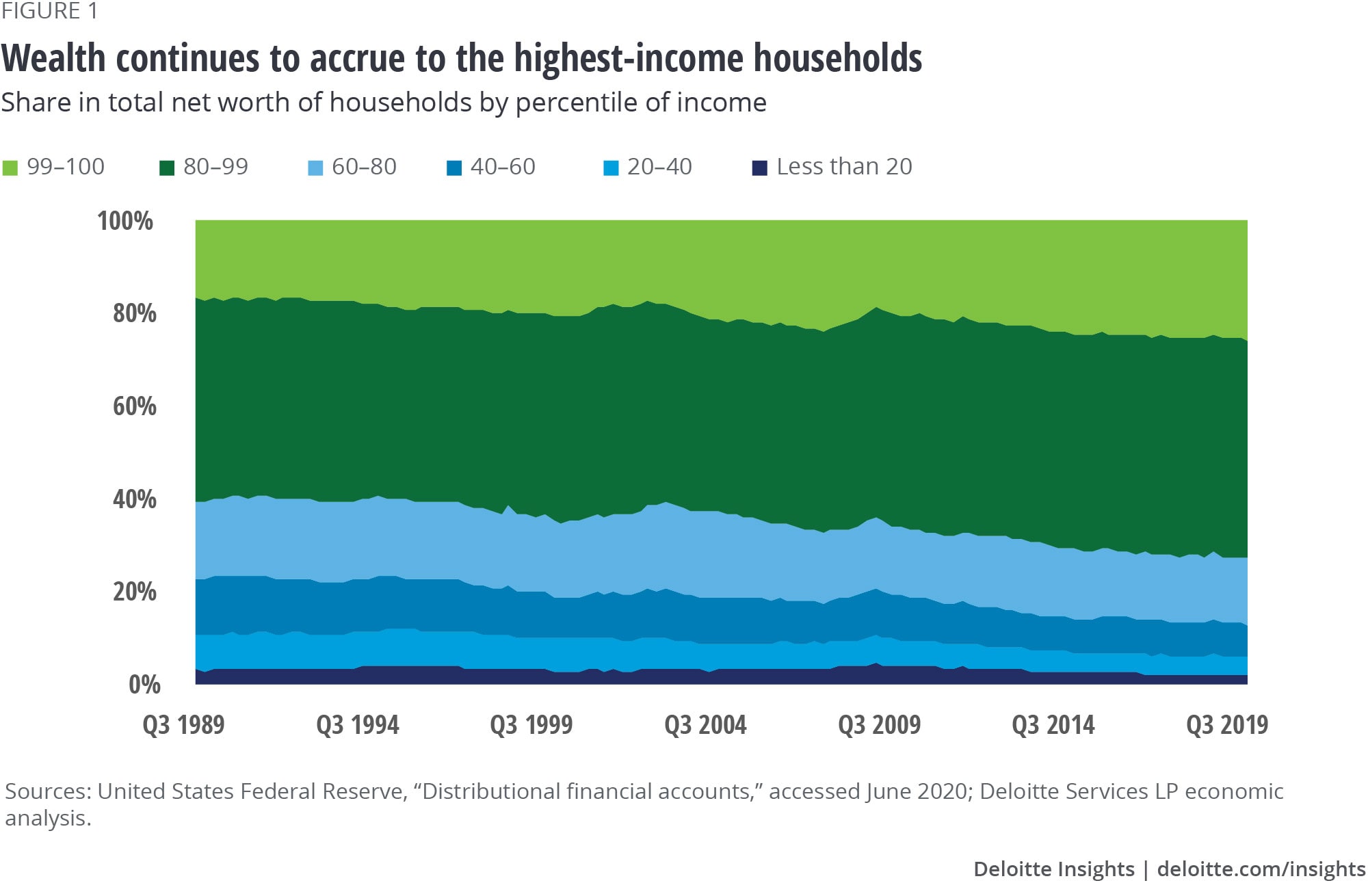 There are also significant income disparities between races and ethnic groups. Between 1989 and 2019, household incomes for Black families averaged 63% of that of non-Hispanic white families, while Hispanic families averaged 72% of non-Hispanic white families’ income, with these percentages remaining relatively stable.9 And inequality does not exist only between different racial or ethnic groups; over time, it has gone up within these groups as well. Figure 2 shows a different measure of income inequality: the ratio of real median household income to real mean household income (when inequality rises, the mean income rises faster than the median). As figure 2 shows, this ratio for each racial and ethnic group shows a broad downward trend, indicating rising inequality within each group, although Black-headed households did have a period of stability in the mid-1990s to early 2000s.10 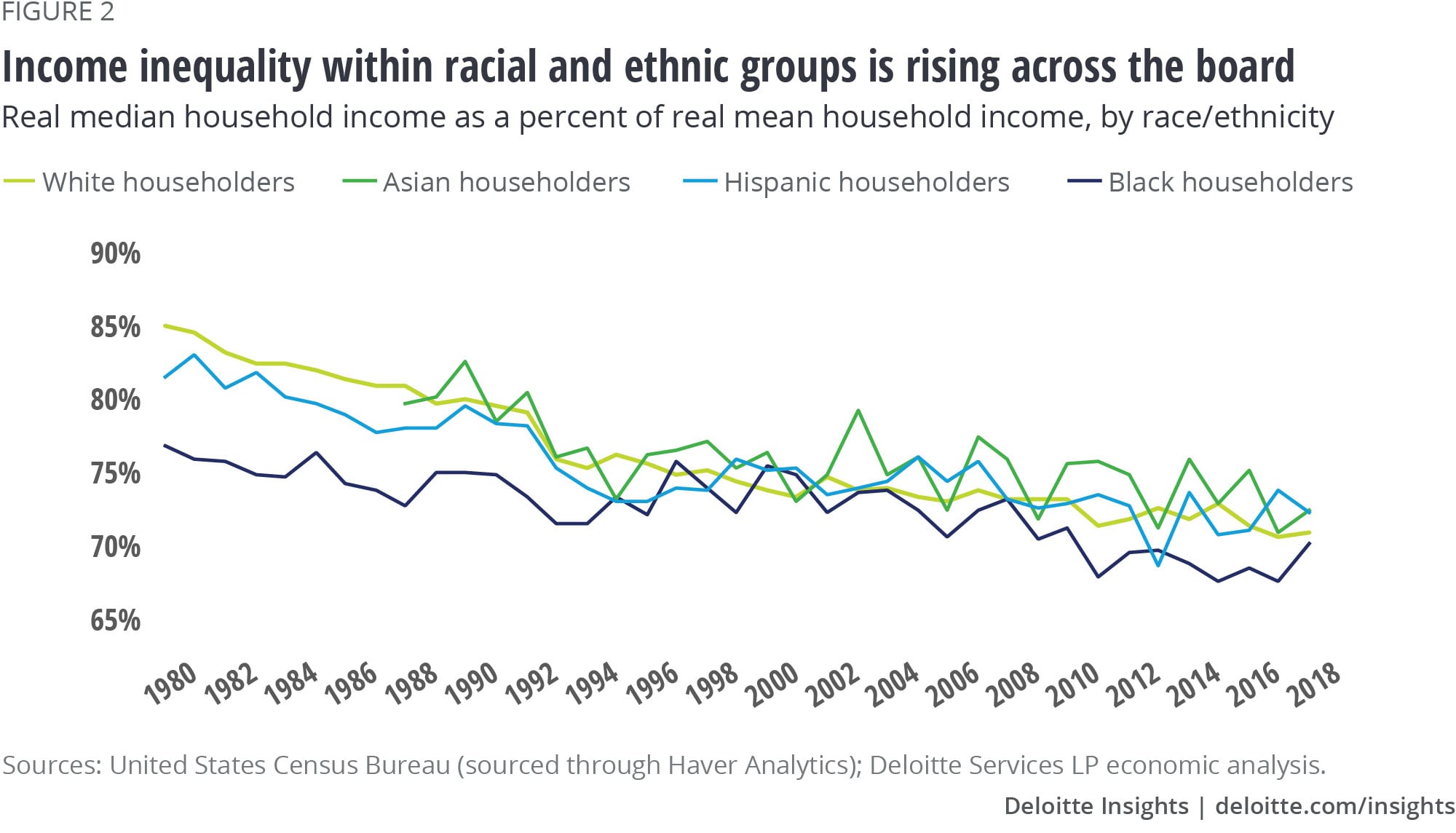 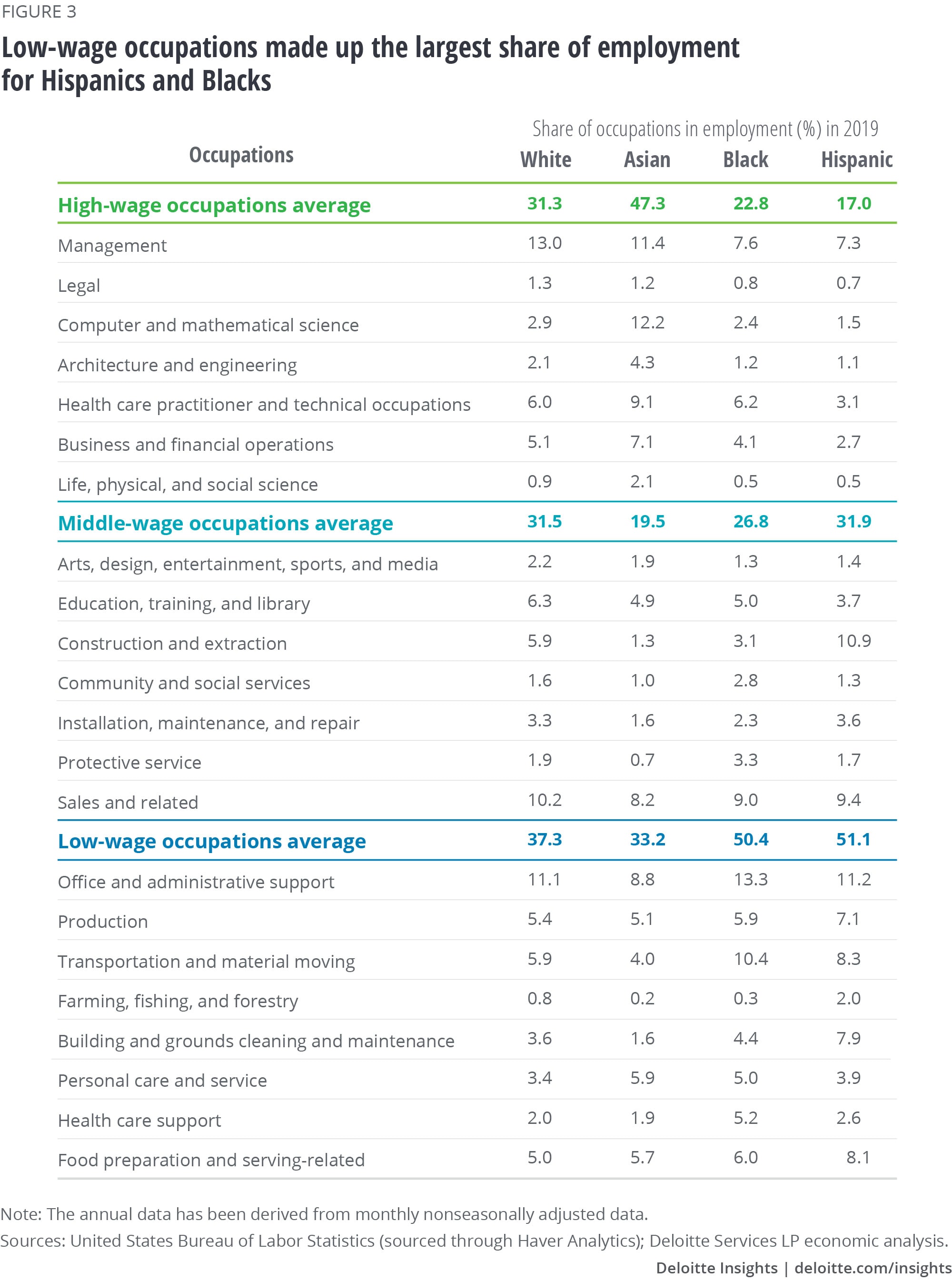 Recessions tend to make the situation worse. The real median income for Black-headed households fell by 10% during 2007–2010—a period that covered the previous recession. This figure is higher than that for households where the head of the household was Asian (-7.6%), Hispanic (-7.5%), or white (-5.7%).15 As figure 4 shows, households with a white head fared better than those with Asian, Black, or Hispanic heads in the 2001–2002 recession as well. Moreover, economic recoveries don’t necessarily make things better. For example, in the economic expansion between 2010 and 2018,16 the gains in real median household income for Black householders were lower than the gains for householders in the other three racial groups. During 2001–2018—a period that includes two business cycles—the real median income of Black-headed households decreased from 66.2% to 61.8% of the median income of white-headed households. 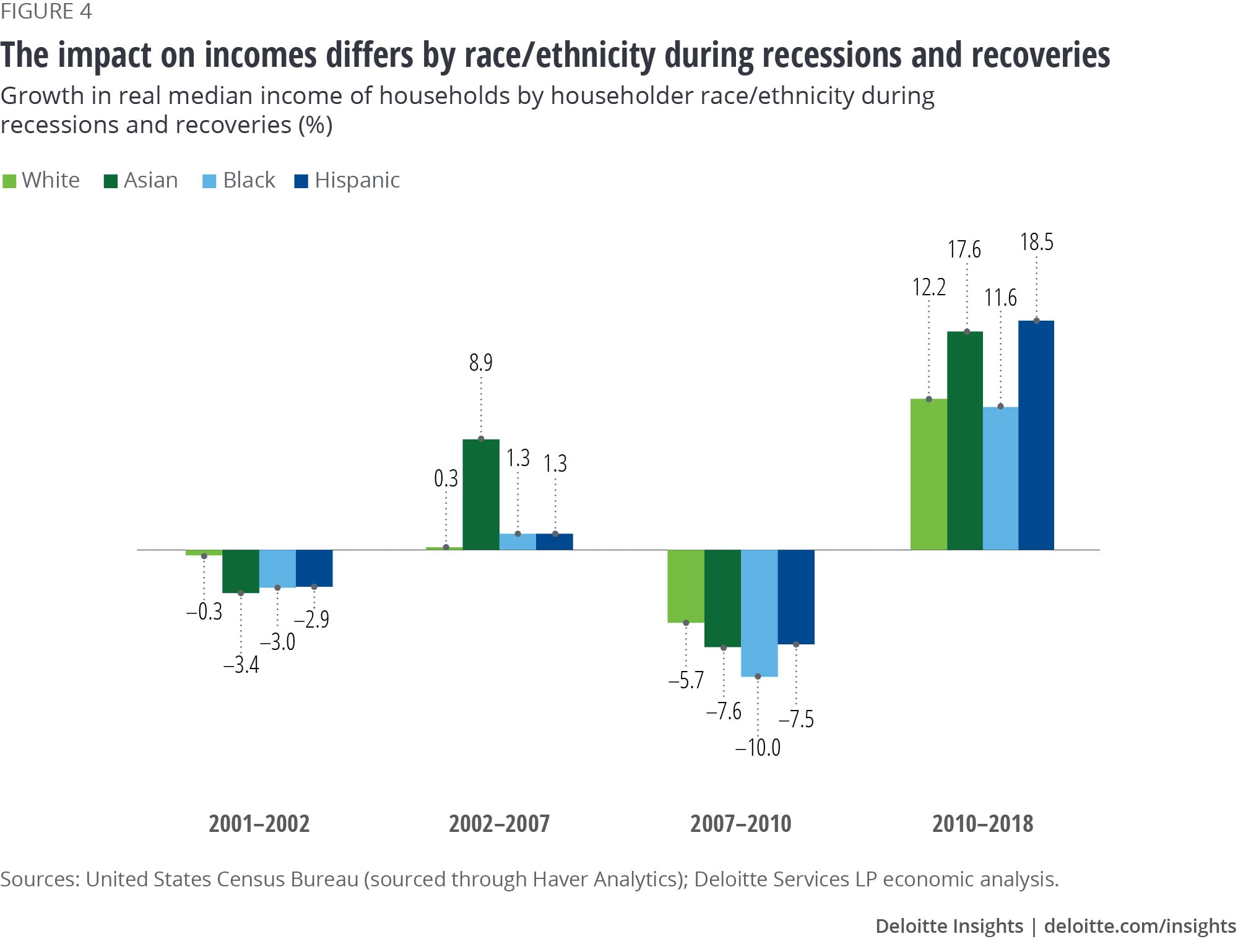 Rising income inequality during recessions is a direct consequence of worsening labor market conditions during a downturn, which again tends to affect some races more than others. Seasonally adjusted data on employment by race and ethnicity reveals that among Blacks, employment fell by 5.9% between December 2007 to June 2009, which was higher than the employment contraction for other races (-3.4% for Asians, -4.1% for whites, and -4.5% for Hispanics).17 Such disparities in labor market impact among racial groups are also evident from data during the recession of March 2001–November 2001, as well as in the current downturn (figure 5). Figure 5 also shows that Hispanics have suffered a greater percentage of job losses than other groups during the ongoing downturn this year. 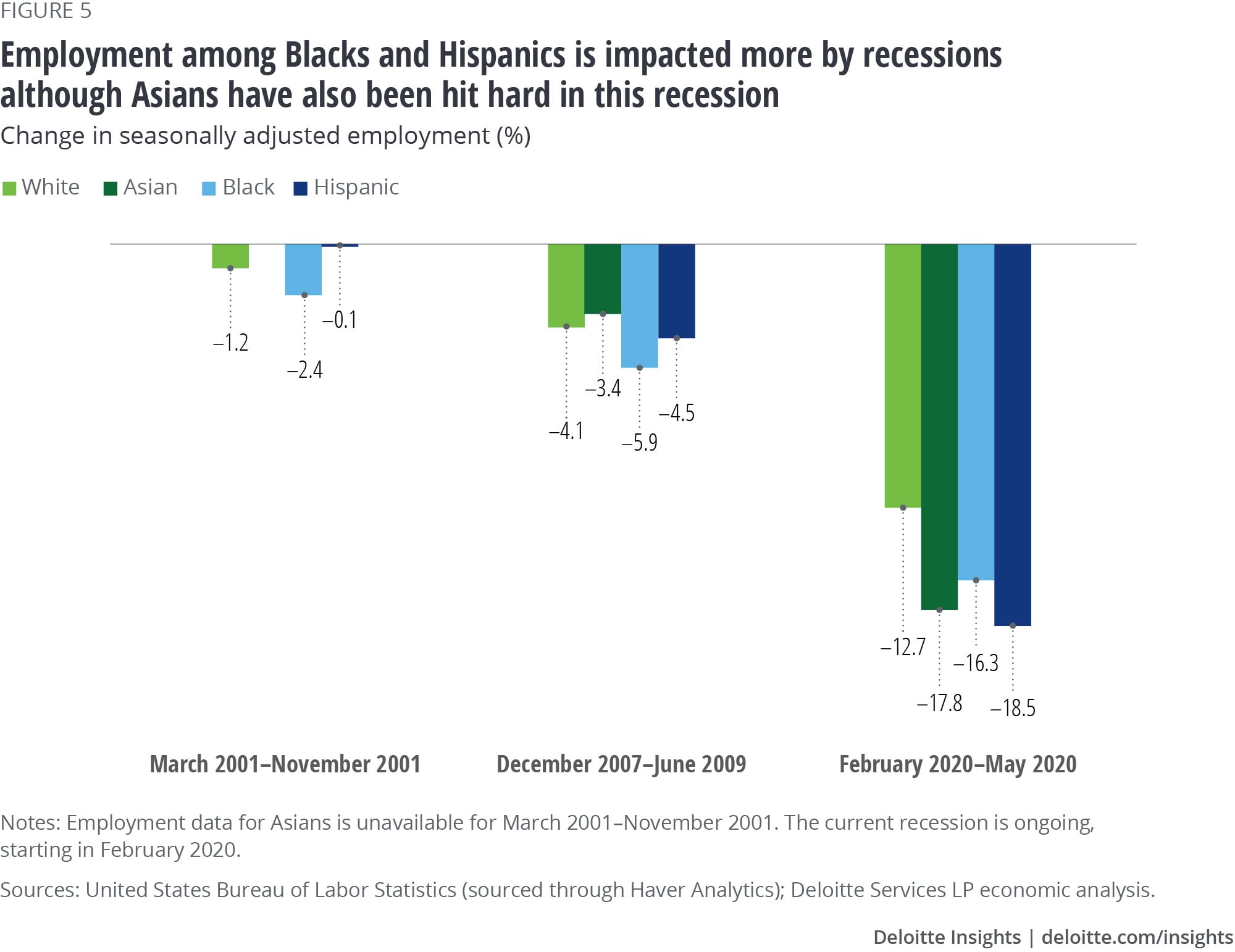 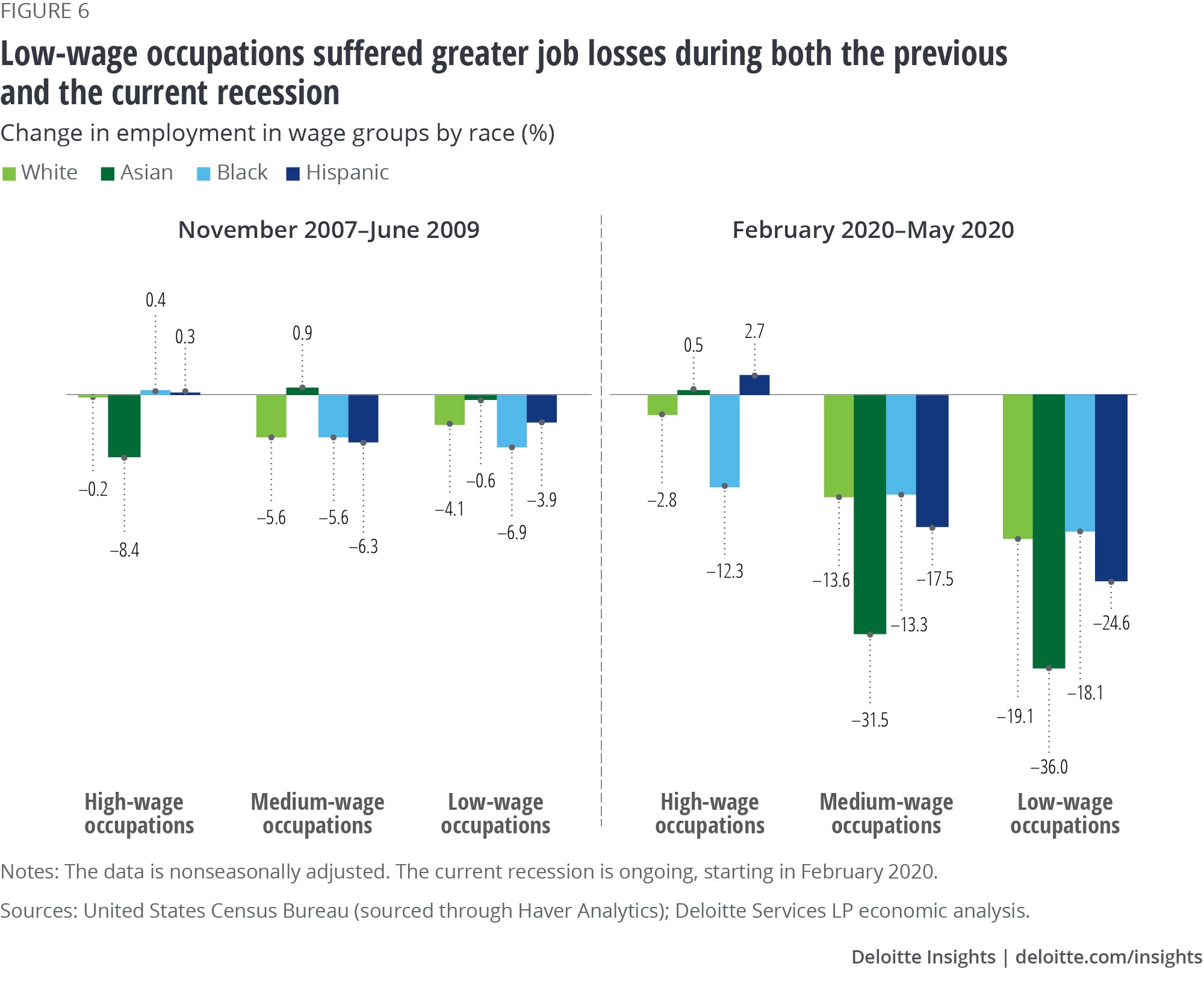 Black workers may have yet another employment trend in the current downturn to worry about. While individuals employed in high-wage occupations appear to be relatively better off during recessions, this time around, employment in high-wage occupations among Blacks has contracted by 12.3% to date, far worse than the 2.8% decline in this category for whites and the slight gains in employment among Hispanics and Asians.

A more granular look at employment within high-, medium-, and low-wage occupations reveals the extent of the damage to equitable income distribution this downturn is likely to cause. The people likely to suffer most, both economically and health-wise, during the ongoing recession are those who are engaged in occupations where the ability to socially distance from customers and from each other is extremely low. For example, those employed in food preparation and serving-related occupations have suffered greatly, as lockdowns and slow reopenings (with the continued need for social distancing) have led to a sharp drop in business for restaurants. Those employed in personal care and service-related occupations have also been disproportionately affected due to demand and supply shocks in tourism, entertainment, and personal care. Incidentally, the two broad occupational categories mentioned above—food preparation and serving, and personal care and service—are also the two lowest-paid occupations, on average, in the United States. And it is employment in these occupations—and similar lower-wage ones—that have taken the biggest hit. For example, total employment in food preparation and serving occupations fell by 43.3% between February and May, the highest among all 22 major occupations, followed by a 37.3% decline in personal care and service occupations.

Figure 7 shows that employment in these two lowest-paid occupations has fallen sharply for all races, most significantly among Asians, followed by Hispanics and African Americans. Employment in food preparation and serving-related occupations fell by a staggering 53.8% for Asians, 49.4% for Hispanics, 45.4% for Blacks, and 41.6% for whites between February and May. It is interesting to note that in the previous recession, employment in these two occupations largely increased among each race, except for Asians. If we compare employment in specific occupations within the broad low- and medium-wage groups, we find that, other than in construction and production, the loss in employment has been much higher so far in this downturn than in the previous one. Again, the extent and seriousness of the pandemic has meant not only a shock to demand, but also to supply, with many businesses remaining closed or operating at reduced capacity due to social distancing measures. 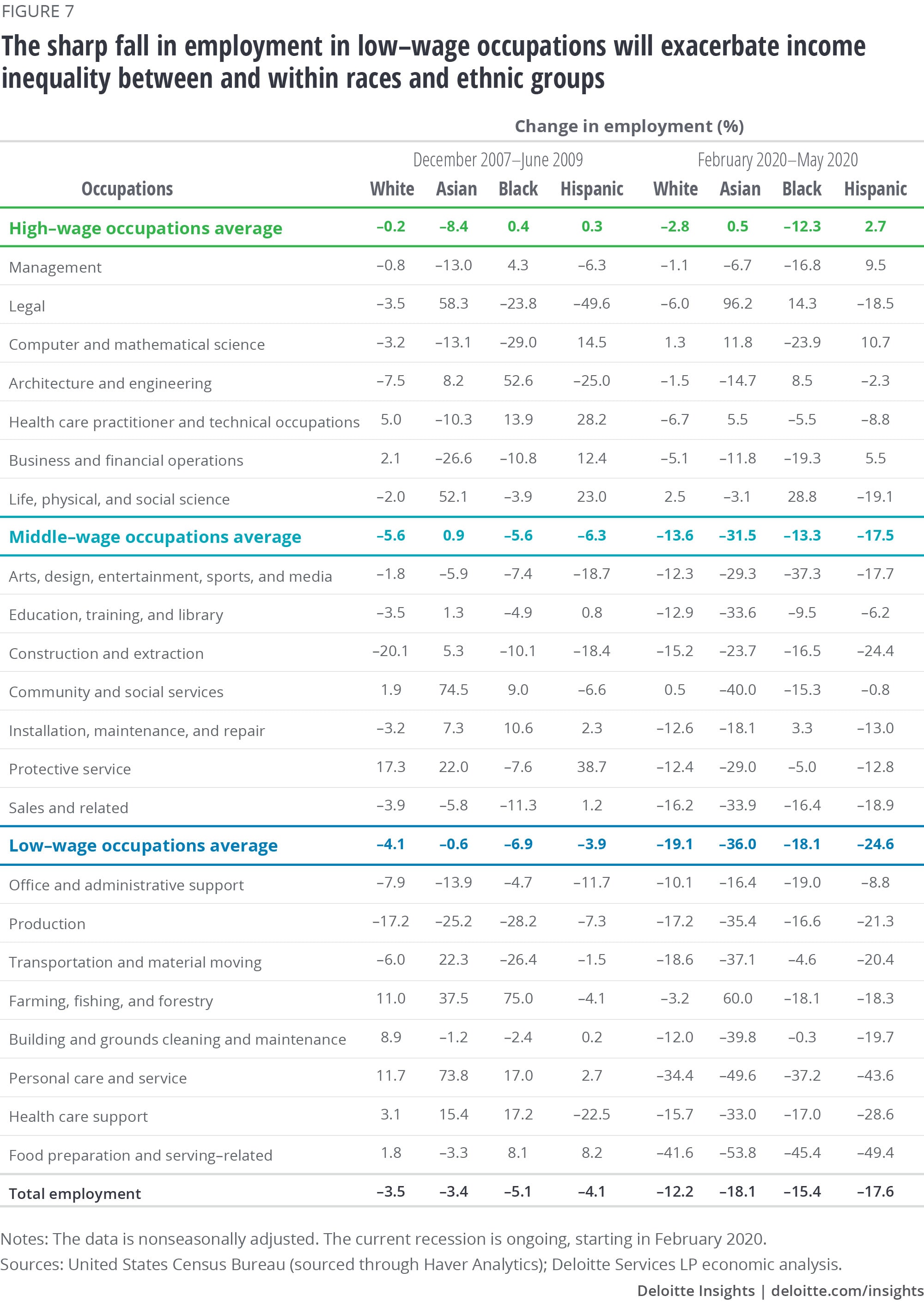 Disparities will continue even as the economy reopens

As the economy reopens, the disparity in employment among occupations is unlikely to disappear. Rather, the “riskiness” of an industry will overwhelmingly determine its path to normalcy. When considering which occupations will face the greatest challenges in reopening, one factor is the extent to which people in these occupations have contact with others, engage in face-to-face discussions, are exposed to disease or infections, or must work in close physical proximity. A recent study, How risky is your industry?,19 ranked the risk of contracting COVID-19 for the 22 specific occupations in our high-, middle- and low-wage groups based on these four criteria; figure 8 shows the results. While the high-wage group includes the occupation with the highest COVID-19 risk—health care practitioner and technical occupations—the other occupations in this group are at fairly low risk. Meanwhile, the middle-wage group has six occupations with a risk ranking of 11 or below (in the highest-risk half of all occupations), while the low-wage one has four. Hispanics (30.6%) and whites (29.2%) have a higher proportion of employment in the “11 or below” risk category in middle-wage occupations; Blacks (25.5%) and Asians (17.6%) are less prevalent in these occupations. For low-wage occupations, the situation is different: Blacks (29.5%) and Hispanics (25.8%) have higher proportional representation in the “11 or under” risk rankings than do whites (21.5%) and Asians (22.3%). 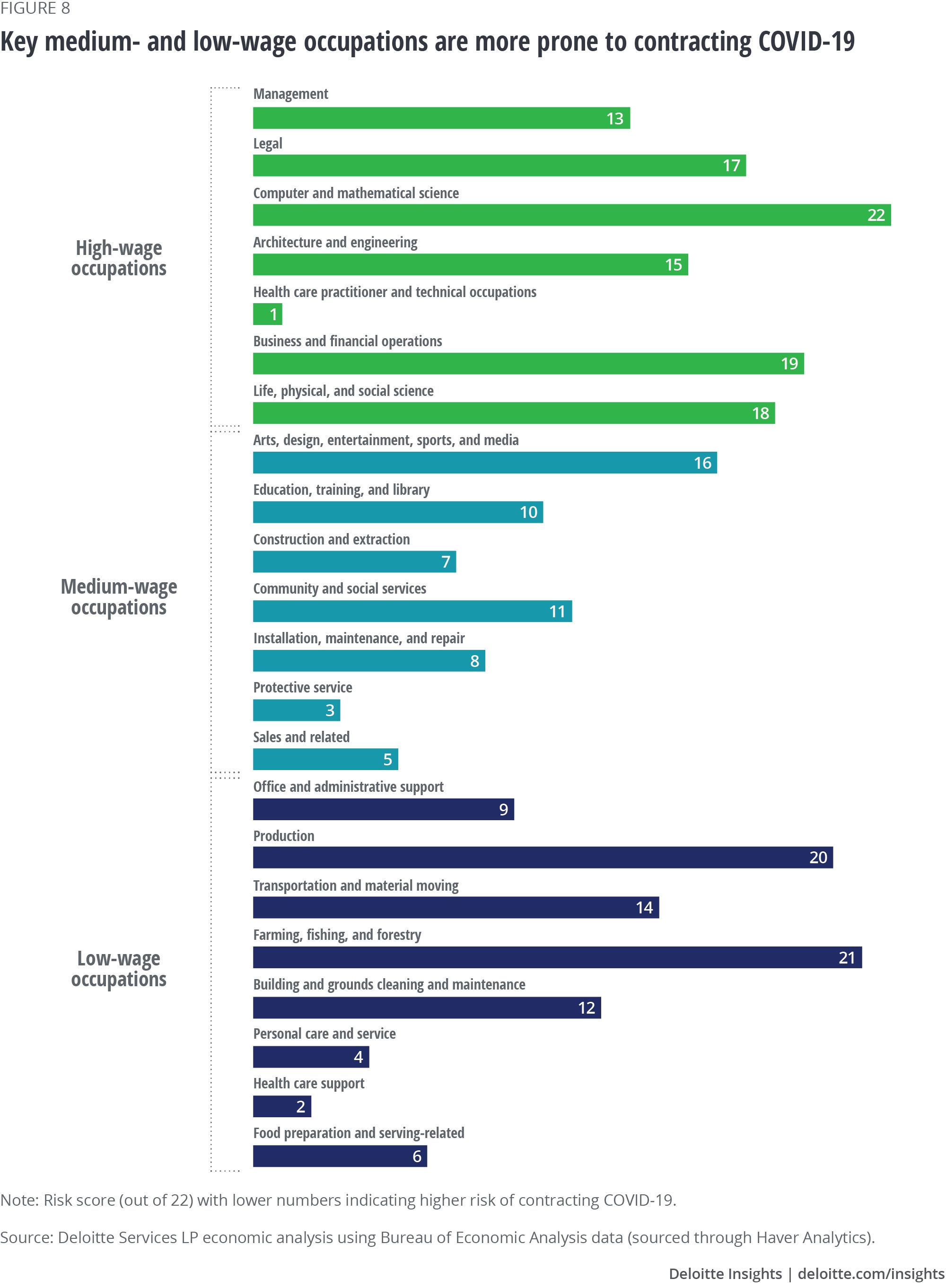 Considering all these factors together, a worsening of income inequality along racial and ethnic lines during the COVID-19 recession is expected. Blacks and Hispanics are overrepresented in occupations that make it difficult to maintain a safe distance from others and therefore present a higher risk of contracting COVID-19 in the workplace. This will play into how employment recovers in these occupations as employers and workers struggle to balance precautionary measures with business needs. Since minorities are also generally overrepresented in low-wage occupations—the very occupations that are hit harder in recessions—this recession will likely impact these minorities far more than their white counterparts. Given the expected severity of the depth and duration of the current recession,20 the increase in income inequality could be potentially large. 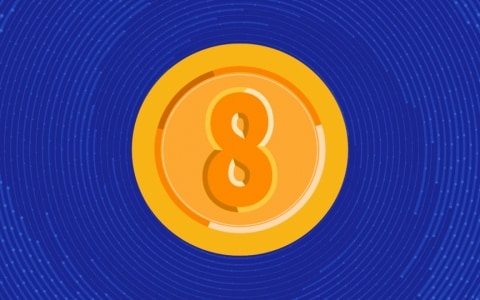 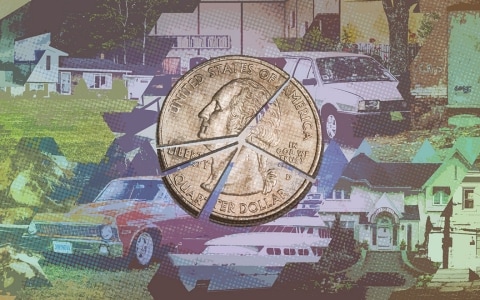 Income inequality in the United States 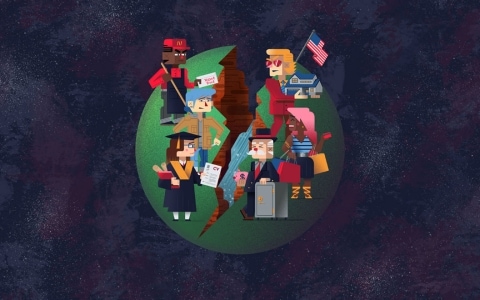 COVID-19’s impact on US income inequality: It’s going to get worse before it gets better has been saved

COVID-19’s impact on US income inequality: It’s going to get worse before it gets better has been removed

An Article Titled COVID-19’s impact on US income inequality: It’s going to get worse before it gets better already exists in Saved items