5G deployment: The chance to lead for a decade has been saved

5G deployment: The chance to lead for a decade has been removed

An Article Titled 5G deployment: The chance to lead for a decade already exists in Saved items

5G deployment: The chance to lead for a decade

5G adoption is a catalyst for broad economic growth

The world’s economy is at another pivotal moment where a key catalyst for growth will be wireless connectivity enabled by 5G deployment. The introduction of 5G technology makes possible the connection and interaction of billions of devices of almost any kind that will impact every element of daily life.

The shift to 5G

First-adopter countries embracing 5G could sustain more than a decade of competitive advantage. Unfortunately, an examination of how the United States compares internationally on investments critical to 5G deployment surfaces a concerning trend. It’s critical that this trend is immediately reversed to help promote US economic competitiveness.

5G: The chance to lead for a decade

The fuel for economic growth

Countries that were first to adopt prior generations of wireless technology, such as the United States in 4G/LTE, were also rewarded with broader macroeconomic benefits. But 5G offers the potential for an even larger advantage to countries that adopt 5G first. They are expected to experience disproportionate and compounding gains in macroeconomic benefits caused by “network effect.” As devices connect to the 5G network, companies will be able to exploit what The Economist referred to as the “data-network effect” in a 2017 article: “a powerful economic engine… using data to attract more users, who then generate more data, which help to improve services, which attracts more users.”

However, countries such as China, Japan, and South Korea are setting the pace on 5G adoption through the rapid build and aggressive investment, while the United States lags behind. For example, since 2015, China outspent the United States by $24 billion in wireless communications infrastructure and built 350,000 new sites, while the US built fewer than 30,000. The gap is only set to grow. China’s five-year economic plan specifies a further $400 billion in 5G-related investment.

Consequently, China and other countries may be creating a 5G tsunami, making it nearly impossible to catch up. 5G deployment requires a roughly 10-year sustained investment cycle, and countries late to 5G adoption will still need to invest significant time and resources to effectively use the new products and services that it enables. Therefore, the first-adopter benefits will likely extend decades beyond the initial investment. 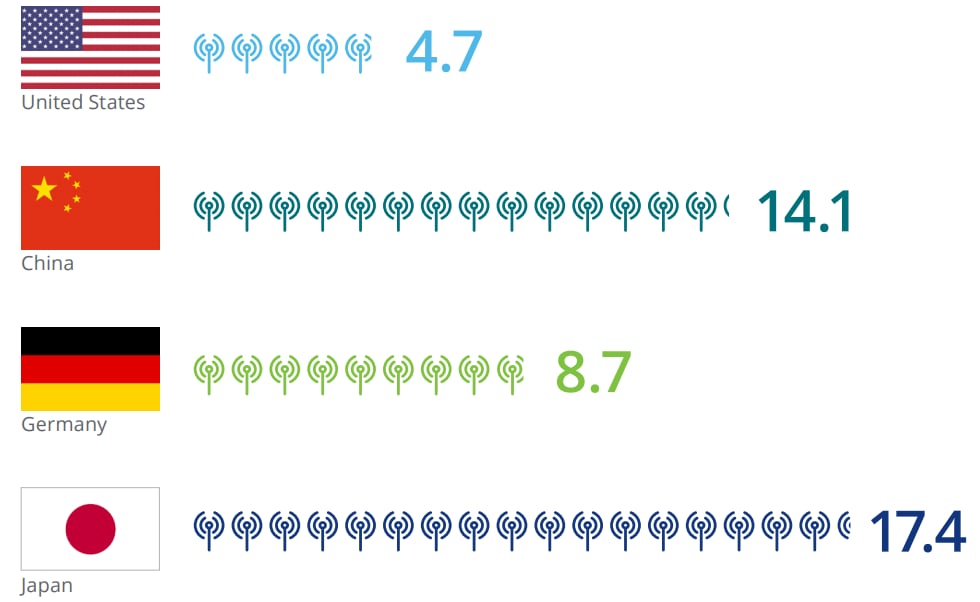 The potential negative consequences of a protracted 5G deployment could take decades to overcome, and other countries are already making their moves. Policy makers, carriers, and industries with the most at stake should move now to help streamline policies and processes and collaborate with ecosystem players to help create efficient solutions to investment barriers.

Deloitte expects that 5G deployment will be a catalyst for broad economic growth but adopting the new technology presents an international challenge. Addressing this challenge demands both private sector and government solutions to radically reduce the time for small cell deployment. One key element, a national communications infrastructure database, could be created to allow both the private sector and public sector to identify opportunities to advance our nation’s 5G objectives. The United States led the world in 4G and in the process created thousands of jobs. We simply cannot afford to lose the race to 5G.

Read the full report–5G: The chance to lead for a decade

Jack Fritz is a principal in Deloitte Consulting LLP’s Technology, Media, and Telecommunications (TMT) practice and is a leader of the firm's 5G and Edge Computing practice with over a decade of exper... More