Plotting the course for 5G innovation has been saved

Plotting the course for 5G innovation has been removed

Plotting the course for 5G innovation

Will 2020 be the year of 5G wireless networks? Many consumers and businesses think so, but we’re also witnessing the first signs of disillusionment. Explore three stages of infrastructure-led 5G innovation, along with 5G infrastructure investment opportunities in the United States, to promote deployment, adoption, and commercialization.

From infrastructure deployment to 5G innovation

Early hype generated by 5G’s potential, coupled with its limited availability at the end of 2019, are understandable reasons for some skepticism. But how ominous are these signs of cynicism? Are 5G application innovation and associated business model development doomed if users don’t experience transformative change as quickly as they expect?

But this expected gap between deployed infrastructure and application innovation shouldn’t be mistaken for a dormant period, as it’s typically marked by experimentation, invention, and investment. Furthermore, governments should note that this period can provide an opportunity to advance national infrastructure policy through the creation of demand signals that help speed up 5G deployment and enable subsequent 5G innovation.

5G in 2020: Plotting a course from invention to innovation

Each generation of wireless technology has had its hallmarks of innovation:

Achieving 5G’s benefits likely will require a multiyear journey. 4G-LTE launched in 2010 and achieved 90 percent coverage of the US population in 2012.1 In the years leading up to 4G-LTE deployment, the US government made spectrum readily available to enable rapid deployment.

Carriers’ infrastructure and spectrum investments were critical to deliver the high-speed wireless capacity needed to satiate consumers’ unquenchable thirst for watching video, uploading user-generated content on social media platforms, and enabling gig-economy services such as ridesharing and meal delivery. Deloitte analysis, however, shows that such transformative services and applications didn’t appear in tandem with the 4G-LTE network. Rather, they were adopted years after 4G-LTE was deployed at scale.

Most of the innovations and business models that depend on nearly ubiquitous 4G-LTE coverage weren’t envisioned at its launch. These infrastructure-led innovations were born from wireless technology advancements that generated ubiquitous coverage, higher speeds, lower costs per bit, and improved reliability.

From 5G invention to 5G innovation

Therefore, the speed at which innovators use the new infrastructure often determines which business model emerges as the winner. Investment and experimentation that spawn invention during and immediately after infrastructure deployment have proven key to achieving first-mover status.

Despite 5G’s relative infancy, we’re witnessing intense levels of investment in trials and alliances for 5G-enabled consumer and enterprise use cases—a situation quite like the early days of 4G-LTE.

The power to innovate during the gap between infrastructure deployment and product adoption is not confined to startups, cloud providers, or application companies. Wireless carriers should be especially well-suited to innovate, given their advanced knowledge of 5G capabilities. Moreover, carriers can use this time to orchestrate partnerships with other ecosystem players. Already, wireless carriers and cloud providers have announced alliances as they position for computing and analytical resources on the network edge.

In 2013, a year after 4G-LTE covered approximately 90 percent of the US population, some consumers and businesses still questioned the merits of fourth-generation wireless technology. Despite immediate improvements in wireless speeds, users eager for infrastructure-led applications had to wait two to three years—until 4G-LTE had been deployed at scale.

We expect a similar time lag for 5G application innovation. 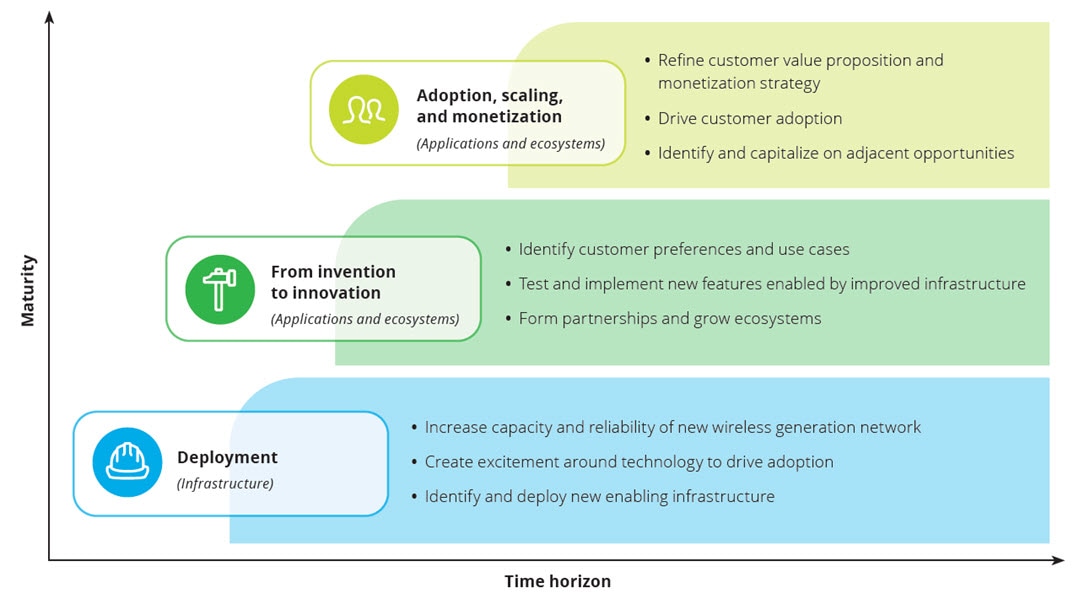 Still, a potential years-long wait for 5G applications doesn’t appear to dampen consumers’ and businesses’ enthusiasm for this transformative technology. In a recent Deloitte US consumer survey, 67 percent of respondents said they are likely to upgrade to a 5G-compatible smartphone when 5G service is available in their area.7 Similarly, 75 percent of the 400+ business executives surveyed in a Deloitte enterprise connectivity study noted that they see advanced connectivity solutions such as 5G as being critical to their business initiatives over the next three years.8

Opportunities to promote US 5G deployment and adoption

Numerous opportunities exist in the United States to make investments to promote further deployment, adoption, and commercialization of 5G architectures. These can include:

Impatience for 5G infrastructure investment should be even more imperative given COVID-19. Accessing health data to help identify those most at risk, optimize treatment center capacity, enable remote testing and diagnosis, and optimize the medical supply chain to replenish essential products from manufacturers could be made simpler and more efficient using 5G.

While it’s uncertain which 5G use cases envisioned today will materialize in the years to come, the one certainty is that 5G can help trigger innovative business models that gain large-scale adoption. In the near term, a more proactive and coordinated stance from the United States to provide demand signals that help existing and new participants gain immediate market traction and scale would likely accelerate deployment—and by doing so, application innovation—in a manner that advances national economic and security objectives.

1, 2 “4G-LTE coverage” based on Deloitte analysis of publicly available company reports of leading US carriers and population data published by the US Census Bureau.

7 Build it and they will embrace it: Consumers are preparing for 5G connectivity in the home and on the go, Deloitte Connectivity and Mobile Trends Survey 2019, https://www2.deloitte.com/us/en/insights/industry/telecommunications/connectivity-mobile-trends-survey.html.

Jack Fritz is a principal in Deloitte Consulting LLP’s Technology, Media, and Telecommunications (TMT) practice and is a leader of the firm's 5G and Edge Computing practice with over a decade of exper... More