Understanding the impact of women+ health on society has been saved

Understanding the impact of women+ health on society has been removed

Understanding the impact of women+ health on society

Why women+ health must be a strategic imperative

The pandemic has put women+ health in the spotlight, highlighting gaps in health outcomes and the broader inequities that persist. Now is the time to make women+ health a strategic priority for our communities. The impact of women+ health on society cannot be overlooked.

During the COVID-19 pandemic, hospitalization rates for Black, Latinx, and Indigenous communities were nearly four times higher than for white Americans. Illness is only one of the ways minorities, particularly women, have been disproportionately affected.1 Since the onset of the pandemic, more than two million women in the United States have left the workforce, a labor shortage nearly one and a half times greater than that of men. The impacts of COVID-19 were further exacerbated for women with children, as nearly 50% of mothers with children in remote schooling reported their mental health had worsened during the pandemic, compared with 30% of fathers.

Disparities such as these offer clear evidence that leaders can go beyond their current initiatives and use the COVID-19 pandemic as a catalyst to accelerate change in women+ health, furthering education, research, and investment efforts in this space. As US birth rates continue to decline and women choose to have children later in life, we should broaden our definition of women+ health beyond reproductive care to include other diseases and conditions that affect women in different ways than they do men.

1Rock Health recently coined the term ‘women+ health’ to capture the full spectrum of health needs experienced by cisgender women, as well as those who have related health needs but may identify as transgender or nonbinary.

The future is female: Understanding the impact of women+ health on society

Women as the bedrock of our society

For more than two decades, the world has recognized that women’s rights are human rights. It’s a sentiment that also applies to health care, because women+ health is community health. Leaders who prioritize women+ health can correct the historical underrepresentation of women across industries and accelerate future economic growth and health equity progress. Here’s how:

Since women+ health is clearly critical to the well-being and prosperity of our society, why do significant gaps and disparities persist today? Despite comprising more than half of the US population, women represent only 7.8% of CEO positions in S&P 500 companies, 27% of members of Congress, and 36% of physicians in the United States as of 2019. One bright spot: The percentage of female doctors is increasing, as women represent an increasing proportion of future physicians; in 2019, they comprised 50.5% of all medical school students.

These trends persist across industries, companies, and communities. But because there are fewer women in positions of power, many decisions are made in a vacuum, where neither women’s unique needs nor potential implications for the broader population are considered.

Perhaps what is less well known is how women have been underdiagnosed, undertreated, and underserved in health care. Still prevalent today, gender bias negatively affects women’s experiences interacting with the health care system and receiving effective care. A 2019 study found that one in five women felt that a health care provider had ignored or dismissed their symptoms. Another study found that women with abdominal pain in the ER waited longer than men on average to receive pain medication (65 minutes, as compared with 49 minutes for men).

Similarly, the historic underrepresentation of women in clinical trials has led to a male-centric understanding of medicine, and the implications continue to persist today, despite progress. In 1977, the US Food and Drug Administration banned women of childbearing age from participating in drug trials, citing concerns about experimental drugs causing birth defects and monthly fluctuating hormone levels introducing complicating factors in studies.

It was not until 1994 that the US National Institutes of Health reversed the policy and mandated that women be included in clinical trials. But by that time, much of the damage had already been done. Almost two decades of medical research and pharmaceutical products developed without appropriate testing on women were in the marketplace.

The health care industry continues to increase female participation in clinical trials and their efforts to better understand women+ health care needs. As part of that process, we can all collectively continue to overturn misconceptions about women+ health and advocate for care rooted in robust, sex-specific research and evidence. 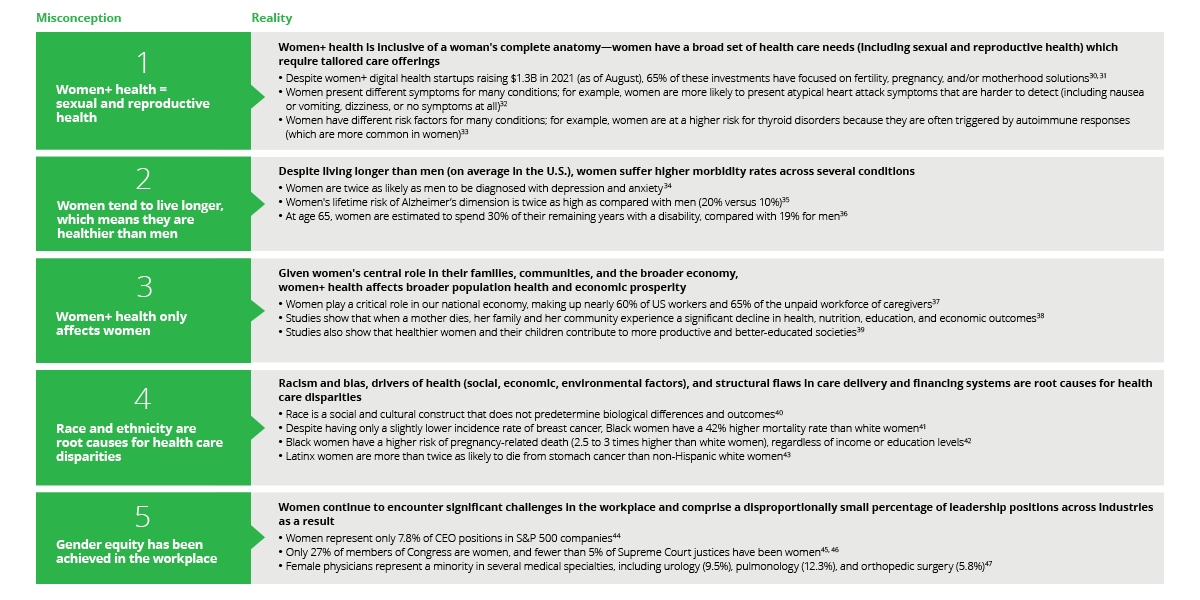 While some diseases, particularly those related to reproductive organs, are unique to women, many other diseases are different in women than in men, whether they present a difference in risk factors, symptoms, or treatment efficacy. Take heart attacks, for example, in which women experience different symptoms than men. Often, women will experience nausea and/or shortness of breath that can go unnoticed, given broader health education rooted in typical male symptoms, which frequently involve pain in the chest or left arm.

Traditionally, women+ health has been synonymous with obstetrics and gynecology, but the definition must be broadened; women are more than their reproductive organs, and their complex health needs span a broad spectrum of specialties and life stages. While it’s true that an OB/GYN is an important member of a woman’s care team, additional physicians and specialists (including primary care providers) are also critical to provide holistic health care services. Sex-specific research, knowledge, and approaches to treatment are essential to providing effective care for women. To improve women+ health outcomes, leaders should first understand the breadth and complexity of women+ health as a clinical discipline. 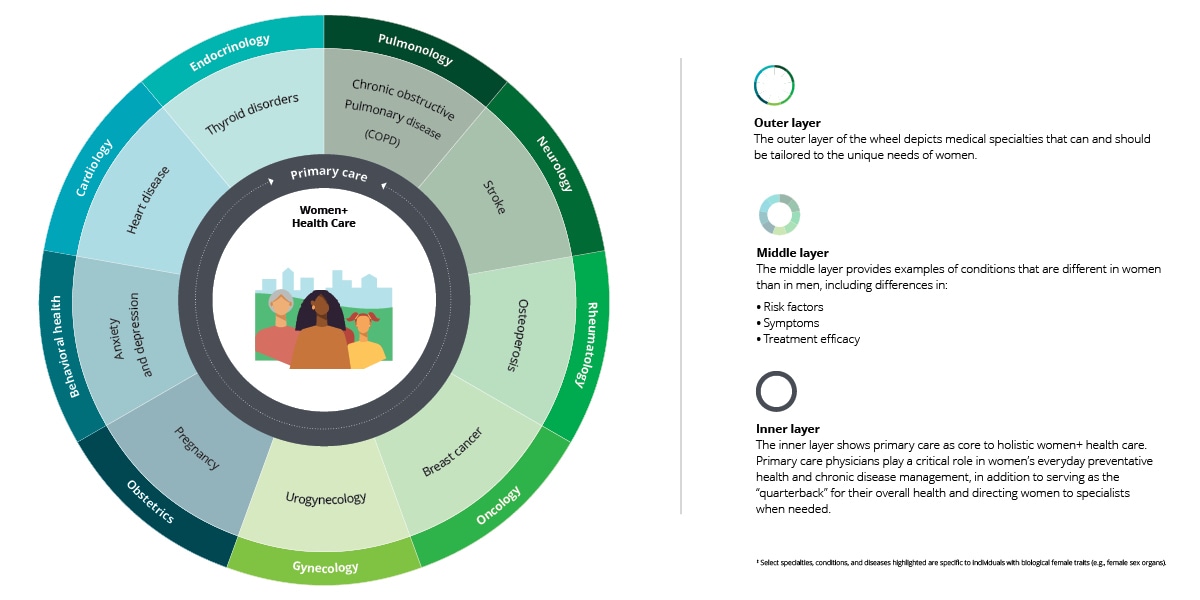 It takes a village: Our call to action

Women+ health is multifaceted and requires a cross-industry, collaborative approach to deliver comprehensive care offerings. Improving women+ health outcomes begins with increased awareness around a broader definition of women+ health, including common misconceptions that must be addressed, then continues with action across industries and functions.

Over the past several decades, we have made strides in increasing the number of women in the US workforce and in leadership roles. Now, it is time to change our approach to women+ health with similar fervor. Leaders have a unique opportunity to capitalize on current momentum from the COVID-19 pandemic and change how we define and approach women+ health. These efforts are critical not only to improve the health of women, but also, ultimately, to create healthier and more productive communities.

Advancing health equity by translating our purpose into action

What is health equity?