Overall, the FRB and FDIC (collectively, “the agencies”) have identified substantial improvements in the resolution plans since the 2015 submission, and found no “deficiencies,” which means that re-submissions prior to the scheduled filing date of July 2020 will not be required, and the FRB and FDIC are not in a scenario in which they are compelled to impose additional capital, leverage, or liquidity restrictions on the international holding companies (IHCs) of these FBOs in the near term. However, all four FBOs’ plans had at least one “shortcoming” with all four showing shortcomings in governance mechanisms, with Credit Suisse having additional shortcomings in the areas of liquidity (financial) and shared services (operational). Barclays, Credit Suisse, and Deutsche Bank were advised to include capital forecasting-based resolution triggers, while UBS was asked to also include triggers linked to liquidity forecasts.

The LISCC FBOs will need to submit project plans by April 2019 that describe in detail how the firms intend to address their vulnerabilities by the next deadline for resolution plan submissions in July 2020. The project plans must cover in detail not only the specific shortcomings identified by the agencies, but a broader range of initiatives to improve each firm’s readiness for an orderly resolution under the US Bankruptcy Code.

Though no deficiencies were identified, all four LISCC FBOs had at least one “shortcoming,” and will need to submit project plans by April 2019 that outline how the firm intends to address the Agencies’ feedback by July 2020.

Below is a list of remaining projects for the four FBOs to improve the resolvability of their US operations under the US bankruptcy code. The four firms will need to develop a detailed project plan by April 5, 2019, and the ongoing enhancement initiatives that were developed in response to the FBO Guidance must be completed prior to July 1, 2020.

Financial metrics for FBO US operations

Below is a table showing the key financial metrics of the LISCC FBOs’ US operations. The feedback letters compared the numbers between current operations (as of June 30, 2018) and those from December 31, 2008, commenting on the fact that there was a considerable reduction in the size of US operations for FBOs following the financial crisis and in response to the implementation of Regulation YY.7 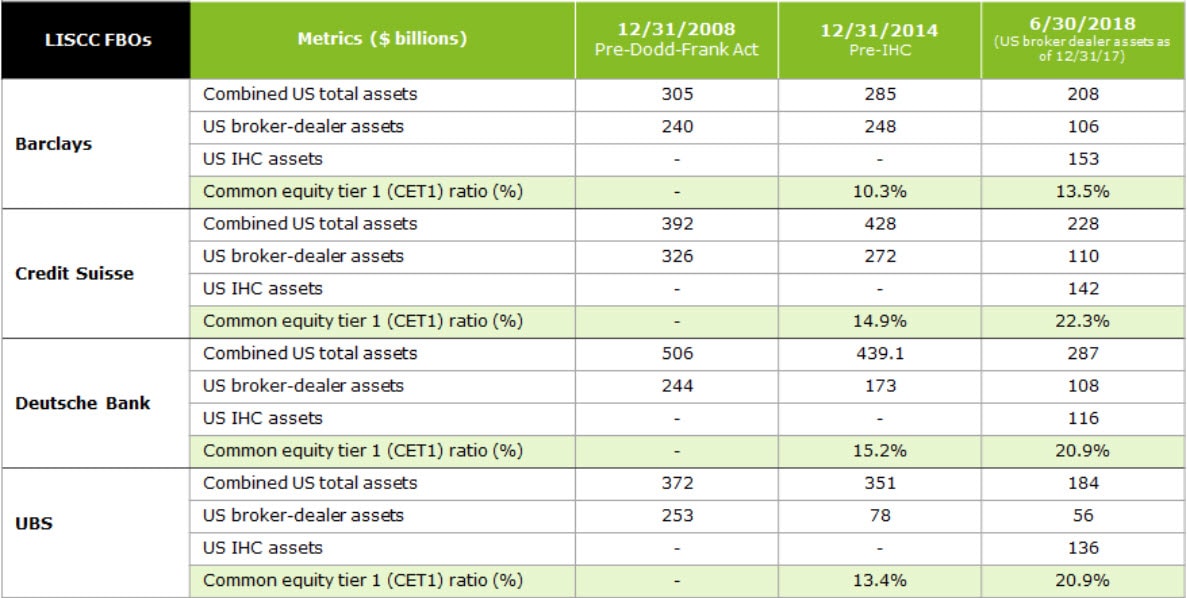 The feedback letters to the LISCC FBOs emphasized the importance of cross-border cooperation with the parent country authorities in order to enhance the likelihood of a successful resolution of the FBO’s global operations and prevent risks to the financial stability in the United States. The letters express the agencies’ objective to proactively engage with the FBOs and their non-US counterpart authorities to support better resolvability and facilitate orderly resolution when needed. The feedback letters lay out three main areas of focus for global regulatory cooperation: