The case for brands taking a stand has been saved

The case for brands taking a stand has been removed

The case for brands taking a stand

Paul Alexander, CMO of Eastern Bank, explains why he’s “cautiously pessimistic” that brands will begin taking stances on social and other issues of importance to customers and other stakeholders.

With access to more information than ever, consumers aren’t only researching the best products and deals; many are also interested in making sure their dollars are spent with companies that share their values. In Cone Communications’ 2017 Corporate Social Responsibility study, 87 percent of consumers say they would purchase a product from a company that “stood up or advocated for” an issue they care about. Similarly, a Sprout Social survey finds two-thirds of consumers believe it’s important for brands to take a stand on political and social issues.

Accordingly, some CMOs may be coming around to the view that it is advantageous to be more public about their corporate values. In the semiannual CMO Survey, conducted by Christine Moorman at Duke University’s Fuqua School of Business and supported by Deloitte and the American Marketing Association, a small-but-growing number of CMOs say it is appropriate for brands to take stands on social issues. In the August 2018 survey, 21 percent of respondents say they feel it’s appropriate to take positions on political issues, compared with 17 percent who answered the same the first time the question was asked in February 2018.

Among those who are willing to take a stand, three quarters (75 percent) say doing so would demonstrate the company cares about more than profits, and nearly as many (70 percent) say it would help attract customers and partners. (Conversely, of the respondents who believe it inappropriate to take a stand, 68 percent say doing so would have an adverse effect on attracting customers and partners.) 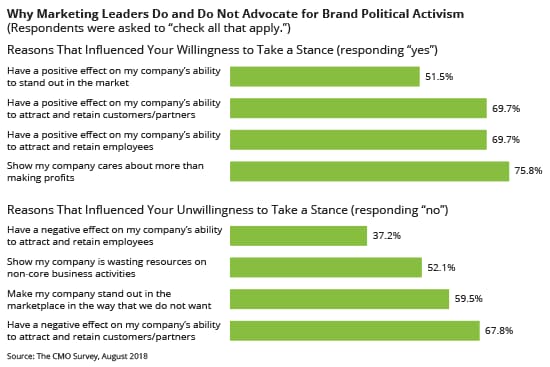 Paul Alexander, CMO of Eastern Bank, is a believer in brands taking an activist stance. In 2017, Eastern launched its “Join Us for Good” marketing campaign. Under the campaign’s umbrella, the bank, along with a few others in the business community, has taken stands on LGBTQ and donated $1.5 million to immigration-focused nonprofits overwhelmed with demand amid the country’s ongoing debate on the issue.

In the following Q&A, Alexander, whose career has included stints at Liberty Mutual Insurance, Procter & Gamble, Time Inc., and Campbell Soup Co., speaks about Eastern’s strategy, how executives make decisions about what issues to support, and whether more companies may be pursuing similar approaches.

Q: Why is it important to Eastern Bank to include social issues in its brand purpose?

Alexander: We want people to feel like they’ve joined a movement. That’s how we define our position: To in some small way support issues that are important to our customers, our colleagues, and our community. In the best cases, there’s an achievable outcome or call to action.

How do you decide what issues to get involved with?

Alexander: Our North Star is to choose issues that impact our company footprint and include some sort of action. Taking a knee during the national anthem, for instance, isn’t necessarily a Massachusetts-only issue, and there’s not a different or unique call to action for us to put on it. It’s important to be selective to keep from overstepping. Using pink hats in our materials to promote our commitment to women-owned businesses could verge too far into taking a national political stance, for example.

Alexander: It has to come from a place that’s real. Our CEO is more than willing to potentially lose an account by stepping out on an issue that he believes is the smart and right thing to do. Having a diverse board of trustees and advisers is also important. Our lead director is one of the few African-American women to hold that position in the country. Diversity and inclusion are critical to her, and, by extension, they’re important to us. With that perspective, we understand the issues, we’re credible on those issues, and we have advocates that can take our position out into the community.

The companies that have been successful as activists—Patagonia is one that comes to mind—have made it a part of their DNA and have been able to sustain it long term. Some newer companies have come out of the gate with activism as a central business purpose. That may help them do it right in the long term.

What may be keeping other companies from including social impact as part of their strategy?

Alexander: Brands have long thrived by playing it safe, and many—if not most—will continue to follow that path. The larger a company gets, the harder it is to do because there are more stakeholders involved. Anything that doesn’t show a direct contribution to results can be viewed as a distraction. Wading into those waters with some consistency is hard. It requires a board and a CEO with a strong backbone. Brand purpose of this nature is a marathon, not a sprint. Tying it to outcomes takes time, and everybody wants case studies showing positive results. The proof will come when those who step out on this thrive. That’s what’s going to convince hearts and minds. Let’s put it this way: I’m cautiously pessimistic. I’m hopeful more brands will consider it, but I’m cognizant of the real world.

Mr. Alexander’s participation in this article is solely for educational purposes based on his knowledge of the subject, and the views expressed by him are solely his own.

This content was originally published on the Wall Street Journal CMO Today. 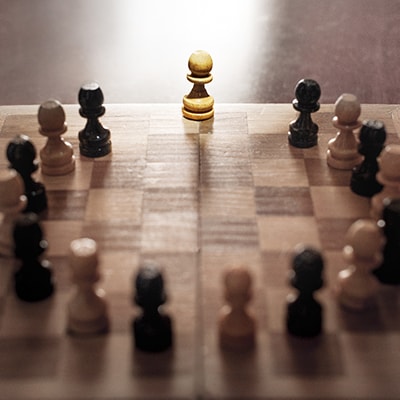 "We’ve found it draws more people to us than it turns away,” Alexander says. “Since we started the campaign, the feedback we’ve received has been roughly 80 percent positive to 20 percent negative."

Repositioning the CMO from gains to growth