The future of digital banking strategy

Most of the top US banks run their core banking operations on aging platforms that were deployed in the 1980s and 1990s. These platforms are either homegrown or so heavily customized that they no longer resemble the original vendor product purchased, adding to complexity in maintenance. Institutions are aware that these systems require some level of modernization, but until recently they have found themselves looking at massive investments of time, effort, and money. Historically, replacing core banking systems was an expensive undertaking that often couldn’t demonstrate a return on investment in the short term. A full replacement could be a multiyear effort and a significant resource commitment. There’s also considerable operational risk involved due to the core banking transformation complexity and the potential disruption of day-to-day operations.

Another historical drawback to modernization is that most legacy platforms may still be sufficient to run core operations. So it’s not surprising that the vast majority of banks have chosen to retain their legacy core systems, instead of building stand-alone applications or implementing manual processes to address gaps.

Most large banks have recovered from the burden of complying with the slew of regulations and reporting requirements imposed on them following global events in the early 2000s and the financial crisis of 2008. Responding to regulatory mandates required banks to direct a large portion of their budget and resources toward compliance for more than a decade. But as banks achieve regulatory compliance, they have more funds to focus on growth-centered transformation to enhance their digital capabilities.

Leaving core platforms alone has also become untenable. Today, many banks are faced with expiring maintenance and support contracts and a patchwork of poorly documented customizations and integrations that are cumbersome to unravel. Banks are also dealing with increasingly scarce—and therefore expensive—resources that have knowledge of older technologies, such as common business-oriented language (COBOL) and mainframe systems. Ultimately, given the heavy customization of most legacy platforms, upgrading may be nearly the equivalent of implementing an entirely new platform.

This convergence of factors for change, availability of discretionary funds, advancements in modernization offerings, and a less clear proposition to maintain the status quo make core banking transformation and modernization an imperative that banks must act on.

You no longer have to bet the bank

The central positioning of core banking systems makes them one of the most critical components in the overall banking architecture. Any change in these core systems will have an impact throughout channels and operations. In the past, completely replacing the core was the only upgrade option, making a core banking platform upgrade a “bet-the-bank” decision.

Fortunately, deciding to modernize a bank’s core is no longer a binary choice (do nothing or total replacement), thanks to massive advances in core banking technology that supports a variety of solutions. Emerging vendors are now starting to offer next-generation, cloud-based banking, and configuration-driven solutions that can provide an alternate and less disruptive path for banks. These next-generation platforms allow banks to innovate and address their most pressing needs while continuing to leverage their legacy platform for the majority of core banking functionality. Legacy vendors are also innovating, providing banks with additional options to augment existing platforms with select next-generation features.

With a greater array of technology solutions available to them, banks now have a spectrum of options to transform their core capabilities. To determine which option is best for them, banks need to establish their modernization profile based on the sustainability of their existing platform, appetite for risk, urgency to transform, the need to innovate their product and service offering, and the complexity of their data strategy.

It’s critical to underscore the importance of a robust data management strategy across the bank. This will ensure that a one-time data migration and future ongoing data integrations take place smoothly and in light of any discussion around core modernization or digital transformation—particularly when multiple lines of businesses, channels, and products exist with significant overlap and varying levels of data quality. Irrespective of the preferred modernization option, banks must understand their current state and roadmap for how they envision their data assets to flow within their enterprise. Managing data effectively isn’t only necessary from the perspective of operational efficiency and accuracy. It also presents an opportunity in terms of richer customer experiences, better cross-selling opportunities, and other external monetization revenue streams that banks must consider as they aspire to achieve a maximum bang for the proverbial buck. Additionally, adopting a concrete data and digital banking strategy will equip banks to add advanced analytics capabilities to their existing IT environment and enable them to gain real-time insights to drive optimal decision-making. We look at five main options for banks to consider:

Which path is right for your bank?

The decision of whether to replace, augment, re-factor, or re-platform the core is complex. Because every bank is different, a one-size-fits-all approach is ill-advised. Rather, an in-depth analysis of current infrastructure, market dynamics, customer needs, and organizational capabilities is required. Our approach involves working through a set of key decision points that lead to an informed decision. Responses to these decision points will help a bank understand which option may work best for it by balancing risk, business drivers, and current capabilities. 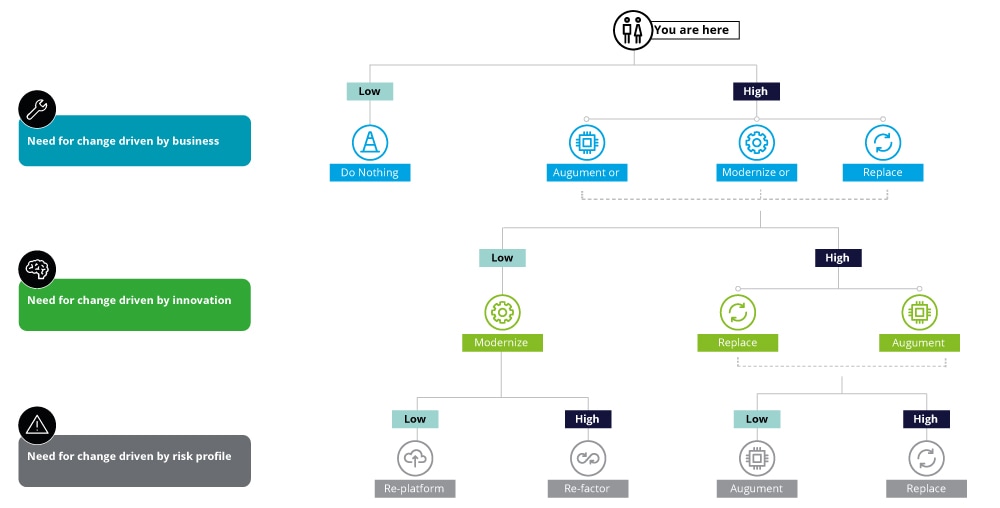 Selecting the best approach to core modernization is a complex strategic decision that requires banks to assess current capabilities, customer needs, market trends, and operational risk. This uncertainty can be challenging, and we can help to determine the approach that supports your digital banking strategy and transformation objectives.

As the world’s largest professional service organization, Deloitte offers a full range of disciplines that our clients draw on to realize their digital journey. Our track record of defining and driving end-to-end digital and core banking transformation programs for banks means that we understand the options available to you, while also recognizing that transformation isn’t a one-size-fits-all journey that can be overly prescribed.

Our approach is a mutual journey: We engage in conversation and listening, and together we reach a decision that makes the most sense for you given the many decision points that influence your business and technology strategy. We have the capabilities, experience, and tools to not only help banks determine a modernization path but to also establish a core banking transformation roadmap, select and design effective solutions, and then implement them across all aspects of large transformational programs.

Cloud based core banking: Is it possible?