The critical roles of five M&amp;A stakeholders has been saved

The critical roles of five M&amp;A stakeholders has been removed

Who should be involved in the mergers and acquisitions process—and when?

Five key M&A stakeholders can significantly impact the mergers and acquisitions process—and the ultimate value of the deal. Successful M&A deal makers emphasize the importance of getting the right stakeholders involved at the right time.

Activity in mergers and acquisitions has spiked halfway through 2018, with global M&A volume up nearly 60 percent through June according to Dealogic,1 as companies increasingly turn to corporate combinations as an alternative to organic growth. While volume might be up, the number of deals that succeed is another issue; our fall trends2 report reveals that more than half of respondents said at least some of their deals failed to meet expectations.

Less experienced acquirers—smaller or midsize companies that are fairly new to M&A and larger companies, including startups, interested in adding talent or capabilities through a transaction—can enhance their likelihood of success by gleaning insight from those with time-tested, successful deal-making track records. One key element to achieving the value creation that is envisioned at the start of the process: having the right people and teams in place.

Regardless of a company’s size or experience, effective acquisitions should include five key stakeholder roles to enhance the odds of a successful transaction. To be sure, no two deals are alike; there is no single, overarching recipe for meeting M&A goals as companies in different industries have their own unique demands. Even companies in the same sector have different strengths, weaknesses, and expectations. Further, deal complexity and type (transformational or bolt-on) can alter the framework for the five stakeholder groups—and companies will want to flex this approach to meet their specific strengths and needs.

Relative newcomers to M&A can learn from the leading practices of serial, experienced buyers—and get the appropriate stakeholders involved at the right point in the transaction.

A variety of stakeholders should be involved in the M&A process, with each party having varying levels of involvement and effort throughout. 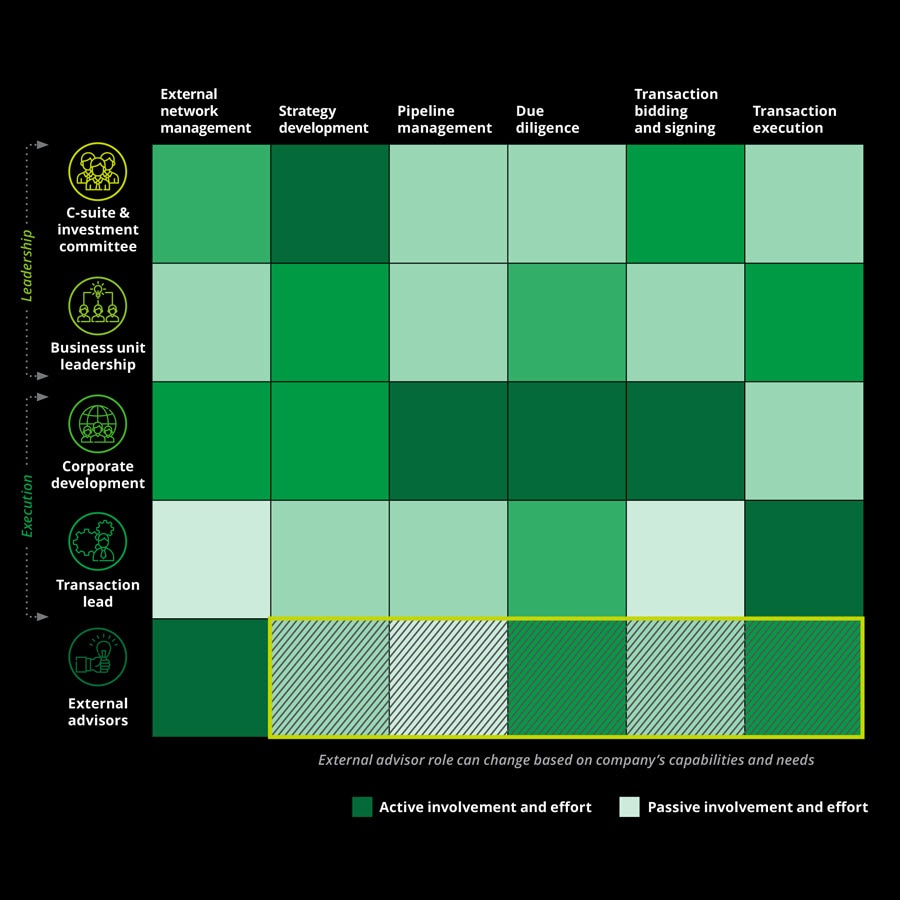 The investment committee (IC) includes the CEO and other C-suite and senior-level executives. This group serves as the most influential constituent—the ultimate decision maker, retaining accountability for the effectiveness (or lack thereof) of every transaction.

The IC should be involved early on in the M&A process to establish a coherent strategy and a unified vision across the company. Later, it can assume a less day-to-day active role while other groups execute on the strategic plan it set.

Once a transaction is completed, the business unit (BU) operates the acquired business. Thus, its role is critical in the latter stages of the M&A lifecycle. However, it’s important to bring in operational knowledge and aptitude early in the M&A process so that the BU can meld its experience with the strategic imperatives in the following ways:

Identifying areas where an acquisition could have an outsized impact

Effective acquirers note that the BU leadership should support the due diligence and integration processes, as they have specific knowledge that could raise potential red flags and have a full understanding of how the target business should operate once acquired.

At smaller companies, having the business unit involved can pose a stiff challenge, due to headcount and capacity constraints. Key employees might have to assume multiple roles and provide insight while focusing on their regular business operational duties.

The corporate development team is arguably more involved in the numerous steps throughout the M&A lifecycle. Its role, effectively, is M&A—and thus it stays involved in all aspects of the transaction.

Many serial acquirers have a dedicated corporate development team responsible for spearheading the tactical components of an acquisition. This typically includes:

Another key responsibility of corporate development is more of a sales role—portraying the company as an “acquirer of choice.” The corporate development team most frequently interfaces with the target and thus can demonstrate extensive knowledge of the target, have a well-articulated acquisition strategy and execution plan, and ensure that the required capital is available or can be secured.

The transaction lead’s primary role is at the end stages of an acquisition—driving deal execution and integration.

Companies, however, often underestimate the effort required to integrate an acquisition and do not engage their transaction leads early enough, which can result in unrealized synergies. The earlier a transaction lead is engaged the more thoroughly he or she can understand the specific risks, challenges, and opportunities of the deal.

While it’s generally beneficial to select someone with prior transaction experience, an employee with strong cross-functional management and execution skills can be effective with the support of an experienced corporate development team and strong leadership from the investment committee.

Advisors provide the role of augmenting a company’s internal capabilities, providing access to targets, and providing support as needed, throughout the M&A process. Experienced buyers have a deep network of their own, but for many companies newer to the M&A scene, an external advisor can provide great assistance with sourcing and screening potential targets.

Besides sourcing targets, advisors can provide assistance throughout the M&A lifecycle, including in conducting diligence, supporting negotiations, and execution. It’s important for each company to weigh the cost of hiring external advisors against the risk of running a suboptimal or flawed acquisition process, which could ultimately destroy value. Some companies will find they need external advisors for nearly every deal, while others will assess their use on a case-by-case basis.

As deal activity and valuations sustain a heady pace, companies that are relative newcomers to M&A can learn from the leading practices of serial, experienced buyers—and get the appropriate stakeholders involved at the right point in the transaction.

While only one component of effective deal execution, understanding the roles of different stakeholders and involving them at the right time is a critical first step for any new acquirer hoping to derive value from a deal. 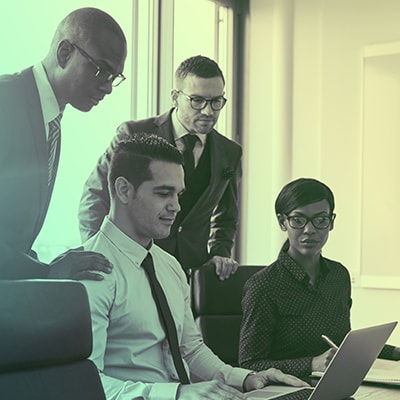 Russell leads Deloitte’s US M&A Transaction Services practice, where he provides end-to-end M&A services to global clients. He also serves as the leader of the Industrial and Capital Projects Advisory... More

Susan is a Principal with Deloitte Consulting LLP and leads the M&A Consultative Services practice. Susan has spent over 20 years focused on M&A, predominantly Post-Merger Integration and Divestiture.... More