Could 'smart speakers' provide the solution for tapping this potentially lucrative audience?

Although more than 40 percent of US households subscribe to a music streaming service,¹ the penetration level among the counter-culture generation is well below average, and data from a Deloitte survey outlines how music streaming companies could rethink their strategies used to reach these consumers. Despite the popularity of music streaming services, some under-penetrated consumer segments could be targeted by service providers through partnerships with some device makers. 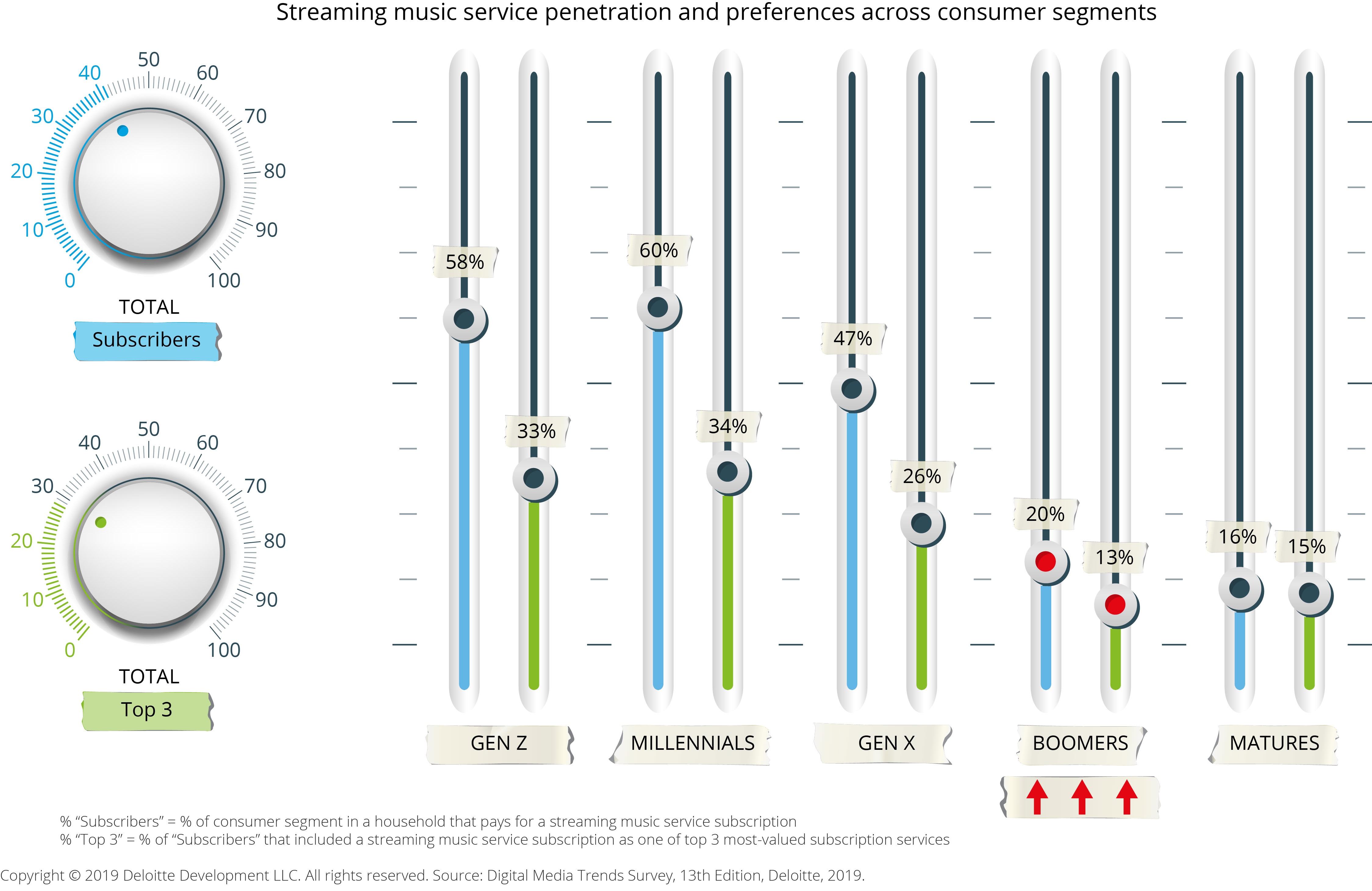 The rise of the subscription economy has redefined how media and entertainment (M&E) services are distributed. It’s easy for users to access content, and for service providers to access customers.

Although the move to direct-to-consumer (DTC) strategies, exemplified by the strength of subscriber numbers for streaming services, have been a strong growth driver amid increasingly challenging market conditions, some M&E content verticals have struggled to access consumers through a DTC service.

This is especially true when it comes to getting baby boomers to adopt music streaming services.

The past 12 months have seen a continued explosion in DTC streaming—including 40 percent adoption of music streaming services across all generations, according to Deloitte’s Digital Media Trends Survey, 13th Edition.2 However, the study also shows that people over 52 years old are under-represented across consumers that have music streaming subscriptions.

In fact, only one-fifth of baby boomers currently have a music service subscription (see chart).3 This may be surprising, given boomers’ close association with the ‘60s counter-culture movement that catalyzed an inflection point in the music industry.

Although 20 percent of baby boomers now have a music streaming subscription (a 7 percent increase over the past year), their level of adoption trails other generations by a significant margin (Gen Z: 58 percent, millennials: 60 percent, Gen X: 47 percent).4

Considering that boomers constitute the biggest and wealthiest market segment,5 they present service providers with a potentially lucrative opportunity. Although there are signs that some consumers are growing frustrated with managing multiple subscriptions, the survey results for boomers show they have a lower-than-average number of subscriptions and subscription service-related frustration. The behavior and consumption profile of boomers indicate that there is an opportunity to sell and offer subscription services and bundled entertainment services to these consumers.

However, it won’t be easy.

For example, Deloitte’s study shows that boomers currently value music streaming services least of all generations, including matures (72+ years old). When boomers who subscribe to a music streaming service were asked if it ranked among their top three M&E services, only 13 percent said it did (compared with 15 percent of matures).6

However, while only 25 percent of boomers own a smart speaker, they tend to value it more than the average consumer. In addition, among boomers who use smart speakers, 36 percent rated “playing music” among their top two most-valued capabilities-matching Gen X and the average for all consumers.7 Further, 34 percent of these boomers also agree that voice-enabled digital assistant regularly finds music they want to listen to—which is above the 31 percent average.

The implication is clear: music streaming companies could grow their subscriber bases by working with smart speaker manufacturers to target boomers. Indeed, some leading smart speaker makers already offer streaming music services, but the survey’s data points could make interesting reading for ‘pure-play’ music streaming platforms looking for ways to drive the next phase of growth.

This charticle authored by David Ciampa on August 7, 2019.