The cost of convergence: $1.46 trillion and counting has been saved

The cost of convergence: $1.46 trillion and counting has been removed

An Article Titled The cost of convergence: $1.46 trillion and counting already exists in Saved items

The cost of convergence: $1.46 trillion and counting

US tech, media, and telecom companies have spent $1.46 trillion on inter- and intra-segment M&A since 2013

Cross-segment M&A activity is blurring the lines for technology, media, and telecom companies. Through M&A, TMT companies are vying to sell a bigger share of the content we consume, the connectivity we need to get it, and the devices we buy to access it. 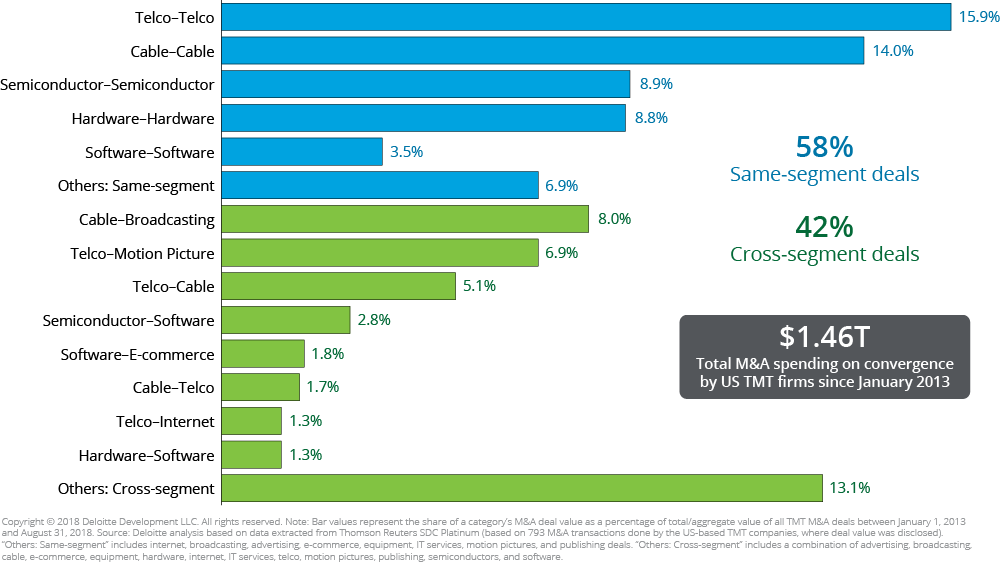 Source: Deloitte analysis based on data extracted from Thomson Reuters SDC Platinum. Based on 793 M&A transactions done by US TMT companies, where value was disclosed.3

The growth of streaming video services, ever-faster connections, and consumers’ use of the smartphone to watch TV have sparked a fresh wave of mergers and acquisitions (M&A). US TMT companies are buying one another to the tune of $1.46 trillion in less than six years.1 Through M&A, TMT companies are vying to sell a bigger share of the content we consume, the connectivity we need to get it, and devices we buy to access it.

What does this M&A activity look like, and how are TMT companies changing as a result? To find out, Deloitte analyzed M&A deals conducted by US-based TMT organizations from January 1, 2013, to August 31, 2018 (see figure 1).

In about 58 percent of the deals shown in figure 1, US TMT companies bought competitors to bolster their core businesses. For example, many telecom and cable companies are using M&A to expand their subscriber bases and gain control over the content delivery value chain.4 And many media companies are acquiring other content organizations to enhance their network and offerings.5

Over the same period (January 1, 2013, to August 31, 2018), 42 percent of US TMT M&A deals have been cross-segment in nature. Telecom-media mergers and acquisitions, aimed at combining content with video distribution, have seen a recent uptick as well.6 Meanwhile, several and computer hardware and equipment companies are acquiring software companies to build digital capabilities and prepare for Industry 4.0.7 Cross-segment acquisitions helped technology companies enter high-growth markets while adding niche capabilities to fend off competitors.8

M&A figures aren’t the only measure of the transformation taking place in TMT. Many TMT companies are divesting assets that no longer fit with their core businesses or their new strategic direction.

Between January 1, 2013, and August 31, 2018, the aggregate value of divestitures in the US TMT industry was $358 billion.9 Deloitte’s analysis of these transactions showed that multiple computer hardware companies divested their IT services business. Several telecom operators shed their tower infrastructure, wireline, and data center business to focus more on wireless. Meanwhile, many broadcasting companies parted with their cable and TV station assets.10

Additionally, recent US tax reforms will likely help keep M&A volume high. US tech companies collectively hold roughly $600 billion in overseas cash. Some plan to repatriate that cash and use it for M&A.11

“While it is critical to establish tax efficiencies in the acquisition and integration of new assets, it is just as critical for the seller to structure the sale or separation efficiently,” says Brian Pinto, partner, International Tax & Transfer Pricing Services practice, Deloitte Tax LLP. “If done well, tax synergies can enhance the enterprise value on both sides of the transaction.”

When we read about individual deals, even big ones, it can be easy to miss the scope of the change we’re witnessing. But when we look at the aggregate numbers—$1.46 trillion in M&A and $358 billion in divestitures in less than six years—we clearly see the size of the bets TMT companies are placing, and the critical importance that these bets are winners. While M&A success depends on the right strategy,12 paying attention to tax issues can help set the stage for a winning approach.

This charticle authored by Karthik Ramachandran on December 6, 2018.

1 Deloitte analysis based on data extracted from Thomson Reuters SDC Platinum between January 1, 2013, and August 31, 2018. This figure includes only M&A activity in which the acquirer was a US-based tech, media, or telecom company acquiring another TMT company. These acquisitions are considered “same-segment” when, for example, a software company acquires another software company. They are considered “cross-segment” when, for example, a telecom company acquires a cable company.
2 In the bar chart, values represent the share of a category’s M&A deal value as a percentage of total/aggregate value of all TMT M&A deals between January 1, 2013, and August 31, 2018.
3 “Others: Same-segment” includes internet, broadcasting, advertising, e-commerce, equipment, IT services, motion pictures, and publishing deals. “Others: Cross-segment” includes a combination of advertising, broadcasting, cable, e-commerce, equipment, hardware, internet, IT services, telco, motion pictures, publishing, semiconductors, and software.
4 Chris Kosmopoulos, “Why Telcos Are Acquiring Ad Tech and Media Companies,” Marfeel, August 1, 2018.
5 Cynthia Littleton and Todd Spangler, “Merger Mayhem: Media Companies Scramble to Bulk Up in Order to Survive,” Variety, April 24, 2018.
6 Wei Shi, “Telecoms and Media Industries Driving the Highest M&A Year Ever,” Telecoms, July 2, 2018.
7 Hakan Altintepe, “Mergers and Acquisitions Speed Up Digital Transformation,” CIO, July 27, 2018.
8 Jeff Desjardins, “The Biggest Tech Companies in the World Have Bought Up a Lot of Smaller Startups,” Business Insider, March 4, 2018.
9 Deloitte analysis based on data related to 514 divestiture deals by the US based TMT companies, extracted from Thomson Reuters SDC Platinum between January 1, 2013, and August 31, 2018.
10 Deloitte analysis based on data extracted from Thomson Reuters SDC Platinum between January 1, 2013, and August 31, 2018.
11 Helen Edwards and Dave Edwards, “What Will Big Tech Do with All Its Repatriated Cash? Buy Everything,” NextGov, January 31, 2018.
12 Joost Krikhaar, Jeff Loucks, and Marco Sguazzin, “Mergers and Acquisitions in Tech, Media, and Telecom: Charting a Well-Defined Integration Strategy,” Deloitte Center for Technology, Media & Telecommunications, 2018.

Questioning artificial intelligence ethics and the dangers of AI