Sports marketing strategies to stay connected year-round has been saved

Sports marketing strategies to stay connected year-round has been removed

With the proliferation of 24/7 sports TV channels, dedicated radio stations, and independent podcasts, there is no off-season. And there have never been as many opportunities for sports organizations to stay connected with their fans. Learn more about sports marketing strategies to boost year-round engagement.

Our survey finds that the more fans are engaged year-round the more likely they will spend on tickets and merchandise during the season. Further, off-season engagement can be a lever for moving fans up the tiers of fandom—pushing a casual fan who only watches games on TV to finally attend a game in person. The survey results highlight the following data points regarding year-round fan engagement:

Download the full report to learn more about how understanding the fan as an individual and optimizing the combination of frequency, content, and channel for each fan can be key to maximizing revenue streams.

This article is the third in a series addressing three individual aspects of fan engagement. The series started with the stadium experience, then examined engagement through over-the-top streaming and broadcast media, and now wraps up with the year-round fan experience. The series of articles comprises findings from a Deloitte survey of more than 15,000 respondents who were asked about relative importance and level of satisfaction within key attributes of fan engagement.

The Deloitte survey asked each respondent to self-identify their level of fandom for each of eight sports/leagues: esports, Major League Soccer (MLS), Major League Baseball (MLB), National Association for Stock Car Auto Racing (NASCAR), National Basketball Association (NBA), National Football League (NFL), National Hockey League (NHL), and Women's National Basketball Association (WNBA). For each sport/league, fans could self-identify at one of five levels: fanatics, love-it fans, casual fans, knowing the sport but not a fan, and not being familiar with the sport. Fanatics were defined as never missing a game—either in person or on TV; love-it fans were defined as watching often and going to live events when they could; and casual fans were defined as watching every now and then.

While the intensity of fan interest generally subsides once the season ends, it doesn’t completely disappear. In our recent study on fan engagement, 65 percent of fans said they want some form of content or information at least monthly during the off-season. As expected, fanatics engage at a much higher frequency than their casual and love-it counterparts.

Also not surprising, increased frequency of off-season consumption is correlated with higher fan spend. Across all fan types, those who engage only once a month in the off-season spend 40 percent more than fans who have no engagement in the off-season.

Identifying where to focus customer engagement activities in order to produce optimized financial outcomes requires some deeper analysis at the fan-type level. For instance, a casual fan who has an off-season engagement frequency that is higher than zero but less than monthly spends 52 percent more than the casual fan who has no off-season engagement. An example of this could be using team media properties to engage a casual fan, who may not even be aware the club produces content in the off-season. 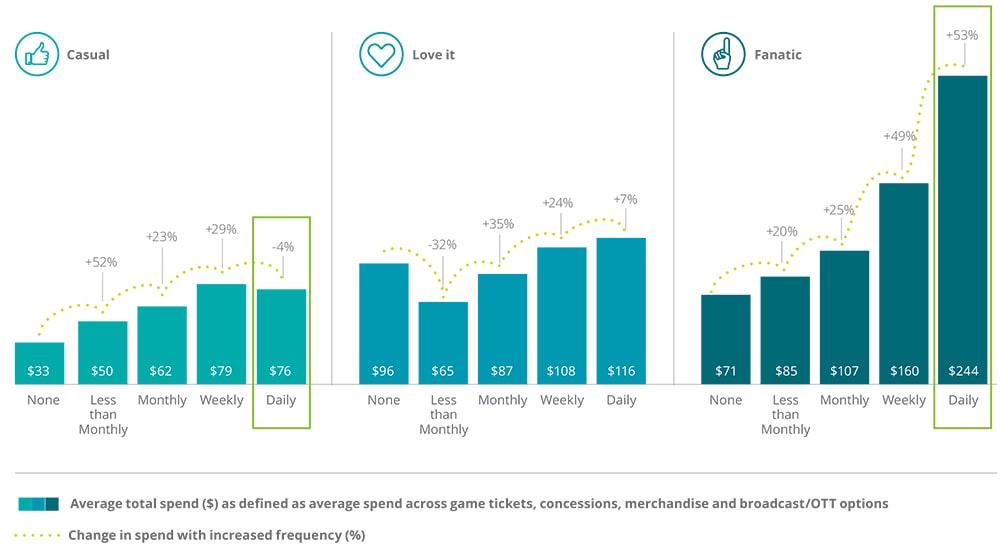 While casual fans may see daily notifications in the off-season as an annoyance, fanatics crave them. The key is to find the optimal frequency based on the profile of each individual fan.

During the season, live game action is the most important content that teams can offer fans. But in the off-season, teams typically need to be creative with the media and content they produce for fans. Although the organic content faucet is turned off in the off-season, this reset can present an opportunity for teams to differentiate themselves through customized off-season experiences that drive revenue.

At the most basic level, many fans just want to keep current with their team during the off-season. General team news is the most popular type of content followed by news related to player/coach roster changes and injury updates. Despite the higher demand for basic content, it doesn’t really “move the meter” when it comes to consumer spending. Instead, it’s the more personalized and in-depth content that is most closely associated with higher spend.

Additionally, our survey found that only 40 percent of fans find that the content they pay for is meeting their expectations, while they place an above-average-importance score on having quality content. This presents an opportunity for teams to offer premium content at a discount in order to increase the overall fan spend throughout the year. 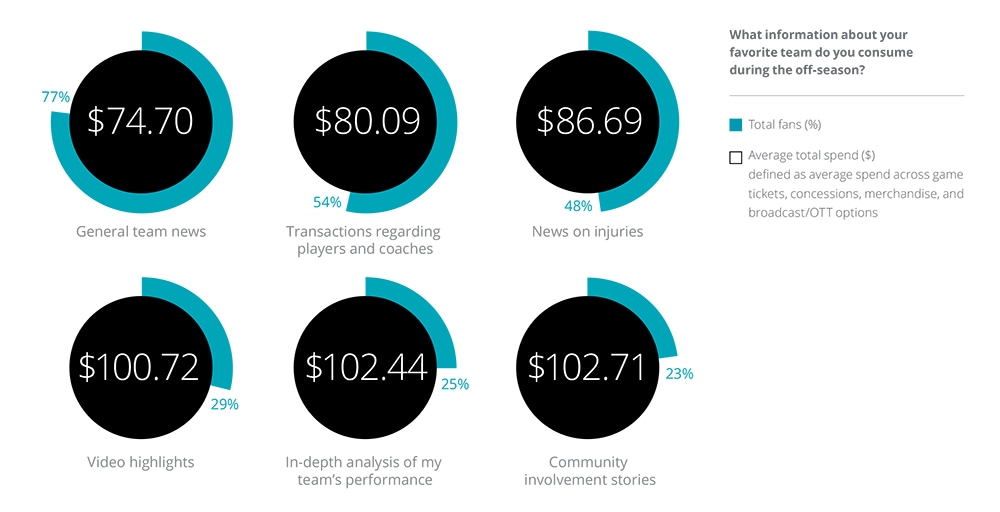 Picking your channel from a universe of options

In such a fragmented and competitive media landscape perhaps the biggest challenge for teams in executing fan engagement ideas is identifying the most appropriate channel. There’s a broad range from social media to broadcast, print to podcast and radio, and many more platforms fans use today. To navigate the current media landscape, teams should understand where fans are going to read, watch, listen, and interact with their favorite team.

In a league of their own

We saw several key differences across leagues in our survey with respect to year-round fan engagement:

Gearing up for next season

The sports season might be about wins and losses, but after the season is over, teams and leagues still have some plays and audibles to call to keep fans and consumers engaged. The message is clear: Maintaining year-round continuity of fan engagement can generate value.

More than 60 percent of fans say that having a great “year-round experience” would make them more likely to be more engaged with the team in the coming season—and 55 percent of fans say that it would make them more likely to purchase a ticket in the future. A challenge for teams is to recognize that each fan is different across a multitude of factors, and it’s important to develop a mix of sports marketing strategies that capitalizes on the differences across frequency, channel, and content.

Engaging fans in person and at home

Scouting the biggest trends in sports