Tablets feeling the pinch has been saved

Tablets feeling the pinch has been removed

After the kids lose interest, is the fate of the tablet written in stone?

Tablets burst on the scene at the start of the decade, characterized as media consumption’s answer to the Swiss army knife, conducive to both leisure and work. But now, the future of tablets is likely to be determined by how well product makers reengage consumers, especially the most tech-savvy segments.

The tablet’s success in large part was based on how it effectively married the best of the smartphone and PC. Almost a decade after its launch, however, the tablet’s relevance may be threatened by the evolution of its predecessors. 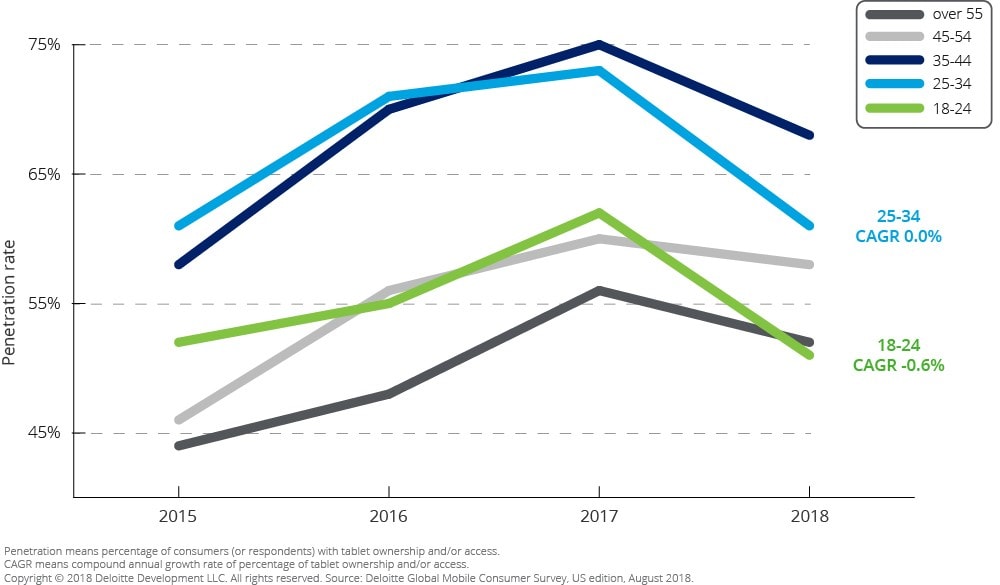 At first glance, the US tablet market appears to be in a position of strength, with consumers overall reporting an increase in device ownership and/or access from 51 percent to 57 percent between 2015 and 2018—marking a compound annual growth rate (CAGR) of 5.7 percent. Despite this, tablet ownership/access fell from 62 percent in 2017, according to Deloitte’s 2018 global mobile consumer survey, US edition.1 Looking deeper into this data, it points to some interesting usage trends across different consumer segments. The product’s relevance among a coveted consumer segment—millennials—also peaked in 2017. Tablet ownership/access for people aged 25 to 34 dropped from 73 percent in 2017 to 61 percent in 2018. It’s a similar story for those aged 18 to 24, in 2018, tablet ownership/access was 51 percent, down from 62 percent in 2017. The generation that was seemingly brought up “pinching screens” recorded the most severe decline in tablet usage—a negative 0.6 percent CAGR over the past three years.

In 2010, when the tablet hit the market, it set off an arms race by many electronics goods makers to produce their own multimedia devices. By 2014, about 15 percent of the world’s population owned a tablet.2

So, what is driving the tablet’s decline? Most likely, the culprit is the arrival of cheap, lightweight PCs and two-in-one detachable hybrid devices.3 Further, smartphones improved the viewing experience as they got bigger (e.g., phablets) and better screens, along with faster connectivity. Global tablet sales have been declining for more than three years, with annual shipments down to 164 million in 2017 from a peak of 220 million in 2014.4 North American sales are expected to fall from 47 million in 2017 to 44 million in 2020.5

These sales forecasts are in step with usage trends. Smartphones dominate other devices for short-form viewing—almost double the use of tablets for the same activity. However, for long-form content, which is perhaps more conducive to tablet use, consumers rated smartphones and tablets almost equally for viewing of sports, TV, and movies.6

As smartphones grow in size and ubiquity, and as the market for hybrid devices expands, is there room for the traditional tablet? Could a new app or use case enable tablets to become more relevant to consumers? Or, has the tablet’s fate already been irrevocably decided by the rapid evolution of smartphones, hybrid devices, and next-generation laptops?

This charticle authored by David Ciampa on December 14, 2018.

A new era in mobile continues

Once again, smartphones are at the center of the connected universe. Our survey revealed that consumer habits—from smartphone and smartwatch adoption and increased use of digital voice assistants to demand for data and anticipation for 5G—continue to dictate telecommunications trends.