Software really is &quot;eating the (tech) world&quot; has been saved

Software really is &quot;eating the (tech) world&quot; has been removed

The technology industry is increasingly driven by the growth of software, with hardware and devices taking a back seat

In 2019, the Deloitte Technology Fast 500 marks a milestone: For the 25ᵗʰ year, Deloitte has recognized 500 North American companies at the cutting edge of the technology industry, combining innovation, entrepreneurship, and rapid growth.¹ To honor the occasion, we analyzed the quarter-century of Fast 500 winners and visualized them by sector percentages (see chart). 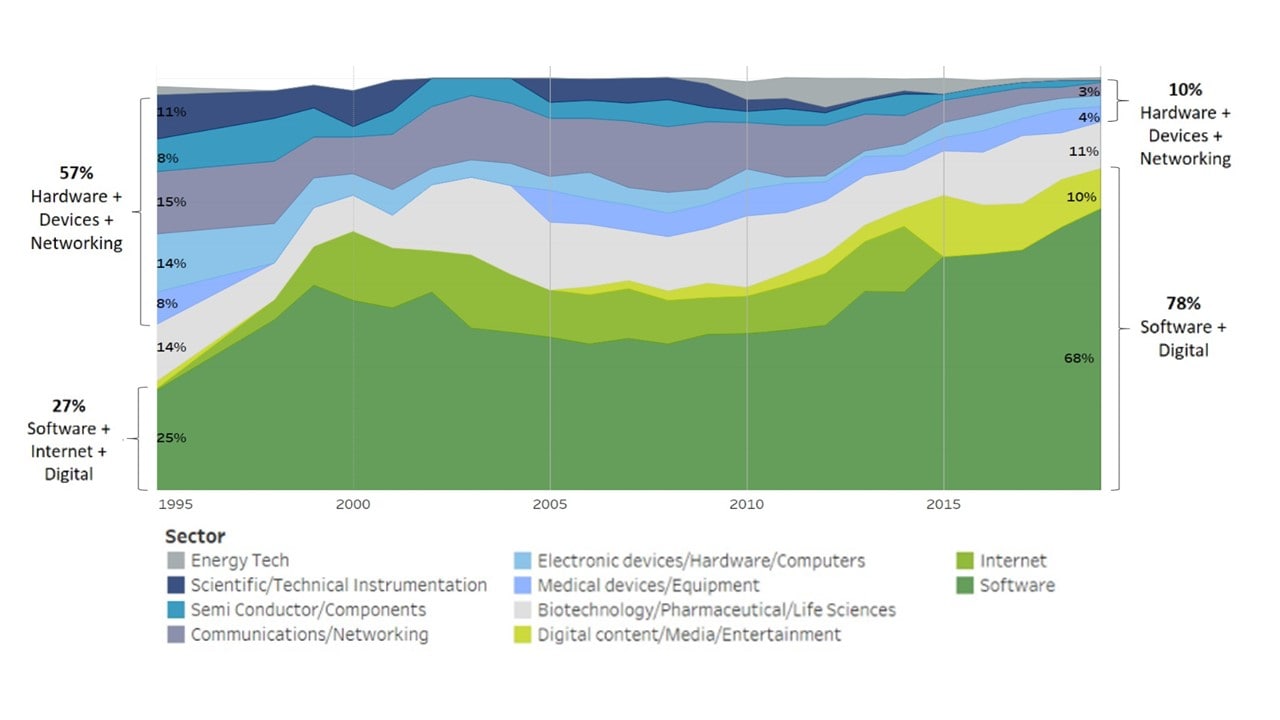 A curious thing has happened to the Deloitte Fast 500 list over past 25 years. Back in 1995, the list was dominated by hardware, device, and networking companies, which made up 57 percent of the winners.2 At the same time, software (along with internet/digital) constituted only 27 percent of the list. Fast forward to 2019, and there’s been a striking reversal. Software and digital content companies now make up 78 percent of the winners, while hardware, device, and networking companies constitute just 10 percent.

If the Fast 500 list is any guide, software + digital may now be the growth engine of the technology industry in North America.

The Fast 500 visualization brings to mind Marc Andreessen’s 2011 essay in the Wall Street Journal, in which he famously proclaimed that “software is eating the world” and foretold the current era of digital disruption, in which the software-fueled digital economy is growing faster than the gross domestic product (GDP), both in the United States and globally.3

It’s also interesting to note how the Fast 500 chart reflects the commercial emergence—and mainstreaming—of the internet.5 There were just two internet winners in 1995. As business use of the internet exploded, its representation on the Fast 500 did as well, hitting a peak of 89 winners in 2003. In 2015, the sector was retired from the list—reflecting that the internet is now woven into the fabric of businesses throughout all technology sectors. By the same time, digital content/media/entertainment—introduced as a Fast 500 sector choice in 2005—had matured into a sizable portion of the honorees, corroborating Bill Gates’s 1996 assertion that “content is king” and where he expected “much of the real money will be made on the internet….”6

Which Fast 500 sub-sectors are responsible for the greatest growth within software? From 2016–2019, software-as-a-service (SaaS) and enterprise software appear most often, representing about half of the software winners.7

Technology companies seeking faster growth may want to consider becoming more software-centric and possibly more cloud-based by investing in software research and development to expand their software capabilities, or by acquiring or partnering with rapid software innovators, such as those on the Fast 500 list.

This charticle authored by Susanne Hupfer on December 6, 2019.

1 Winners—representing public and private technology, media, telecommunications, life sciences, and energy tech companies in North America—are selected based on percentage fiscal-year revenue growth over a three-year period. The ranking is compiled from applications submitted directly to the Technology Fast 500 website and public company database research conducted by Deloitte LLP.
2 Sector categorization is self-identified by private companies, and determined from publicly available information for public companies.
3 Marc Andreessen, “Why Software Is Eating the World,” The Wall Street Journal, August 20, 2011.
Researchers estimate the digital economy is growing 2.5 times faster than the global GDP and project it will increase from 15.5 percent of global GDP in 2016 to 24.3 percent of global GDP by 2025 (see Huawei & Oxford Economics, “Digital Spillover: Measuring the true impact of the Digital Economy,” September 5, 2017). In the United States, the Bureau of Economic Analysis estimates the digital economy accounted for 6.9 percent of GDP in 2017 and had a real value-added average annual growth rate more than four times higher than the overall economy from 1998 to 2017 (9.9 percent for the digital economy vs. 2.3 percent for the total US economy). (See “Measuring the Digital Economy: An Update Incorporating Data from the 2018 Comprehensive Update of the Industry Economic Accounts,” United States Bureau of Economic Analysis, April 2019.)
4 Robert J. Shapiro, “The U.S. Software Industry as an Engine for Economic Growth and Employment,” September 2014.
5 Although its origins trace back to the late 1960s, business internet use didn’t blossom until the development of the World Wide Web and early browsers in the early to mid-1990s. See Kim Ann Zimmermann & Jesse Emspak, “Internet History Timeline: ARPANET to the World Wide Web,” Live Science, June 27, 2017.
6 Heath Evans, “’Content is King’ — Essay by Bill Gates 1996,” Medium, January 29, 2017.
7 In 2019, the next 36 percent of the software winners represent fintech, digital platforms, security, and data analytics organizations.

How can streaming advertising take advantage?