The technology industry’s trillion-dollar question has been saved

The technology industry’s trillion-dollar question has been removed

Since the 2008–09 economic downturn, many US technology companies have used their strong cash positions to fuel innovation, business expansion, and financing and equity-market-related activities. 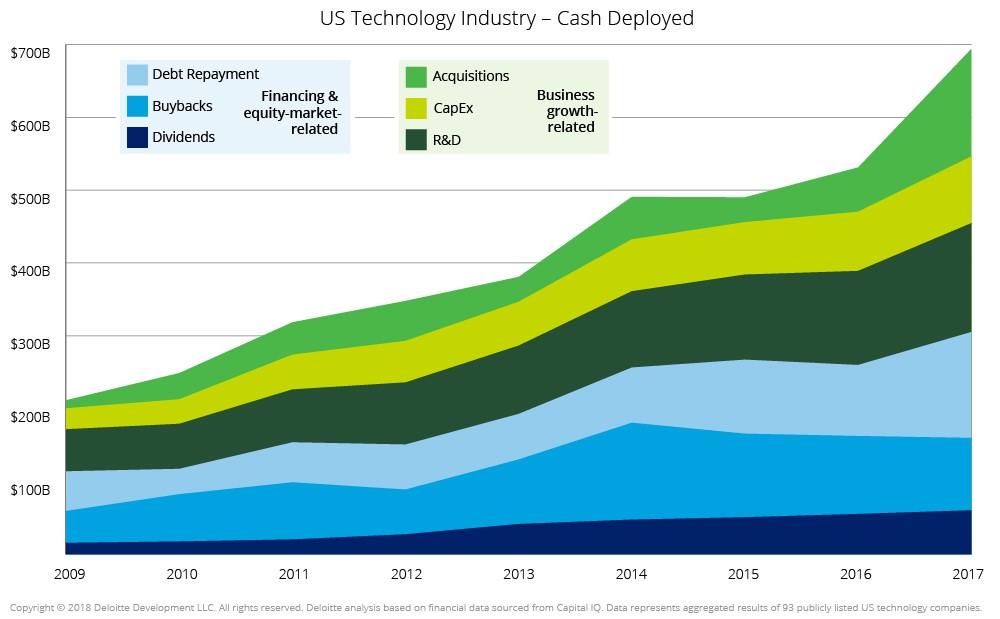 To gain insights into how things could play out, we examined the aggregated financial data of 93 publicly listed US technology companies between 2009 and 2017. At the time of our analysis, the combined cash of those companies had ballooned to nearly $1 trillion ($974 billion)—about 3.5 times the level in 2009.

Between 2009 and 2017, those companies posted nearly fourfold growth in cash used for research and development (R&D), mergers and acquisitions, and capital expenditure (CapEx) (combined), reaching $389 billion in 2017. Cash directed to business growth rose from 46 percent of total cash deployed in 2009 to 56 percent in 2017.

During the same period, cash used for financing and equity-market-related activities (a combination of share buybacks, debt repayment, and dividends) increased nearly threefold, reaching $305 billion. For four out of nine years during 2009–17, the combined cash applied to and equity-market-related activities exceeded total spending on business expansion efforts. Moreover, in six out of nine years, debt repayment and buybacks together constituted at least 40 percent of cash deployed. Cumulative cash used for share buybacks during 2009–17 was $791 billion, clearly showing the technology industry’s emphasis on enhancing shareholder wealth.

Given the reforms introduced by the Tax Cuts and Jobs Act of 2017, US technology companies can repatriate their overseas cash and use it for business growth.2 Q1 and Q2 2018 earnings reports indicate that companies are actively planning to repatriate cash for a variety of reasons: repurchasing shares, spending on facilities and/or capital expansion, repaying debt, and for pursuing acquisitions. Our analysis suggests that share repurchases continue to top the agenda for several technology companies; across industries, buybacks could reach $1 trillion in 2018.3 Using cash for buybacks can improve shareholder return in the short term, although research shows that the return on investment varies widely.4

When developing a “cash strategy,” US technology companies should balance short-term financial goals and long-term competitiveness. Some companies’ strong cash positions could allow them to pursue both objectives simultaneously. Others may have to choose between using their cash to reward investors now or to reward them later by investing in R&D, talent, and technology—the foundations of new business models and future growth. Now or later? For many tech companies, this is the trillion-dollar question.

This charticle authored by Karthik Ramachandran on September 28, 2018.