Waiting to pounce? has been saved

Waiting to pounce? has been removed

With cash from tax reform, companies could be lying in wait for the right tech targets

Tax reform gave many global tech companies a cash windfall by allowing them to repatriate profits from foreign operations at a lower tax rate. This puts the large tech companies in prime position for mergers and acquisitions (M&A).

We’ve seen a surge in total M&A deal value in the US technology industry during 2018, driven largely by a handful of big acquisitions. But we haven’t witnessed the spike in the number of transactions one might expect. That may be due largely to the perceived lack of quality assets available, or assets priced right. But if history is a guide, companies may be waiting to pounce—the way they did after the last big US tax reform legislation in the mid-1980s. 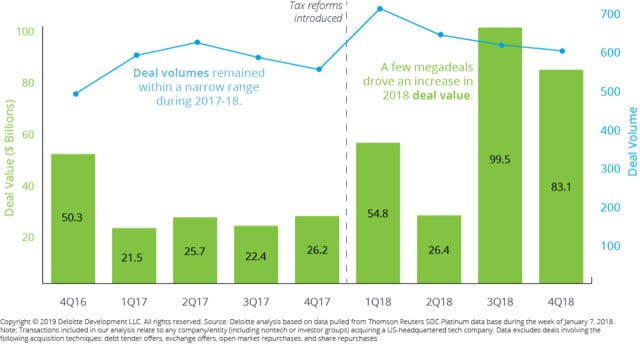 Undistributed corporate profits (cumulative retained earnings) in the US technology, media, and telecommunications (TMT) industry reached $467 billion as of Q3 2018.1 However, although there was no dearth of cash resources, the volume of M&A deals in the technology industry increased only 7 percent in 2018 versus 2017.2 And, were it not for a handful of megadeals in 2018, M&A deal value in the industry would have remained in line with 2017 levels.

Bruce Gribens, partner, Deloitte Tax LLP, noted one possible cause of this limited M&A activity: “The parachute that keeps M&A somewhat in check is lack of quality assets”. Moreover, a Deloitte survey of executives identified high valuation multiples as another obstacle for M&A during 2018,3 as valuations of US small- and mid-cap technology companies have continued to soar.4

A tight market for quality assets and share buybacks5 have played a role in dampening the M&A market. But M&A may simply take time after tax reform. Consider the 1986 US tax reforms, which radically altered the US corporate tax landscape. Research reveals that after those tax reforms were introduced, M&A activity rose during 1988–89, indicating a lagged effect.6

A Deloitte survey of corporate executives revealed a positive outlook for M&A activity in 2019. The TMT industry was the most optimistic, with 73 percent of its respondents anticipating that deal sizes would grow in 2019 versus 2018.7 As seen after the 1986 tax reform, it can take time to repatriate cash, and to select M&A targets once they have cash in hand.

Nevertheless, time is not on the side of tech companies. Joost Krikhaar, principal, Deloitte Consulting LLP noted that “companies do not have the luxury to contemplate what to do with the increased financial firepower for too long.” With the relentless pace of technology innovation and disruption, TMT companies continue to make rapid strategic bets in high-growth areas such as robotics and autonomous technologies, blockchain, augmented reality, and artificial intelligence.8 “Preserving cash positions has never created lasting competitive advantage, while R&D investments and bold bets in products and go-to-market models have,” he added.

This charticle authored by Karthik Ramachandran on May 30, 2019.

'Shorts' are long on value for consumers and advertisers

Briefings on hot topics in mergers and acquisitions