Artificial intelligence 'ventures' beyond Silicon Valley has been saved

Artificial intelligence 'ventures' beyond Silicon Valley has been removed

Silicon Valley continues to dominate the venture investment activity of technology, media, and telecommunications (TMT) companies in the field of artificial intelligence (AI). At the same time, as AI funding continues to rise, the corporate venture arms of TMT companies have started to look beyond Silicon Valley to invest in AI startups.

Between January 2013 and September 2018, TMT companies’ venture funding for AI startups was estimated at $3.7 billion,1 with Silicon Valley dominating the share of total funding. Nonetheless, a closer look shows that some of these corporate venture arms are setting their sights beyond Valley as AI startups sprout across the United States. 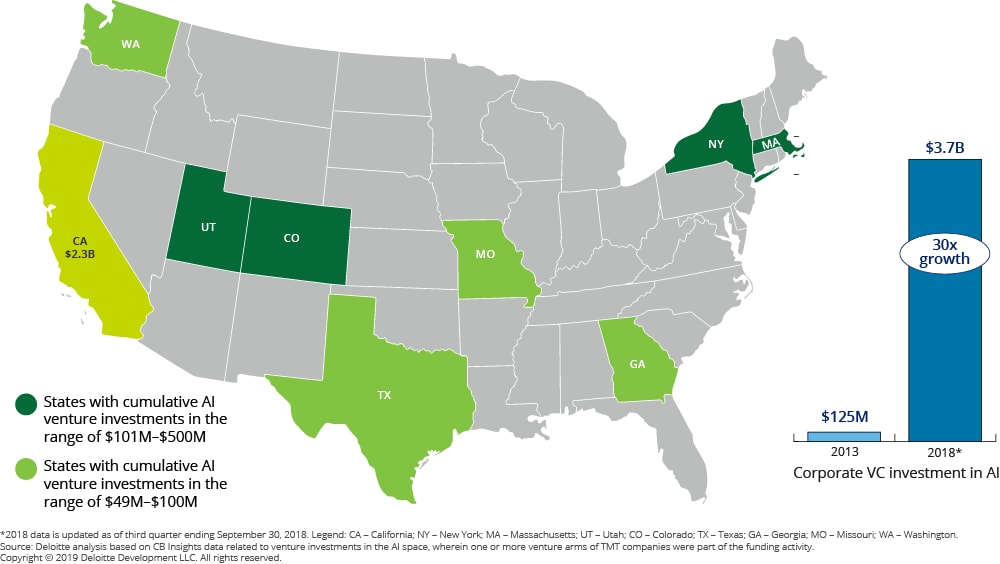 Venture investments in artificial intelligence startups continue to grow in the United States. To gain a better perspective about how TMT companies have invested in AI startups, we analyzed 258 AI venture funding activities of TMT companies and their corporate venture arms between January 1, 2013, and September 30, 2018. We found that California continues to be the leading hub, with cumulative investments pegged at $2.3 billion—a whopping 63 percent of total AI venture investments in the United States ($3.7 billion) during that period.2

However, as talent and operating costs continue to skyrocket in the Silicon Valley, AI startups are emerging across the United States.3

Thanks to a supportive ecosystem that provides access to investment and talent, New York, Massachusetts, Colorado, and Utah have become hotbeds for AI startups.4 In addition, Texas’s “together we win” policy,5 support and backing of Georgia’s local universities,6 and the state-operated Missouri Innovation Fund7 are examples of how other states are striving to attract AI startups.

The rise of new AI startup hubs is evident from Deloitte’s 2018 North America Technology Fast 500, an annual ranking of the fastest-growing North American companies across diverse industries. “While Silicon Valley continues to lead in creating innovative, fast-growing companies, we also see entrepreneurs from across the United States joining in to nurture the next generation of fast-growing companies by driving innovations in artificial intelligence, predictive analytics, and robotics,” said Mohana Dissanayake, partner, Deloitte & Touche LLP and industry leader for the Technology, Media & Telecommunications (TMT) industry, within Deloitte’s Audit & Assurance practice.

As we found from Deloitte’s State of AI in the enterprise, 2nd edition survey, early adopters of AI remain enthusiastic about its potential, and are actively ramping up investments and launching more initiatives.8 A few tech majors have started investing in AI startups that are based in emerging hubs.9 More TMT companies should embrace the opportunity. The steady rise of emerging AI hubs presents a viable option for TMT companies to make strategic bets, which—when executed with discipline—can strengthen their long-term competitive advantage.

This charticle authored by Karthik Ramachandran on January 17, 2019.

For more than 20 years, Deloitte has recognized the fastest-growing public and private technology companies in North America. These tech companies are on the cutting edge and are transforming the way we do business. 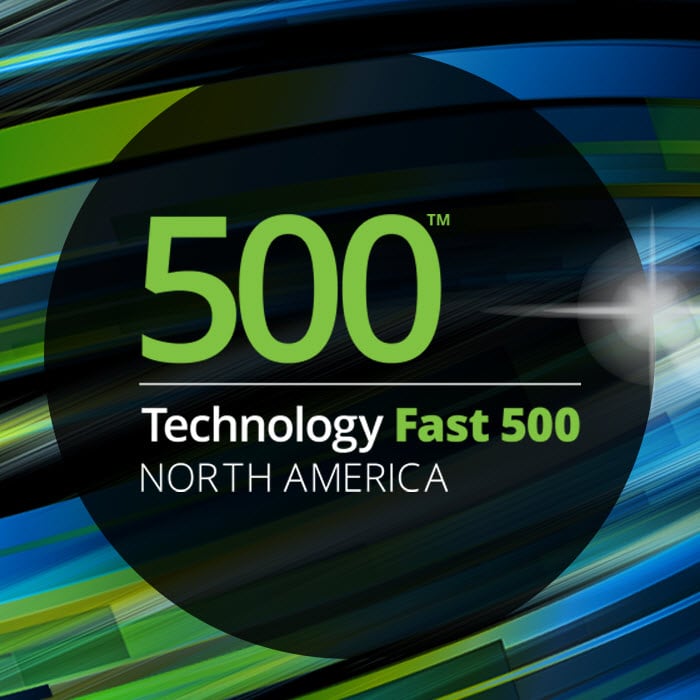 State of AI in the enterprise, 2nd edition

In our second annual survey, early adopters remain bullish on cognitive technologies’ value and are ramping up AI investments. But questions linger about risk management—and about who at the company will push projects forward.

Read more about the current state of AI.

Innovation in the cloud

Issues for CIOs: Living up to expectations

How can CIOs best balance their own priorities and the expectations of the business?