I listen to a lot of music, but I’m generally a late adopter when it comes to the technology side. In the 1980s, I didn’t even own a CD player…or a Walkman! I only started experimenting with streaming services about 18 months ago. Like a lot of people, I’m listening to more music than ever, and I’m paying virtually nothing for it. Music consumption jumped 23% between 2017 and 2018 and increased another 14% in 2019, according to Nielsen Music’s annual report. This trend is being driven by streaming services. Last year, US audio and video on-demand streams topped 1.15 trillion.1 Streaming services have made it ridiculously easy (and cheap) for consumers to access any kind of music they can think of…wherever and whenever they want it. This model has dramatically changed how revenue is generated.

Will hospitals go the way of the record store?

Twenty years ago, most of us purchased music at record stores, and we generally listened to that music in our cars or through bulky electronic devices (remember boom boxes?). In 1999, Napster introduced the idea of sharing digital audio (MP3) files between computers. While the company didn’t last long, the ability to download music paved the way for streaming services, which has completely altered the music industry’s business model. Today, most of the music we listen to comes through streaming services that didn’t exist 20 years ago. As I noted in a prior blog, record stores—once a staple of every shopping mall—are nearly extinct.

Consumers no longer rely on record stores to gain access to the world of music. Similarly, since the COVID-19 pandemic began, many consumers have discovered the value of virtual health, which allows them to meet with a clinician without ever leaving home. In a recent blog, Kulleni Gebreyes and I noted that many of the services historically performed by physicians can now be done by tech-enabled patients. This allows physicians to spend more time working at the top of their license and less time on making routine diagnoses.

As people grow more accustomed to the convenience of virtual health, services such as virtual triage and digital monitoring will likely become more common. Consumers will begin to expect it. Rather than going to a doctor’s office or hospital, patients might check into the digital equivalent from their home. While hospitals will continue to exist in the future, there will likely be fewer of them. World-class facilities will continue to treat patients who have complex care needs. Other hospitals could become smaller but more specialized. We expect that most of the winners in this future of health will be innovators from outside of the health care space that grew up with digital as part of their DNA and are focused on improving the consumer’s experience.

Interactions may soar, while prices plummet

CDs and cassette tapes were once responsible for most of the revenue generated by the music industry. Consumers bought 10 or 12 songs at a time—even if they only wanted two of those songs. The digitization of music made it possible for artists to release one, or two, or 12 songs at a time. Now the consumer decides what they want to hear. Streaming services, which didn’t exist 10 years ago, have hundreds of millions of subscribers and now generate nearly 80% of all US music industry revenue.2 For less than the cost of one CD, streaming subscribers can access virtually any type of music with a couple taps or a voice command.

Similarly, I expect that revenue generated by the health system will plummet in the future. Consumers might be connected to always-on sensors that continually monitor their health and alert them to potential health issues long before symptoms appear. As a result, fewer expensive late-stage procedures would be needed. We might not even be aware these micro-interventions are taking place. A micro-intervention is a prompt to take an action (or stop an action) that doesn’t require tremendous investment, energy, cost, or focus. It’s micro in the sense that it’s less arduous, less invasive, less caustic than a typical medical intervention. Micro-interventions can encourage consumers to make a behavioral, lifestyle, or other health-related change to maintain health and/or prevent disease. As I mentioned in a past blog, a smart toothbrush might detect the early stages of a disease, which could encourage the user to make a lifestyle change or seek treatment. Wearable devices, or sensors embedded in our clothes, might detect dehydration or vitamin deficiency.

Americans currently see their doctor an average of four times a year, and they experience about 0.5 health-related micro-interventions every day, according to Deloitte estimates.3 By 2040, we expect the typical American will have 77 daily health-related micro-interactions each day, while spending less time interacting with their doctor. As I noted in my June blog, it will likely become increasingly difficult for analog businesses like hospital systems and physician offices to thrive in a digital world. 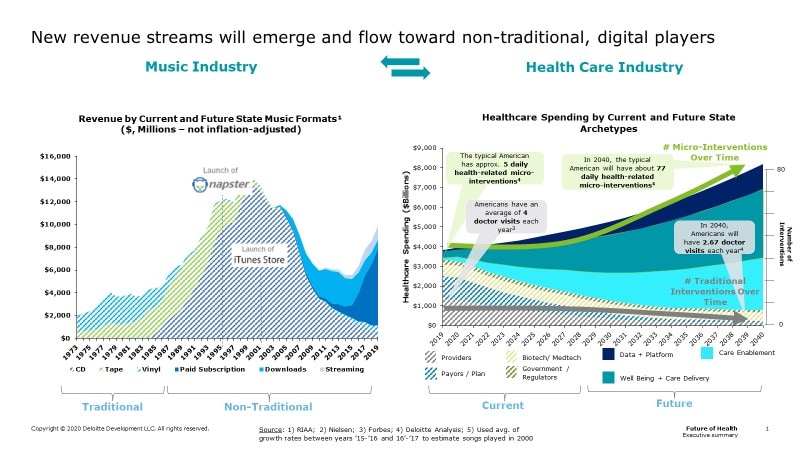 Physicians could have more time for their art

Sales of physical music (e.g., albums, CDs) have dwindled over the past two decades while streaming has soared. Twenty years ago, CD sales were lucrative for artists, but streaming services typically pay artists just $0.006 to $0.0084 per song streamed. To generate revenue, many musicians have begun to focus on their artistry to ensure live performances bring in fans and revenue.

Physicians will likely have fewer face-to-face visits with their patients in the future, and health spending will likely shift from expensive reactionary care to inexpensive early detection and prevention. As digital tools become more sophisticated, and personal health data generated by devices becomes more granular, the artistry element and quality of care delivered by clinicians could be elevated. Physicians of the future will likely spend less time treating routine illnesses and will be able to dedicate more time to patients who have complex health needs. As patient volume exits the system, there will likely be less need for physicians who provide routine care. While we might not need as many physicians in the future, those who remain should be able to dedicate more time to more complicated health needs. They can have more time to practice their art.

Are incumbents ready to face the music?

It has been more than a year since we outlined our vision for the future of health. Many of the changes we are beginning to see in the health sector have already played out in other industries—particularly music, which has become highly consumer-centric. Streaming services continue to reinvent the music industry, as my colleagues Kevin Downs and Shashank Srivastava noted in a recent paper. Since the COVID-19 pandemic began, some streaming services have been hosting live concerts—and are helping artists fundraise.

In the health sector, few senior executives possess the foundational technology background that will likely be needed to thrive in the future. They often don’t understand the changes that are taking place all around them, and they also don’t recognize the opportunities in front of them. They might not fully understand how consumer preferences are changing. The organizations that are able to disrupt industries tend to be those that discover new ways of doing business—rather than finding success within an existing framework.

iTunes Store is a trademark of Apple Inc., registered in the U.S. and other countries. Health Forward is an independent publication and has not been authorized, sponsored, or otherwise approved by Apple Inc.

3. Annual micro-interventions estimates are based on average number of people per US household (2.54); average number of connected devices per household (11); approximate number of connected devices that are health related (21% of Americans use fitness trackers according to Pew Research, January 9, 2020); approximate number of health-related notifications per device, per day (https://techxplore.com/news/2019-08-apple.html); average number of times Americans visit the doctor each year (https://www.forbes.com/sites/niallmccarthy/2014/09/04/americans-visit-their-doctor-4-times-a-year-people-in-japan-visit-13-times-a-year-infographic/#333cfab7e347). Deloitte made annual growth-rate assumptions for device usage and traditional doctor visits per year.

Neal Batra is a principal in Deloitte’s Life Sciences and Health Care practice focused on business model and commercial operating model innovation, redesign, and transformation. He heads Deloitte’s Life Sciences Strategy & Analytics practice, leading the way on next-gen enterprise/functional evolution by connecting strategic choice with analytics and technology. Batra has more than 15 years of experience advising health care organizations across the ecosystem on critical strategic challenges, including leading businesses in biotech, medtech, health insurance,  and retail health care. Batra is the coauthor of Deloitte’s provocative Future of health point-of-view, speculating on the health care ecosystem in 2040 and the business models and capabilities that will matter most. Batra lives in the Tribeca neighborhood in New York City. He holds an MBA from London Business School and a BBA from the College of William and Mary.