Examining the capital cycle of US midstream oil and gas companies

The entire capital cycle of the oil and gas midstream sector has come into question, leading to a large-scale exit of retail investors due to negative returns.

Most signs point toward an impressive growth story unfolding in the US midstream sector. With more than $670 billion in enterprise value (as of mid-2018), midstream is already the largest pure-play US oil and gas (O&G) sector—surpassing upstream, and reaching twice the size of oilfield services and three times the size of the refining sector.1 And with drilling and production in US shale plays still expanding, it would seem that midstream, a crucial player in shale’s success story, is poised for bigger wins.

Curiously though, this is not how the story is playing out. Investor returns from the sector are trailing behind the broader market, and midstream companies (barring distribution, which is also coming under pressure) have generated a negative price return of about 18 percent since 2017.2  While skimming the surface reveals some issues, it may be worthwhile to drill down deeper into the fundamentals—specifically in terms of how the industry is sourcing, investing, and distributing its capital.

A closer look suggests that the traditional capital model of externally funded growth, investment in assets that typically had a similar and predictable risk and return profile, and growing shareholder return primarily through high distributions is confronted by the shale-led infrastructure boom. What could be a way out of this capital conundrum?

In this paper, we set out to examine this challenge and suggest next steps across the capital value chain to help midstream companies restore investors’ confidence and position themselves strongly for profitable growth. Given how much of the upstream sector’s success tends to ride on the midstream sector, it is important that midstream companies focus on a multipronged strategy for success—both for themselves and their shareholders.

A golden age for US midstream?

The US midstream sector has taken a mainstream role in the shale era as upstream growth is increasingly becoming dependent on infrastructure availability. Capacity additions are currently lagging in meeting producers’ takeaway needs by about 9–12 months or more.3 Shale producers in the Permian, for example, have 300,000 barrels per day to ship, but are unable to do so because of the lack of pipeline infrastructure (as of October 2018).4

The lack of midstream infrastructure, or bottlenecks, is apparent from high price differentials in key basins and price hubs, which, in some cases, have gone up to 25 percent of oil and gas prices.5 The Midland-Cushing WTI spread, for instance, crossed $15/bbl in July 2018 while the Appalachian-Henry Hub natural gas price spread crossed $1/MMBtu in 2017.6 These high spreads are a result of higher upstream growth and lower midstream investment during 2014-2016 (figure 1).7

Although midstream companies do not usually realize these windfall spreads, as a large part of their sales are contracted and fee-based, these high spreads confirm that the industry is in the midst of its best years of growth and profitability cycle. With the Energy Information Administration (EIA) projecting US upstream volume growth of 14 percent in 2018 and 8 percent in 2019, this infrastructure and price gap could take time to rebalance, especially when growing exports of crude oil, refined products, natural gas, and natural gas liquids (NGLs) create a need for new pipeline routes in the United States.8 Shouldn’t this be a golden age for US midstream companies and their investors?

However, the story isn’t playing out as expected; in fact, the sector has significantly lagged the broader market in generating investor returns over the past two years. Why? Deloitte’s analysis suggests that there are fundamental issues in how the sector is managing its capital. Can midstream companies with returns on capital lower than their cost of capital and a high dividend yield of above 10 percent outperform the market? Are midstream companies following the basics of delivering value growth and maintaining capital discipline or, in simple terms, displaying greater stewardship of capital from sourcing, to investing, to distribution? 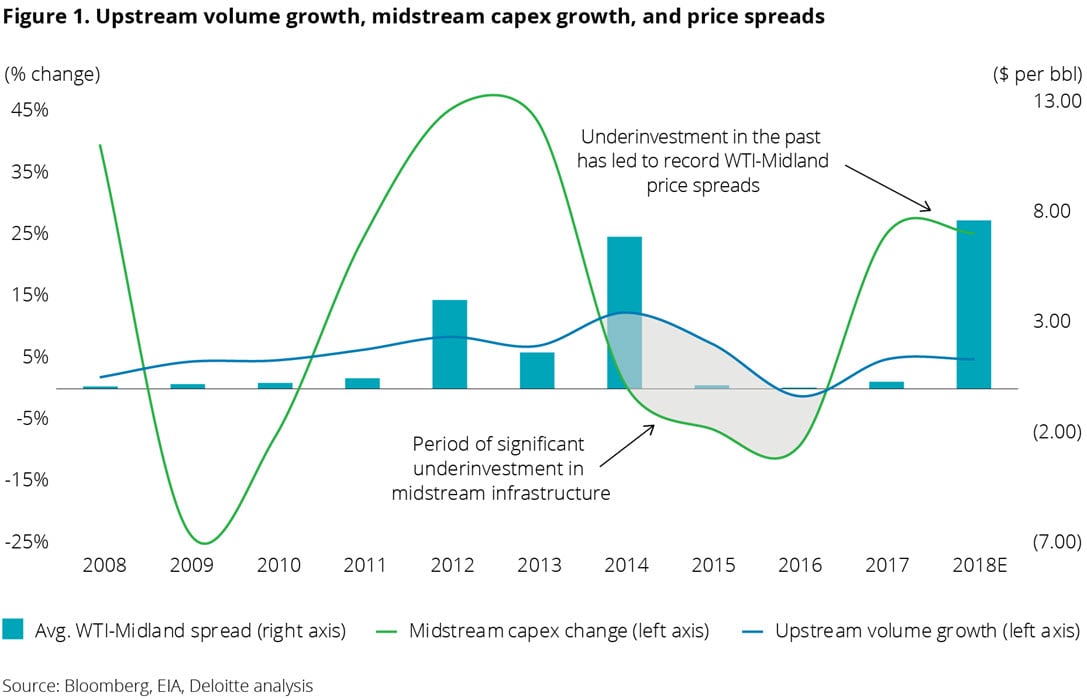 1 Data from CapitalIQ and Deloitte analysis, accessed on October 1, 2018.

The rise of the midstream